We had the worst experience possible on our 2nd overnight train. It was from Nha Trang to Danang and we realised how spoilt we’d been with the previous VIP class train.

The cabin wasn’t that much smaller but if it was any smaller it would be called a rabbit hutch. At first it was dimly lit with a lamp and although this was quite annoying because we couldn’t see, it was better than when we finally found the light switch and the bright hospital style lighting. We could suddenly see how filthy the cabin was and we all began to itch. The mattresses were filthy the sheets we were given were stained and covered in long hairs. There was a small space at the top of the cabin for bags but it had a thick layer of dirt including a CupaSoup with a thick layer of mould in it and a half eaten corn-on-the-cob with a huge cockroach munching on it. There were ants and mosquitoes and cockroaches everywhere.

The cabins were horrible so unsurprisingly I was pretty worried about the toilets. Most toilets in Asia were squat toilets that we eventually got used to and were actually better because they were cleaner. No such luck on this train. There was a Western toilet that was blocked and filthy so it was full to the brim and sloshing around and splashing out of the bowl.

I didn’t drink another thing for the whole of the journey so I wouldn’t need to use the toilet again and I had a packet of Oreos and Pringles for dinner. I went to bed armed with bug spray and an impenetrable silk sleeping bag liner.

I lay awake for hours that night while the whole train chugged along and I imagined cockroaches scurrying all over me. I couldn’t stop itching all night and I was freezing cold but didn’t want to go anywhere near the dirty quilt.

The train rumbled and chugged along all night and I could actually feel my lungs rattle and had to make a real effort to stop my teeth from clanging together.

I was amazing to wake up alive the next day and even more amazed that I only had a few bites. Unfortunately, in my sleep, I’d wrapped myself up the stinking blanket and felt itchier than ever. We’d slept fully dressed so we were off the train in seconds and virtually ran away from it to the bus.

We headed to Hoi An and arrived at a really nice hotel. We were too early to check in so we lazed around reception with everyone stretched out in weird positions around their backpacks in a useless attempt to get comfy on a tiled floor.

As usual, it was raining, something we’d started to get used to in Vietnam, so we went for a swim in the rooftop pool.

It was nice to be in the warm water while the air and the rain was so cold but it meant that it was too cold to get out so we stayed in there for hours splashing around.

We’d heard rumours that a typhoon was coming but thought nothing of it, even when the guys from the hotel were tying things down and hammering shutters closed. The sky was turning a dark shady of scary grey and the wind was whipping up the water as we swam. The doors of the rooftop were slamming and there were metal plates on the roofs around us that were clanking loudly as they came loose and the heavy wooden deck chairs around the pool were being swept around the rooftop. 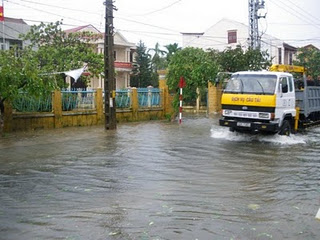 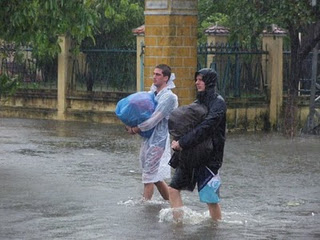 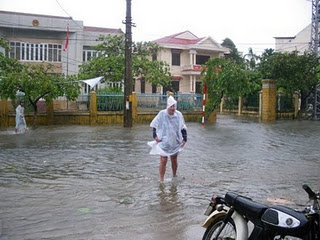 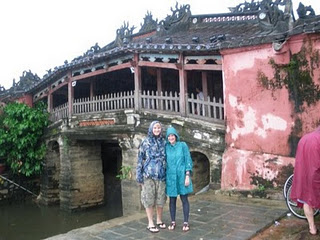 I thought that it set the scene pretty well when Ross said, ‘This feels like the opening scene from a Final Destination film’. We then imagined all the ways we could be killed in a swimming pool when a typhoon hit; with the worst being the metal sheets flying off the roof next to us and slicing off our heads. It was around about this point that I decided it was definitely time to get out the pool.

We went to a bakery by the riverside and ate lots of pastries and drank lots of tea while watching the river rise a little too quickly. Dara gave us a tour of the town which is really pretty with tall, thin French colonial style buildings that are painted pretty pastel colours so it was a shame it was so gray and miserable.

Hoi An is famous for all the tailors that make perfectly fitting clothes for next to nothing. Rob bought a tailored cashmere suit with silk lining that cost about 40quid.

We were eventually soaked through and our feet were wrinkled in our flip flops so we waded back to the hotel until it seemed like an appropriate amount of time to go back to the bakery for more yummy food.

By the time we went to bed that night the street had flooded and was about 30cm high. The power in the city had cut off but our hotel was running on generators so it didn’t bother us and we were quite excited to see the flood riding. We went to bed like excited kids on Christmas Eve and couldn’t wait to see how high the floods were the next day.

travel , Travel Guide , UK , Wales
There are so many incredible hotels in North Wales but if you’re looking for something a bit different, I’ve found 10 unique places to...

A weekend in , Europe , travel , Travel Guide , UK , Weekend Escape
If ever there was proof that you don’t need to go far to find an exciting and memorable weekend getaway, Edinburgh is it. The...

A weekend in , Hotel Review , travel , UK
Bristol is one of the UK’s most vibrant and creative cities, with plenty to offer a weekend visitor. It’s full of history, bright street...

Blog
New Year’s Resolutions have had a bad rep for the past few years. The message that we’re...