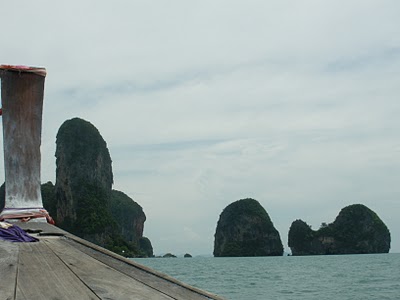 Railey Beach is treated like an island although it is joined to the mainland somewhere. It’s kind of separated in two; the west side was the typical, picture perfect postcard beach image and exactly how I imagined Thailand. The sea was clear blue, the sand was white powder and the beach was deserted. We pulled up to this side on the boat and I couldn’t wait to get in the sea. 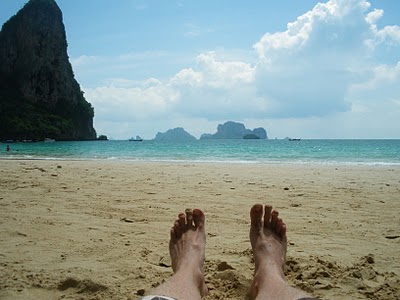 The west side was where all the fancy restaurants were and 5* hotels were hidden away in tropical gardens. Although you couldn’t see a lot, there was an air of classiness and people with money. The East side was the complete opposite; It was a 10 minute walk from where we were dropped off and there was a footpath that ran through the middle of the island. This was where all the backpackers stayed and although the beach wasn’t as nice and it was a bit cheap and dirty, it was still the best place to be. 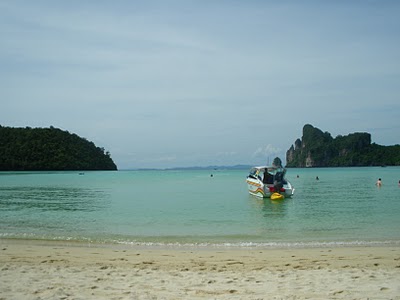 The hotels were cheaper and basic and we stayed in wooden huts that were tucked away into the rocks and trees. The bars were mainly wooden shacks with decking over the sea covered with rugs and cushions where people sat drinking cheap cocktails in the sun or later on by candlelight. 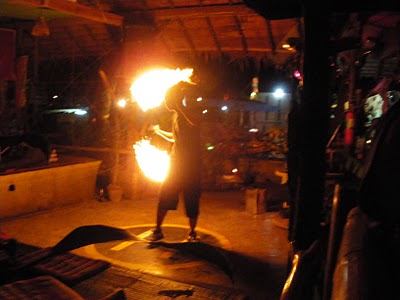 So we spent our days on the perfect beaches of the west side and our nights in the chilled out bars on the east side. It was here that we met an American couple who lived in Thailand and were covered in tattoos. As the guy got drunker, he got more and more generous and kept insisting on buying us more and more drinks. He disappeared at about 2am and was found later that night on the steps leading up to his hut, curled up in a little ball with his shoes placed neatly beside him.

I woke up the next day feeling vile; Chang really is the worst drink ever. My stomach churned, my head hurt, my wrist hurt. Hmmm. My wrist hurt? I raised my wrist above my head so I could inspect my wrist without having to move any body part that might result in being sick.

Arrhh. Then I remembered it all… including a trip to the tattoo shack at about 4am.

I’d had a tattoo of a small heart on a chain around my wrist. A young guy, a lot younger than me, had done it with a stick of bamboo and a pot of ink while I slurped from a whiskey bucket and lots of people watched so I thought I was on a version of Thai style Miami Ink.

We spent four nights on Railey Beach and spent most of that time sunbathing and swimming, eating and drinking. One day, we decided to be a little more active and dug out our trainers for a walk to a lookout point and a lagoon.

I thought that the trainers were probably a bit unnecessary but I’d been carrying them around with me for weeks so I wanted to get some use out of them. I later found out that they were very much necessary.

We walked to the end of the beach and through a rocky alleyway until we got to a rock face that we were evidently supposed to climb. There were a few ropes tied to the trees at the top that were there to help with the climb but I mainly used the tree roots that clung to the rocks to heave myself up. 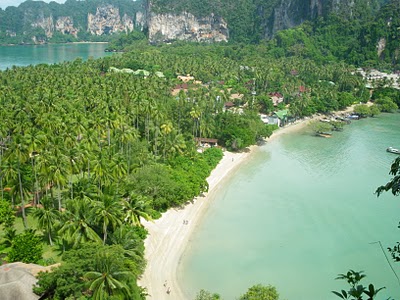 As we climbed, a family of little monkeys followed us from the trees. I felt like a total Heffalump as I struggled to climb up and the monkeys swung along beside us so easily.

The view from the top was definitely worth the tough climb as we could see both the east and the west side and for miles around as well. 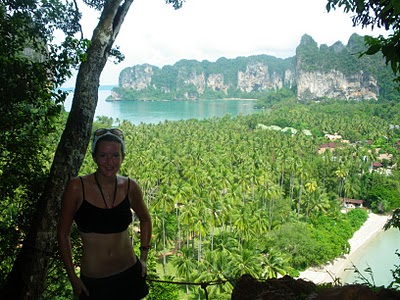 There was a lot of evidence at the top of the mountainy cliff that other people had attempted to do the climb in flip flops. Broken flip flops were buried in the mud and scattered around. Unfortunately, even my sensible trainers couldn’t cope with the climb to the lagoon. There was a cliff face we would have had to climb down that promised death if you fell so I decided to give it a miss and admired the blue water from the safety of the trees.

We left Railey Beach from the backpacker’s East side. It was abit scary as we had to wade out in the sea to the long tail boat. We slipped and slided along a concrete path that was under the water and the boats were waiting where the water was bout waist deep. I had horrible images of slipping and falling backwards due to the weight of my backpack, then drowning under the water because I would be like a ladybird that had fallen on its back and wouldn’t be able to get back up. This would usually be hilarious but under water I’m sure it would be a serious issue.

Once in the long tail boat we then sped out into the sea where we waited for the ferry to Phi Phi. The ferry was on a typical Thailand agenda, i.e., there wasn’t one. So we bobbed around in the middle of the sea for about an hour. All the while, a storm was brewing in the distance and there were two twisters that were slowly creeping dangerously close to our flimsy little boat.

The ferry finally appeared and we heaved our backpacks up to it and climbed aboard. We were herded to the front of the boat like cattle as it was filled to about 3 times over its actual capacity. We found a spot at the front and sunbathed and snoozed all the way to Phi Phi.

Thailand
Almost everyone who visits Bangkok ends up going to Tiger Temple and most people aren’t entirely sure how they feel about it.
Laos travel
It was my birthday while we were in Vang Vieng and we spent a few days here celebrating. Vang Vieng is like backpacker central...

Blog , travel
I’m disregarding all those people who advise: “Don’t do too many New Year’s resolutions, you’ll never stick to them all.” This year I’m taking the...