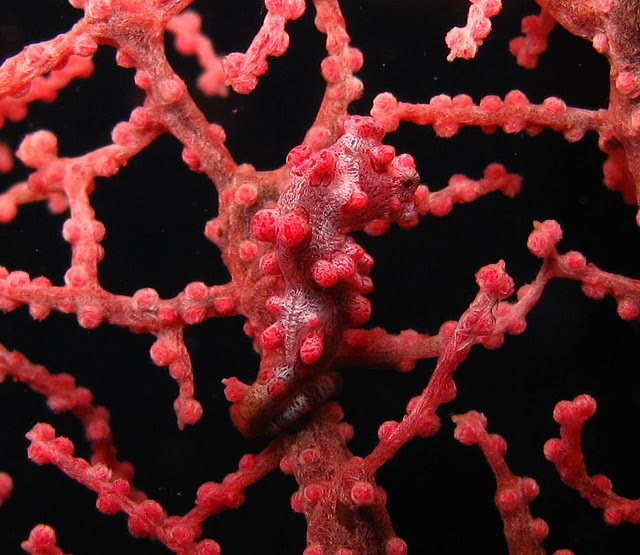 It was another first in terms of our diving experiences, well two really because it was a shore dive and also a shipwreck. I really enjoyed doing the shore dive. I was a bit nervous because we’d read things online about how difficult it is getting in and out of the water because you have to climb over all these rocks while wearing all your gear. I was imagining giant boulders that we’d be scrambling over and was really scared because I can barely stand when I have a tank on my back. I needn’t have worried though because there wasn’t a boulder in sight, just a pebble beach and a smooth, calm surface of flat, warm water.

We kitted up in the dive centre where a woman came and picked up our tanks and took them down to the shore for us. I felt terrible letting a woman do it who couldn’t have been much bigger than me. But I couldn’t believe my eyes when she lifted it up and balanced it perfectly on her head. Then it got worse. Our dive instructor then picked another tank and balanced it on top of the tank that she was already carrying! She carried 2 heavy tanks on her head all the way down to the shore. I can barely carry one tank on my back never mind on my head! 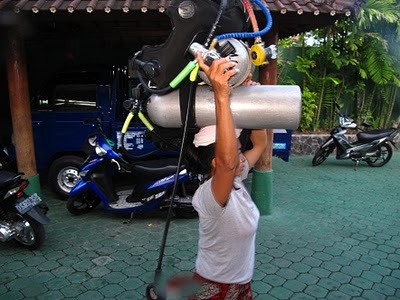 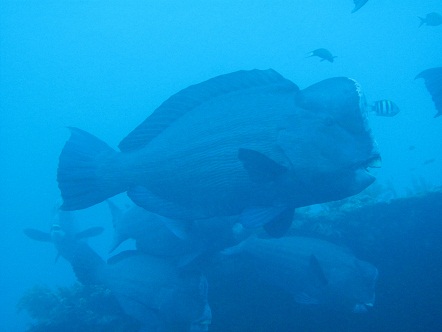 It was so overwhelmingly massive that I was a little shocked at first. We were at the back of the ship, almost on the seabed and looking up at the whole ship.  It was huge. We then swam around it to the right and there were just so many fish everywhere. Loads of the fish were massive too and really inquisitive; they’d come right up to my mask as though they were looking me right in the eye. There was a lot of beautiful coral and plants too. 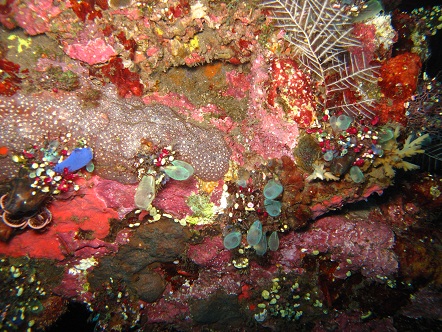 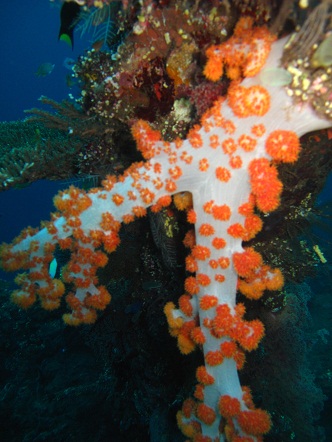 When we got almost to the back of the ship, we swam on top of it and then into what would have been the room where they steer from and you could still see the steering wheel. It was so strange to see something so manmade under the sea. Seeing the ship underwater didn’t really feel so unnatural because there was so much sea life that had interweaved itself around it and it seemed like it was meant to be there, but when I saw something like a ladder or a wheel, I really noticed how odd it looked. 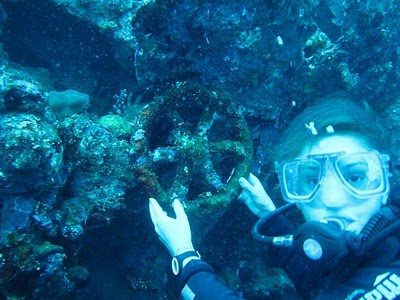 As the ship has decayed, little tunnels and cool swim though’s have been created and it was so amazing to swim through parts of the ship, especially when we looked up to the surface and you could see huge schools of fish through the gaps in the decaying ship. 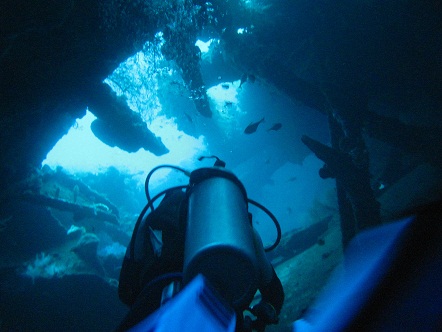 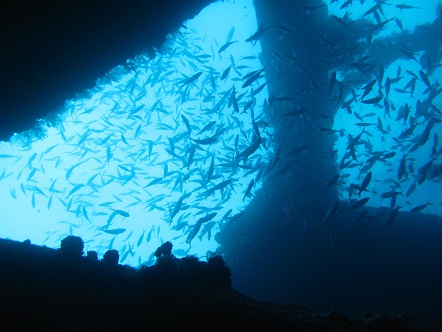 We passed by a huge Barracuda that must have been about 1.5 meters long. It was lurking in the shadows while being cleaned by some tiny little fish. It stayed exactly where it was but glared at us while he showed off his sharp set of pointy teeth. 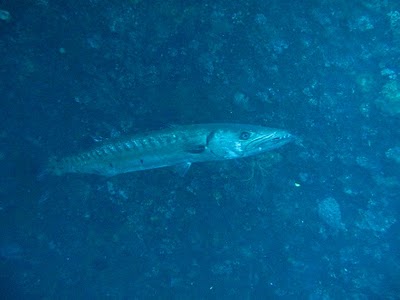 My favourite part of the dive was probably as we came up, but not because the dive was over. There was a huge school of Travelly fish and as we looked up it just looked like a huge white cloud that we swam through. I rested on the seabed as we did our 3 minute safety stop and it was really cool because loads of fish came to investigate and were swimming between my legs and inspecting my brightly coloured fins. 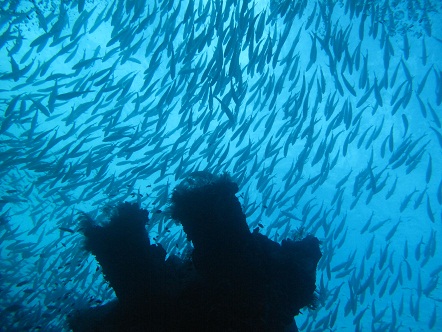 How we did it…
We dived with a company called Tulamben Wreck Divers who I would definitely recommend. Our guide was  great, the equipment was fab (best wetsuit I’ve ever had!) and the shop is just across the road from where you enter the water. 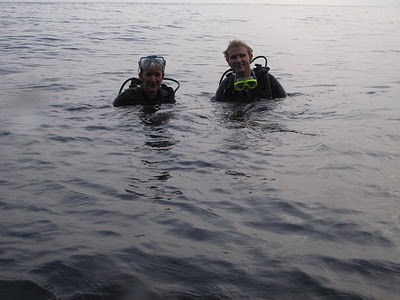 We also stayed in the accomodation behind the shop and this was gorgeous. We’ve been flashpacking a bit recently but it was worth it in Tulamben. Tulamben is lovely but there is literally a handful of dive shops and about 5 restaurants, so its nice to have a good place to stay and relax while you’re not diving. We were the only people staying there too so we had a huge pool and about 15 staff all to ourselves! 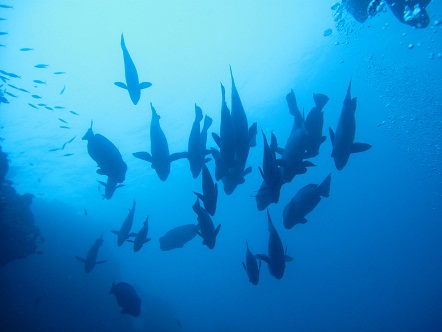 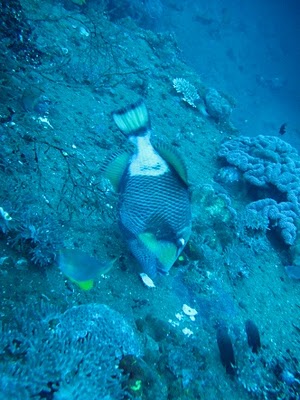 A mini travel guide to Bali

[...] you want a diving experience like no other then head to the east coast to Tulamben to dive the USAT Liberty Shipwreck. The water here is calm and warm so it’s perfect for beginners and you can dive right into the [...]

[...] the baton from Vicky Flip Flop and without further ado, here are my top 3 travel memories:1. Scuba Diving the USAT Liberty Shipwreck in BaliSince the moment I learnt to scuba dive in Australia I’d been desperate to dive a shipwreck [...]

Sounds like a pretty cool dive. I hoped to do a wreck dive now that i am here in Philippines, but didn't end up going anywhere with wrecks. Did see the biggest school of sardines I've ever seen thou, it was awesome.