It isn’t very often that you find a book you love so much you buy a copy for your friends before you’ve even finished it. You’re not buying an extra copy because you’re Little Miss Moneybags or flashy like that, it’s because you don’t want to share the copy you have and risk never seeing it again.

This book, of course, is The alchemist. I’m not going to tell you what the book is about because the storyline doesn’t do it justice. I’m simply going to select a few quotes from the book that I love. I hope you love them too and they make you stop for a few moments and think about them:

“It’s this: that at a certain point in our lives, we lose control of what’s happening to us, and our lives become controlled by fate. That’s the world’s greatest lie.”

“If someone isn’t what others want them to be, the others become angry. Everyone seems to have a clear idea of how other people should lead their lives, but none about his or her own.” 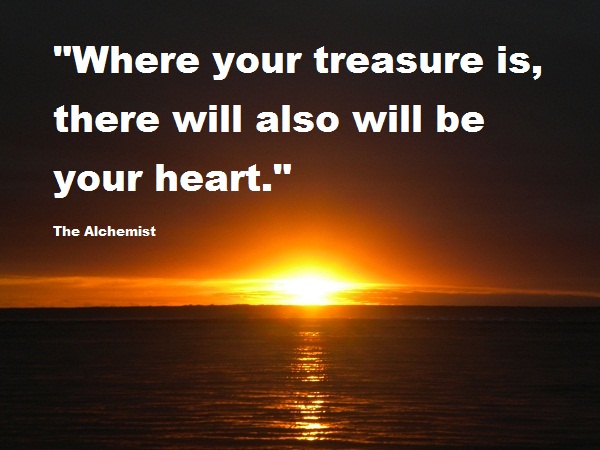 “Naturally (your heart) is afraid that, in pursuing your dream, you might lose everything you’ve won.”

“Well, then, why should I listen to my heart?”

“Because you will never again be able to keep it quiet. Even if you pretend not to have heard what it tells you, it will always be there inside you, repeating to you what you’re thinking about life and the world.”

“You mean I should listen even if it’s treasonous?”

“Treason is a blow that comes unexpectedly. If you know your heart well, it will never be able to do that to you. Because you’ll know it’s dreams and wishes, and you will know how to deal with them.”

“You will never escape from your heart. So it’s better to listen to what it has to say. That way, you’ll never fear an unanticipated blow.” 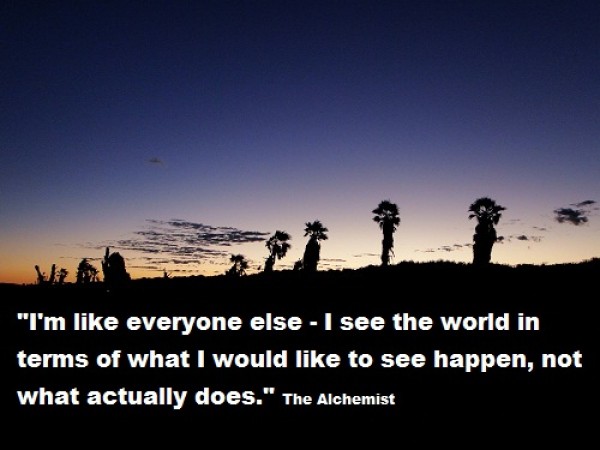 “Everyone on earth has a treasure that awaits him. We, people’s hearts, seldom say much about those treasures, because people no longer want to go in search of them. We speak of them only to children. Later, we simply let life proceed, in its own direction, towards its own fate. But, unfortunately, very few people follow the path laid out for them – the path to their destinies, and to happiness. Most people see the world as a threatening place, and, because they do, the world turns out, indeed, to be a threatening place.

“So, we, their hearts, speak more and more softly. We never stop speaking, but we begin to hope that our words won’t be heard: we don’t want people to suffer because they don’t follow their hearts.”

“Why don’t people’s hearts tell them to continue to follow their dreams?” the boy asked the alchemist.

“Because that’s what makes a heart suffer the most, and hearts don’t like to suffer.”

From then on, the boy understood his heart. He asked it, please, never stop speaking to him. He asked that, when he wandered far from his dreams, his heart would press him and sound the alarm. The boy swore that, every time he heard the alarm, he would heed its message. 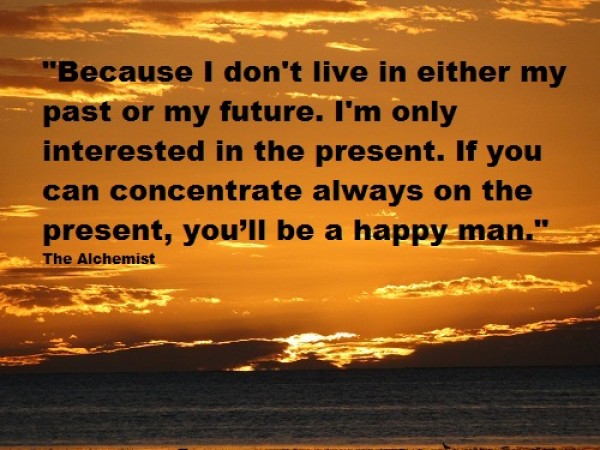 How not to live your life

“I’m going to become bitter and distrustful of people because one person betrayed me. I’m going to hate those who have found their treasure because I never found mine. And I’m going to hold on to what little I have, because I’m too insignificant to conquer the world.”

The boy knew that in money there was magic; whoever has money is never really alone.

If you’ve never read The Alchemist by Paulo Coelho, I can’t recommend it enough. It’s not a self-help book or anything like that, it’s just the kind of book that will make you stop and think about your life and the decisions you’re making. If you’re anything like me, a bit of a traveller and a bit of a dreamer, you will love this book!

Hi, I would like to ask your permission, I copied one of your photo attached it in my book review. I love how you put on this kind of stuffs that's why I also made a review :)

Hi Janine, provided the image is properly credited with a link back to the blog then that's fine.

it is the best read, an amazing book..i just keep reading its quotes again n again..n u r absolutely ryt..everyone should own this book..

Although it is not my favourite book I do love this book and guess what? I gave it to a friend to read it and have never seen it again... In desperate need of a new copy =)

I've never read The Hobbit but it's been on my bookshelf for a while so I might give it a go. I'd never thought about it as the kind of book to inspire a bit of wanderlust so thanks for the suggestion!

Oh I've been looking for a few new reads! I've never liked fictional and always go for books that make you think differently and help you be a better person. This one sounds like worth the read :)

Let me know if you decide to read it and how you get on Cristina. I hope you like it!