Rebecca Sharp from Almost Ginger shares her top things to do in Valletta, the capital city of Malta. This beautiful walled city is a World Heritage City and a European Art City and is well known for all its incredible churches museums and palaces. 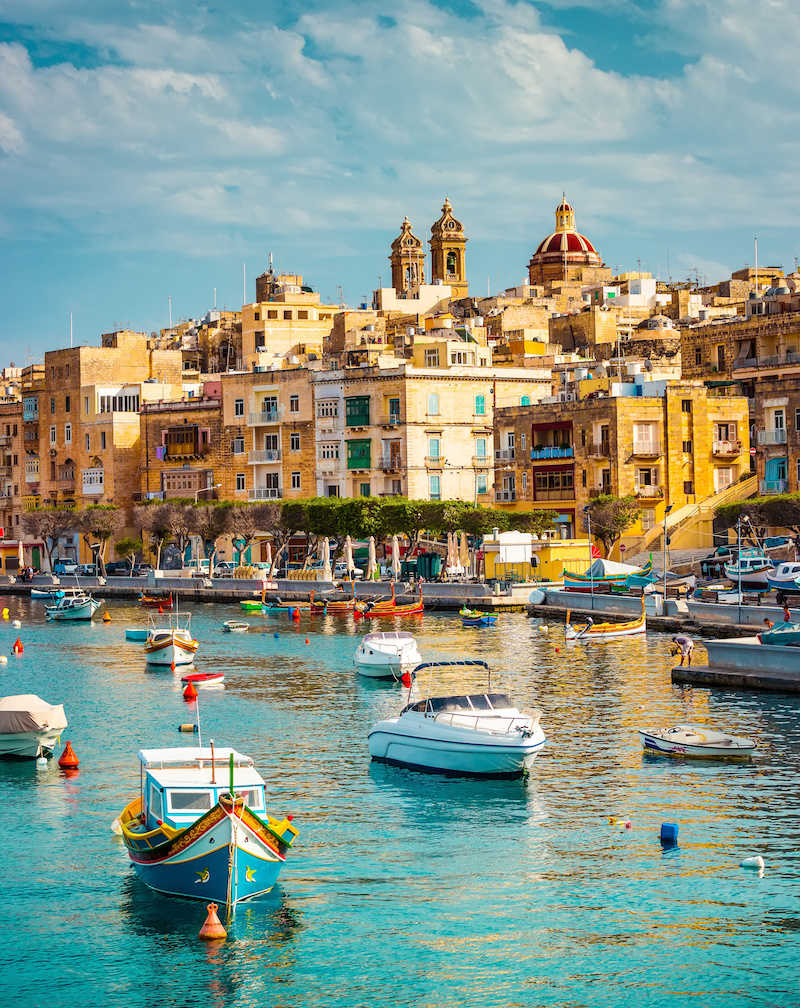 Valletta is one of the smallest capital cities in Europe, not to mention one of the most breathtakingly picturesque. Stretching a tiny 1km long by 600m wide, you might be surprised to find there are plenty of things to do in Valletta for such a small city. In fact, I’d say Valletta is only going to increase in popularity with tourists who are seeking an abundance of historical sites and the best restaurants and bars all within walking distance. The climate is pretty incredible, too!

The trouble with city breaks in big cities like Rome or Paris is that I end up with a list of sites, museums, restaurants and activities that make accomplishing everything I’d like to do impossible in one weekend. I end up saying “I’ll do that next time” but the truth is I’d rather see new places. With somewhere like Malta, it is completely realistic to experience all the best things to do in Valletta in a short space of time, at a leisurely pace.

With Valletta being 2018’s European Capital of Culture, there’s never been a better time to visit Malta’s capital city. Here are all the top things to do in Valletta including the beautiful historical sites that helped the entire city become a UNESCO World Heritage site as well as the new modern touches which make Malta’s capital city a true up-and-coming place to visit.

If you like to explore alone but love having the knowledge of a guide then I highly recommend this audio guide for Valetta. You download it and listen to it on your phone so you can explore at your own pace but it’s like having a guide in your pocket! Much better than reading from a guide book and nicer than joining a big group tour!

1. Marvel at the Valletta City Gate and new Parliament building

Valletta certainly knows how to make a good first impression. I still remember the first time I saw the imposing city walls and tall, striking gate. It was like entering an ultra-modern medieval city, if that makes any sense at all.

Valletta’s city gate, walls, Royal Opera House and Parliament building (which both sit just behind the gate)  were all designed by Italian architect Renzo Piano in 2013, making use of Malta’s abundance of limestone. There has been some criticism of the untraditional facades from locals but, personally, I like the idea that Valletta is developing its own identity. 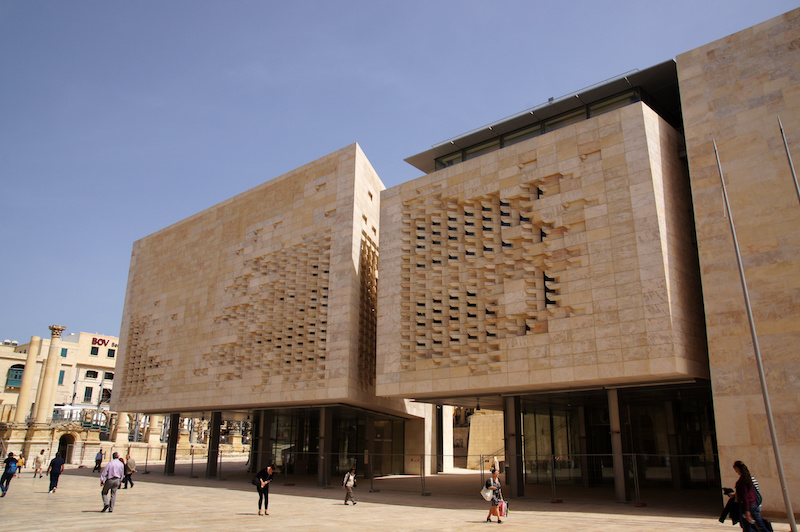 2. Enjoy the views across the water at the Upper and Lower Barrakka Gardens

Two beautiful parks are situated along Valletta’s east coast and they’re great places to take a break from the cobbled streets and enjoy the views across the water to Birgu. Sitting in either courtyard would list high on the most tranquil things to do in Valletta if it weren’t for one activity.

Every noon in the Upper Barrakka Gardens, officials in Military uniforms fire cannons to mark the time of day. For almost 500 years, the Saluting Battery has been used as a timekeeping device and to mark special occasions. The tradition continues as a way to commemorate the Naval forces that used to protect Valletta from various enemies approaching from the sea. 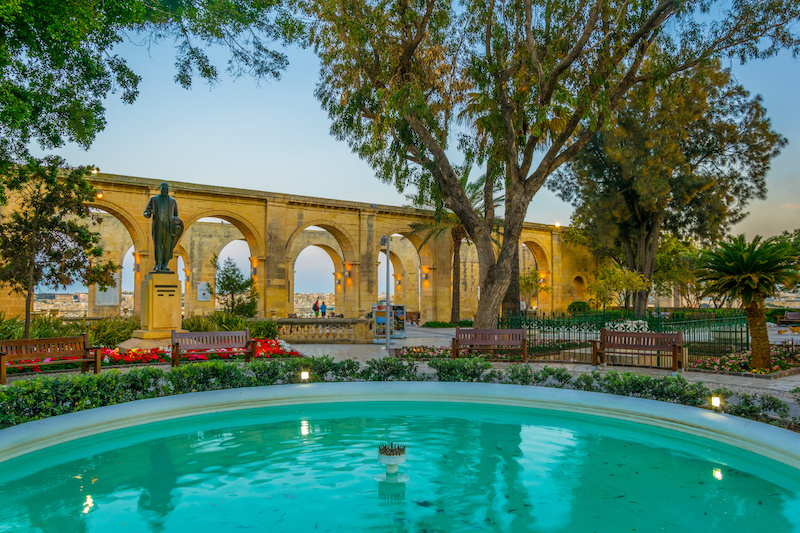 3. Wander through the limestone streets

Valletta is such a walkable city and it would be completely possible to walk up and down every single street if you wanted to! That gorgeous limestone brick can be found all over Valletta (and the rest of the country). You might notice the streets are on a grid system like New York City and it’s no coincidence. The long streets allow the sea air to travel around the city and let the light in around the tall buildings.

You might also notice that the houses tend to have brightly painted window boxes and doors. This has everything to do with the Knights of Saint John, a medieval military order in Malta who ordered that every street corner street should be decorated with shrines, statues or balconies. Most are still there today which doesn’t surprise me as why would you remove decorations when they look so pretty?!

If you’re short on time or love to learn more about a destination then why not take a walking tour in Valetta?

I’m a big fan of walking tours because you see so much more than when you’re wandering alone and this one is just £12. Book it for when you first arrive to help get your bearings and so you can quiz your guide on great places to eat and drink! 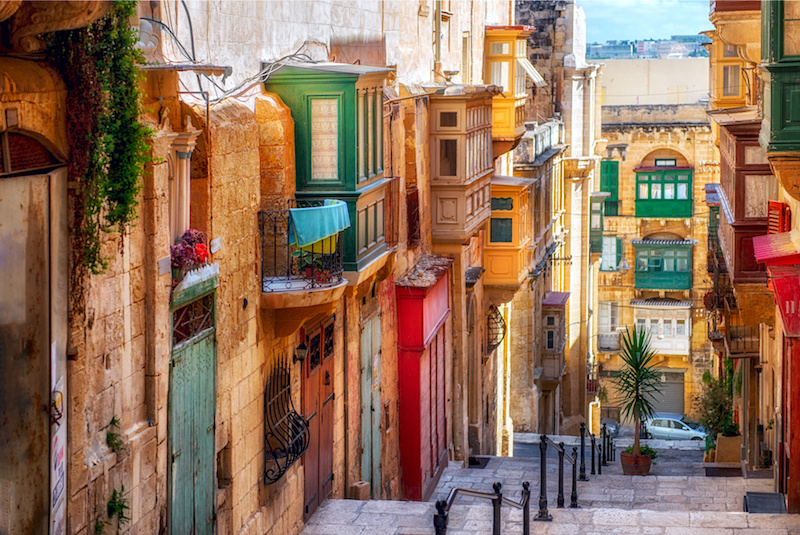 4. Check out the National Museum of Archeology

It might not be everyone’s cup of tea, but the archeological history in Malta is perhaps among the best (and oldest) in the world. So, if you don’t have time to check out the sites themselves around the rest of Malta, then a trip to the National Museum of Archaeology should be high on your list of things to do in Valletta.

The museum features artifacts from the Hypogeum (an underground crypt) in Paola from 3000 BC and the Megalithic Temples. If you’re a pre-history nerd then consider this the best place in Malta to get your geek on! Tickets cost no more than €5 per person.

Nowhere else has a military history like Malta, and especially Valletta. Over the last 1,000 years Malta, has been under the rule of everyone from the Romans to the Spanish, the French and finally the British until they finally gained independence in 1964.

Many forts were built in and around Valletta to help protect the city and country from potential conflict. The National War Museum is housed in a beautiful old fort covering all Maltese conflicts from 2500 BC and the Bronze age, the Order of St John’s Catholic Military right up to World War II. It’s an incredibly interesting exhibition, and Malta’s historical conflict with other civilizations is so surprising considering its size. Entrance fee is a maximum of €10 with many concessions.

What would a trip to a European country be like without visiting the top churches and cathedrals in the country? St John’s Co-Cathedral – named because it shares duties with St Paul’s Cathedral in Mdina – looks pretty inconsequential from the outside. However, inside is decorated with artwork, marble and gold from head to toe.

Travel Hack Tip: Like many cathedrals around Europe, all visitors need to cover their shoulders and knees. The Cathedral offer wraps to help with the shoulders but you might want to wear trousers or a long skirt. Unique to St John’s, they have a no-high heels policy as they damage the marble floors.

7. Take a cruise around the city

Surrounded by water and small, charming towns on either side, taking a short cruise around the city is one of the most relaxing things to do in Valletta and a great way to learn about the city’s diverse past.

The history of Valletta revolves around it’s relationship with the sea whether that’s culture drifting in from Malta’s Italian and Tunisian neighbours, enemy ships meeting their match with Valletta’s many forts or the huge fishing industry.

Check out this Valletta and 2 harbours day cruise from just £13.77 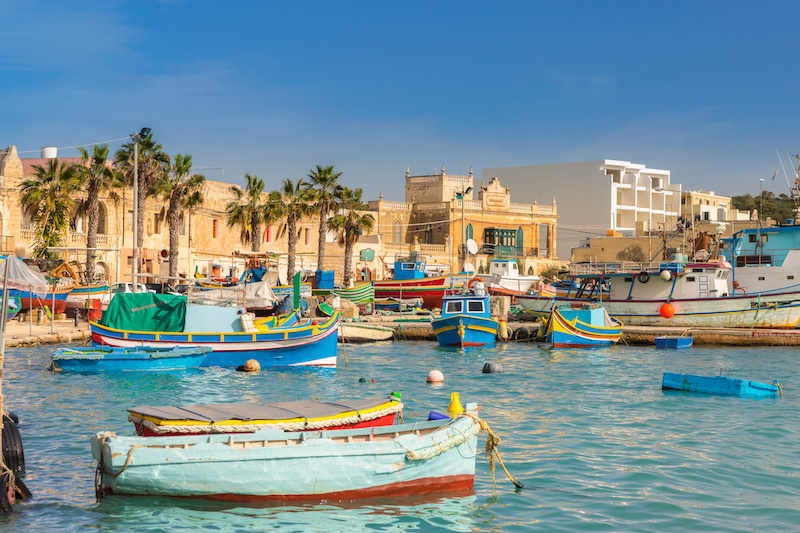 Strait street is the most thriving street in Valletta with so many restaurants serving the best cuisine, and the best Italian food in the country. There are so many first and second generation Italian-Maltese master chefs who want to prove that their Italian food is just as tasty and authentic as it is in Italy.

I’m no expert, but the pasta is up there with the best I’ve ever tasted! Papanni’s is consistently rated the best Italian restaurant in Valletta, but I visited Trattoria Romana Zero Sei and it was pretty delicious.

9. Enjoy a beer or cocktail at Valletta’s best bars

One of the best things to do in Valletta, a city that is usually warm until the wee hours, is to sit outside drinking a cocktail or cold glass of beer watching the sun go down over the sea.

The best place to sit outside and grab a cocktail is Café Society, a bar with a bit of a hipster vibe but they really know their cocktails. Right down the street is Bridge Bar, which is also great for cocktails.

For craft beer lovers, I would have to recommend Wild Honey which, again, has a hipster vibe but has a huge selection of beers from all over the world. 67 Kapitali is the best bar in Valletta for local beer as it’s one of the biggest stockists of Lord Chambray, Malta’s own craft beer.

10. Take a day trip to the Game of Thrones locations

And finally, every fan who visits Malta has to make an effort to visit the Game of Thrones locations! Many King’s Landing and Dothraki scenes from season one were shot all over the islands. However, filming was moved to Dubrovnik in season two when reports of damage to the natural scenery in Gozo surfaced.

Valletta is the perfect base to take a day trip to the filming locations. There are so many tour companies offering group and private trips, but this Game of Thrones filming locations tour in Malta is run by two former extras who take you to locations not open to the public. The tour starts from £50 per person with hotel pick-up, which is actually much more reasonable that some of the other Game of Thrones location tours on offer from Valletta.

Those are the top 10 things to do in Valletta! What things would you like to to in Malta’s capital city?

Read Rebecca’s other blog about Mdina in Malta: How to spend one day in Mdina, Malta’s Silent City

This guide to Valletta was written by Rebecca from Almost Ginger, a blog about Rebecca’s love for travel and films with helpful travel tips and information about film locations, festivals and screenings. 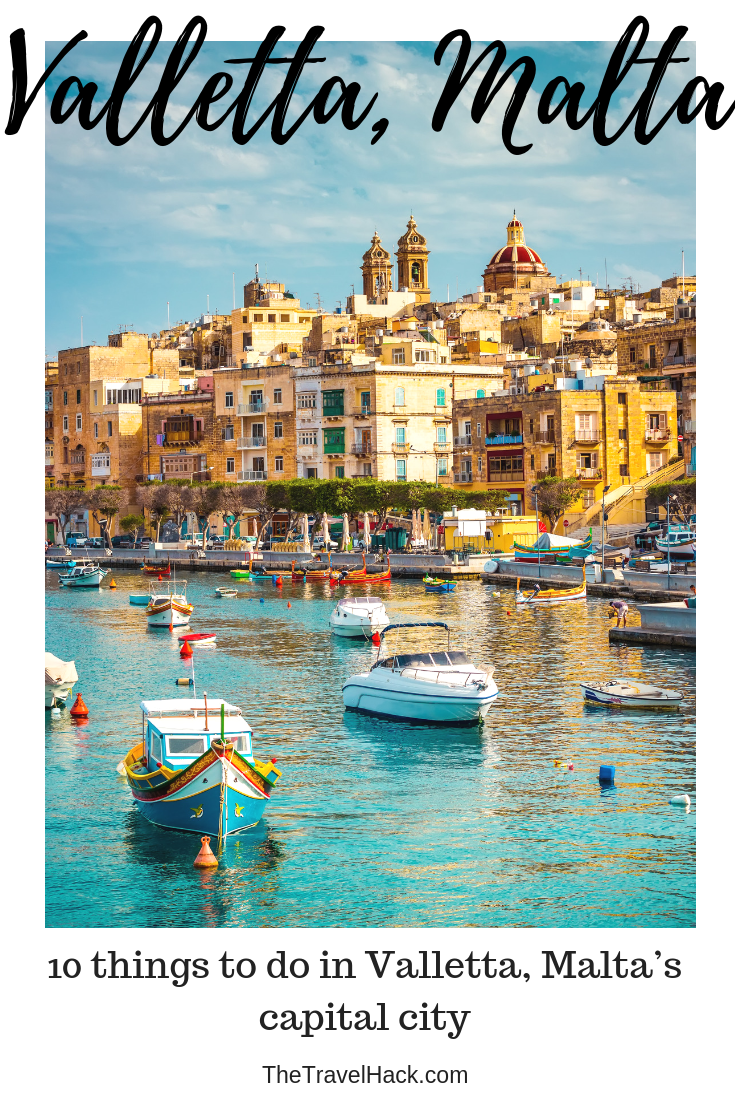 The cathedral and museum are definitely two of my must-sees in Valletta, glad to see they made it on your top 10 list :)

Thank you for the tips! I am planning on going to Malta in May, super excited about exploring these islands!

Malta is a great place for everyone to visit in the world. I want malta only once, need to plan this year with my family.

Would love to go to Malta, it's on my travel bucket list!

What a stunning destination! My travel bucket list just gets longer and longer :)