We live in a world where everyone wants everything to be bigger, faster, stronger, brighter. We spend our lives consumed by wanting more and we’re programmed to spend way too much time and energy on achieving this unattainable ‘more’.

I know it sounds like I’m criticising these goals, and I guess I am, but I’m not going to pretend that I don’t want all these things too.

While I was backpacking around Australia and Asia, I led a very simple life. I had barely any possessions, just a few items of clothing and no techy devices to keep me entertained – just a handful of books I’d swap with other backpackers. But I loved it. I loved this simple way of life and it truly made me realise that ‘stuff’ doesn’t make you happy. ‘Stuff’ really just consumes your attention for a few weeks and keeps you busy enough to stop focusing on other areas of your life. And then you get bored of your stuff and move on to the next fad.

It’s nearly 10 years since Sam and I left for that big backpacking adventure and it’s hard to not get back into the normality of life and get sucked back into consumerism.

When we came home I spent years trying to avoid it. Years pretending to myself that I didn’t want any of this ‘stuff’.

I used to drive a tiny and completely impractical car, but it was cute and I liked it and I insisted I wasn’t going to upgrade it until it was so old the wheels were falling off. I didn’t want to get sucked into the trap of ‘keeping up with the Joneses’’ and buying bigger and better cars just because everyone else had them. I was happy in my little car and, yea, it might have been a squeeze from time to time but I could manage. And it was cheap! I’d fill up the tank for £40 and it would last me 2 weeks!

And then I went to a baby group with George and squeezed my car between about 20 shiny 4x4s. The other mums were hopping out of their enormous vehicles and they looked so glamourous and stylish and, well, successful. I felt like an idiot as I scrambled out of my little car and struggled to get the pushchair out of the tiny boot while baby crap was spilling out of every available space in the car.

Sam eventually persuaded me to get a new car – nothing mega fancy but it at least has enough boot space for a pushchair! And guess what, I love it.

I love having shiny, fancy new things. I love buying new clothes and new gadgets. I even love spending my entire evening researching new gadgets and looking for the next fad I want to obsess over.

I’m not completely slating consumerism because I’m a massive victim of it myself and I actually like being a victim of it.

But I also like having a break from it… 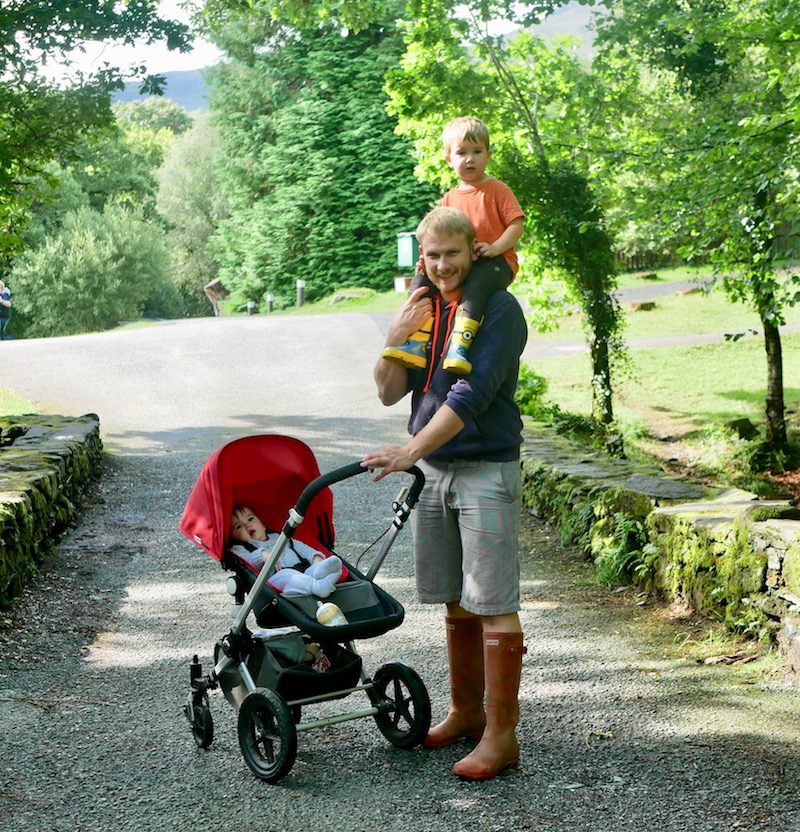 This is the reason why I love camping – and more recently, caravanning.

Sam and I went to Anglesey a few weeks ago (it was to take some photos for this post) and we met a guy who runs a campsite on the island.

“We have people coming from The Concrete Jungle,’ he said as he wafted his hand in the direction of the mainland as though ‘The Concrete Jungle’ was a mythical place he’d never actually been to. ‘They have their big houses and fancy cars and flashy jobs, but all they really want to do is be here.’ He pointed to the beach, where the waves were crashing in the distance and a dog walker strolled along the golden sand, then he nodded back towards a small and simple cabin. We’d just watched a family of about eight people file into the little cabin and their laughs and chatter could still be heard above the sound of seagulls and the fresh wind. It looked cosy and bright in there and I longed to have a peep inside and join them for a cuppa.

The family had three cars outside the cabin. Three cars that probably had a combined value of my entire house – yet they were choosing to come here, squeeze together and get back to basics in this little cabin.

‘They come here and they just…’ the campsite owner took a deep breath and then slowly and calmly let it out as though he was breathing out every thought and every worry in his mind. ‘…they just relax.’

And that’s why camping and caravanning is so awesome. You just relax. 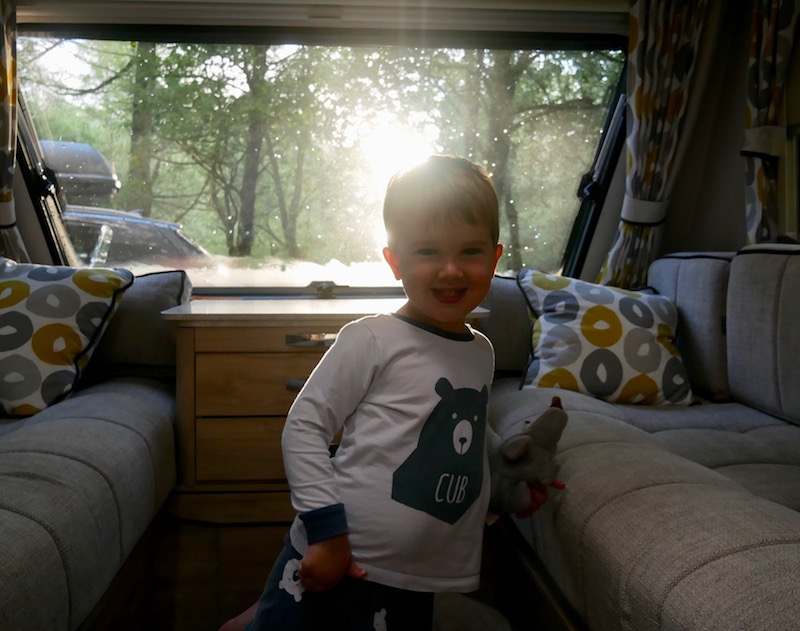 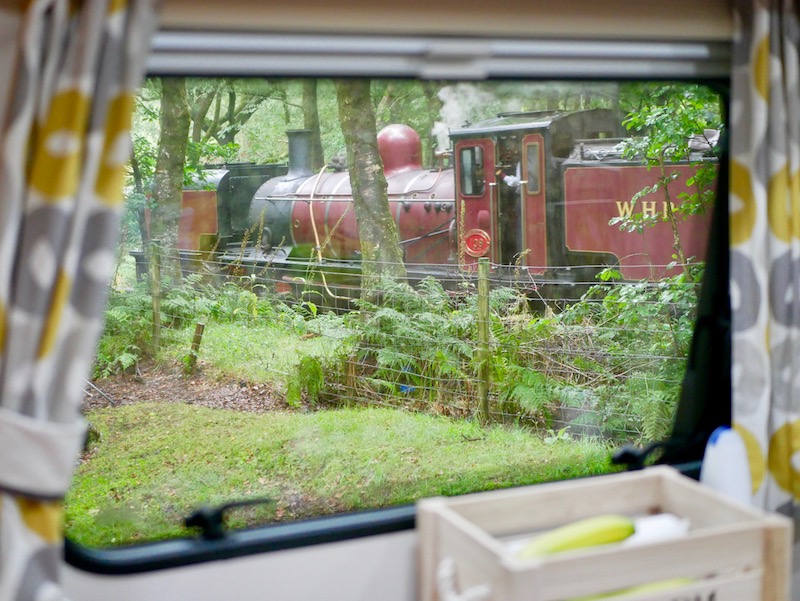 There aren’t many places you’d get a view of a stream train from your living room window! (Probably only good if you have a train-obsessed two year old!) 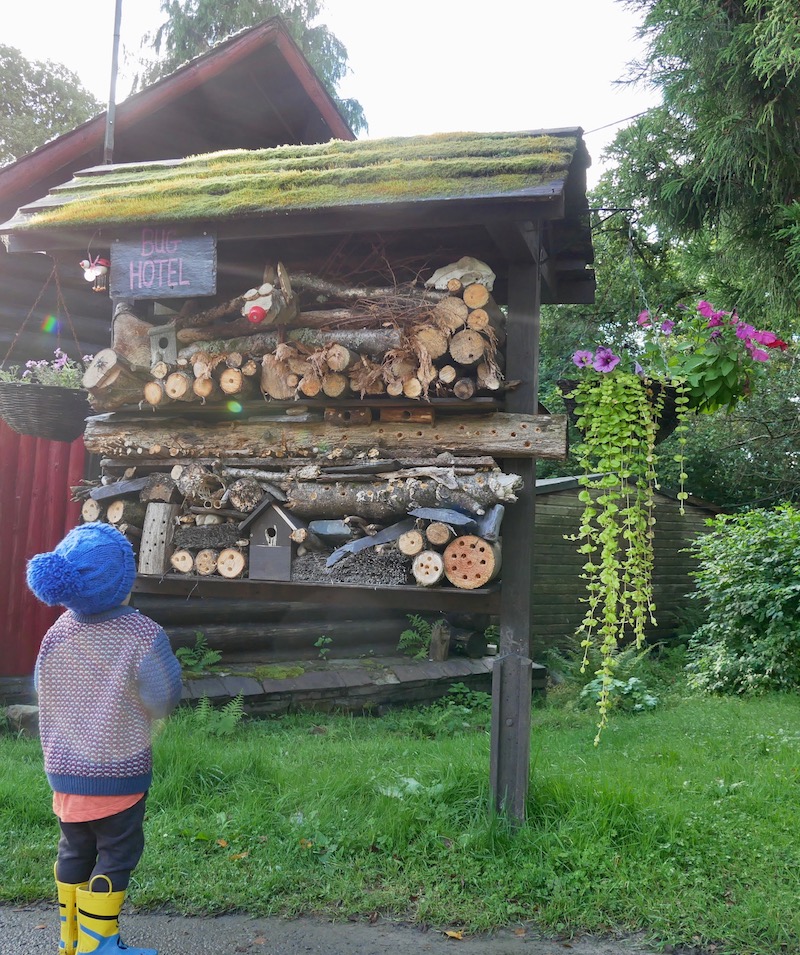 Checking out the bug hotel 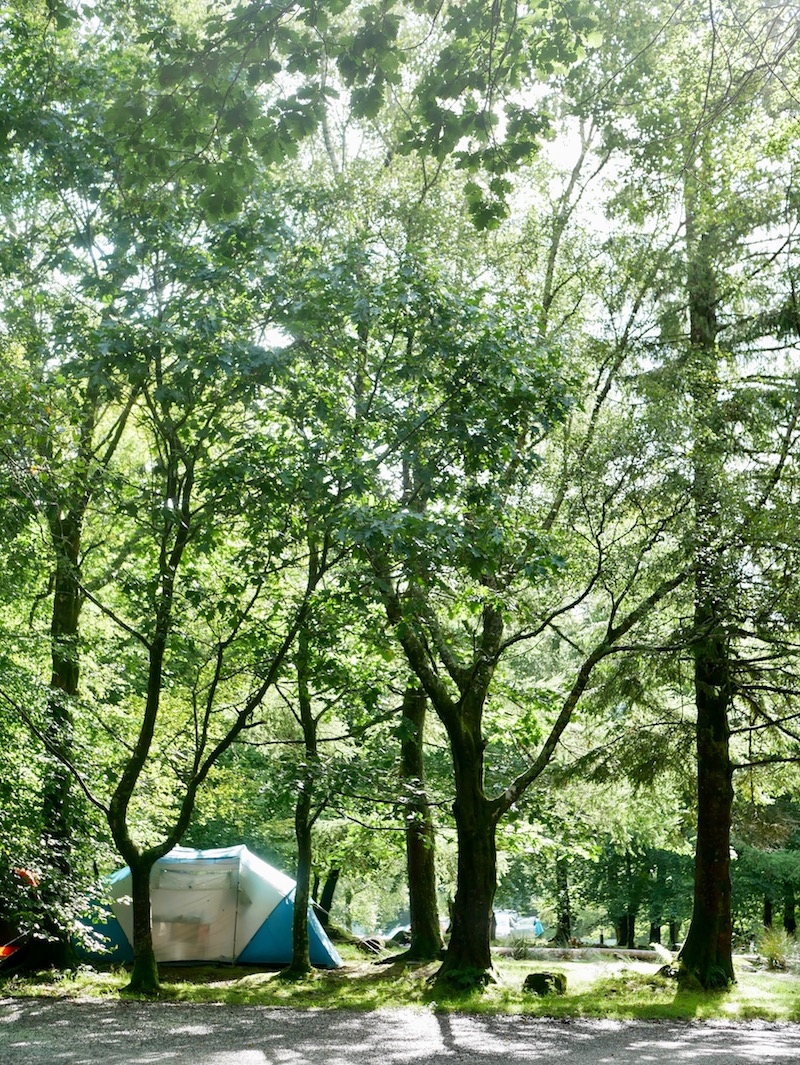 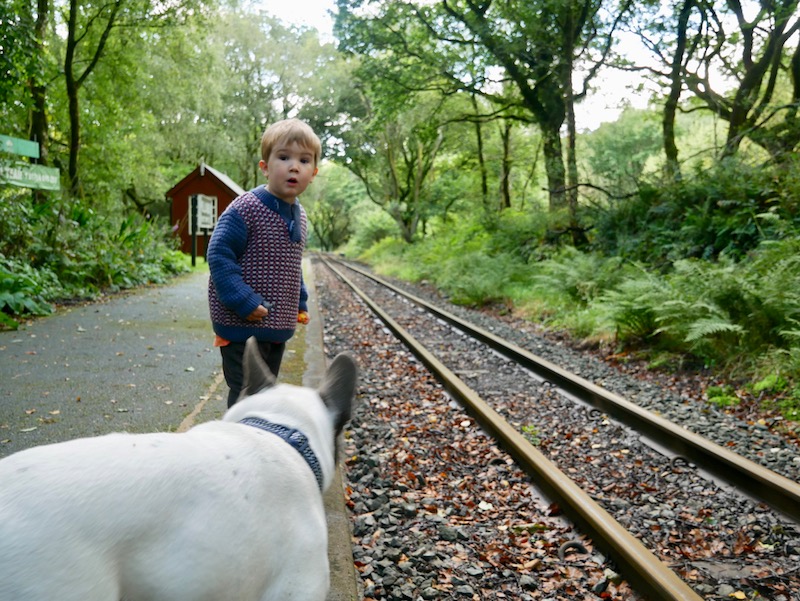 When I’m at home alone with the boys I feel like I spend all day just running around after them. I’m constantly making their next meal, cleaning up after the meal, tidying the house, doing other chores and then the cooking the next meal begins. Evenings are spent cleaning, tidying, organising, arranging and generally doing life admin. But you don’t have life admin when you’re camping!

Even when we’re in the caravan it takes us 10 minutes to clean it from top to bottom and then you’re left to do all the fun and important things you really want to do with your life.

I find it really ironic that we spend so much money making everything bigger and better, just to spend even more money on something smaller and shitter to escape from all the things that are bigger and better.

It’s stupid. I know it’s stupid and I don’t understand it either. Yet I still love it. 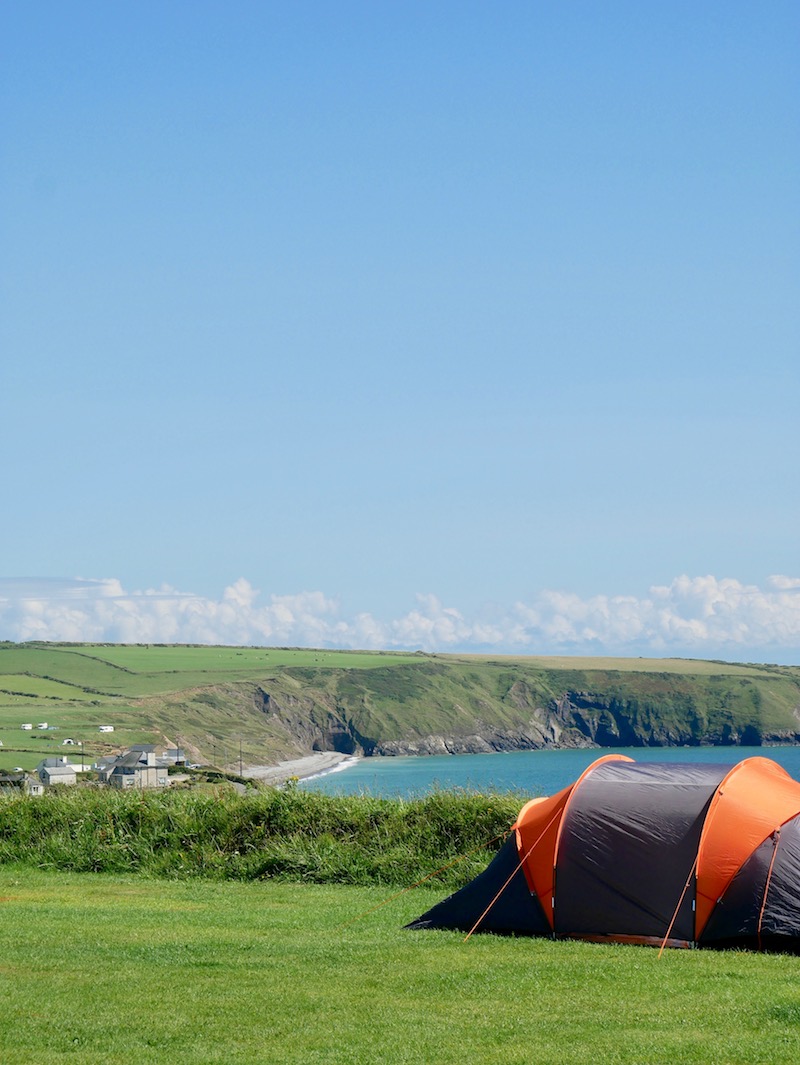 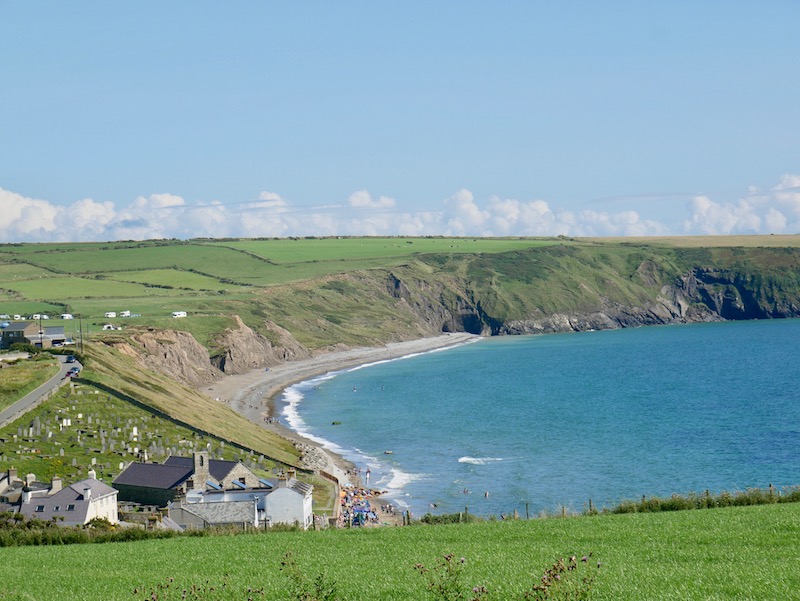 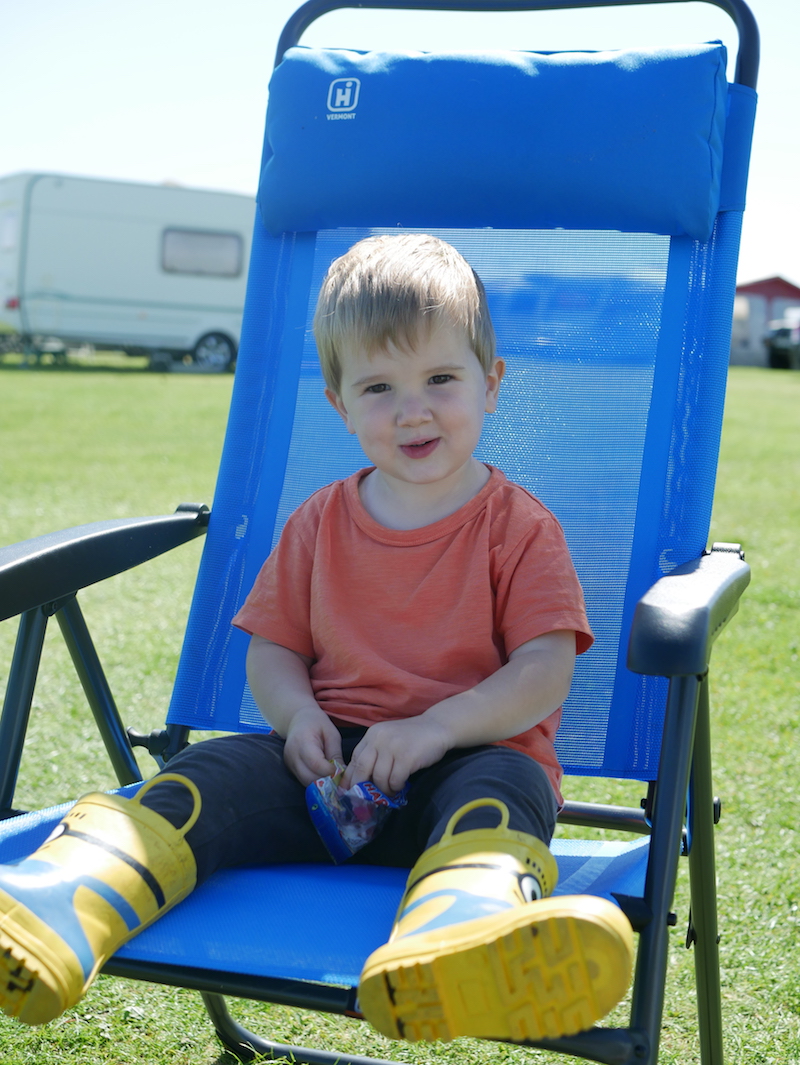 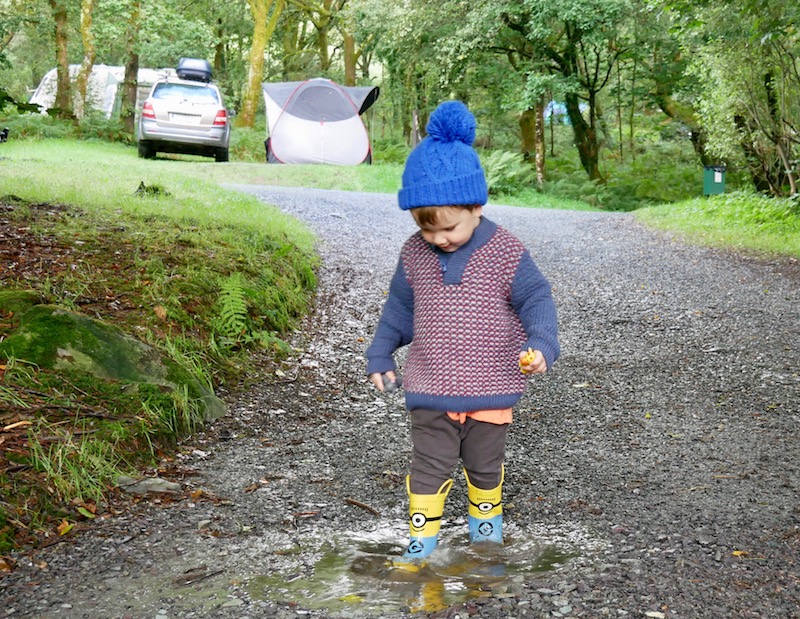 I love it when we’re in our caravan.

The boys only have space for a small box of toys, yet they somehow play just as nicely with 5-6 toys as they do with an entire house-full at home. The kitchen is tiny yet we eat better than we ever do at home. The beds are tiny and we’re all crammed into one space with the dog snoring, Joseph wriggling and George needing to get up for a wee every 3 hours – yet we all sleep so well! There’s nothing to do yet we’re busy from morning until night. There’s no where to relax, yet we’re more relaxed in the caravan than anywhere else in the world.

It’s our little home from home and I love it.

And then after a few days we start to get irritable with being so close. We want our own space and I want to have a shower without two children and a dog in the room with me! So we jump in the car and go home, back to that big TV and games consoles and fancy, state-of-the-art gadgets, a wardrobe spilling with clothes and cupboards filled with enough food to feed a small army. We go back to the more, more, more lifestyle, back to the rat race, back to the concrete jungle, back to normality.

And for a few weeks we love normality. We love over drinking, over eating, over spending and over thinking. But we love knowing that when it all gets too much, we can hop in the car and escape to a simpler way of life. 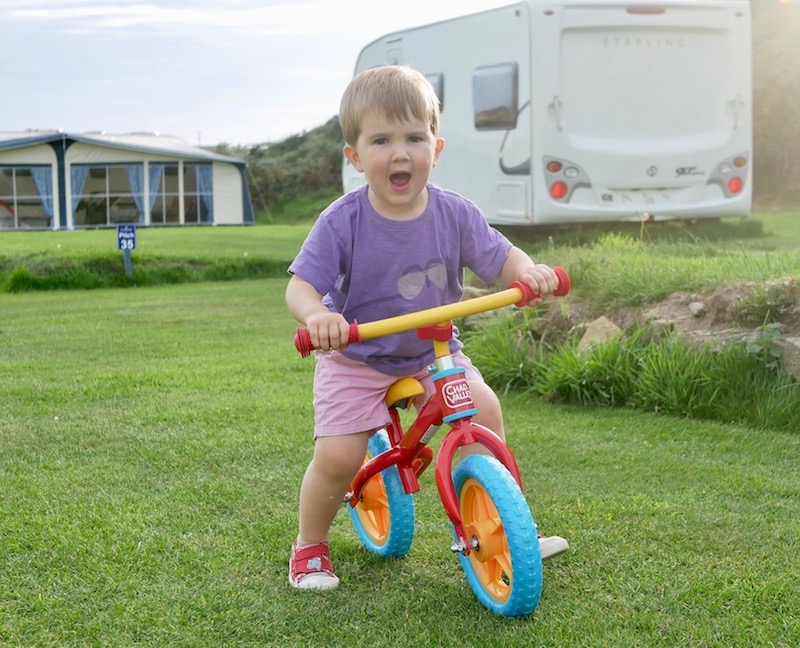 If you read yesterday’s post (above) you’ll know that we’re planning to spend our summer enjoying 4-day weekends as a family. It’s the first step towards breaking this cycle of working more to buy more to work more to buy more. We’ll be spending most weekends camping, caravanning and glamping around Wales. We might even squeeze in some luxe holiday cottages too!

You captured this perfectly. I've been so tempted to buy a camper van and just go where the wind takes me! Alas, I can't right now, but it's definitely something to work toward. I noticed when I was on an archaeological excavation in Turkey for 5 weeks, sleeping in a tent every night, that I was a different person. Or at least, a version of myself I liked more. We had a site party one night (a fairly regular occurrence given that archaeological expeditions are basically grownup summer camp with beer), and I decided to put on makeup. It looked grotesquely out of place (even though I adore it back home), so I happily relegated my makeup bag to the bottom of my bag for the rest of the trip. It was magnificent.

Couldn't have put it better if I tried. Camping is the ultimate holiday, simple, cheap and by its very nature designed to help you spend time with the people you love, do things that cost little and bring you together in an altogether relaxed place. Although, when it pissed down or blew a gale, it did get stressful :-)

When we graduated to a caravan it was brilliant, good times were less dependent on the weather but you do have to be careful because living in a box isn't easy. As you say, you need space - the awning was the best thing we bought because at least it was like having a separate room for me time.

Another thing to watch out for when you have a caravan is it's too easy to slip into old habits. You have more space than a tent so it's tempting to fill it. Before you know it you have a second home with all the crap that goes with it. Secondly, be careful of keeping up with the Jones's. There is always the temptation on campsites, someone will have a cool inflatable awning, space-age caravan mover or portable Agar and you've just gotta have one. Go for a walk instead and remind yourself why your there, to get away from it all.

That said, the best time of our life, best holidays and deffo perfect for the kids to see us in a different mode. Not stressed, not separated by place or time and really helped us to raise grounded kids and be a happy family!!!