I know, I know. This is a little different to the blog posts you normally find on The Travel Hack and I apologise in advance if this is of no interest to you. If menstrual cups and menstruation in general isn’t your thing then please do come back tomorrow when we’ll have another travel related blog waiting for you!

Before I go any further, I was sent the Lily Cup for free but this post is in no way sponsored. As a blogger, I’m lucky enough to be sent a lot of products to test out and I’m under no obligation to feature them on the blog. So why have I chosen to feature the Lily Cup Compact? Because it’s flipping awesome and if I can convince just one of you that you should give it a go then I’ll be a happy blogger! 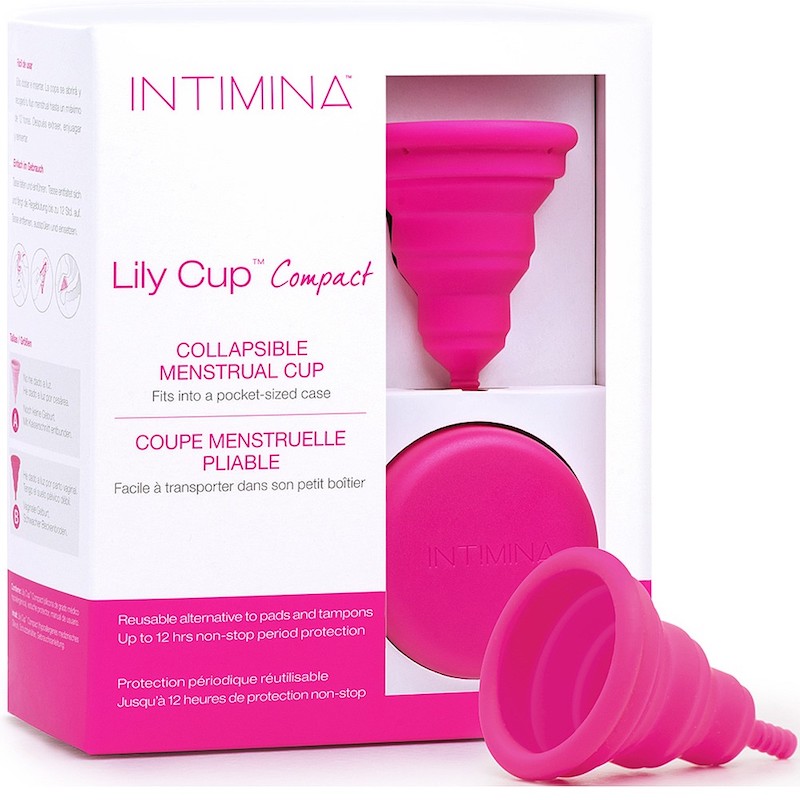 I’ve always hated periods. OK, I’m pretty sure no one exactly loves them! I’ve never had bad periods and never really suffered from PMT or cramps so I have no real reason to hate them other than they’re an inconvenience I could do without.

From the age of 20 to 26 I had the implant so I didn’t have periods at all. The implant gave me spots but I was travelling a lot at the time and I figured that spots were better than periods. Imagine camping next to the River Ganges in India and getting your period or at a full moon party in Thailand. Urgh, no. I then had two babies close together and I breastfed them both (most women don’t have periods when they breastfeed) so I think I had about 6 periods between the age of 20 and 29.

After 9 years I’d forgotten how hideous tampons and sanitary towels are but I’d assumed there was no alternative. And I think that’s the problem. Most of us aren’t aware of the alternatives and all the adverts we see on TV are either for Tampax or Always so it feels like that’s all there is available to us.

I’ve been hearing about menstrual cups more and more recently but, I’ve got to admit, I’d assumed they were for hippies. I didn’t understand them and the only people I saw promoting them were the real eco warrior types. I think it’s great that more and more people are aware of the environment and we’re all doing our best to cut down on plastic waste, but I wouldn’t quite put myself in the eco warrior camp just yet.

But the Lily Cup arrived at my house in a fancy goody bag and I thought I might as well give it a go since it was there.

I watched the YouTube video about how to use it but I was fully prepared for it to be one of those things that takes a long time to get used to. I remember using tampons for the first time as a young teenager and it took me months to get the hang of it!

But I can honestly say there was no ‘getting used to it’ with the Lily Cup.

The first time I used the Lily Cup Compact I had a day of working from home planned. I didn’t want to be going out and about just in case it leaked or was uncomfortable. But it was one of those mornings where I couldn’t get into my work. I’d been sat at my desk for an hour and couldn’t get my head into gear so, without thinking, I gave up on work and went to the gym. It wasn’t until I arrived that I remembered I was wearing the Lily Cup and had a momentary panic, but I figured I was there now so I might as well get on with it.

Of course, everything was fine and I continued to use it without any problems for the next 4 days and my main feeling after this first test period was, ‘I can’t believe I’ve been using those hideous tampons and sanitary towels for so long when this has been available!’

I couldn’t believe how simple it was. And also how comfortable. I wasn’t really even comfortable, I just couldn’t feel it at all. And it’s so convenient too because you don’t need to constantly change it like a tampon.

It’s recommended you empty and rinse the Lily Cup every 12 hours and it’s so comfortable that you really do forget you’ve got your period.

The thought of emptying the Lily Cup seemed a bit gross but it’s honestly not that bad. My initial concern was that after using it you’d need to use a sink to clean it and if you’re in a public toilet without a sink in the cubicle you’d have to go out into the communal area to wash it. But I Googled the Lily Cup FAQs and it does say you’d be fine to occasionally wipe it with tissues, wet wipes or carry a bottle of water in your handbag and give it a rinse over the toilet.

I think I was lucky that I got the hang of it on the first go. I’ve read other reviews and watched YouTube videos where people have said it’s taken them a few attempts to get the hang of it. I didn’t have any leakages and didn’t feel the need to use a pad ‘just in case’.

I think it’s going to be especially great for travelling because you can wear it all day without worrying about finding clean bathrooms or searching for your usual tampon brand in a foreign place. I have the Lily Cup Compact which is even better for travelling because it’s collapsible and folds down into a tiny box which is a similar size to a compact blusher (if you’ve ever had a Mac blusher, it’s the same as that so it’s very discreet). So you don’t need to heft around bulky packs of sanitary towels. I remember meeting a girl in Asia who’d been worried she wouldn’t be able to find her normal brand of sanitary towel so she packed 6 months worth in her backpack! That must have taken up so much space! 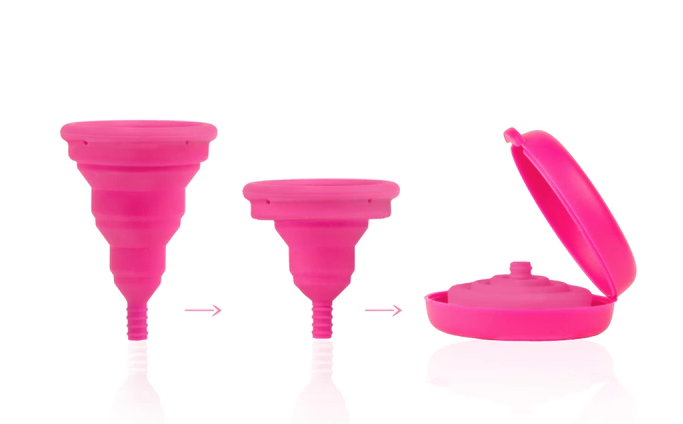 Pros and cons of the Lily Cup Compact

The Lily Cup Compact can last for years so, in the long run, you’ll save money. It currently costs £25 so that’ll be a big saving if it lasts 3-4 years. According to this post on the Huffington Post the average woman spends £13 a month on pads, liners and tampons. That seems like a lot to me but whatever you spend, you’ll save in the long run.

Like I said above, I found it to be so comfortable I couldn’t even feel it. Much better than pads or tampons!

I think I was lucky to get the hang of it so quickly but I didn’t have a single leak.

Can be used for up to 12 hours

Much more convenient than tampons which should be changed every 4 hours.

It’s tiny and discreet and will take up less space in your luggage when travelling.

It lasts for years

So even if you’re going backpacking for a few years, you don’t need to worry about being anything new.

You’re also helping the environment with less waste than you’d have with tampons and pads.

When I’m out in public, I like not having to sneak into the toilets with my bag or slip a tampon into my pocket before I go in. Because I’m usually with my kids, my handbag doubles up as my baby bag and it looks a bit weird hefting a big baby bag into the loos with me!

I’d be 100% comfortable wearing it while in a bikini

Now this is a biggest biggy and probably the biggest advocation of the Lily Cup – I’d be more than happy to wear this while wearing a bikini on the beach. I’d be much more comfortable using this than tampons. See, I told you it was good!

For some people it takes some getting used to

It’s a bit uncomfortable to remove it

It can be messy

I’m not going to lie, removing it can be messier than removing a tampon. You quickly get used to it but I would recommend carry wet wipes to clean your hands when you’re in public toilets.

As you can see, I’m a big fan of the Lily Cup. There are three different types of Lily Cup available depending on your needs and your body. Take a look at the Lily Cup site for more information about them and to find the best one for you. They are also available to buy on Amazon for £25.

[…] Learn extra of this fearless traveler’s product review on her blog! […]

[…] Read more of this fearless traveler’s product review on her blog! […]