I’m doing something a little different today. I’m taking part in Podmas! The only problem is that I’m so late to the party it’s actually over and I’m not doing it right at all…

You may have heard me mention Lucy Lucraft’s podcast, What She Said, here before. It’s a podcast about women who have established creative careers online and Lucy interviews an inspiring person each week. It was the first podcast I ever listened to and I love it so much I even ended up sponsoring it for season 3 with The Blogger Course. What She Said is so inspiring and it really is the highlight of my Monday when I listen to the latest episode while walking my dog. (If you want to listen to it, just search ‘What She Said Podcast’ wherever you listen to podcasts)

Every year Lucy does something called Podmas in December. That’s Christmas and a podcast together. See what she did there! Podmas is a short version of a podcast focusing on something personal, so it’s a bit different to Lucy’s usual podcast topics. She records 12 mini episodes and they give a glimpse into her life away from the podcast and they’re super interesting and I love hearing more about Lucy’s life!

I was a bit late to the game listening to Podmas this year and Lucy had almost finished her 12 episodes by the time I finally binge-listened to them all.

This year, Lucy encouraged all of her listeners to take part in Podmas and offered 12 prompts to start a discussion around a particular topic.

I know I’m ridiculously late to the party but I’ve decided to join in with Podmas, but writing my responses rather than speaking them. I’m not very good at speaking. I stumble over my words and it’s usually 10 minutes later I think of something awesome I could have said but I’ve missed the boat. I like writing and I like words but, most importantly, I like being able to edit my words!

So here I go with Podmas day 1: The best piece of advice I’ve been given 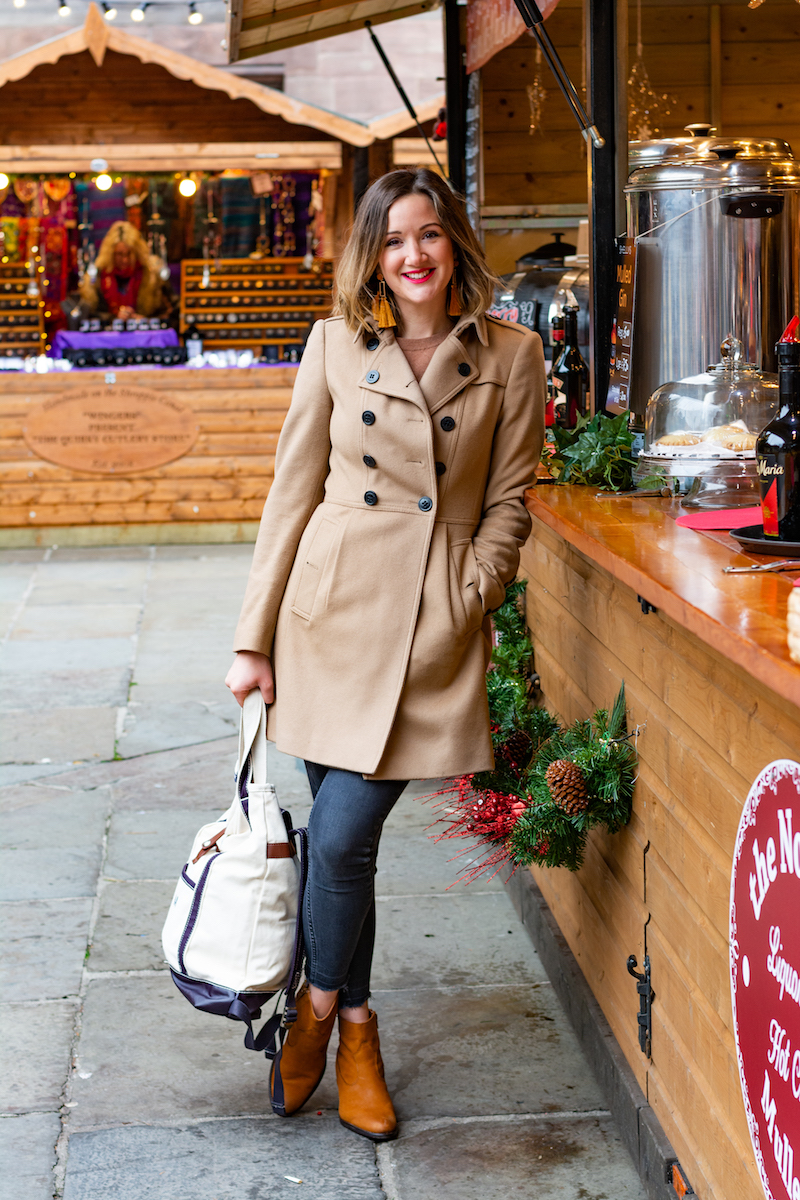 The best piece of advice I’ve ever been given was during the first conference I went to. I was about 23 and I remember sitting in a large, darkened auditorium and the stage was illuminated by purple lights. I was a bit nervous and felt very alone because I didn’t know anyone in there but there was something comforting about sitting in the dark and listening to someone speak about something really inspiring. I was balancing a blue notepad on my thigh but I was so mesmerised by the person on stage I didn’t write down a single word.

I don’t remember who the person was. I don’t even remember if it was a man or a woman, but I remember almost every word they said.

The main point they made and their gem of advice was to own your mistakes and hold your hands up and admit when you’ve done something wrong.

It’s so scary to admit you’ve done something wrong but once you’ve admitted it, it isn’t a big deal anymore. But if you keep it inside, it eats you up or escalates and becomes an even bigger mess.

As soon as you tell someone, you can get help to fix it and learn from that mistake and move on.

But if you don’t tell anyone, you could spend the rest of your life trying to dig yourself out of a hole that just gets deeper and deeper.

This conference was very business-y and the speaker used lots of examples of how people had messed up at work and tried to hide their fuck up until it became such a catastrophic mess that there was no turning back.

This is an extreme example here but it happens in movies all the time and every time I see it I think about that conference. You know the movies where our main character accidentally murders someone then they try and hide the body and their lives spiral out of control as they hide from the police and an inevitable life of imprisonment? Yea, those movies. They should really just own that mistake! When I’m sat at home watching the film from the comfort of my own sofa, it seems so simple to shout at the TV, ‘What are you doing you idiot? Just call the police and explain what happened. It was an accident. You’ll get manslaughter and do your time but now you’re running and you’ve fucked everything up you eejit!’

OK, back to a real life example.

During the talk I remembered a time when I was a kid and I broke my dad’s favourite fountain pen. This was back in the 90’s when people actually wrote stuff with a pen and having a nice fountain pen was a big deal. This pen was beautiful, seriously, it was the dog’s bollocks when it comes to pens. I used to sit at my dad’s desk in his office at home and I’d be writing down any words that came into my head, simply so I could feel the ink glide across the paper and admire how neat my writing looking with this lovely pen. I couldn’t wait to be a grownup and have a pen like that of my own. I bet my dad found pages and pages of nonsense written on his best printer paper and scattered across his desk when he came to sit down and work each evening.

Then something awful happened. I broke the pen. I was fiddling with the lid and it just broke in my clumsy little hand. Without a sealed lid the pen would dry up and it was never quite the same again.

I felt terrible and I didn’t dare tell anyone.

Every few weeks I’d sneak into my dad’s office and check how the pen was doing but, much to my dismay, it didn’t ever heal itself.

I still feel bad about that now.

A few years later, the pen came up in conversation and my heart plummeted through my insides like a boulder.

‘That pen broke a while ago,’ my dad said while glancing in my direction. ‘I’m not sure what happened to it….’

That was my chance, that was my in, my time to finally admit what happened and I didn’t take it.

It was almost like having a devil and an angel on my shoulders with one screaming, ‘Tell him now, tell him, it’ll feel so good to finally admit it!’ While the other one was quietly muttering, ‘No, no, no, don’t tell him, then he’ll know! He’ll know you broke it. He might be mad. Or, worse still, he might be really disappointed.’

And every child knows the horror of a parent saying, ‘I’m not mad, I’m just really disappointed.’ Oh god, even now I know there’s nothing worse.

And I didn’t tell him. I still haven’t told him. And there’s still a part of me that feels really bad.

If I’d have just owned that mistake 25 years ago it would have all been forgotten. I probably wouldn’t even remember breaking the pen. My dad wouldn’t even care! My dad is the most laidback person in the world, he wouldn’t have even been mad at the time.

Since listening to that talk during a conference I don’t even remember, I’ve got pretty good at owning my mistakes, particularly in work.

I don’t know about you but that feeling when you’ve done something wrong at work is awful. That moment when you realise you’ve just deleted a whole folder full of photos and you’ll never get them back, or the second you realised you’ve sent an email to wrong client and you’ve got yourself into a whole heap of trouble, or the time you told a little white lie because you missed a deadline and then you forgot about the lie and you’ve basically just thrown yourself into a massive hole with an enormous spade and you just need to start digging…

The panic starts in your chest as your heartbeat quickens and your palms get sweaty. You neck prickles and suddenly it’s very, very hot. Your cheeks are flushed and your eyes are darting all over the place while a quiet, ‘Oh fuuuuuuck’, slowly slips out of your pursed lips. You long to go back in time, just 10 seconds back and everything would be OK. Why isn’t that possible? Why isn’t that a thing!?

A colleague looks over with a quizzical look.

Now’s your chance. Take it. Tell them. Tell them everything and it’ll all be OK.

Or hide it and you’re in this alone.

One of the best things about owning your mistakes is the fact that no one can talk shit about you.

There’s nothing worse than someone saying something bad behind your back! OK, maybe there’s one thing that is worse, it’s sitting at home on your own and wondering if someone is saying bad things about you behind your back. You start imagining what they might be saying and you somehow make it much worse than anyone would actually say in real life. That is the worst!

But if you’ve already held your hands up and said, ‘Yes, I messed up there. I did something wrong, I took on a project I wasn’t ready for and I failed. I failed because I’m not quite experienced enough and I’m sorry. I’m sorry I messed up and I’m sorry if I made your job harder. But I’m going to learn from this mistake and I sure as hell won’t let it happen again.’

So there you go, that is the best piece of advice I’ve ever been given.

Own your mistakes, apologise for them and learn from them.

Come back tomorrow when I’ll be talking about the prompt for day 2 about what it means to me to be vulnerable online.

Blog
Finally, after the longest January of all, it’s February! I feel like there’s been a collective boost in morale today as we’ve said goodbye...

Blog
Did you see my post about my 12 monthly challenges? I’m not doing traditional New Year’s resolutions this year, I’m choosing 12 mini challenges...