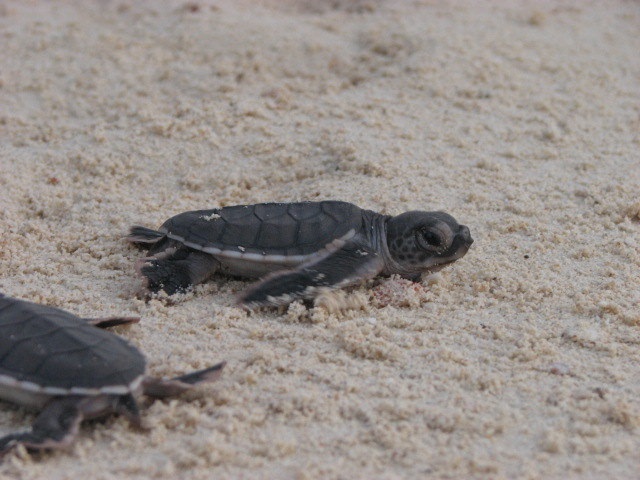 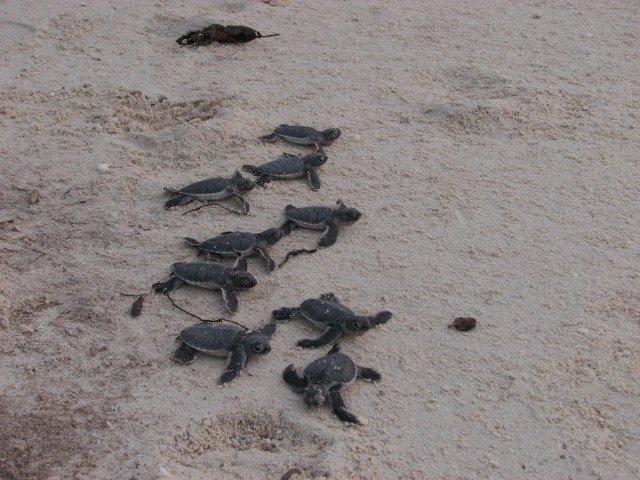 Whilst in Borneo, we spent a night on Seligan Island, the largest of three islands which make up The Turtle Islands which are on the border between Borneo and the Philippines. 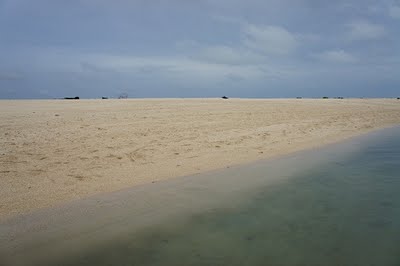 Seligan Island is absolutely beautiful, a perfect island paradise with white sand, clear sea, bright flowers and palm trees. Unfortunately it rained from pretty much the second we arrived to the second we left. I was a bit disappointed but we weren’t there for the snorkelling and sunbathing, we were there for the turtles! 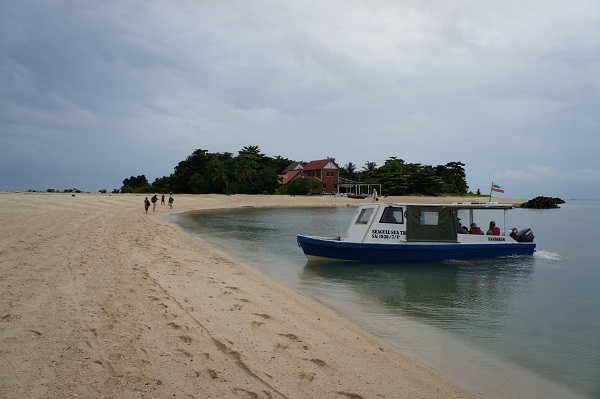 The turtles come to the islands all year round to lay their eggs. The conservation teams earn their money through inquisitive tourists who are eager to see the laying, hatching and release of turtles.

We were told that the first turtle usually comes to shore to lay her eggs at around 11pm, so we were fully prepared for a long wait after our dinner. I’d just set down my knife and fork at around 7.30pm when a call came that set the whole room into a flustered panic, ‘Turtles laying! Turtles laying!’ someone was calling.
We jumped up from our seats as though someone had screamed there was a fire and we all scurried out of the door and onto the dark, dizzily beach. We followed a keeper down to the shore where the first turtle of the night had just finished the painstakingly slow process of digging her hole so she could beginning to lay her eggs. 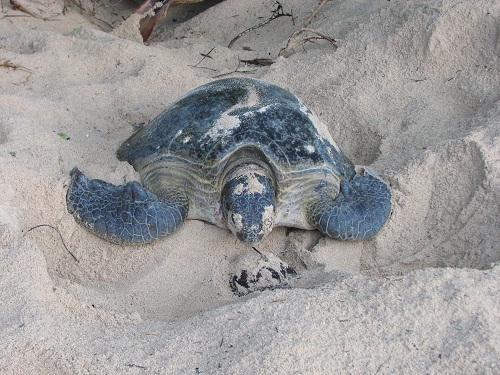 We were told that when the turtle first starts laying, she goes into an almost trance like state and barely notices any of the people around her. They have terrible hearing so can’t hear all the people and due to the dark they can’t see us. This was slightly reassuring but it still felt a bit wrong. About 15 people gathered around a hole at the rear of the turtle where a torch was shining on her as she basically gave birth. 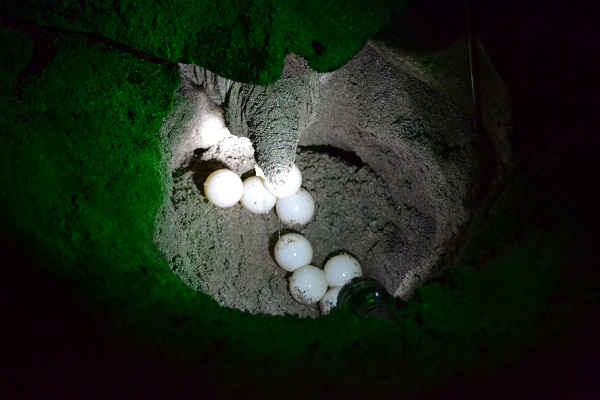 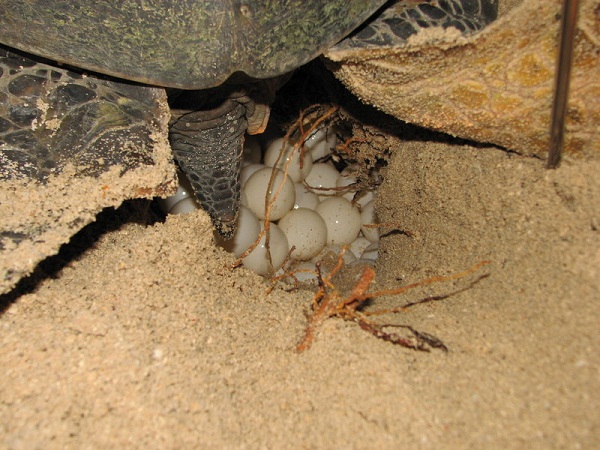 A keeper sat next to the hole and scooped up her eggs as they plopped into the nest. He put them in a bucket, ready to be buried in the hatchery later. The eggs looked exactly like hard boiled chicken eggs and popped out quickly, one after another while dripping with a clear slime.

This particular turtle was a Green Turtle and laid 78 eggs within about 10-15 minutes. When she was finished, she filled in the nest with sand, completely oblivious to the sad fact that her nest was now empty. The keeper then measured her, 102cm long, cleaned her shell of any barnacles and checked the tag on her right fin that indicated she had laid eggs on the island before.
We were then quickly ushered out of the way before she began her journey back into the sea and we headed to the turtle hatchery to watch the new eggs being buried in a new and safer nest. 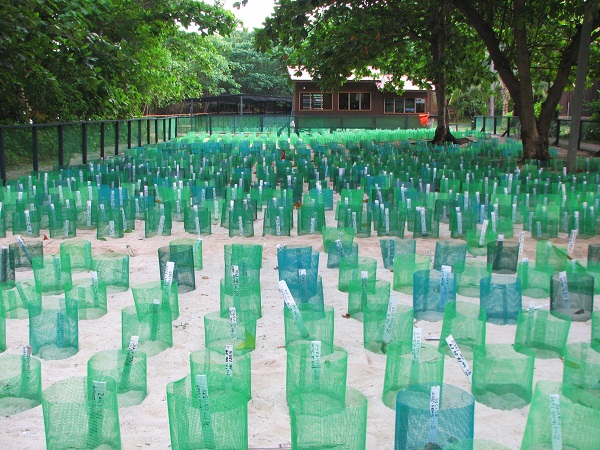 They dug a small, deep hole in a protected area alongside dozens of other holes in long straight lines. They had protective mesh around them to ensure predators couldn’t get in and so the turtles can’t stray too far when they hatch and climb to the surface. Once they are buried, a small stick is placed in the ground with details such as the date and how many eggs are buried in the nest. This looks strangely like a mini grave stone making the whole area look like a weird turtle egg grave yard, particularly when the keeper filled in the nest with sand and muttered the words, ‘Hatch in peace’.
Some of the nests are placed in the shade to ensure they are cooler. This is because heat affects the sex of the turtle. The hotter eggs develop into females and the ones below 25C develop into males. I thought it was funny that even female turtles like to be warmer than the men.
Once the turtle eggs were safely buried in a new nest, we took a basket of newly hatched turtles down to the shore to release them in the moonlight. 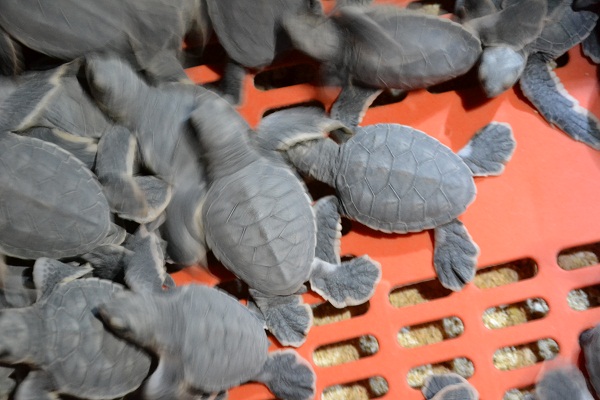 They are all released together as it gives a few of them a small chance of survival. Only 1 in every 1000 will grow to be adults and if they are released in a large group, some of them will be attacked by predators while the others can make it to safety. That truly is ‘taking one for the team’.
We only released 22 and it was sad to think that it was unlikely any of these cute little babies would survive.
While we were on the Gili Islands there was a turtle hatchery where the turtles were kept in tanks. The keepers there claimed that they were released when they were big enough to survive, but we were told on Turtle Island that if they were not released immediately they would lose all their natural instincts and can’t survive in the wild.
I don’t know which is true but Turtle Island seemed to be very good and the guides and keepers were very knowledgeable and it was a great experience seeing them protected and released.
Click here to cancel reply.

>Baby turtles are the cutest thing when they make their way to the ocean! It's sad that so many die trying to get there, but I guess this is LIFE!

>So many beautiful pictures. Turtles are my favorite animal so I know I definitely would of enjoyed myself.

>They are absolutely gorgeous! I love turtles, I have two at home, they are adorable, they ignore me a little but they are sweet nevertheless :P I would go crazy in this island!