Have you ever driven into a village where more than 50 people chase your car along the dusky track while singing and chanting, ‘welcome, welcome, welcome’? Where the women were dancing with more energy than an aerobics instructor while banging drums and buckets to give rhythm and noise to the chant. They slapped the car as we crawled through the crowd, careful not to knock any of the children over, as they peered through the windows with smiling faces. I think it’s fair to say that it was one of the best welcomes I’ve ever had. 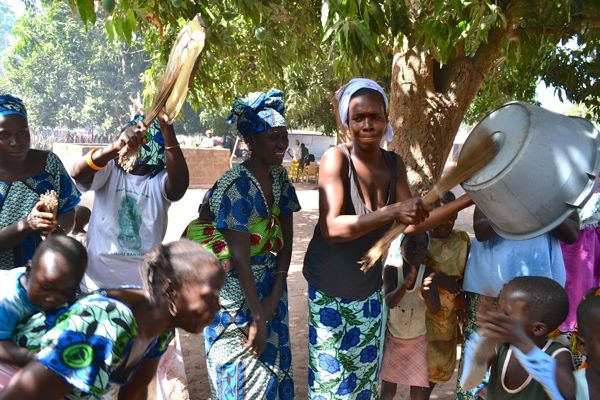 Getting out the car was an awkward struggle as I squeezed out without bashing anyone with the door and a million and one hands were shaking mine. “Hello, welcome, what is your name?” echoed among the crowd and everyone pushed forward for their turn at shaking hands. I tried to return the question and desperately pleaded with my brain to remember all the names that were shouted in my direction. Within seconds the rowdy crowd had noticed by camera hanging by my side and posed as if on queue like a bunch of super models at a shoot.

The kids gathered into small groups before I’d ever asked if I could take a photo and gave their best pose as they stared at the camera. I couldn’t help but laugh as this was a travel blogger’s dream come true; people that actually want to be photographed! I always hate that awkward moment when you ask a local person if you can take their picture and they either shoot you down with a stern ‘no’ or they pose awkwardly and ask for some money. But this wasn’t like this as about 20 kids surrounded me, all desperate to be the next to have their photo taken. 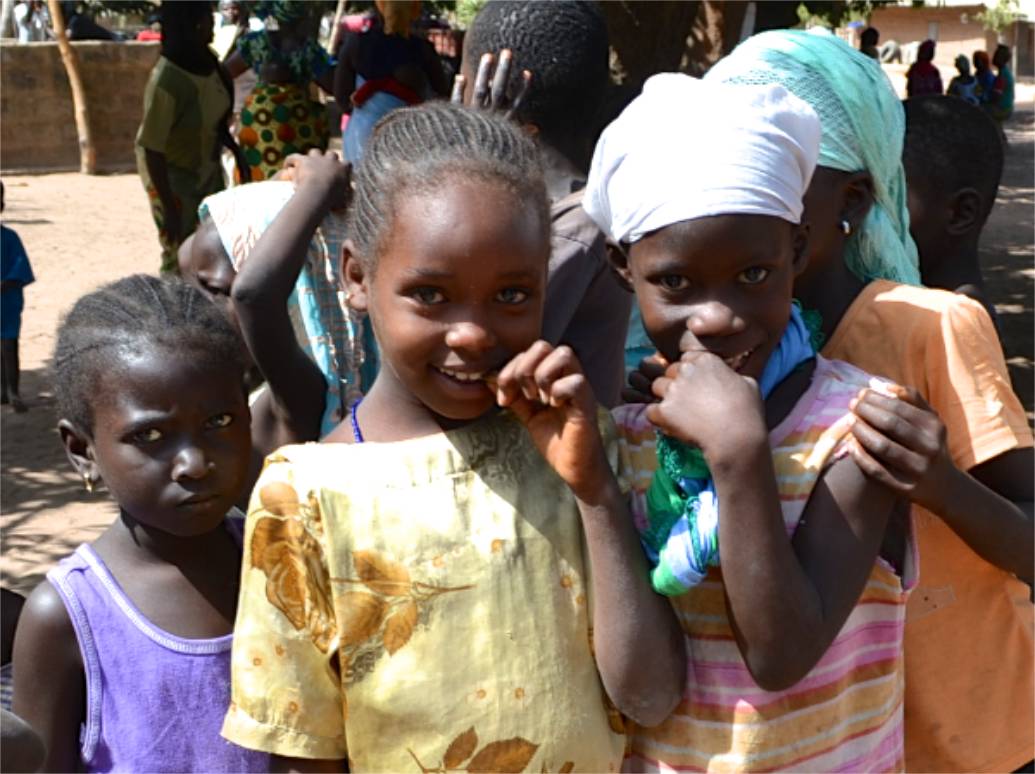 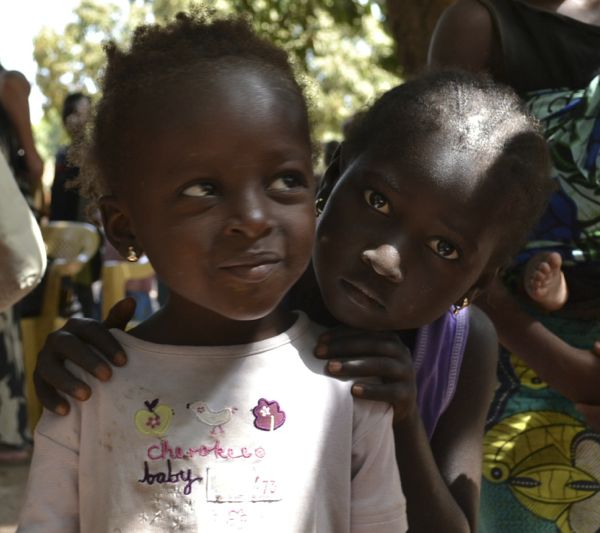 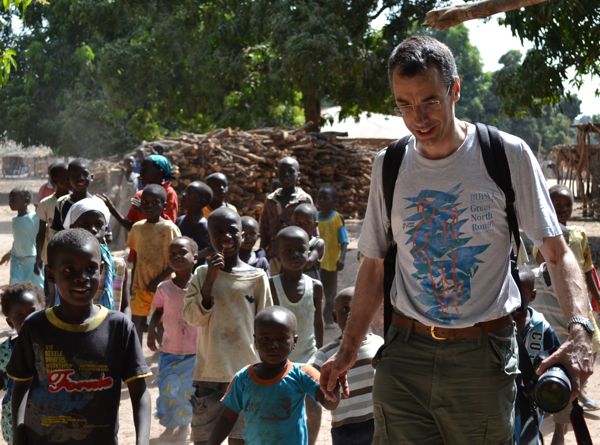 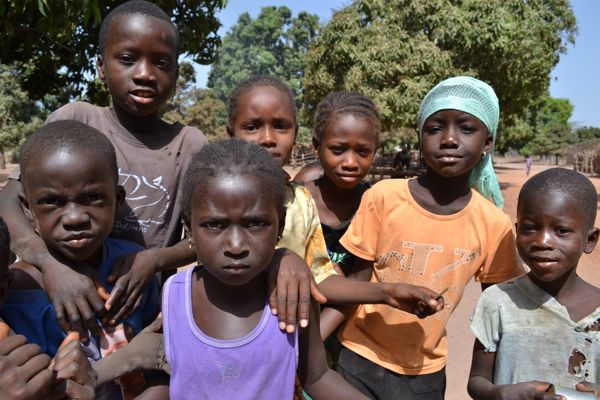 Some would stare moodily into the camera lens like a movie star while others would wrap their arms around each other and beam into the camera with those huge smiles that Gambian people are so well known for. The older kids and the young women were much more coy and would lead against each other in mock relaxation but ready for the camera should it turn in their direction. They’d then rush forward to see their image on the camera screen and shriek with laughter at seeing themselves. It was like a massive game that I think we could have played all day. I made a video at one point and as I crouched down to show the kids I became surrounded in a mob. From the outside of the circle you couldn’t even see me, I was buried under a sea of laughing heads as they all struggled to see the screen. It was honestly the most fun I’d had in ages. 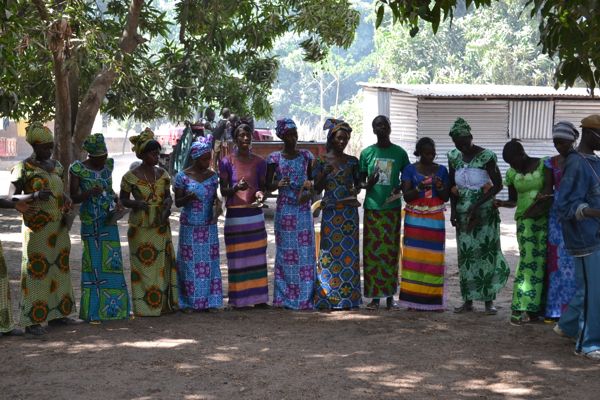 After hundreds of photos were taken we noticed a group of ladies congregated in a circle as they played iron bells and some men played the drums. The dancing started slowly, exactly like it does in a nightclub anywhere in the world.

First you get the ladies gently swaying their hips, followed by a few of the braver women having a little shimmy in the middle of the dance floor. Before you know it, all the men are watching which gives the women more confidence. As the music builds, more women join in and they take it in turns to dance in the middle and strut their stuff. Then a beautiful woman arrives who was fashionably late and, with all eyes on her, she cranks the dancing up a few notches with her sexy moves. 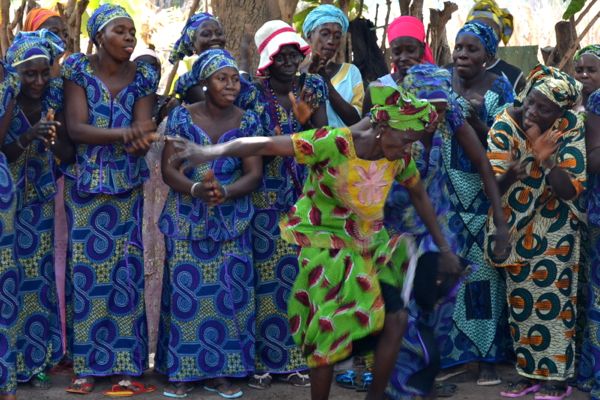 The music gets louder and faster and a few of the braver guys get involved, but they dance together, afraid to be alone with the pack of women. It’s not long before men are on one side and women on the other in a dramatic dance-off with everyone shouting, clapping, cheering and whooping to the music. It’s just your average night in Oceana really. And then the Kumpo arrives and everyone goes mental. OK, maybe that doesn’t happen in Oceana…. 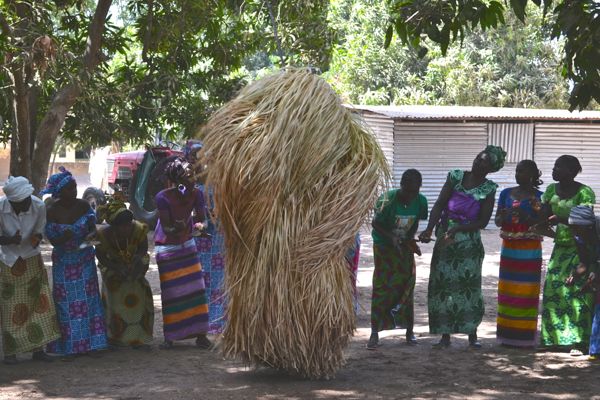 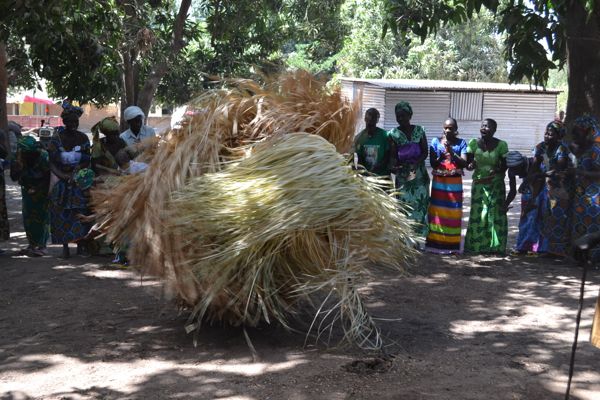 Watch this video if you’re wondering what a Kumpo is:

I was pretty shocked when the shrieking and screaming started to escalate and out of nowhere a walking haystack with a spike on his head appeared and started shaking his thang. He then started spinning on his spike and wafting his arms around to make the kids scream and run away. This is seriously the kind of thing that kid’s nightmares are made from.

Joking aside, the Kumpo traditionally has a very important part to play in celebrations. The Kumpo is a masquerade found among the Jola, an ethnic group found in The Gambia and Southern Senegal. The crazy costume actually isn’t a haystack and is made from the rhun palm and is meant to represent a broomstick. The Kumpo protects the village from evil spirits and ensures that communal work takes places. 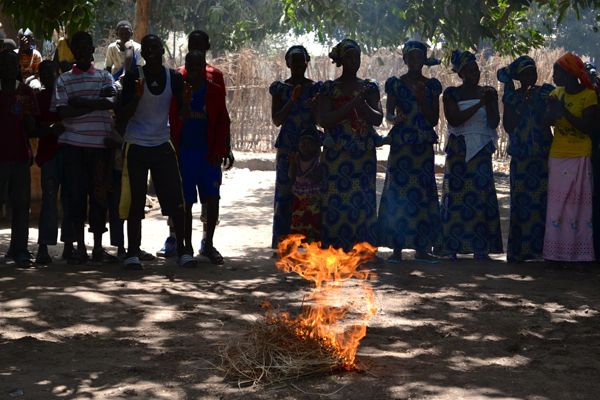 After at least 30 minutes of energetic dancing in the midday sun, the Kumpo reached his epic finale. A small fire was lit in the middle of the dance floor and the brave Kumpo pranced over to it and used his giant costume to extinguish the fire. The dance ended in a cloud of smoke and a deafening roar from the highly impressed crowds. Little kids cowered from behind their parent’s legs while the bigger and braver ones joined in with the final dance.

By the end I felt exhausted, purely from all the energy and excitement that had gone into the dance. I’d done nothing more than watch from the side lines feeling slightly embarrassed by my lack of coordination and wishing I could dance like the other women. I had no right to be tired but so much had gone into the dance. It was more like a high energy, interpretive show with special effects and a live band. And the best thing was that everyone was loving it. They weren’t just there to put on a show for the tourists, they were there to have fun and you couldn’t help but get swept up in the passion for it.

But, believe it or not, we weren’t here just to take pictures and watch the dancing, we were here for a much more important reason. We were here to see the results of a project called ‘Light up a Village’ where rural villages are given lights. It was a great project so I’ll be talking about it more next week.

So, for now, it’s goodbye from The Gambia, the friendliest place I’ve ever been.

Thanks Monica. The Kumpo is indeed an enthralling masquerade dance. The excitement that the Kumpo brings reflects the excitement that our Light up a Village Initiative brings. Dear John Initiatives like ours and visits from tourists changes lives of villagers from the ground up. The negativity spread by articles of human rights abuse will not help improve lives of those who suffer from it. Engagement helps. Thanks Monica for making the effort and the visit. Ram

Hello Monica, I write to draw your attention to the deplorable human rights situation in The Gambia its not all rosy in Gambia often this country is portrait as a holiday destination,please see the links below. http://www.amnesty.org/en/region/gambia

It looks really amazing. I'd like to go in that place one day :)

I love the kumpo! I've never heard of that before. Your experience (minus the kumpo) reminds me a lot of my time with a maasai tribe in Tanzania. I ended up handing my camera over and letting them take their own photos. It could have gone on all day!

That sounds like so much fun. Did they take many good pictures with your camera?