Say ‘community project’ or ‘charity project’ to anyone in the Western world and they’re instantly weary. It’s sad but true that Charity projects are viewed with suspicion and everyone has begun to question how much good they’re really doing.

I visited a project in India that was aiming to provide work for women but while I was there 70% of the workers were men.

“So…errr….where are all the women?” I asked during our tour.

“We have to employ men to do the jobs that women aren’t qualified to do. The women aren’t educated to do these jobs,” my guide replied.

“So surely it would be better to invest money in educating women?”

“Yes but they can’t afford to not work and may not find a job afterwards anyway.”

It was a long and frustrating conversation and I realized it would take a hell of a lot more than just a few people donating a hundred quid to make any difference to the lives of the people in this village.  It left me feeling deflated and very suspicious of charity projects. But I’m happy to say that the projects I visited in The Gambia were clearly doing some fantastic work and the results were immediately evident.

“Light is a primary necessity for development” 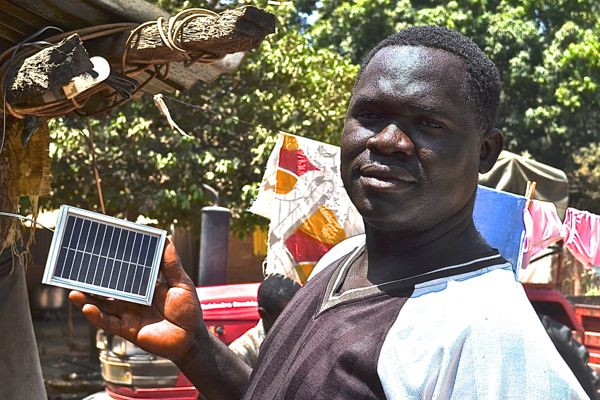 The solar panels used to charge the lights 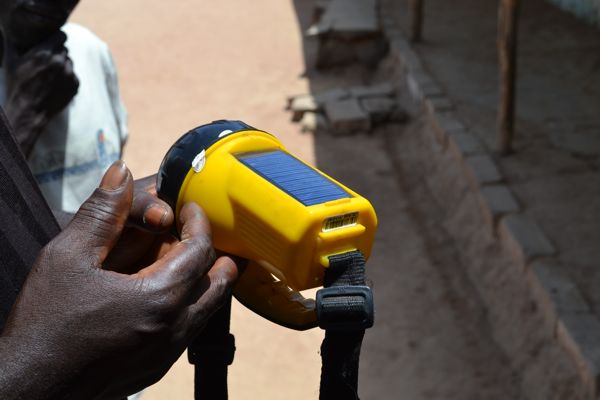 The torches given to the families 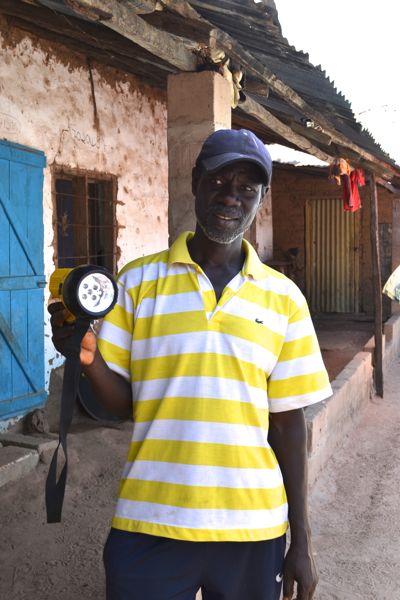 The first project I visited is called Comafrique-Intelizon Initiative otherwise known as Light Up a Village which aims to provide solar powered torches for small villages. It may not seem like a lot but, usually, the best plans are the simplest. I went to Kanuma Village but the project has helped many villages all over The Gambian. This was also where I saw the incredible Kumpo dance!

The average family without electricity in The Gambia pays $0.20 for candles a day. These candles give off very little light so strain their eyes, they can be a fire hazard and they’re unhealthy to breathe in. A torch however, costs $0.04 a day, is eco friendly, provides enough light for the family to cook their evening meal and also for the children to study in the evening. It also doubles up as a generator and can be used to charge mobile phones meaning the family can communicate and it can be easier to find work. There isn’t a fire risk or health problems and it helps the children get a better education because they can read in the evening.

Each family who owns a torch pays their $0.04 into a community fund which is then spent however the community sees fit so it also builds community spirit (not that they were ever lacking this in The Gambia) and helps the village develop. The money saved is also put toward buying new torches when they need replacing in two years time. The torches are initially donated by an NGO, corporations, the government or individuals. 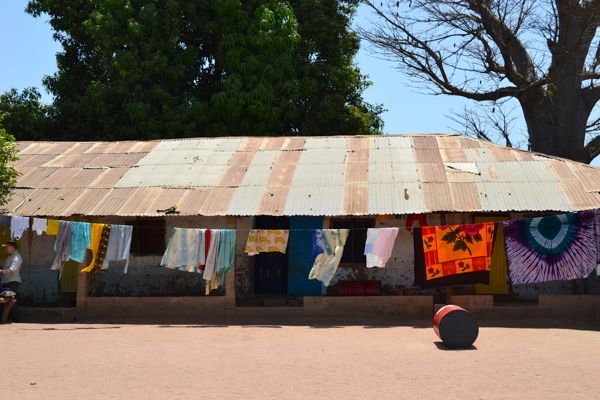 Kunuma Village. You can see three separate homes in this picture where a husband, a wife and their children will live together in one house. 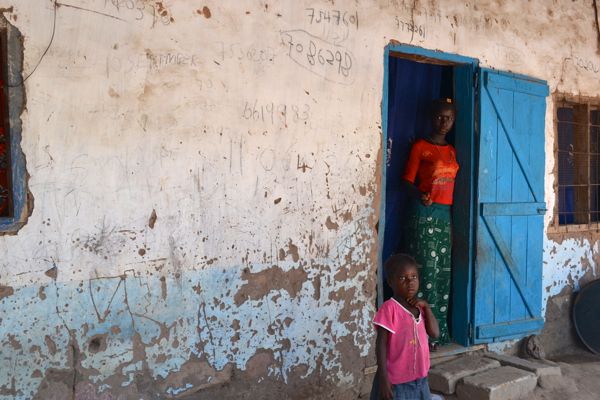 A typical home in Kunuma Village

The thing I like best about this project is that the family are immediately seeing the benefits and saving money.  Yes, it’s brilliant to give people things that will benefit them in years to come but what about right now? What about the families that can’t afford to eat. Who cares about long-term projects when you can’t afford to feed your children?

The second project I visited was The Stove Initiative and it’s another very simple idea. At the moment, most Gambian families cook on old stoves set in stone that can’t be moved. The stoves are outside so when it rains they simply can’t cook, and I’ve been told that during ‘the green season’ it rains a hell of a lot. These stoves also cost a lot to fuel with either charcoal or wood and the forests are getting smaller as people hack the trees down. 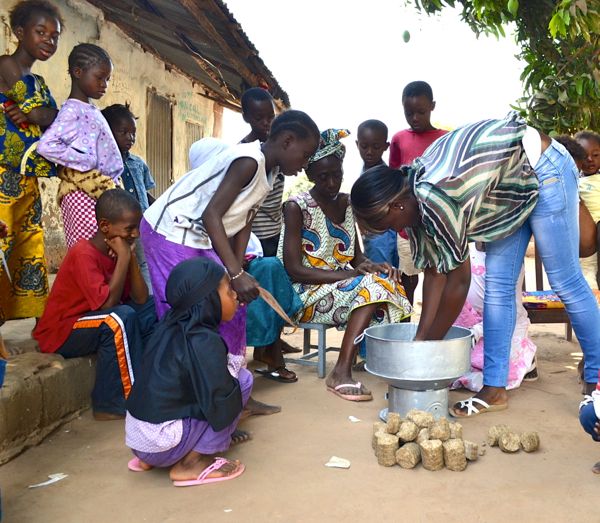 Learning how to light the stoves

The Stove Initiative gives stoves to the poorest of families and they run on briquettes made from peanut shells. The peanut shells usually go to waste so it’s a really environmentally friendly option. The briquettes are also half the price of charcoal so, once again, the family are instantly saving money. Win, win. 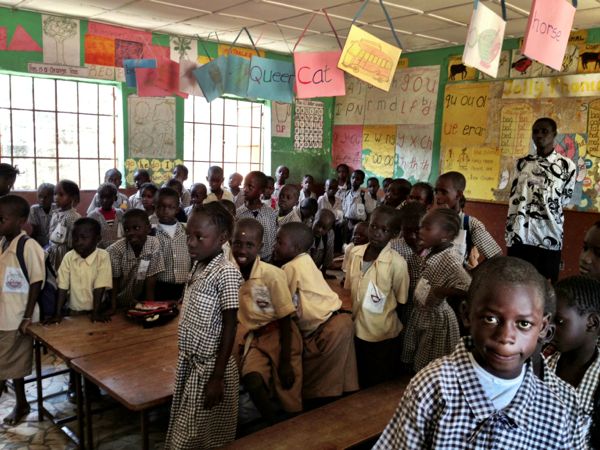 On my final day in The Gambia I visited a local school. It was incredibly basic but was doing a great job. There can be up to 50 children in each class but we were told they simply can’t turn the children away. Children do have to pay to go to the school but some children have been sponsored which costs £17.50 a month. This amount covers their costs and also helps pay the teachers and goes towards maintenance costs. Some families can’t afford to send their children to school so the teachers were desperate for more sponsorship. 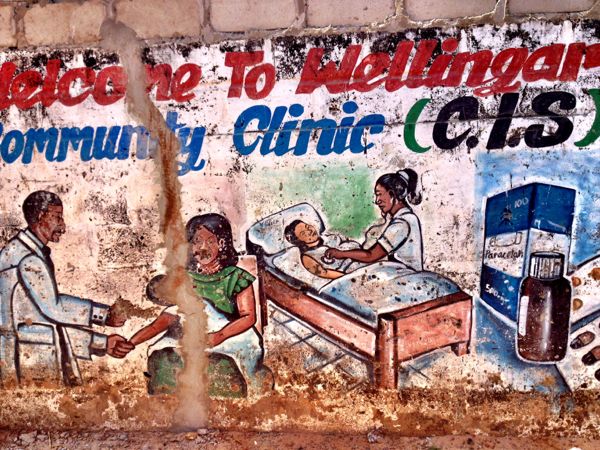 A painting on the wall outside Wellingara Clinic

The final project I visited was a maternity clinic which absolutely broke my heart. Every other Thursday they open their gates to women for pre and post-natal care. We were told that they had seen nearly 900 women between 9am-1pm on the previous Thursday. They don’t open for check-ups on other days because they can’t afford to pay the staff. Women can’t deliver their babies at the clinic because they have no facilities in case of an emergency so they have to travel 4km to another clinic. It might not sound far, but if there is an emergency, they have no way of getting there. They don’t have the money to pay a taxi and no one would allow a woman in labour into the back of their car. The clinic are desperate for an ambulance which would allow them to deliver babies there and have an emergency transport to the larger clinic in case something went wrong.

When visiting a developing country like The Gambia it would be easy to stay in a 5* resort and ignore the fact that there is poverty all around you but if you open your eyes it’s there. There are really simple ways to help and offer support with things that mean so little to us but can change a person’s life.

I find it really difficult when I’m travelling to developing countries. I can’t help but feel guilty for having so much but also feel incredibly relieved to be born in the UK, which in turn makes me feel even guiltier. There have been times when I’ve gone on a shopping spree and blown enough money to send a Gambian child to school for an entire year. How is that even fair? I’ve never really thought about how lucky I am to have electricity, running water, an education and a safe and secure home.

My visit to The Gambia has given me a lot to think about. As always, travel brings surprises and can make you reassess your values and think about what’s really important.

I was a guest of The Gambia Experience who have supported these projects as part of their 25 year anniversary celebration. If you would like any more information about these projects, please don’t hesitate to contact me via email [email protected] or on Twitter @TheTravelHack.

[…] from thetravelhack.com visited some of the successful Gambian community projects while she was there. From the torch project where families are given torches to use at night that […]

[...] village by Monica, The Travel Hack from her post on community projects in The [...]