Berlin is known as a cool, gritty city. It’s vibrant and cutting edge and filled with creative people who drive the city forward.

But did you know that Berlin is an environmentally friendly city too?

By 2020 Berlin aims to be the greenest city in the world. That’s an ambitious goal, especially when they have some tough competition from the likes of Vancouver, who is also doing pretty well at the green game.

In these situations everyone is a winner because each city pushes the other to be greener and more environmentally friendly.

Berlin’s greenness goes beyond the obvious things like over 2,500 parks and green spaces, the popularity of cycling over driving, the encouragement to recycle (you get €0.25 for every plastic bottle you recycle!) and an impressive public transport system. It’s something in the attitude of the residents and some ingenious eco-projects that use the green space they have effectively.

Btw – I haven’t mentioned green hotels because more often than not they’re not green at all. I don’t think a hotel should be allowed to call itself a ‘green hotel’ just because it doesn’t change the sheets everyday and recycles the glass bottles. That’s not green, that’s just common sense.

Last week I took a ‘Green Tour’ in Berlin to some of the cities most exciting green spaces.

This is a little different to most of my posts but the interest has also stemmed from my boyfriend and I buying a house. I won’t go into too much detail because we’re still in the early stages but we’re looking at a complete wreck of a house next to a river. It’s a blank canvas (i.e. we’re going to have to gut the entire thing and start from scratch) so I was on the hunt for ideas we could apply to our house and make in an eco-friendly home.

The tour was interesting and we went to some cool places but, in all honesty, it was lacking any real information. Virtually everything in this post comes from my own research and chatting to people outside of the tour. 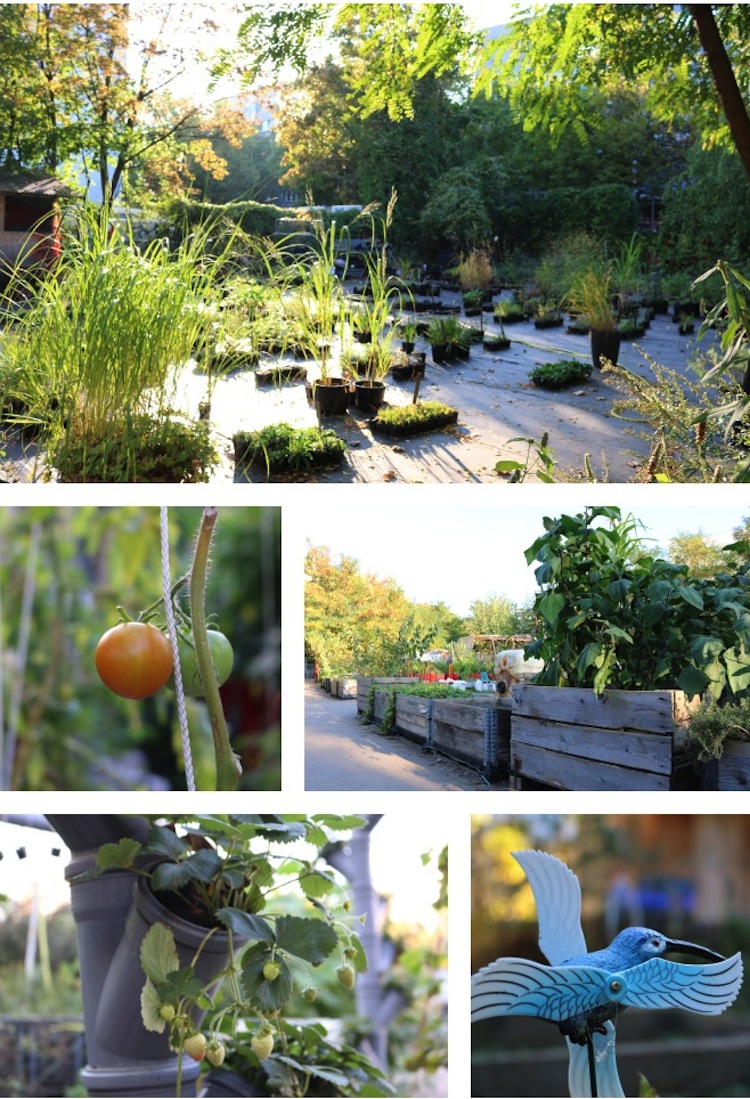 Why is Berlin environmentally friendly?

First of all I wanted to look at why Berlin is so eco-friendly and, like everything in Berlin, it stems from its turbulent history.

Berlin was a closed city for such a long time after WWII so the locals had to become self-sufficient. It meant making the most of the green spaces available and these areas became valued and protected by residents.

Many people were also very poor after the war so a natural and unspoken policy of reusing and recycling and making your own was necessary. This was a time when allotments weren’t a luxury or a space for elderly people to relax, they were an absolute necessity to grow food in order to keep people alive.

After the war there were also a lot of unused spaces and wastelands, which were taken over by locals and used as urban gardens. The city was bankrupt so people were allowed to take over these spaces because the government had no money to do anything else with them.

There may not be as many of these spaces left today but this environmentally friendly attitude is now ingrained in many people.

Side note: Isn’t it strange how things that are ‘cool’ these days were once a necessity because people couldn’t afford an alternative. Things like knitting, making your own clothes, cycling, vintage shopping, urban gardens, cooking from scratch and upcycling are all ‘fashionable’.

Berlin is a city of huge contrasts. You find rich and poor people living side by side. Beautiful historical buildings standing next to some of the ugliest concrete blocks you can imagine. It’s multicultural and diverse. And somehow, against all the odds, Berlin has become one of the coolest cities in the world.

Of course, a cool city attracts cool people and Berlin has attracted artists and forward thinkers from all over the world.

You’ll find so many creative and entrepreneurial people in Berlin, many of whom are interested in socially responsible and environmentally sustainable projects.

There are so many projects in Berlin to help these creative people start sustainable businesses.

Not the catchiest name for a non-German speaker. This is a park in Schöneberg that has naturally evolved from an old railway hub built in the 1890s – it’s very similar to the High Line in New York!

It was once a concrete jungle but was abandoned 50 years ago and nature was left to take over.

This was my favourite stop on the tour because I thought it was incredible to see how nature can eventually take back what humans have destroyed. It reminded me of one of those sci-fi films where all humans have died and you see how the world evolves back to forests and jungles.

The park is now a mixture of industrial ruins and natural beauty. Artists have created scultpures from the remains of the railway tracks. Nothing has been changed except for a footpath through the park that is raised in some areas to allow wildlife to live beneath it.

This is still Berlin so, of course, street artists wanted to put their mark on the park. They’ve been allowed one tunnel in the park provided they don’t use any other spaces. While we were there we saw some kind of organised street-art where lots of young artists were practicing their skills. It was so strange to go from the tranquillity of the park to an organised group spray-painting the walls. It reminds you that you are in an urban area.

ufaFabrik, Centre for Culture and Ecology

This was a former film studio and local residents teamed together to stop it being demolished. At first it was used as a circus training school and eventually evolved into a living and working eco-community.

The centre has been used to develop and implement sustainable ecology projects. Thirty people live here permanently and many volunteers help keep it running. There’s a solar panel system providing enough electricity for the whole centre, there are veggie gardens, mature green roofs and a massive rainwater collecting system.

There are also loads of cool things going on like live performances in the outdoor spaces, an organic baker and Café Ole. There are workshops, a kid’s circus school and a centre for social, health and family matters.

The thing I really like about ufaFabrik is their learning philosophy. They aren’t afraid to take risks and try something new and they act according to the local community’s needs. They’re open about sharing what they’ve learned and they’re a great example of effective urban development.

Local councils could learn a lot about urban planning from these guys! 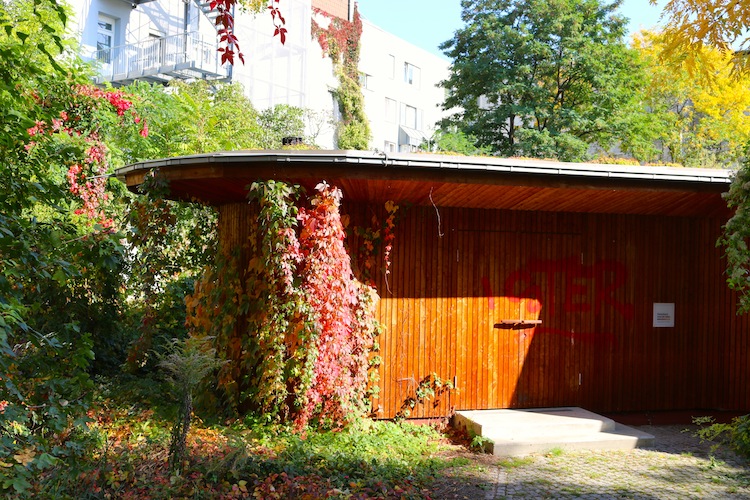 We also visited a roof-water farm. It actually just looks like a regular block of flats so isn’t really worth visiting but it’s interesting to hear what they’re up to.

All of the grey water that comes from the flats (water from baths, dishwashers, washing machines and rain water) goes into a irrigating system. It’s filtered and then goes towards feeding the rooftop gardens. Eventually they want to have a fish farm on the roofs of the buildings.

An urban fish farm will eliminate all the environmental issues surrounding transportation of food. I don’t know too much about this but our guide told us that fish farms in rivers can have a negative impact on the river because if any fish escape they quickly destroy the area because they’ve been raised to eat so much. I don’t like the idea of fish farms but I guess when you have so many people to feed they’re a necessity.

We also visited an urban market and urban gardens during the tour. I’d definitely recommend checking out the farmer’s markets in Berlin because they’re huge and the food is so good!

I was visiting Berlin with Citadines during the Citadines Moments 30 competition. I stayed at Citadines Kurfürstendamm Berlin, a really cool apart’hotel perfectly located in the city centre with great transport links to the rest of the city.

This is surely interesting and I’d love to see if Berlin will be up to the task in 2020. We are in Berlin right now and I have to admit that it seems already a green city to me, now having said that, there is always room for improvement and development. We shall see ?

"That’s not green, that’s just common sense." Agree!! Plus it's better for them economically to not wash the sheets every day, so I often assume saying they're doing it for the environment is just a cover up for their real goal, which is to save money. On another note, I love Berlin! I'm happy to hear it's such a green city. That's awesome.

This is surely interesting and I'd love to see if Berlin will be up to the task in 2020. We are in Berlin right now and I have to admit that it seems already a green city to me, now having said that, there is always room for improvement and development. We shall see ;)

Helping the Earth is so important and hopefully more cities will start adopting these approaches. Love the idea of a roof-water farm!

Whoa, the roof-water farm sounds really cool! I spent a year in Germany in high school and already then it seemed sooo green to American me. And that was nearly ten years ago (10 years?!) so I can't imagine how much the eco efforts have progressed.