Berlin has become the unofficial street art capital of the world and you can find street art on every corner of the city. In fact, it isn’t just on the corners, it’s everywhere. Every blank wall has become a giant canvas for whichever artist is brave enough and talented enough to spray, paint, stick or stencil their message to it.

While I was in Berlin I decided to take a street art tour to find out more about the huge variety of art around Berlin.

You could walk around for days admiring the street art in Berlin but unless you have someone who really knows their stuff it can be hard to understand a lot of it.

At first I was just seeing pretty pictures and bright colours but it was obvious that there were hidden message behind each piece of art.  During the tour I learnt more about the history and culture of Berlin through the art but also about pop culture, rivalry between artists and the huge impact street art can have. 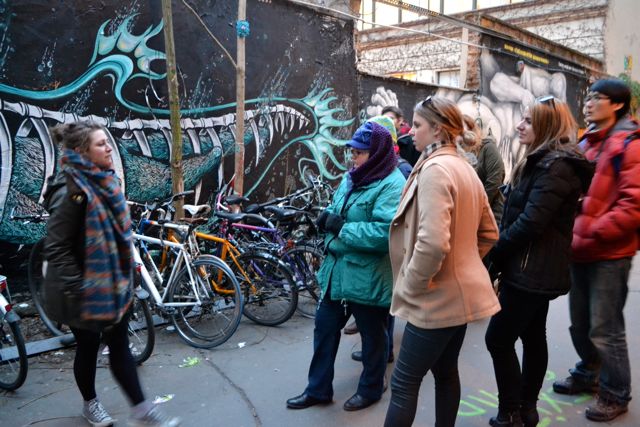 Mitte is the central part of Berlin and has become known for all the famous street art in the area. Mitte is the ‘cool’ part of Berlin. This is where all the artists and hipsters hang out and you’ll find lots of cool bars and cafes. It’s becoming a popular place for tourists so I’d recommend visiting Mitte quickly because it isn’t cool once us tourists know about it.

One of the reasons there is so much art in Mitte is thanks to the artists squats, and the biggest and most famous squat is Tacheles. Tacheles was not only a home and studio for artists but also contained workshops, a nightclub and a cinema.

Tacheles has recently been closed down, much to the disappointment of virtually everyone in the area. It may look like your average abandoned building from the outside but we were told that it’s filled with colourful murals and sculptures with a huge sculpture garden in the back.

The building was originally a huge department store in the Jewish quarter of Berlin but this obviously closed down during the war. It served as a Nazi prison for a while and demolition began just before the Berlin Wall came down. Once the wall came down, demolition was abandoned and the building was taken over by artists. The name Tacheles can be translated to ‘straight talking’ in Yiddish and it quickly became the place to be in Berlin. 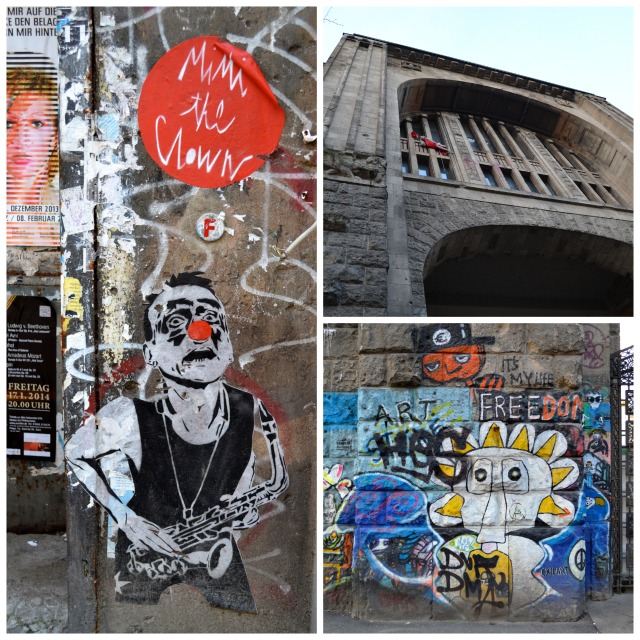 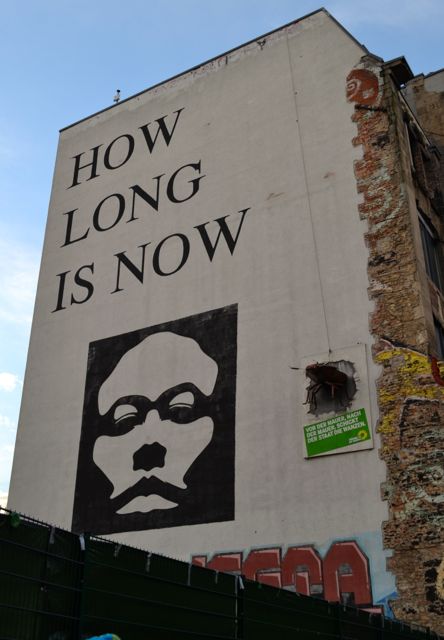 This piece of art on the side of Tacheles with the words ‘How long is now’ highlights the frustration that nothing has been done with the building since it was closed down. It asks the question ‘How long will it take for something to be done with this building?’ but there isn’t a question mark suggesting that we all know the answer and that’s ‘no time soon’. The building has been taken over by HSH Nordbank but it now sits as an empty shell and a reminder of what it once was. Locals argue that if nothing is being done with the building, why not allow artists to use it? 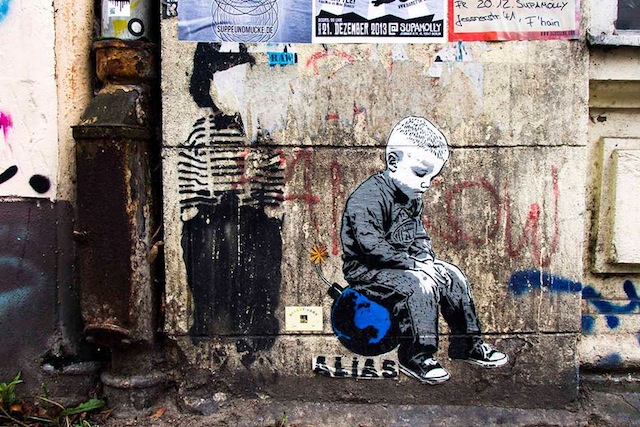 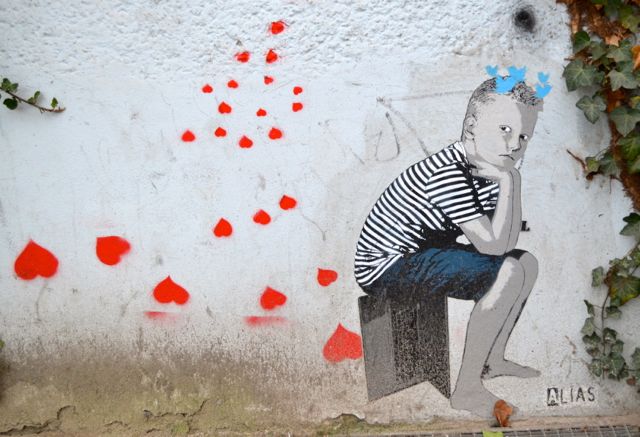 Alias is a German street artist based in Berlin and most of his work depicts children and teenagers in dangerous situations. Their faces look soft and angelic but there is always something dangerous going on in the background. This piece above highlights the dangers of social media for children. 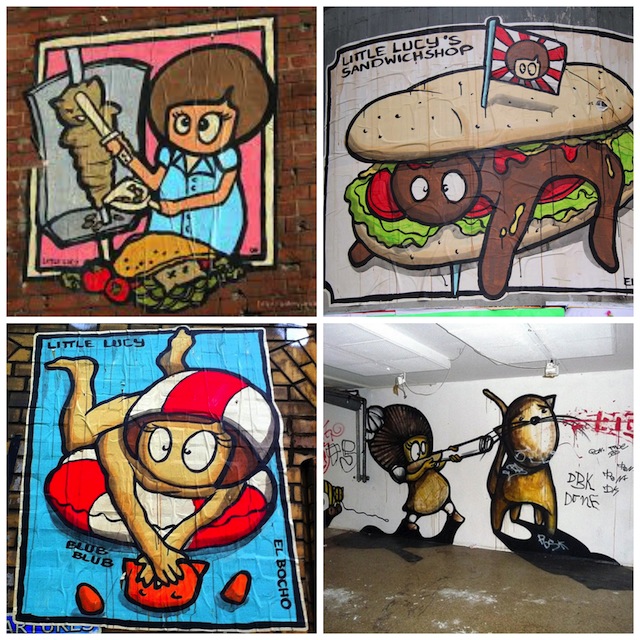 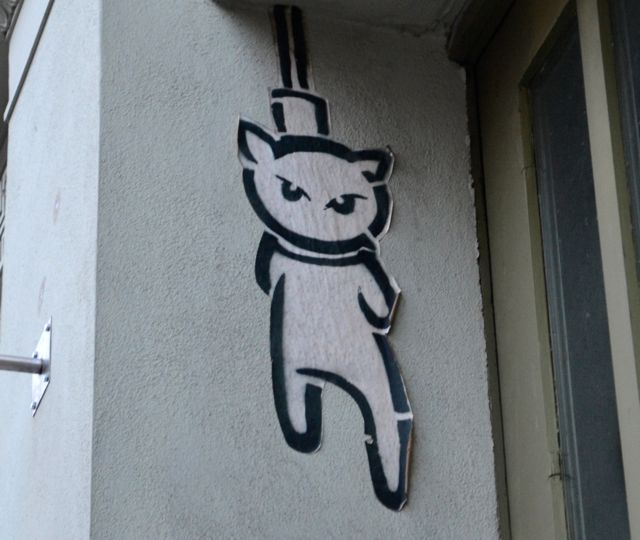 El Bocho’s Little Lucy street art both hilarious and disturbing. The story behind this art began when El Bocho was watching a cartoon called Little Lucy which sounds very similar to something like Dora the Explorer. Little Lucy has an adventure every day with her cat, there is a moral to the story and they ‘all live happily ever after’.

El Bocho didn’t like these perfect endings and decided to start creating street art where Little Lucy isn’t such a sweet little kid and actually kills her cat. Lucy kills the cat in many gruesome and inventive ways. In the pictures above you can see that she has attached him to a kebab stick and starts to slice him like doner meat. She also cooks him in a sandwich, drowns him, blows his brains out and hangs him but you can find many more cat murders around the city if you know what you’re looking for! 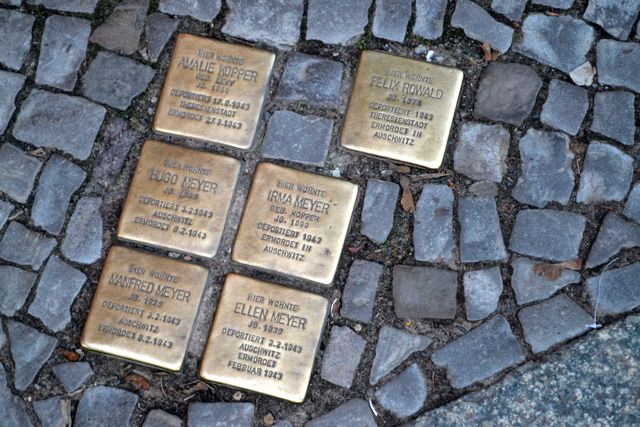 These Stumbling Blocks are somewhere between street art and a memorial to all the people who were killed during the war. If you pay attention, you’ll see them all over the city. The blocks are slightly raised and they get their name because you literally stumble over them as you’re walking.

Each block is a memorial and is placed somewhere in Berlin where a victim of the war would have walked every day. It may be outside their house, on their street or outside their place of work. The idea is that we shouldn’t forget these people. The war shouldn’t smack you in the face every time you walk down the street but it shouldn’t be forgotten. 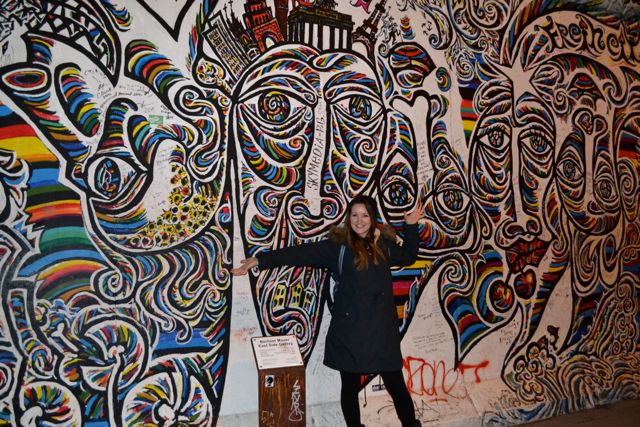 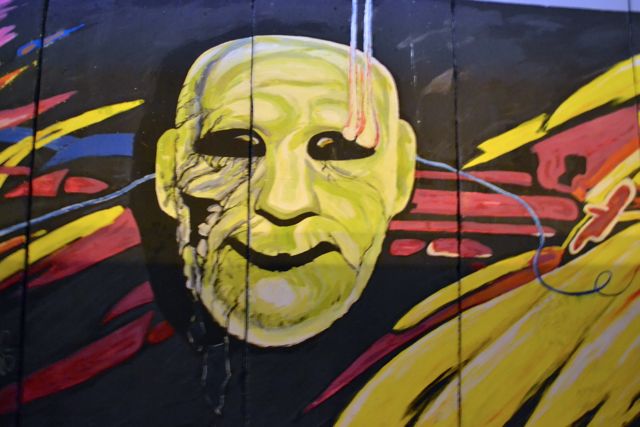 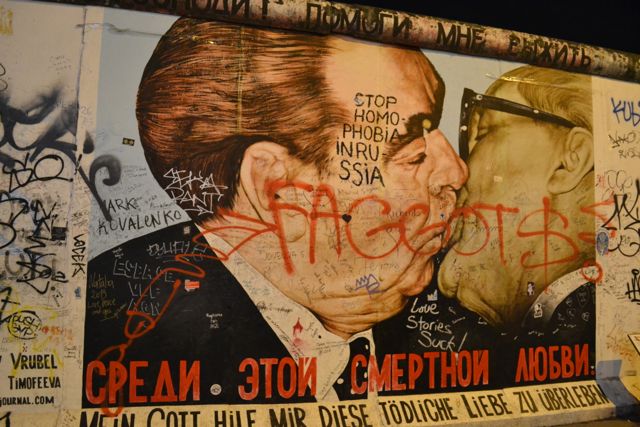 Selected artists were invited to create a piece of art on a section that remains of the Berlin Wall. The wall runs for a few hundred meters and the wall is sections off into five meter canvases for artists to create whatever they desire. It’s amazing to see the variation of art as you walk along the wall but a shame that it’s mostly been graffitied with stupid tags and, in this case, homophobic slang. 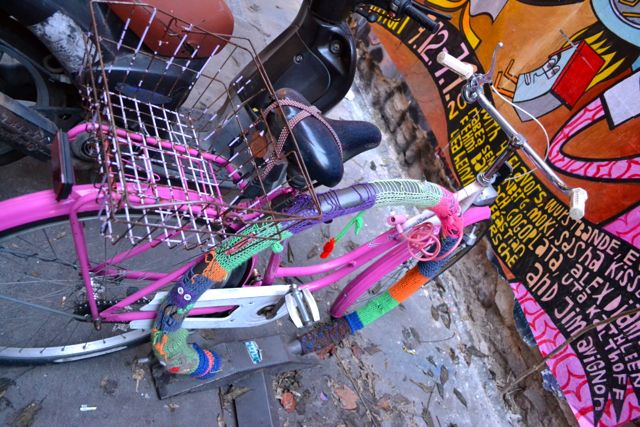 And finally; The least offensive, most time consuming, completely pointless street art of all – guerrilla knitting. Guerrilla knitting is where avid knitters will appear in the night and cover anything from a lamp post to a bike stand to a phone box to a fence with their knitting. It might be pointless but I absolutely love it.

This tour was with Sandeman’s New Berlin Tours and was the Alternative City Tour. At just 12 euro for adults and 10 for students I thought it was an absolute bargain and our guide was brilliant. It lasts for 3 hours and it’s a great way to meet new people too. I also took the free walking tour with Sandeman’s and that was brilliant.

Where do you think is the best place in the world for street art?

I want to visit Berlin and I'm feeling really excited about this place. Your pictures truly amazing, anyway i liked it) I'll going to try free city tour, but didn't hear about company which you recommended, are you enjoyed your tour? I know about big companies which providing free city tour like Sandemans and Generation tours but i'm always open to new opportunities)))

I thin the art tour was a Sandermans tour!

Cool article. Since your visit there have been quite a few developments in the Berlin Street Art Scene. Namely: New street art projects around lake Tegel; Urban Spree and Urban Nation (my favorite...they even have an amazing indoor space for Urban Art with most influencial street artists currently. If you come back to town, get in touch. I am a street art fan. Cheers!

Solo Travel Tips: 8 of the hardest things about solo travel

[…] tours and if you click with someone you could travel with them for the rest of your trip. I did a street art tour in Berlin and met a group of girls who I spent the next 3 days with and we’re all still friends […]

I SOOOO love Berlin! Thank you for the nice post! Check also some of my favorite places here: http://bit.ly/MidoriAllBerlin