Just before Christmas I visited Saudi Arabia, a country I didn’t ever expect to visit! Since returning, the main thing I’m being asked is, ‘What’s it really like?’ I’ve said over on Instagram that I had a surprisingly nice time and I still think a lot of people are unsure if I’m stretching the truth or not here.

Do you know what? I had a really nice time. I didn’t expect to have a nice time. I fully expected it to be an awkward and uncomfortable experience and to come home and say, ‘Yes, everything we see in the media is correct, never go there.’ 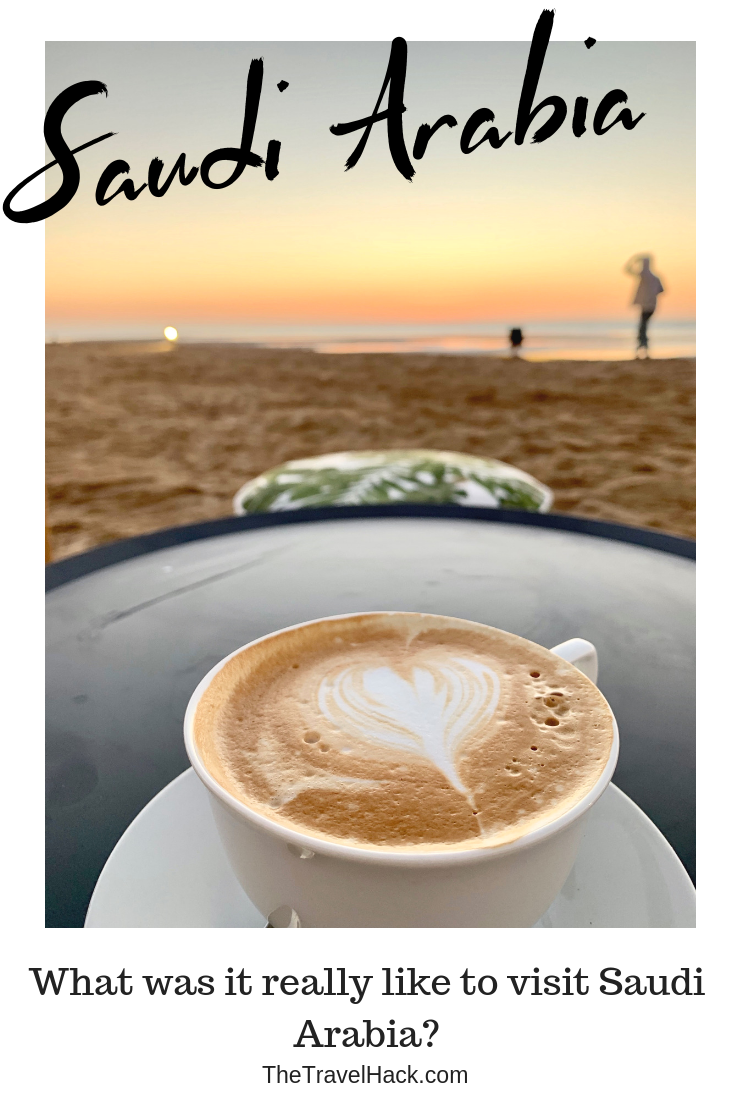 It was actually really nice. Really surprising and unexpected and beautiful. It’s definitely not without its faults but this is my account of my time in Saudi Arabia.

I landed in Saudi Arabia after a 6 hour flight from London and upon landing I was quickly whisked away to a VIP lounge in the airport. I’m not going to lie, I was nervous.

There had been just two women in my section of the plane (I was flying business so there were only about 15 people in total) and I felt reassured when we boarded to see them in Western clothing. They looked glamorous but wore jeans and shirts and chatted with everyone around us and didn’t seem any different to me. Phew, that was a relief. Until we landed in Saudi Arabia and I saw them unfold abayas from their designer suitcases and delicately wrap scarves around their freshly made-up faces. I suddenly felt like my oversized cardigan wasn’t enough and that was the first moment in my life where I really wished I had a man stood by my side.

‘I’ve landed safely. Wish you were here’, I quickly text to Sam, and I meant it. I really, really meant it.

Everything I’d read in the media. Every person I’d spoken to. Every tweet I’d seen. Everything had suggested this trip wouldn’t be easy. But I took the trip anyway, mostly due to intrigue to see what Saudi Arabia is really like for myself.

It also wanted to visit Saudi Arabia due to optimism. I’m an annoyingly optimistic person and I like to think there are good people everywhere in the world and there’s beauty in every country and I wanted to visit Saudi Arabia to prove that I’m right and the media doesn’t always portray what a country is really like. Yes, they report about politics but we don’t see any normal, everyday life in the media.

Thankfully, I was right.

After leaving the plane, myself and about 15 other people who had been invited to Saudi Arabia for the Formula-e racing waited in a sumptuous lounge where we were offered every type of food and drink imaginable while we waited for our luggage to be collected. This is how I imagine Beyonce travels and I liked it.

A private driver arrived to collect me and I was whisked away to my hotel, Hyatt Regency Riyadh Olaya. I was quickly checked in and my first reaction was that it didn’t feel like anywhere else in the world. My tension quickly eased while chatting to the guy on reception and it eased even more as the bellboy brought my bags up. And then even more when I realised I’d forgotten by phone charger so I had to leave my phone on charge behind reception. They guy behind the desk saw my screensaver, which is a picture of my kids, and we had a chat about them and family life and how much energy little boys have.

This all just felt very normal and it was one of many times during my trip that I was reminded that people all over the world are essentially the same. It doesn’t matter about governments or politics or religions. You can go anywhere in the world, pull out your phone and show a stranger some photos of your kids or your cat and you can be pretty sure they’ll pull out their phone and show you their kids and cats and you’ll smile and laugh together and share a connection.

I’d had four hours sleep at this point so I wasn’t entirely sure what was going on so I just followed the guy who seemed to be in charge. I was with a couple of other influencers and their photographer and videographer, some Swedish racing drivers and a few other people of different nationalities who rather mysteriously didn’t give much away and said they were ‘just invited’ to come to the Formula e race, so came.

When we arrived at the airport we could see a little plane waiting for us. It was a little 16 seater and we all assumed we’d be boarding it. To the right there was an enormous plane that looked like a standard plane you’d share with hundreds of other people. I could not believe it when we were ushered towards this plane and boarded into a living area I could quite happily move into. There was a bedroom with a king sized bed, a living room, a huge living and dining area, an area with plush leather seats and proper bathrooms. 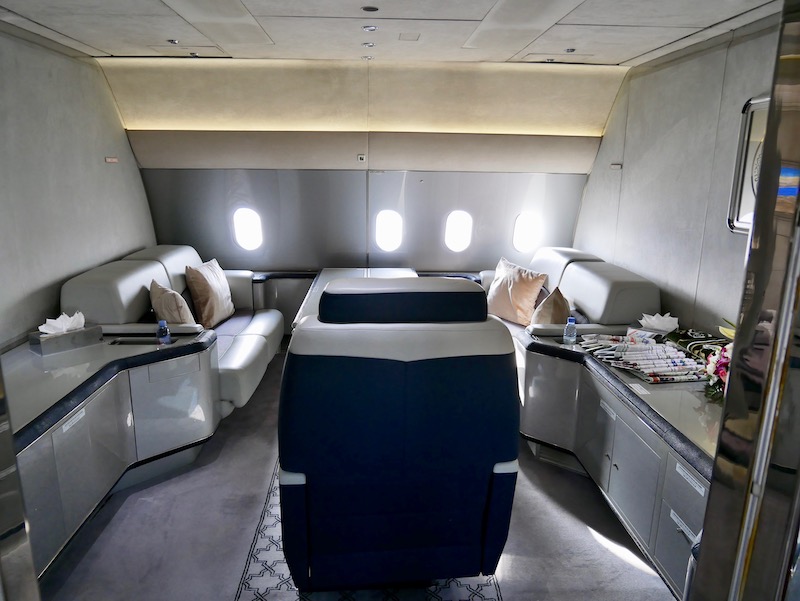 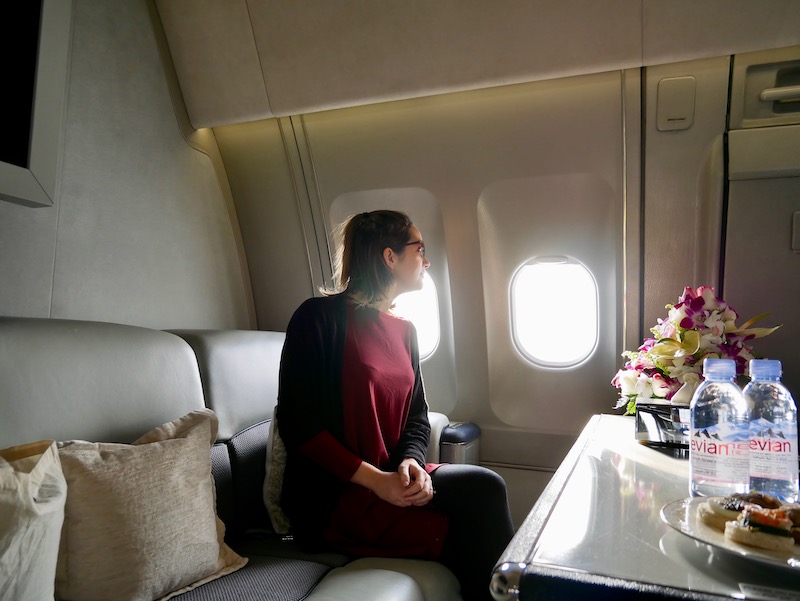 I’m absolutely devastated I was so tired at this point because I barely took any photos and I didn’t fully appreciate how incredible this was!

We flew over the desert for an hour and a half and were then collected by a long line of fancy 4x4s that drove us through the sandy landscape. After miles of nothingness we arrived at a large marquee (a bit like a very posh wedding marquee) where we were served Arabian coffee, an impressively grand buffet and had our first sighting of Saudi Arabia’s Red Sea and the stunning blue waters and golden sand.

We were told all about The Red Sea Project, an enormous and ambitious project to turn this area into an ultra-luxury holiday destination for the uber rich. Looking around and you can’t blame them for wanting to use this incredibly beautiful area for tourism. If it were anywhere else in the world, it would have been developed years ago. 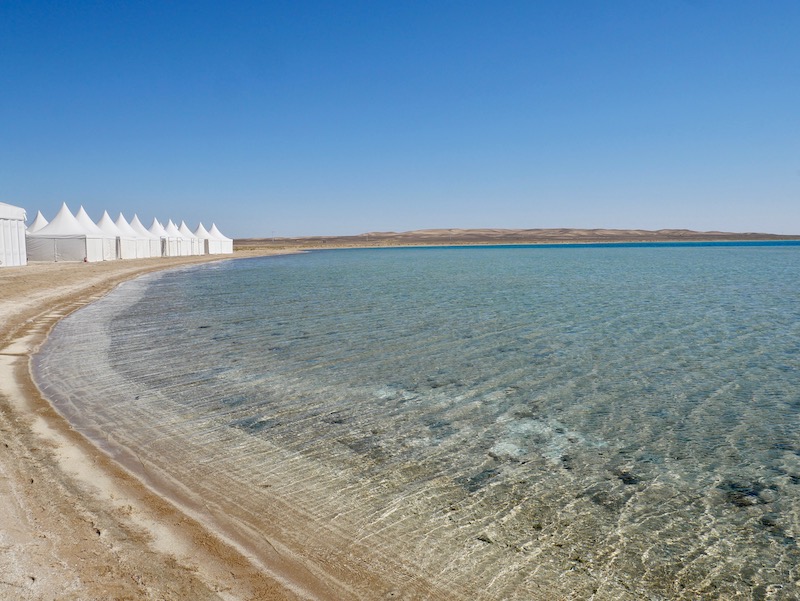 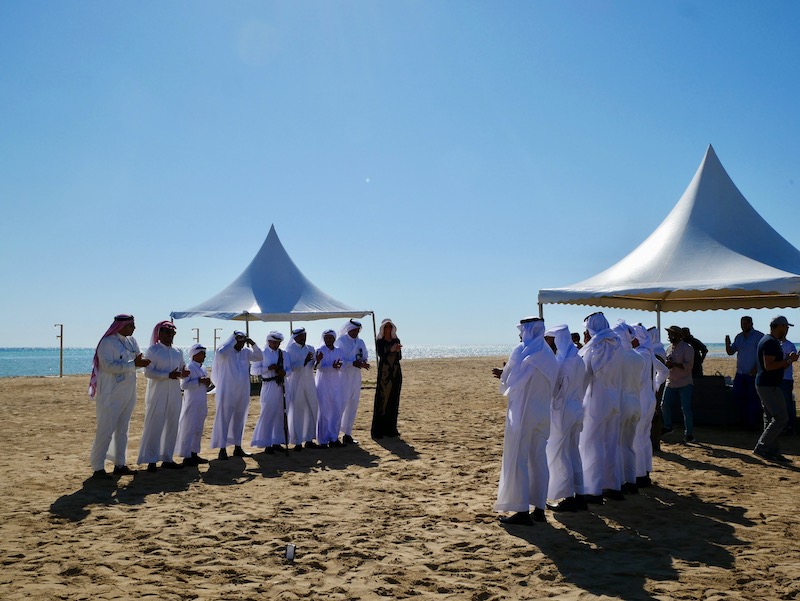 We boarded small boats and jetted out to a couple of the islands. I hadn’t brought my swimsuit as I had no idea it would be appropriate to go swimming, but many of the other people in our group did and they reported crystal clear snorkelling conditions with colourful coral reefs.

It was an honour to visit this area before any construction work for the luxury resort begins. It was like visiting the Maldives before any of those incredible water villas were built. It was beautiful but there was literally nothing there at all. I’m sure it will be a very different story in 10 years time! 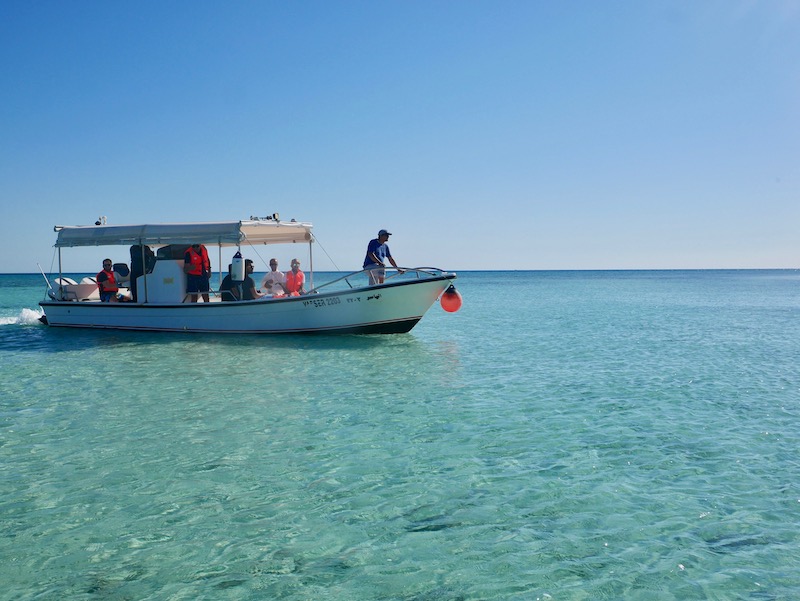 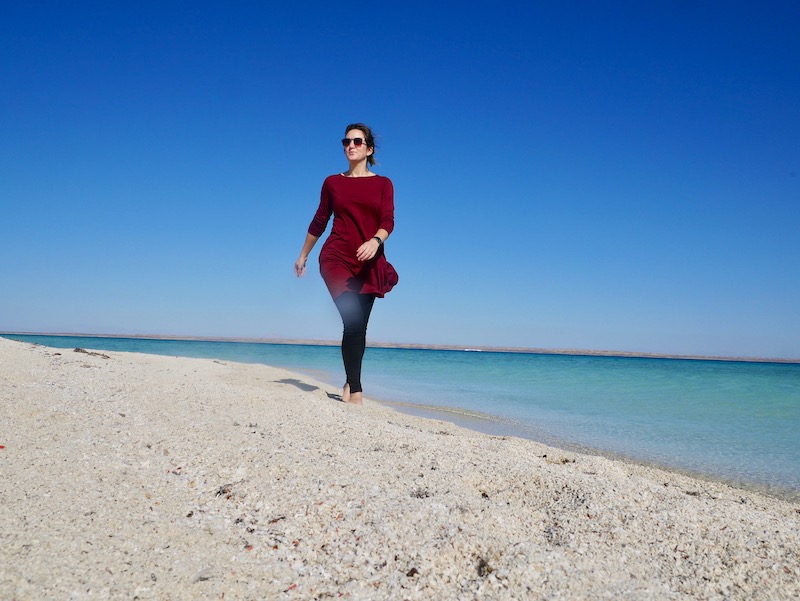 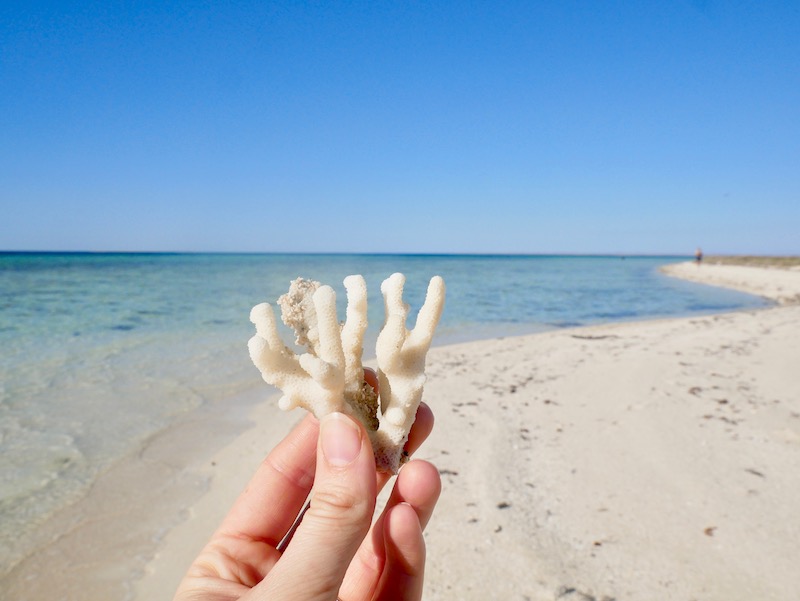 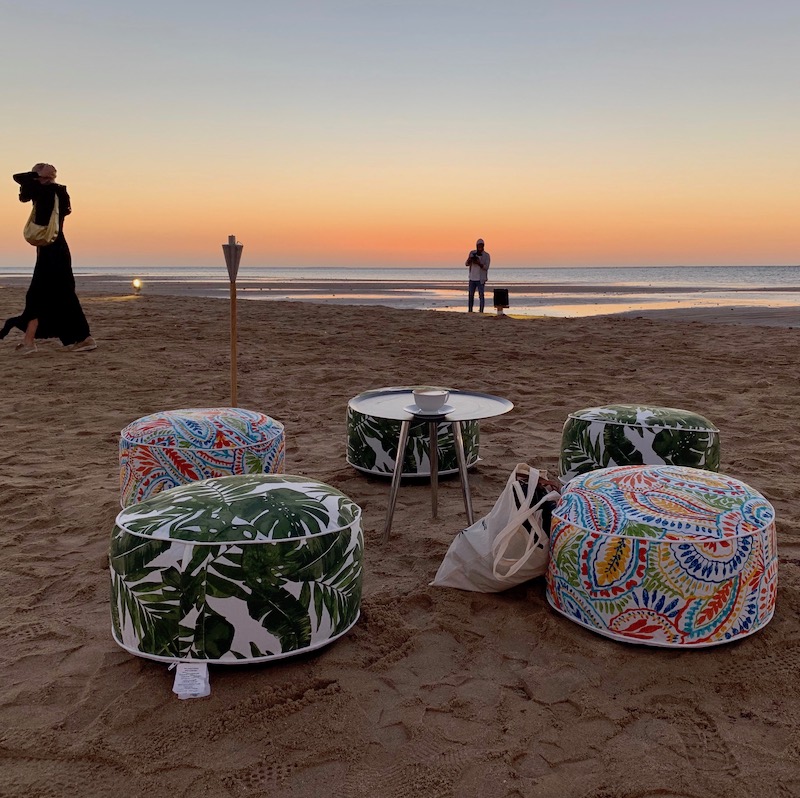 We flew back that evening and I was very happy to make it to my bed at the hotel.

The following morning some people from my group took an early morning trip to the desert to watch the sunrise over the sand dunes. I couldn’t face another day without sleep but the lovely Linda from Haus of Color sent me some of her photos and it looks incredible! 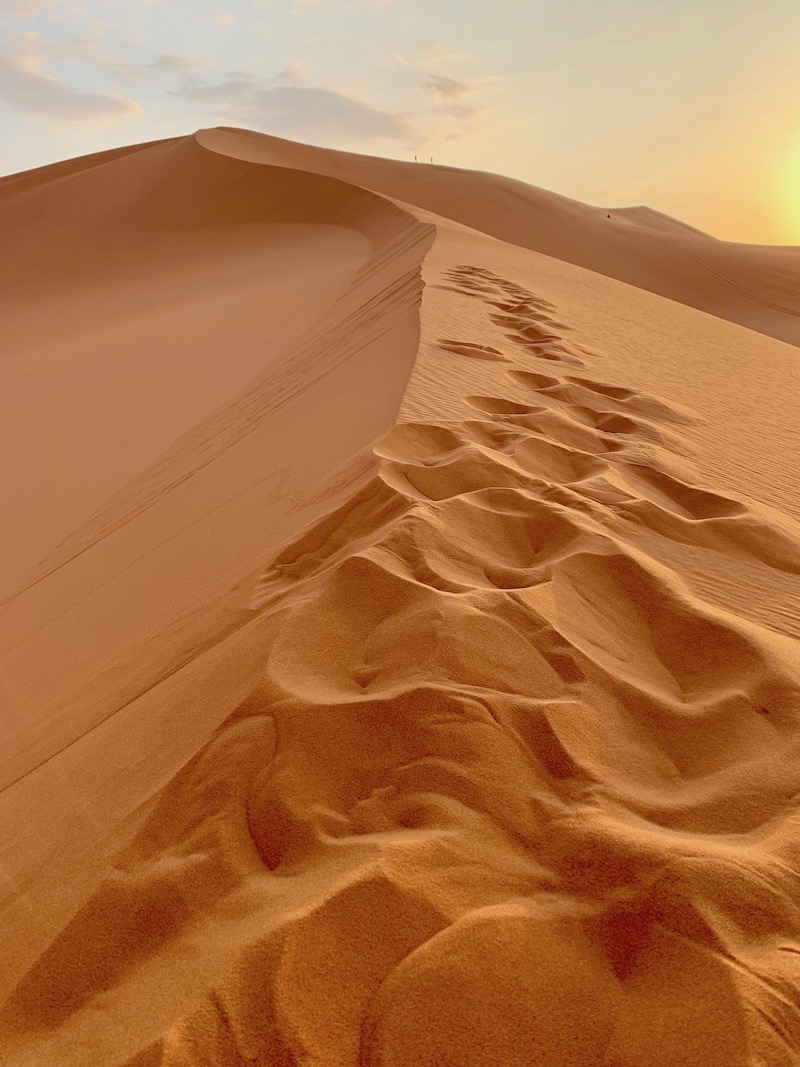 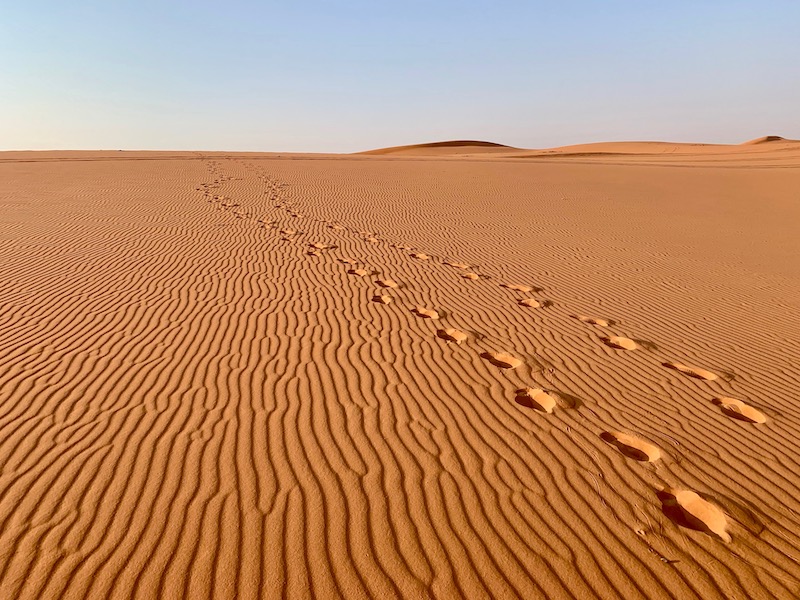 That afternoon we visited At-Turaif, an incredible UNESCO World Heritage Centre which was the first capital of the Saudi Dynasty and was founded in the 15th century. It was amazing and much of it has been recently restored and we were some of the first visitors to see it.

(I mostly have video from inside At-Turaif so I’ll share that as soon as I’ve edited it!) 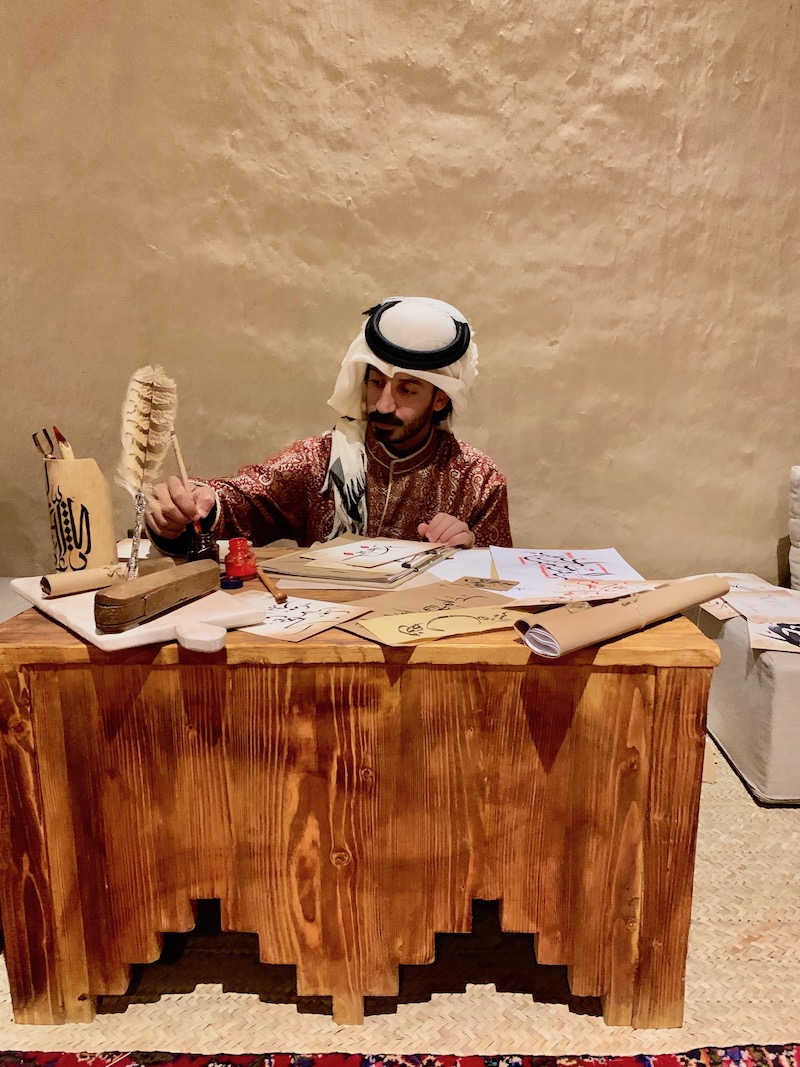 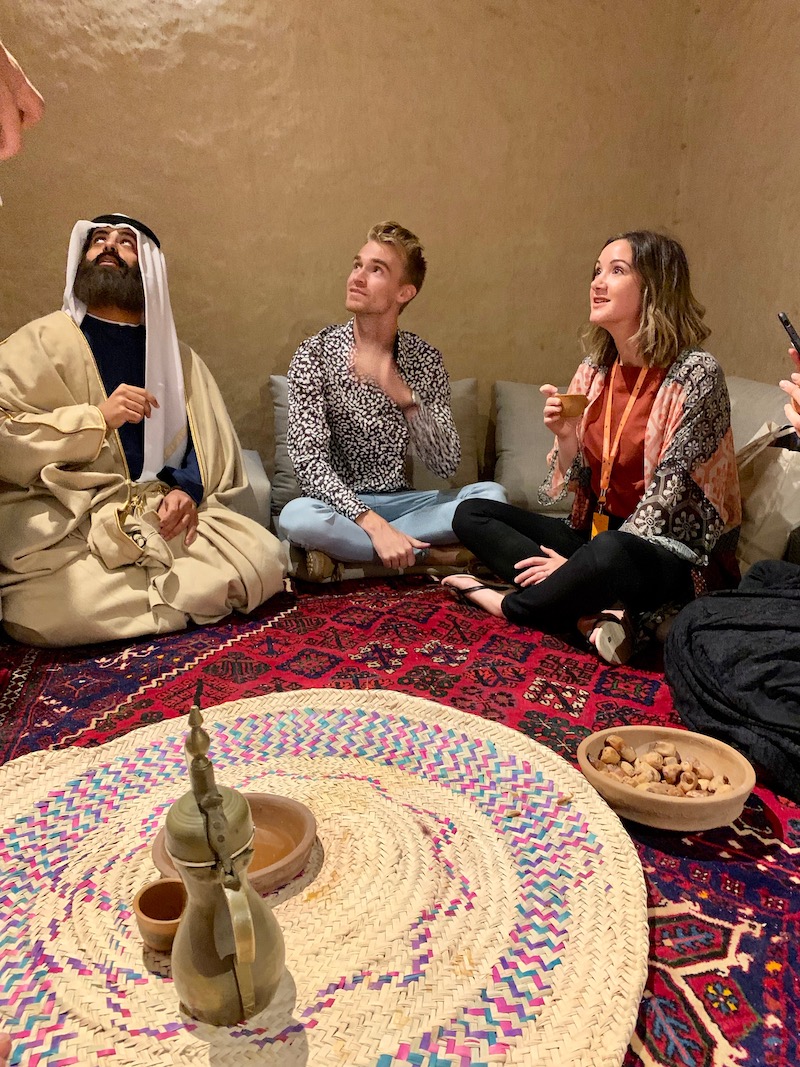 As darkness fell we were guided through the winding streets where people lived thousands of years ago. Actors lined the streets and crammed into every house and building to re-enact what life was like here all that time ago. We were dressed in traditional cloaks and got lost in the maze-like place as we wandered into the homes to see the traditional cultures and crafts.

That evening we went to a super swanky dinner in the government buildings. Now I’m not very good at spotting celebs or famous people but there were a lot of celebs at the event. I know one of the guys I was with bumped into the footballer Michael Owen! 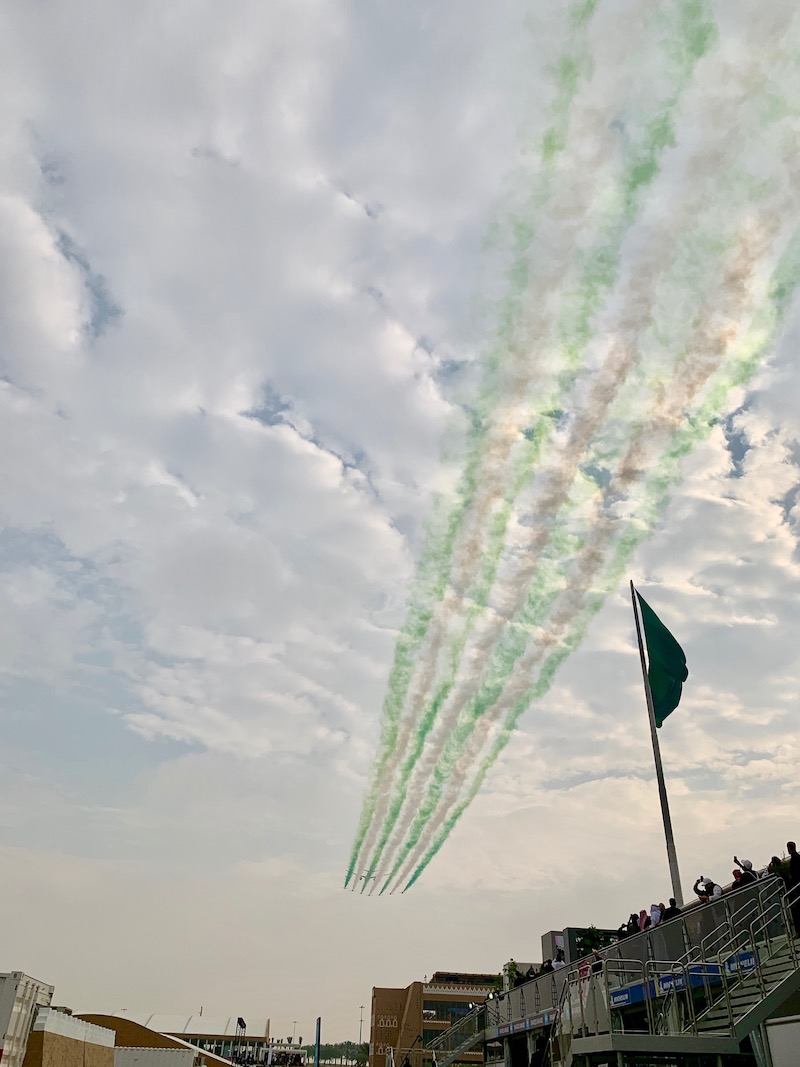 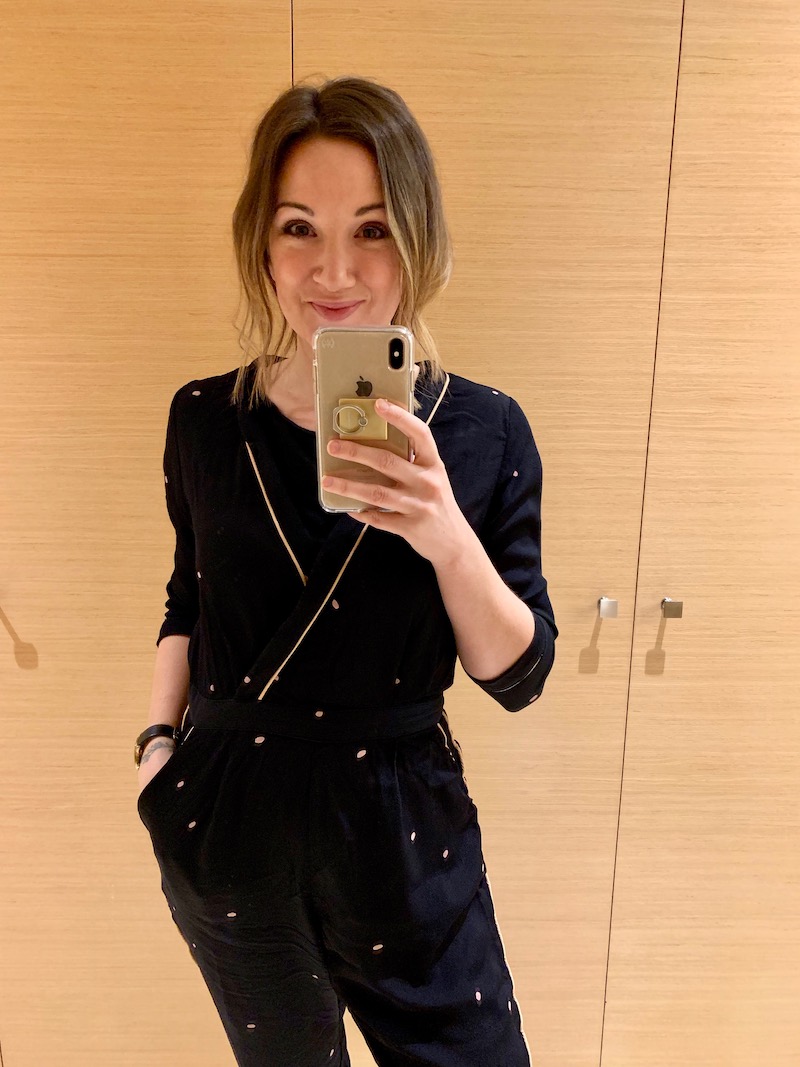 The next day was race day and what everyone was here for – the Formula-e race!

Sam is really into Formula 1 racing so I’m pretty familiar with it and know most of the drivers but I didn’t know a lot about Formula-e. We were able to go down onto the tracks and see the drivers and see the cars and we were in a special area during the race so we had a great view. I enjoyed the race, it was really exciting, but Formula-e will take a bit of getting used to. The cars are incredible but they’re so quiet. It was a bit like watching a movie with the sound off. I could see it all but not hearing anything was so strange. You don’t really what a huge part the noise of the cars plays in racing until the noise isn’t there! 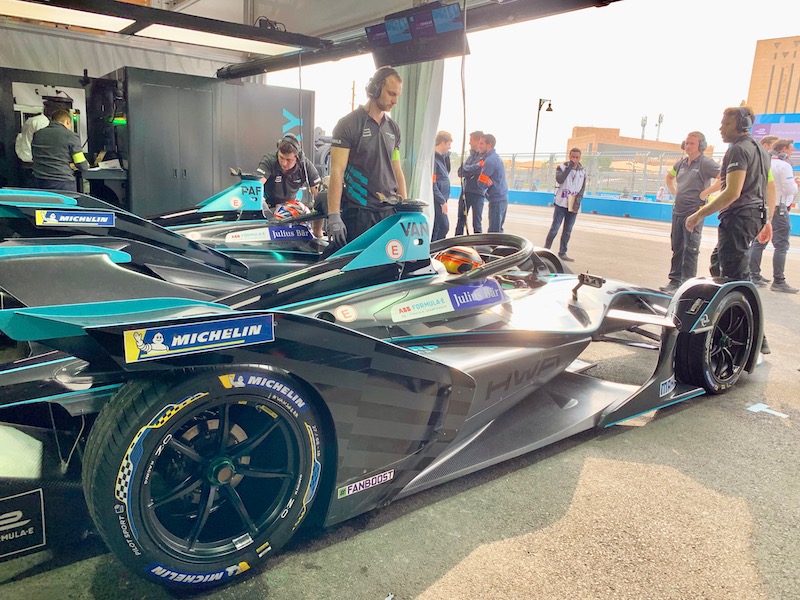 There was a gig that evening but unfortunately I had to leave early for my flight home but this was just the second gig in Saudi Arabia where males and females were allowed to be mixed in the crowd. The first gig had been a few days earlier and I spoke to a local woman about it and she was so excited!

‘It was incredible,’ she told me. ‘The band were amazing but the atmosphere in there was so good because everyone was buzzing.’ She skimmed her hand across her arm to demonstrate there was almost like an electrical current of excitement through the crowd.

‘You could feel the energy as everyone was so excited. This was a huge moment in Saudi history!’

I really wish I’d been there for that moment. I’ve since met a few people who were at that first gig and report the same buzz and an electrical excitement through the crowd.

I arrived at the airport – along with lots of celebrities, journalists and TV presenters! – and spent the next two hours scrolling through my phone looking at my photos and videos from the trip.

Saudi Arabia had been beautiful. It had been an honour to visit and see the country with my own eyes. The people I met were wonderful; they were honest, curious, funny and welcoming and, other than that moment when I got off the plane, I didn’t once feel uncomfortable or nervous.

This was a media trip and I was invited by the government so, obviously, I saw the best of the best but I’ve spoken to a lot of people who visited off their own backs and arranged their own trips and they had very similar experiences to me (without the private planes, obvs!) and reported that everyone was lovely and the country was beautiful.

Tourists can’t get regular visas into Saudi Arabia yet and it’s definitely not a country open or ready for tourism. I’m sure it will in the future and I’ll be interested to see how the country changes over the next 20 years and, importantly, how we perceive the country and how the media portrays it. 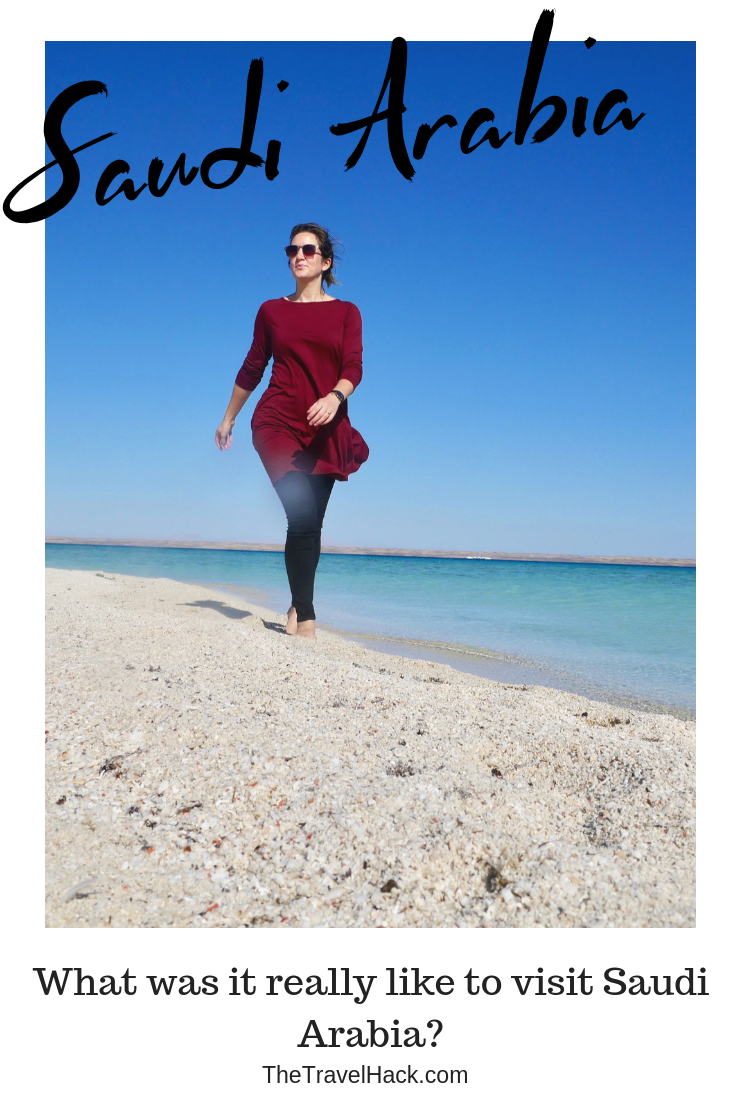