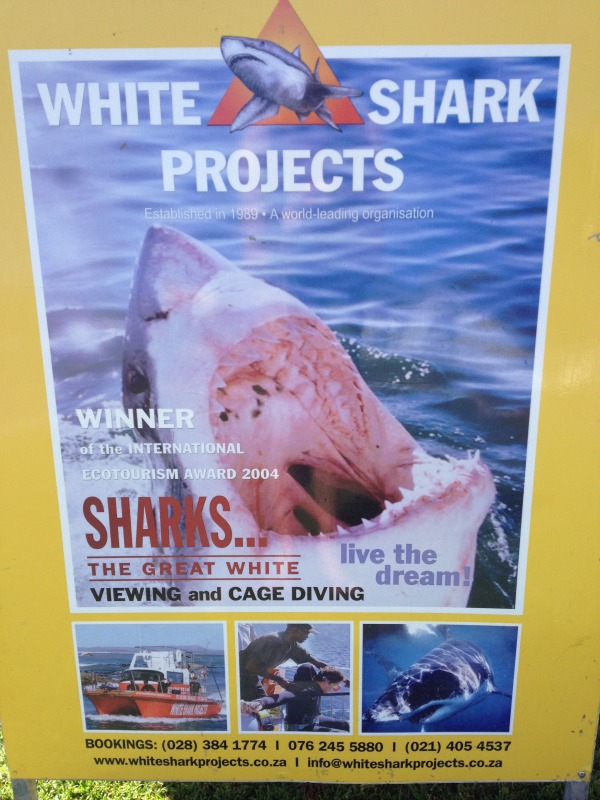 “Whatever you do, don’t put your hands through the bars. Don’t even rest them on the outside of the cage.’

These were the words of wisdom we were offered just as we lowered ourselves into the worryingly small cage. I must admit, I was expecting a bigger cage. Perhaps something so big I could hide in the middle of all the braver divers, but in a 6ft long by 2ft wide cage that holds five people, there really isn’t anywhere to hide. 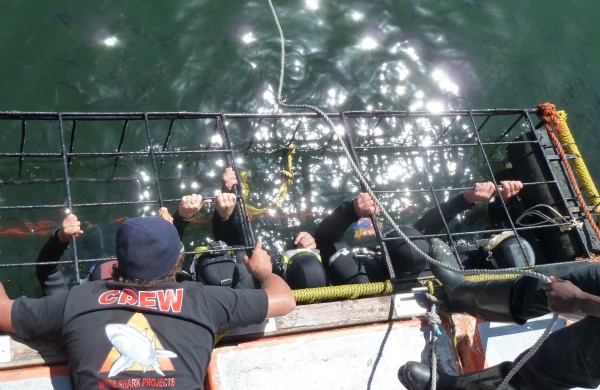 Donned in a 7mm hooded wet suit to keep out the cold Atlantic water, I slipped inside the cage ready to face one of the world’s most deadly predators, the Great White shark.

Diving with Great Whites has been on my bucket list for a while now but, in all honesty, I never actually thought it would happen. It’s a bit like running a marathon. I’d love to do one and a little part of me is pretending that one day I will, but there’s a bigger part of me that knows this is a big, fat lie. I can’t even run up the stairs, never mind a marathon. 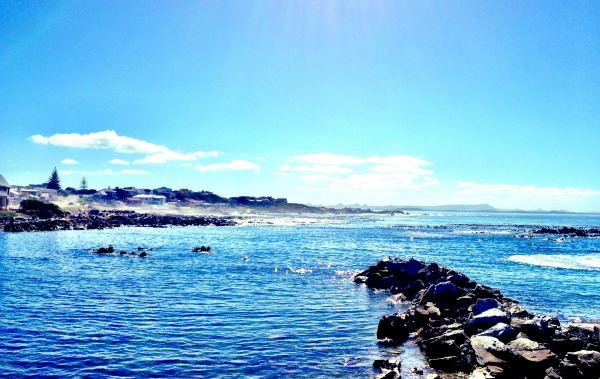 Clear, calm waters as we set off

Great White Projects is based in Kleinbaai, about a a two-hour drive from Cape Town. After a breakfast that I couldn’t help but compare to the last supper, we set out on the boat in search of sharks.

Top Tip: It was a rough ride so I’d highly recommend taking motion sickness medication for anyone that suffers. We were at sea for about four hours and it would be horrific to spend that time being sick. 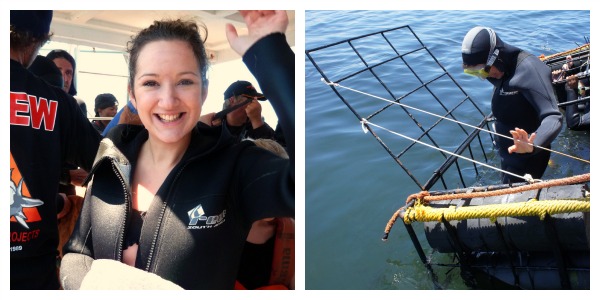 We entered the cage, which was attached to the boat, in nervous groups of five. I somehow ended up in the first group and we spent the first few minutes in the cold water practicing the drill for when a shark arrived. We had no snorkel or scuba equipment and simply took a deep breath and let the weights pull us to the bottom of the cage whenever a shark was close by. It was easy to stand on the bottom and hold onto a red bar that you rest your chin on to make sure your face is at the front of the cage to get a good view.

The crew on-board the boat would then throw swill into the water which was made up from sardine oil and fish guts. They also use bait, usually a tuna head, to attract the sharks and draw them close to the cage.

The crew do their best not to allow the sharks to actually eat the bait and just use it to attract them. This is so that the sharks don’t begin to associate humans with food, which would be highly dangerous for both the sharks and humans, but sharks can swim at speeds up to 60kph so, inevitably, the do manage to catch the bait sometimes.

Our skipper told us that every shark has a different personality. They’re inquisitive animals so will naturally approach the boat and the divers to see what’s going on. Some sharks are persistent and will chase the bait all afternoon while others will barely look at it or will quickly give up.

The skipper was proud of the fact that by running shark cage diving sessions he was given the opportunity to educate people about the sharks. He said they’re not the great killers they’re portrayed as in films, they’re simply inquisitive animals looking to find out what’s going on. Unfortunately, they might conduct their investigations via a quick taste test…

I was thinking about this just as I entered the cold water and had a Final Destination style premonition that involved the police telling my family I’d been gobbled up by a shark. Someone has to be one of that 4-6 statistic…. 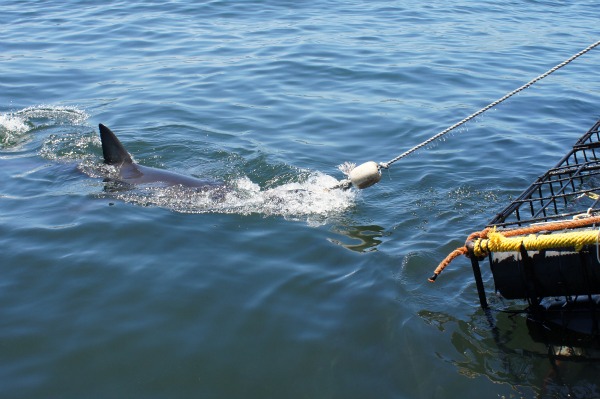 With a combination of the bait and the swill, it wasn’t long before a 12ft Great White was gracefully sliding past the cage. An enormous cry of ‘down’ was bellowed from the boat, telling everyone in the cage to dunk down into the water to get a view of the shark from below the surface.

In a frantic rush we took a huge gasp of air and pushed ourselves to the bottom of the cage. With starring eyes, beating hearts and tight lungs we clung to the red bar inside the cage and watched with terrified delight.

There is a splash, a huge flurry of fish that scurry out of the shark’s path, and through the bars you catch a glimpse. You feel the power and you taste the fear as you see something grey, pointed, smooth and gilled. You see the flick of a tail as it hits the cage, the glint of a beady eye as it swims past and the point of a fin as it breaks the surface.

At one point, a shark caught the bait as it was being pulled back in and it thrashed about just centimetres from the cage while it’s tail slammed into the side of us. 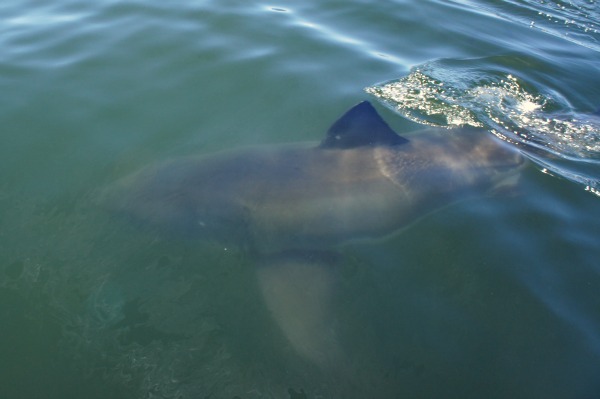 We’d escape to the surface gasping for air while everyone watching on the boat would be whooping and cheering.

In reality, you see very little when you’re under water but even if it’s for the briefest second, being face to face with a Great White Shark was one of the most incredible moments of my life.

Shark cage diving is a fantastic kind of fear, not dissimilar to watching a horror film in 3D. It’s so close, it’s so real and you’re so scared you can’t breathe but at the same time you know you’re safe. Unless you put your hand through the cage of course…. 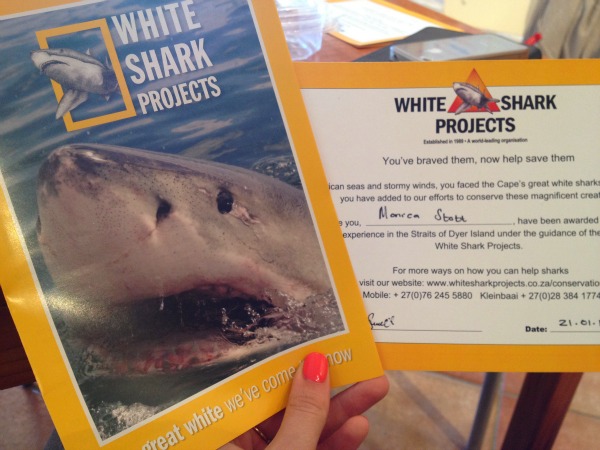 Massive thanks to the guys at Great White Projects for this amazing opportunity and for teaching me that lollipops are the best cure for seasickness!

Agreed, you are really brave to do that!

Thanks Amy. It was scary getting in the water but once you're in it isn't so bad. I'd definitely do it again!

This looks incredible! It's on my bucket list for sure! Love the way you describe your experience.

Thanks for posting this! Diving with great whites is on my bucket list (but I do fully intend to do it!) so it's great to hear from someone who's done it! It sounds fantastic!

Well written! A motivating account... think I might have to pucker up and do something like this one day too... Pity they didn't have snorkels / breathing apparatus for you...

Thanks James. I thought that about the equipment too. It would have been even more amazing with scuba diving gear!

Why should i o it

Thanks for the great article..