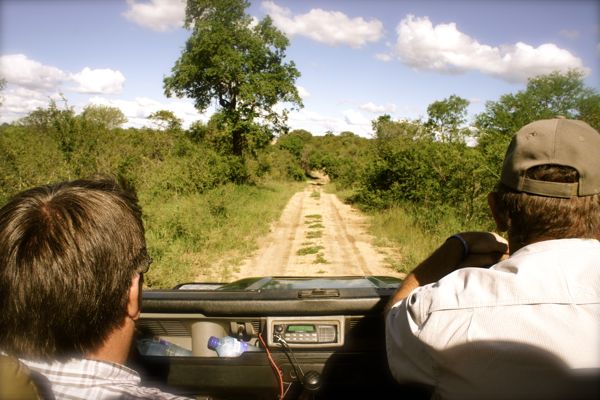 Cruising along in our 4×4

When going on safari, the thing that everyone is itching to see is the big 5.

They’re named ‘the big five’ because early hunters regarded them as the most dangerous animals to hunt.

While I was in South Africa I spent three days staying at Thornhill Safari Lodge in the heart of Central Limpopo Lowveld, Hoedspruit. The lodge is part of the Greater Kruger National Park and within two hours of arriving here we’d seen four out of the big five as well as zebras, giraffe, springbok and heaps more.

As soon as we arrived we jumped in an open top 4×4 and headed off into Thornybush Private Game Reserve. The reserve is home to 147 mammals, 114 reptiles, 507 birds, 49 fish and 34 amphibians so I felt like I’d just stepped inside a David Attenborough documentary. 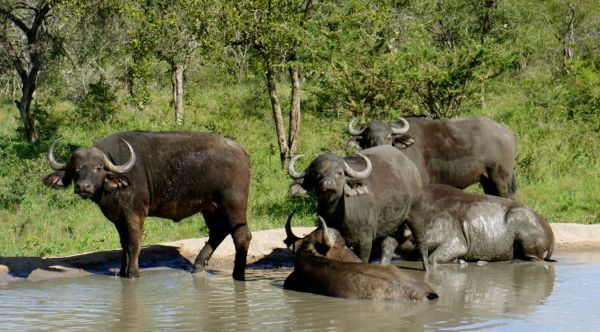 Within minutes of starting the game drive we were watching buffalos cooling off in a watering hole after a hot day in the park. They jumped up when we arrived but didn’t run away and stood watching us inquisitively. The two males slowly moved forward to shield and protect the females as we watched in silent awe. 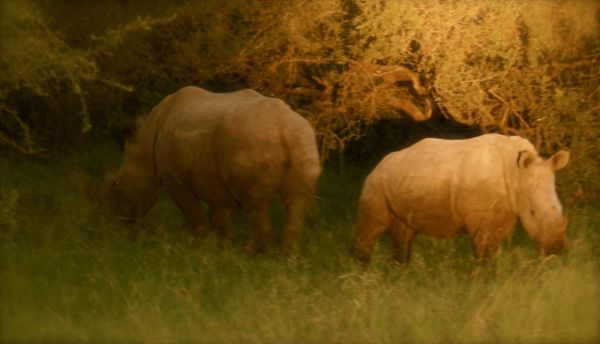 Rhinos are so dangerous because of their size and power but also because they will cleverly circle their prey before attacking from behind as they gorge the unlucky victim through the back.

Unfortunately, poachers are a real problem for rhinos. Their horns are incredibly valuable in the Middle East where they are carved into ornaments and sword or dagger handles. As poaching slowly decreases, their horns simply become more and more valuable for the rich Sikhs who will pay any amount for the products. Our guide and tracker were keen to point out that the buyers of the products weren’t 100% to blame for the poaching as they were just at the end of a violent and illegal cycle. It’s the poachers that need to be stopped and we saw posters and stickers everywhere in a bid to educate people about poaching.

In some parks, the horns are removed in the hope that poachers won’t attack the rhinos but the most valuable part of the horn is the thick base, which is below the surface, and the rhino is inevitably killed when the horn is removed. Our guide told us that poachers will kill a rhino just for this small but valuable stump of horn. 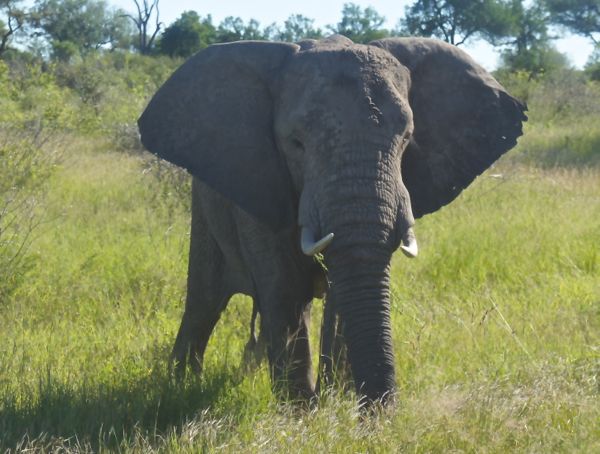 The majestic elephants were difficult to find despite their size and the destruction they leave in their wake. We eventually came across a small family of elephants who were munching their way through the trees and a baby was playfully frolicking with its older sister.

Elephant families are incredibly close and all the females will work together to look after the young.  The females stick together with just one dominant male and the younger boys will be pushed out of the group when they’re around 12. Just like human boys, it often takes a lot of encouragement to get them to ‘leave home’ and their mother’s side.

Our guide told us that he knew each and every elephant in the park and they even recognised his voice. Although he didn’t name them like pets, he recognised them through their size, colouring and features. Many elephants will have different sized tusks and this is because they can be right or left tusked, just like we’re right or left handed. Their dominant tusk will wear down over the years as they use it to break branches and push their way through the trees. 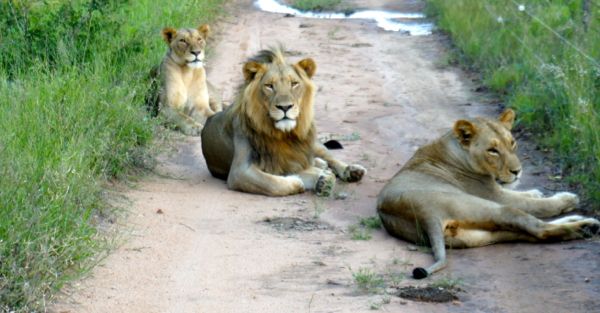 Just as our game drive was coming to an end, our eagle-eyed tracker spotted some paw prints in the ground that we eagerly followed until we came to this trio who are three-year-old siblings.

There is a fence around the reserve and on the other side stood a confused (and slightly stupid) zebra. If the lions were hungry they could have easily got through the fence but the zebra was lucky and they did little more than growl and stare.

It wasn’t until the following day when we entered Kruger National Park that we finally managed to see the elusive leopard. We were sat in our truck for at least 20 minutes trying to decide if we were staring at a spotted rock or an animal, but it finally got up to stretch and we strained our eyes to see it in all it’s beautiful glory.

Unfortunately, my camera wasn’t good enough to pick up more than a spotty blur and the photo above was taken in Moholoholo Animal Rehabilitation Centre where injured, orphaned and poisoned animals are cared for and reintroduced into the wild whenever possible.

If you’d like to see more of my photos from my three days in Kruger National Park, check them out on my Facebook page. Seeing zebras and giraffe was equally amazing as seeing the big five so you have to see those photos!

I flew to South Africa with South Africa Airways and stayed at Thornhill Safari Lodge for three nights which was part of an Intrepid Travel trip.

Highlights from 2013 | The Travel Hack

[…] Town where I swam with Great White Sharks and visited the top of Table Mountain before heading to Kruger National Park where I spotted the Big 5! My final stop was Johannesburg, a city that I loved and have made it a […]

This looks like a great deal of fun. In order to keep safari's like these open, we need to support stop poaching campaigns. Thanks for sharing, great shots!

Safari Style: What to wear on safari | The Travel Hack

[...] on safari. But I didn’t just go once, I went twice! My first was in South Africa where I spotted the Big Five within the first hour of hopping in the jeep. David Attenborough eat your heart [...]

Ah, my kids are dying to go on safari. You got very close to the animals, too - so lucky.

I was in South Africa a few weeks ago, at a conservation reserve - and learned a lot about poaching and canned lion hunting. Horrible!

I found the conservation reserves really interesting but so sad. I realised that poaching happens but I had no idea it was on such a huge scale.