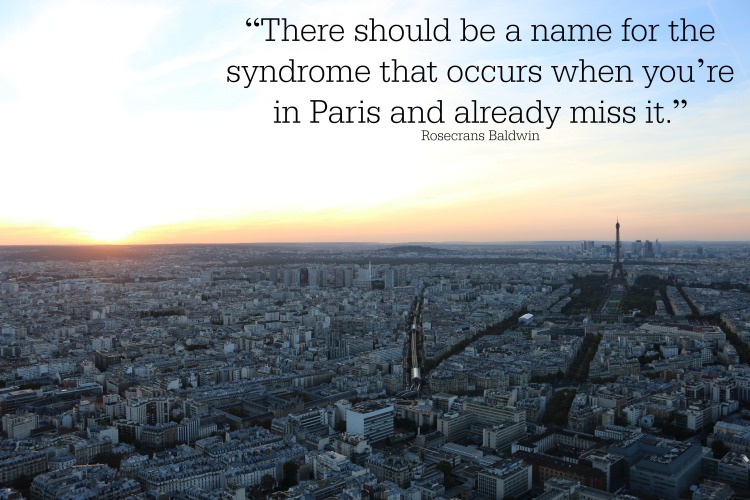 Mention Paris to anyone and you end up getting a mixed option.

“Urgh, I hate Paris. It’s dirty and crowded and too touristy,” some people will tell you.

“Oooh, it’s my favourite city in the world. It’s beautiful and romantic and has the best food in the world,” others will swoon.

While I don’t know if you’ll love or hate Paris, I do know it’s a city everyone should visit at least once.

I’m in Paris for the first time in 14 years and if you read my last post, Falling in Love with Paris, you’ll be able to see that I love it here.

As I hadn’t been since I was 12 it was basically my first time in Paris so it was all new and exciting.

Here are my first impressions from Paris and some things you’ll need to know if it’s your first time in the city.

The French have a reputation for not speaking any other languages – pretty much like us lazy Brits. But for Parisians this isn’t true and most of them speak pretty good English, particularly younger people.

If you ask if they speak English they’ll undoubtedly say ‘no’ but this is because they don’t want to be embarrassed by their not-so-perfect language skills.

Ask them if they speak just a little English and you’re more likely to be met with a positive response.

The people of Paris are so stylish. They have a classic elegance that goes beyond fashion and it can make you feel like a badly dresses heffalump in comparison. The way they walk, talk, eat, drink, smoke and breeze through crowds is just so damn sexy.

Pack stylish but casual clothes to fit in. Or, better yet, shop till you drop when you arrive.

Not only are the people sexy but the city is sexy. Everything about it oozes sex appeal from the beautiful buildings to the smoking hot bars and cafes. 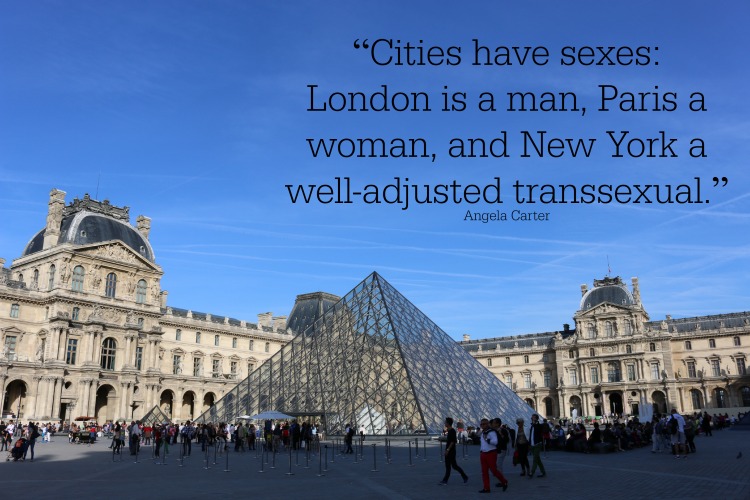 Not only are they well dressed but the Parisians also have amazing figures. Both men and women are slim and look really healthy. You might not notice this until you spot a tourist waddling down the street and you’ll see that they stand out like a sore thumb.

“Paris is the only city in the world where starving to death is still considered an art.”  Carlos Ruiz Zafón, The Shadow of the Wind

(The Shadow of the Wind is an amazing book if you’ve never read it.)

I often feel like London is a young person’s city. Maybe this is because I’m young myself but people often tire of London and move away eventually.

But Paris seems to be a huge mixture of ages and it’s often the older people who seem to be the most interesting. Many of them are impeccably dressed and often have an eccentric style that makes you want to follow them around and find out more about their lives.

That makes me sound like a crazy old-person-stalker but I just mean they look interesting and as though they have some good stories to tell.

“In Paris, women were not considered interesting until they were middle-aged.”  Peggy Kopman-Owens, The Mist of Montmartre

6. The street music is amazing

The street musicians aren’t just buskers like they are in many cities. Not that buskers aren’t talented but the musicians here are professionals and take it to a whole new level. There are often bands or orchestras playing in squares and parks and it’s well worth pulling up a chair to stop and listen.

OK, this is a weird one but in parks they don’t have benches, they have chairs. Everyone will pick up two chairs (one for their feet) and drag them to their perfect spot to relax for a few hours. It actually makes more sense because you can sit where you like.

Paris is like a labyrinth of narrow streets crisscrossing and winding and turning into different streets with no warning.

I recommend using Google Maps on your smart phone and dropping pins in all the places you want to go. You can then use GPS on your phone to track where you are. It’s all well and good having a map but they’re pretty useless if you don’t know where you actually are. 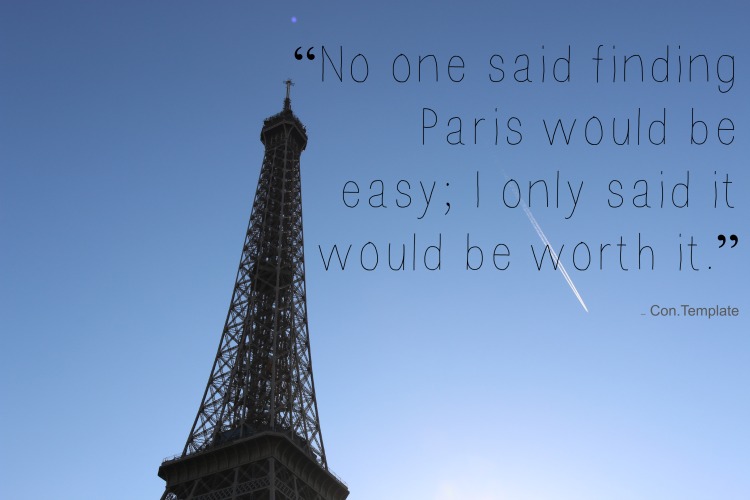 “People wonder why so many writers come to live in Paris. I’ve been living ten years in Paris and the answer seems simple to me: because it’s the best place to pick ideas. Just like Italy, Spain.. or Iran are the best places to pick saffron. If you want to pick opium poppies you go to Burma or South-East Asia. And if you want to pick novel ideas, you go to Paris.”  Roman Payne, Crepuscule

I took a trip up to Montparnasse Tower last night. At 210 meters high it offers one of the best views in the city and at sunset it’s incredible. And romantic. Sickeningly romantic. I was surrounded by happy couples kissing and canoodling and muttering sweet nothings in each other’s ears.

This is the city of love so be prepared for in-your-face PDAs. (If you’re travelling alone, cover your eyes.) 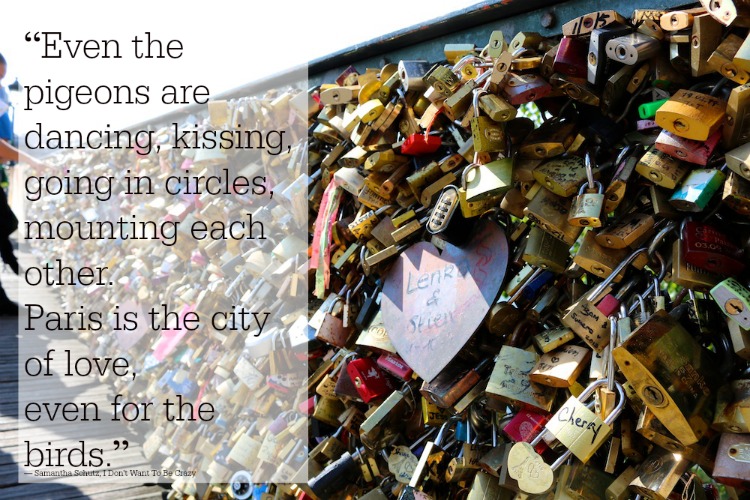 First of all, I never shop when I travel. I can shop in London, why would I want to shop when I’m somewhere new and exciting with so much to explore? But shopping in Paris is something else. Every shop window is like a magnet that pulls you back to drool over shoes and handbags and jewelry and clothes.

Don’t try and resist it, just prepare you credit card in advance. 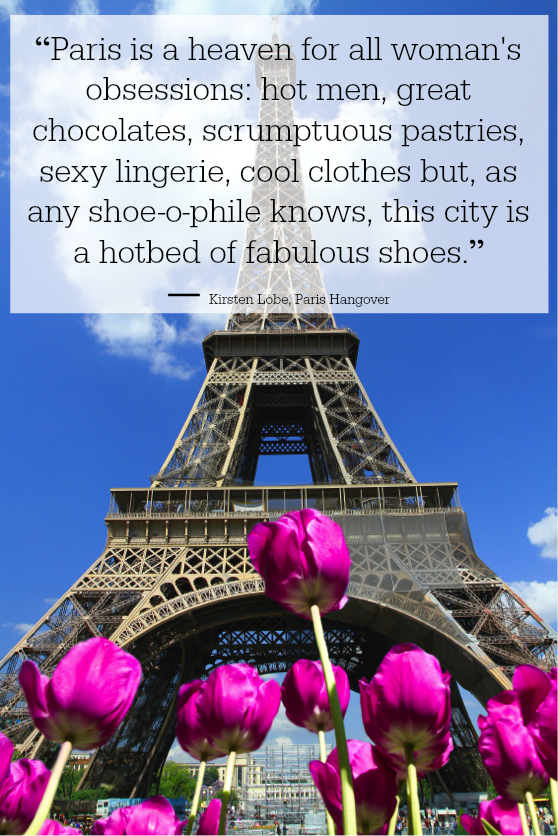 I know, surprising, right? I have no idea where the idea comes from that French people are rude but I can honestly say this couldn’t be further from the truth. Everyone I’ve met so far has been lovely and people are courteous and patient in the street.

13. Paris is a city for night owls

If you think Paris is beautiful in the day, just wait for the night. The city changes as the sun sets and the Eiffel Tower lights up and puts on a twinkling display. Cool cafes turn into even cooler wine bars and candle lit restaurants appear on streets you hadn’t even noticed.

“Night came on, the lamps were lighted, the tables near him found occupants, and Paris began to wear that peculiar evening look of hers which seems to say, in the flare of windows and theatre-doors, and the muffled rumble of swift-rolling carriages, that this is no world for you unless you have your pockets lined and your scruples drugged.”
Henry James, Madame de Mauves

Museum lovers will be in heaven in Paris. There are so many. (According to Wikipedia there are 153!)

You won’t be surprised by this one when I say the buildings are beautiful. I love the way many of the buildings are white so the city feels brighter and cleaner than London where everything is grey and dull. I think it helped that it was beautifully sunny while I was in Paris and, let’s face it, everywhere looks stunning when the sun is out. Even everyday buildings are stunning and it feels like a lot of thought and effort has been put into each one. 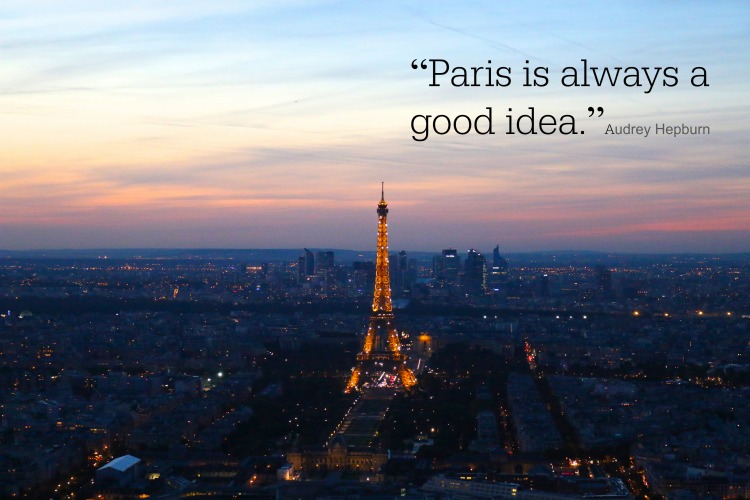 London cabbies, I now love and appreciate you even more!

Ah, French food! One of my favourite things about Paris.

One of the reasons the French are so slim must be because of the incredible food they eat. They’re not living on rabbit food either, just fresh food and lots of it.

Make sure you eat in as many brasseries and restaurants as you possibly can and, if you get time, take a food tour. I took a specialty food shop tour today with Wonderful Time and it was amazing. I’ll be writing about it soon.

People in Paris walk pretty slowly in comparison to what I’m used to in London. I’m not just talking about tourists here, everyone seems to have more of a laid back saunter to their stride. It took me a while to get used to but once I slowed my pace to the Parisian saunter but I felt much more relaxed once I did. 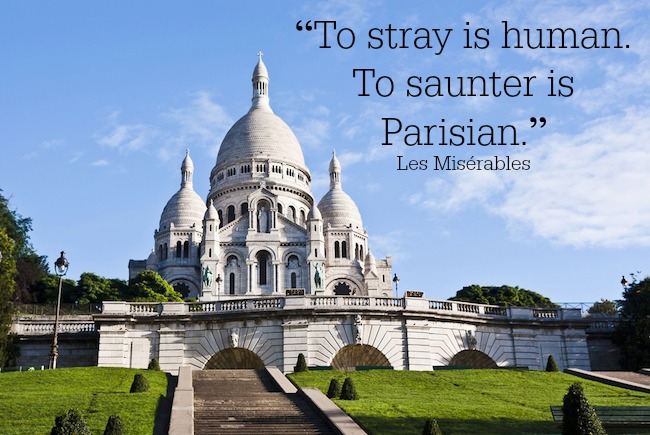 Paris is huge. There’s so much to see and do but it’s still small enough to feel manageable.

It’s a walkable city and, unlike London, you don’t need to take public transport or taxis too much. After three days I felt like I started to know my way around the main streets and I managed to see a lot of the main sights.

I think 5 days in Paris would be perfect but if you only have a weekend you’ll still have a great time. 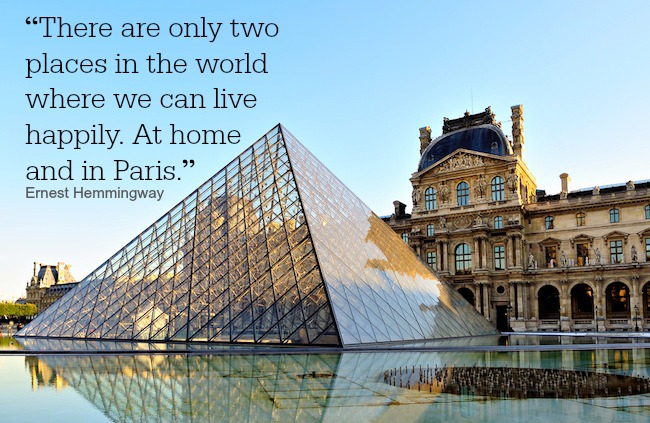 It’s a myth that the French live on frog’s legs and garlicky snails. I asked my guide from a foodie walking tour I took about it and she shrugged and said she wasn’t sure why people think they eat them all the time.

I’m travelling in Paris with Citadines as part of the Citadines Moments 30 competition. Four bloggers are competing in ‘the games’ and if you liked this post you can vote for me here. Merci!

Blog Books
It isn’t very often that you find a book you love so much you buy a copy for your friends before you’ve even finished...

France
Saint-Cast-le-Guildo was one of those places we accidentally stumbled across and then wondered how we’d never heard of it before. We visited on our final...

Blog , Family Travel , Travel Tips , Travel with a baby
While I was pregnant with George I read a lot about travelling with babies. I read tips and advice and a million and one...