What’s the difference between a blogger and a journalist?

This question has cropped up a lot recently, particularly with the recent case of Crystal Cox, investigative blogger, who was sued $2.5 million for libel because she wasn’t protected by the same defence that journalists receive when taken to court.

It’s a question I’ve been thinking about too after my recent trip to Sweden where both bloggers and journalists attended the press trip together.

I’m blogging and also studying journalism so I feel as though I have one foot in both industries. At first I hadn’t realised that there was such a debatable divide between the two professions but as print publications plunge into the world of social media, blogging and multimedia interactivity it seems as though they’re coming together and we’re soon going to collide in the middle.

Bloggers are keen to highlight that what we do is actually very similar to journalists but journalists are not so keen for the association.

During my journalism course we barely even talk about blogging, despite the fact that it is the best way for a trainee journo to get their name out there. Our tutors know very little about blogging and it’s their ‘blogging has nothing to do with journalism’ attitude which is leaving many print publications stuck in the dark ages.

I’m not suggesting that blogging and journalism are the same because they really aren’t. But as the lines between online and print journalist merge and print slowly fades away, surely we should be working together and learning from one another to make a stronger industry of multimedia professionals?

Traditional journalists can learn alot about social media and immediacy and interactivity that bloggers can provide, while bloggers also have a lot to learn from journalists.

Journalists (on the most part) are well respected due to the research involved in their work and the high standards each article has to pass. I know that blogging isn’t about searching through history books to get an old reference or quote but that doesn’t mean that we can’t do our homework and make sure our work is to a high standard.

So how did the bloggers and journalists mix during my trip to Sweden? 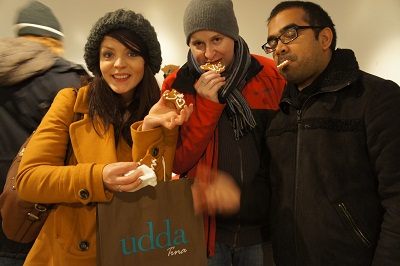 I was really excited to be around professionals (whether they were journalists or bloggers I didn’t care) and have the chance to pick their brains and get some tips – so a massive thanks to Abi, Kash, Chris and who really helped me out and gave me some great advice.

The one journalist on the trip was very ‘old-school’ journalism. She didn’t own a mobile phone and carried nothing but a small notepad and a pen. She was both fascinated and horrified in equal measure by our obsession with Twitter and Facebook but she was intrigued to see how it was done.

It was great to have her on the trip, she reminded me that sometimes you need to put down your camera and your phone and just experience a place. Grab a notepad and pen and write stuff down in the old fashioned way and sometimes that’s when you find the best story.

Many people are intimidated by gadgets and gismos but a friendly smile and a trusty moleskin will get you a long way.

What other ways do you think bloggers and journos can learn from each other?

[…] Bloggers Vs Journalists: how we can learn from each other // by Monica Stotthttps://thetravelhack.com/blogging/bloggers-vs-journalists-how-we-can-learn-from-each-other/ Can Studying Journalism Help Travel Bloggers? // by Monica […]

Having just started my own travel blog (which I originally wanted to use as a stepping stone to get leverage into the world of travel journalism), I find all these comments very intriguing. I have been very careful to ensure my blog posts are polished and professional, should I ever be scouted by a media agency deciding whether to publish my work in the future.

Your post, and the comments, have surely given me food for thought - where is the industry going? Obviously, all media is headed online, but - as Paul says - if attention spans are so much shorter online, what does this mean for quality of content? Will we lose feature articles altogether? I do think that would be a sad thing. I love to immerse myself in a well-written feature, and I enjoy writing them too.

Sure poses a lot of questions for a beginner blogger such as myself. Thanks!

Hey Maddycat, I'm really glad this has given you something to think about.

I don't think longer features will disappear all together; there will always be room for well written stories whether it's online or in print. I think it's a really exciting time to be working in the industry because it's changing so quickly and no one is 100% sure where it will go. And the devices that we use to read online content are changing too. I used to read most blogs on my phone where my attention span was admittedly pretty short. But I now read more and more on my iPad which I use in a very similar way to a book so I love reading longer articles and features.

Will - My Spanish Adventure

I can't imagine how journalists would still want to be journalists in this day and age when they can leverage the web, be much more creative and make more money in the process!

Interesting to see how you rubbed shoulders though!

Totally agree, at the end of the day it comes down to making money and as more readers turn to the Internet so do the advertisers so the journos really need to catch up. I know that a lot of journalists already are, it's just that most of the them are taking their time about it.

Agree with Gem completely. Social media use by local papers is pretty much criminal.

Great post indeed Mon, really struck a chord with me. Like you I recently did the NCTJ multimedia diploma in journalism but there was very little if any social media element to the course. Everything was catered towards print journalism, in particular, local news which is exactly where I ended up going. Although it was a good start to my career, in terms of new gathering etc, I learned nothing about social media or how it could help. The paper had a Twitter and Facebook account but that’s where it stopped and there was a definite lack of interest in trying to embrace new technology. I don’t know if it was being scared of the unknown or whether there was a touch of ‘snobbery’ but it was a massive shame. Local newspapers have a very limited career ahead of them and by using social media they could have connected more with communities on a hyper-local level and gained more readers. Journalism and social media are now so linked they both have to work with each other and the NCTJ (the UK’s national journalism teaching body) should definitely take note and make sure they teach this.

Thanks for your comment Gem. It's defo down to the NCTJ to change things at the mo otherwise there will never be trained journalists with any proper online skills. Sure, you can pick the up for yourself but there are people on my course who don't even know what a blog is, they don't know how to use Twitter and they have no idea what SEO is.