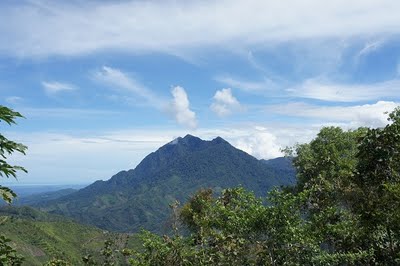 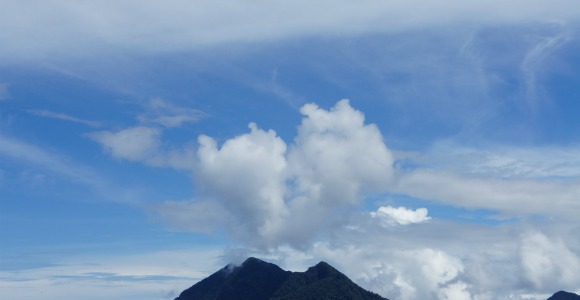 Mount Kinabalu is in the highest mountain in Borneo and the 20th highest mountain in the world. It stands tall and proud at 4,095 meters high (13,459ft) and is an 8.7 kilometre trek in total. Most people prefer to spread the walk over two days and spend the night at Laban Rata Guesthouse which is two thirds of the way up. 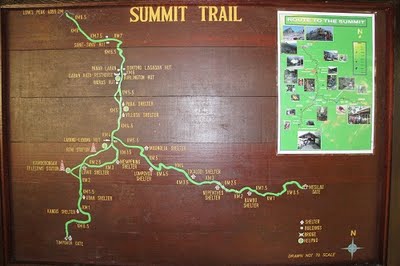 The walk was tough but manageable. I must admit that it’s easy for me to say that now, now that I’m back on flat land and this is just a distant and entertaining memory. If I wrote this post at the time of the climb, I think you would have a completely different story! 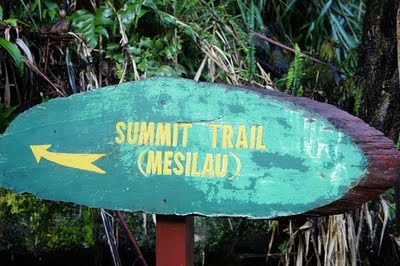 I have to tell you that I’d been travelling for 17 months by the time we did this climb and I hadn’t done a single second of formal exercise since my departure. I’d read that you need a ‘moderate level of fitness’ for the climb and I arrogantly thought that my youth automatically gave me free access to The Moderately Fit Club. It doesn’t!
For the first few kilometres I’d tried to keep my huffing and puffing to a minimum, embarrassed by my lack of fitness and how badly I was struggling. But by the 4th kilometre, all modesty had evaporated into the thin air and I gasped at the oxygen greedily, making more noise than the wind that pushed against our tired bodies. 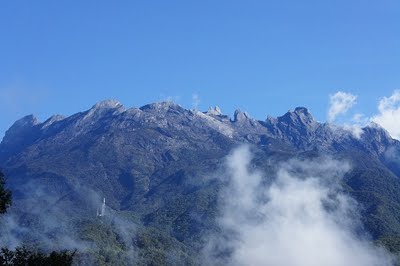 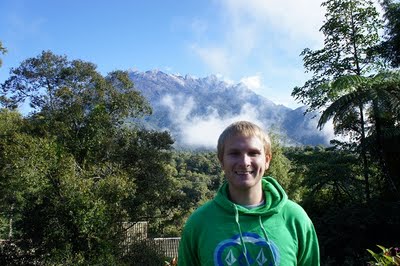 I tried to focus on my breath, thinking of nothing but inhaling that clean, fresh air and quickly exhaling so I could gasp at some more. I ignored the burning in my thighs, the tightness in my lungs and the pounding from my heart. However hard I tired, I couldn’t ignore the feeling like a huge bird was rapidly beating its wings inside my chest. It was flapping and flapping with every ounce of energy, desperate to escape to freedom.
I trudged on, one foot in front of the other, hands grabbing at wet rocks, branches, sticks or anything I could use to pull myself up the steep rocks and give my legs a momentary break. 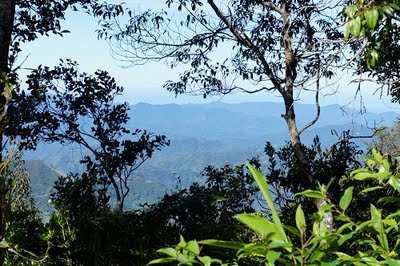 It was a shame really that I was so focused being able to breathe because I barely had chance to take in my surroundings. 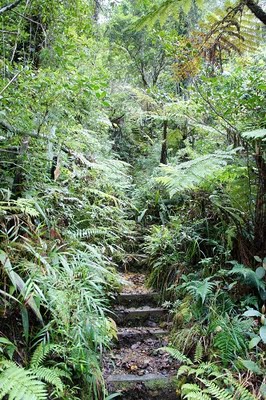 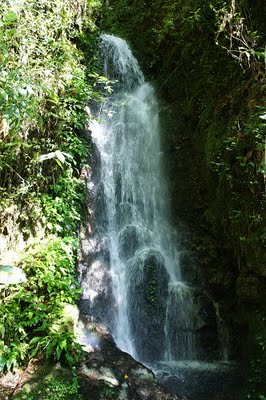 I remember that with each kilometre our environment seemed to change subtly. The first kilometre was like a regular forest; there was a huge waterfall that splashed us with fresh spring water as we dashed past – still full of energy and enthusiasm. The earth was dark and muddy and sucked our shoes into the ground. The trees were tall, green and leafy and the birds provided perfect background noises to our trek. 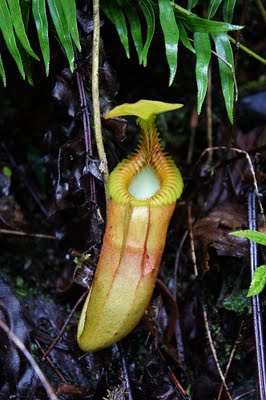 By the second kilometre, the trees became sparse and by the third, the soft muddy earth had become thick, clumpy orange clay. There were far fewer trees and very little wildlife. 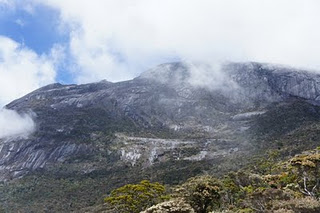 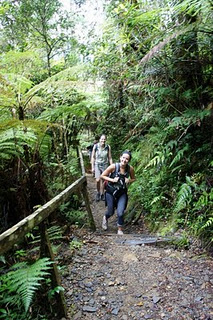 It was when we reached the 4th kilometre that it became tough; the rocky steps were replaced by giant steps set out by tree roots and boulders and the incline became so steep that, in places, I used my hands to haul myself up. Our rest stops became more frequent, Halle’s singing (our cheerful guide) became quieter and our banter and chit chat stopped all together and was replaced by the heavy huffs of our breathing. 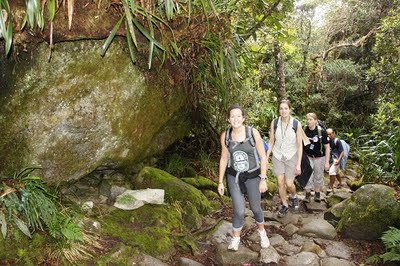 The mist spread itself across the mountain, giving it an eerie, mysterious feel. Bonsai trees crouched low to the rocky ground and kept their bare, black branches close to their little trunks while the mist crept between them. The wind charged around us, beating our faces and biting the tips of our fingers and toes and there was absolutely no wildlife to be seen. 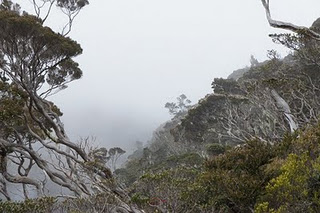 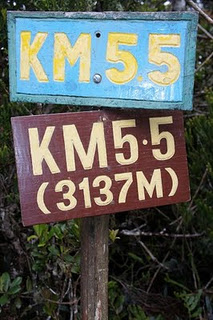 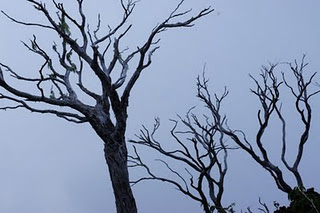 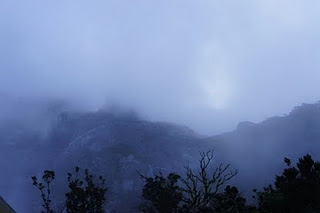 I stopped thinking of the mountain in terms of kilometres and starting thinking of it more like levels. As in levels on a computer game. I think the altitude was getting to me! Each kilometre we walked was another level completed. 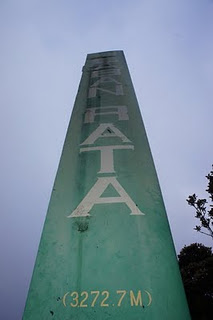 Once we’d completed the evil land of level 5, we reached level 6, my favourite level. This level was tough but there was a lucky bonus at the end – Laban Rata Hut were we had a cosy dorm room, endless cups of tea and mountains of food was waiting for us. 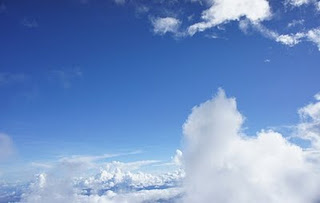 If this level were in the story, it would probably be heaven. The sky was so blue I felt like I could stare at it all day. We were level with the softest, fluffiest white clouds I have ever seen. They were almost blindingly bright at the sun dazzled off them and provided a thick carpet of clouds that blanketed the sky around us. 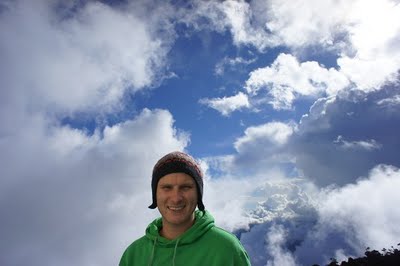 If you managed to tear your eyes from that sky for just two minutes, you’d become even more entranced by the peak of the mountain that pierced the sky like a dagger. The sheer white and grey cliffs loomed high and luminous above our heads as the sun bounced off them like it would off the pure, snowy peaks in Europe. 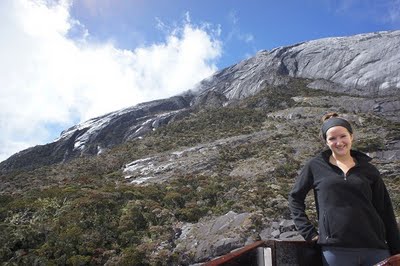 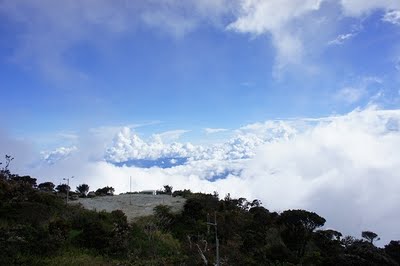 Dinner was served at 5pm and I was asleep by 5.31pm. With the exception of being ill, I’m sure this is the earliest I have ever been to bed. The only problem was that I was awake again by 7pm with a banging headache and everyone in the room was wide awake and tossing and turning in their squeaky bunk beds. I’d read that it is difficult to sleep on the mountain due to the altitude and most people claimed they didn’t sleep at all that night, but from all the snoring I was listening to, I don’t believe it!
Stay tuned tomorrow for the second installment of Climbing Mt Kinabalu Day 2. Tomorrow is when we reach the peak at 6am and the beautiful photos as the sun rises below the clouds.
Click here to cancel reply.

Ohmai!!! I really love your sweet sharing regarding your experience hiking at Mt. Nabalu. I was googling and searching any blogs regarding this which can give me any tips/advice, and I found your blog. I'm not a hiker but Mt. Nabalu is one of my wishlist while I'm still wild and young hahaha! I'm planning to do this activitiy early of July next year, and I'm so super duper excited! Thanks for sharing which you make me more excited!

What shoes should I take travelling?

[…] guess this is personal preference but, personally, I can hike up a mountain in trainers. (I actually climbed up Mount Kinabalu in trainers and jeggings. Remember jeggings?) If you’re planning to hike up Everest then of […]

I can definitely identify with you on this. I felt the same way given I attempted this after 8 months of travel during which I was not exercising at all compared to what I did at home. I actually did the whole climb in one day, which was brutal! So worth it and so beautiful, though.

Wow! Good on your for doing it in one day. I definitely couldn't have done that! Even two days was tough but, as you said, definitely worth it!

[...] free to go wherever they want whenever they want is a memory that will stay with me forever.3. Climbing to the peak of Mount Kinabalu in BorneoClimbing any mountain is usually one of the things that is better in retrospect. I’m just glad [...]