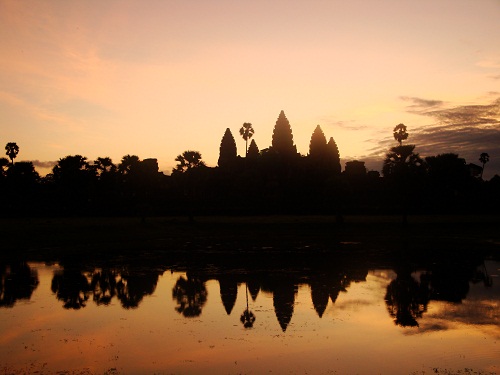 At 4am on a misty and dark morning, we discovered that watching the sun rise over Angkor Wat was an extremely popular thing for tourists to do and hundreds of people were flocking to a place where they’d get a good view. I was disappointed at first; this was meant to be a really special moment and it didn’t seem as special being part of such a big crowd.
Please excuse me for me being so ignorant but I really hadn’t expected the flock of tourists. I thought that watching the sun rise over such an amazing scene would be a unique, once-in-a-lifetime experience but it started to feel like a trip to Blackpool as we trudged together through a pitch black, crumbling building that was lit by the harsh, fluorescent glow of modern mobile phones, held low to spot cockroaches and worn down steps.
We blundered along together, feeling our way in the darkness then across the damp grass to a derelict building where we plonked ourselves down on the cold steps and sat in the dark, surrounded by strangers, nattering in every dialect.
At first it didn’t feel as special being part of such a big crowd and I was starting to wish I’d stayed in bed when the sky slowly started to lighten and a hushed, expectant silence fell all around us. Slowly we could actually see where we were sitting and began to really appreciate our surrounding. (And started to wake up so I wasn’t so grumpy).
I realised that we were sat at the foot of an ancient building, maybe thousands of years old, between two massive pillars that towered above my head and supported an intricate and detailed monument over the doorway to the massive building. It was worn and blackened in places but amazingly grand none the less. I noticed that my step was well worn and smooth from hundreds of years of countless footsteps up and down. 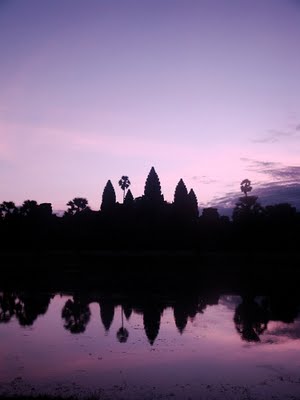 I took photos as the sun rose behind Angkor Wat, illuminating the sky from white to pink to blue which slowly got brighter and brighter until we could finally see Angkor Wat in it’s glory. Our spot on the steps was perfect as large pond was just in front of us and the reflection of the temple in the water hovering in front of the real deal made it twice as impressive. 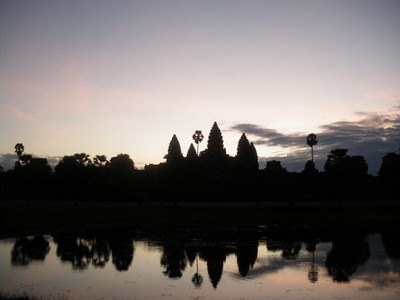 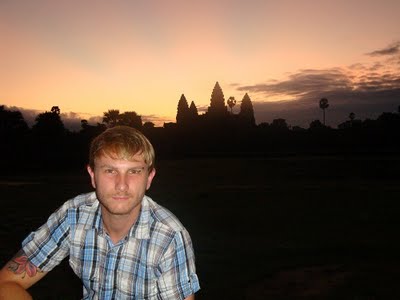 Total silence had fallen over the crowd which actually made the experience more special by sharing it with so many people. That kind of clam, peaceful silence while so many people are present is an experience in itself. I noticed that the Cambodians who were present also had the same amazed and silent expression which was mixed with a look of pride as they showed off their nationall treasure in it’s best light. Our tour guide may have seen this view everyday for 10 years but he was equally as appreciative of the view as we tourists who were seeing it for the first time. 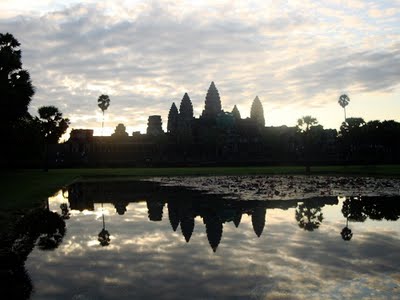 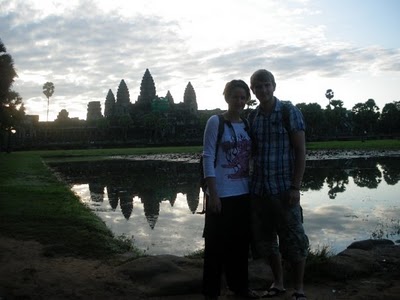 I have no idea how long we sat there but after a while we heard the bells that signified that the monks were awake. After a while the sounds got louder and we began seeing people emerging from behind the trees. They walked slowly, mostly in single file and they weren’t just monks but ordinary Cambodian’s too. It was kind of eery seeing them all coming out of nowhere and as they got closer I noticed that they were all well dressed and carrying an empty bowl. I was a little confused but assumed that there must be some kind of fancy camp behind the temple and these people were walking to a place to eat their breakfast.
We later found out that I was totally wrong and while we were in Cambodia there was a religious festival called Pchum Ben, Cambodia’s Festival of the Dead. The festival occurs in the 10th month of the Cambodian based calender but there was one day in particular, the 15th day of the month, which was today, that was the most important.
On this day, Cambodians wake up at dawn, walk around the temple 3 times and then offer food to deceased relatives who walk the around during the Festival of the Dead. They do this in return for blessings from their ancestors and they also light candles to help the spirits find their food. They believe that the spirits will be unhappy and haunt them otherwise.
So this is what the people emerging from the trees were doing. We were lucky to have been there on that particular day and saw the end of the ceremony.
Once the sun had risen we walked around the gardens , past the many cute little kids selling postcards. One really cute little boy had given up on the postcards and was singing at the top of his lungs. He was only about 4 and I’m sure he earnt more money singing, particularly because he latched onto groups of tourists and followed them on their tour, singing all the way.
Our guide took us around the temple and told us all about the history and the intricate carvings that lined the miles of wall space. there were signs saying ‘Do Not Touch’ but everybody did which was a shame because you could see where the walls became shiny and worn from the thousands of curious tourists who couldn’t resist a quick feel.
Click here to cancel reply.

[...] and carrying bowls of rice. At the time I was just really confused, but if I’d known it was The Festival of the Dead I would have appreciated this unique experience.I forgot my passportHave you ever had that sinking [...]

[...] took this photo over 2 years ago at Angkor Wat. I’m not a morning person at all so I rarely manage to capture a sunrise picture but getting [...]

>Wow, truly gorgeous shades, pretty understandable tourists go there aplenty, who would want to miss such a spectacular view? ;)