Skip to Content
If you missed out on Day 1 of my epic climb, you can catch up here: Climbing Mt Kinabalu Day 1.
We got up at 2am, a horrifically unnatural time to be woken up and to eat a plate of fried noodles. Fortunately, I’m a big fan of noodles, no matter what time it is, so I ended up with more than my fair share. The reason for such an early wakeup call was so we could get to the top of Mt Kinabalu in time to watch the sun rise and there was less chance of cloud blocking the view at this time of the morning. 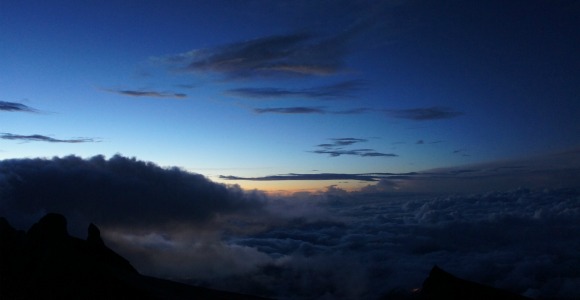 By 2.40am we were wrapped up warm and were blinding each other with our head torches. Everyone left the hut at roughly the same time so we ended up with a row of about 30 people all bum to nose in the darkness as we trudged up a set of man-made steps that were carved into the rock.
Within minutes I’d worked up a sweat and was desperately trying to break free from the line to strip off my layers.
The line of sleepy people moved like robots on a conveyor belt, automatically dragging one foot up to the next step. Our head torches were lowed to the ground as we carefully negotiated each wonky step and figured out which tree branches were strong enough to hold our weight. 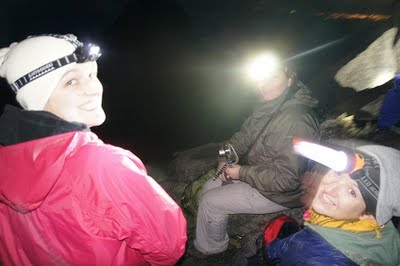 After about 20 minutes of this strange, synchronized walk through the dark, the pack began to break up as the fitter and younger people powered ahead and the older people slowed their pace. And there really were some oldies. There was a Japanese group who probably ranged from about 50 to 70. It took them slightly longer but they made it to the top with smiles on their faces.
I would have been quite happy to stay with this slow group but Halle (our mountain guide) marched us forwards through the darkness.
The air felt different up here, thinner and fresher. It was like the difference between drinking warm water and icy cold water. It does the same job but it isn’t just the temperature that is different. It tastes different and makes you feel different.
The massive bird had returned to my chest and was fighting its way out with fury. It was flapping so hard I could barely breathe and it wasn’t about to get any better. It was around about this point that I began to think, ‘What the hell am I doing? Its pitch black, I’m stumbling up a giant rock just so I can stumble back down again. I can barely breathe AND I’m actually paying for this!’
We were told that there was a rope at the top of the mountain and when we reached it we must never ever let go or we will die. I was almost looking forward to this reassuring safety rope that would guarantee my life, but when we got to it, it was so close to the ground that I would have had to crawl to hold on to it. I decided that I would risk it and walk on my feet.
We did come to one section where the rope was absolutely necessary. We were just coming into level 8 of the mountain climb where we stopped walking across the rocks and earth and came to sheer cliff face. We’d noticed the cliff face from further down the mountain but presumed there would be some kind of footpath that we couldn’t see, but oh no, we just used the rope to haul our weary bodies up the cliff. I found this quite difficult because I have absolutely no upper body strength and my feet kept slipping on the smooth rock face. Thankfully, due to the dark, I couldn’t see the 3,000m drop below me and the only thing separating me from certain death was about 1 meter of rock to my side and a rope that I was barely strong enough to hold onto.
I dug my toes into the cracks in the rocks as I shimmied along the edge of the cliff, pulling myself up the steeper parts or zig sagging across the parts that were flat enough to walk on without falling over.
We eventually came to the final check point where we rested for about 20 minutes in a hut. We were making good time so Halle insisted we waited in the warm hut rather than make it to the top long before sunrise where we would freeze while we waited.
We passed a lot of people on the way up and it was great to look down the mountain and see the line of head torches slowly making their way up through the darkness. They looked like giant stars below us but weren’t quite as amazing as the millions of stars above.
It was hard to get going again after our little rest and by this point I was full of Snickers which didn’t really help so I had to stop frequently to catch my breath.
There were a few head torches bobbing along in front of us and when they finally came to a stop high above our heads, I realised we were nearly there. 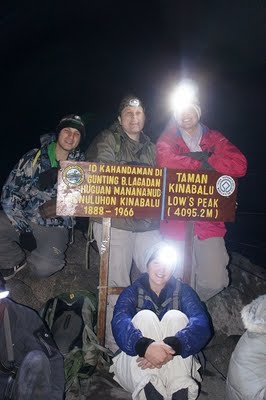 We bent our heads against the wind as we forced our feet to take the last few steps. And finally we made it and we joined the few worn out people who clumped on the rocks, over 4,000 meters high. 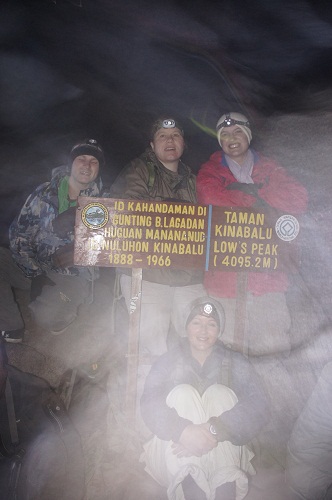 It was completely dark so we had an amazing view of the stars and the little trail of headlamps that were making their way towards us. 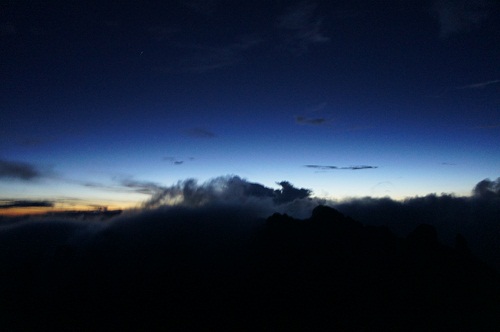 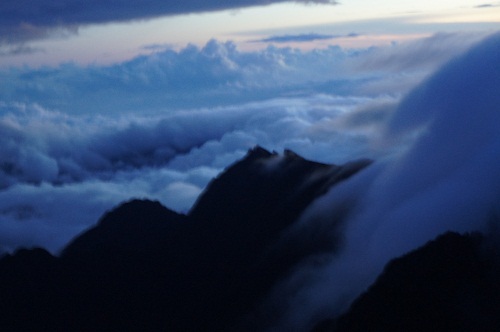 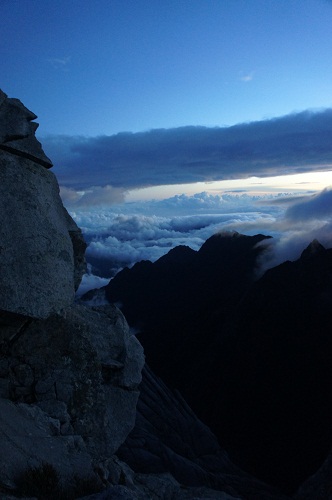 Within a few minutes, we could make out the clouds around us and soon we could see a little ray of light emerging from the earth below us. It began as a yellow fleck that soon developed into a bright light that turned the sky from black to dark blue and finally to that brilliantly bright blue that I couldn’t take my eyes off the night before. 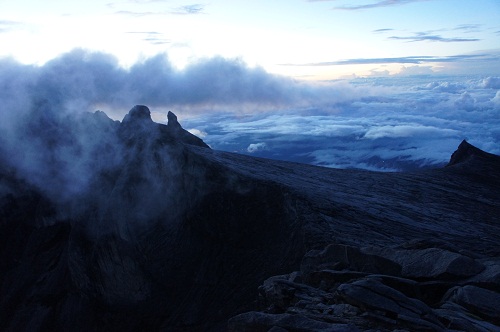 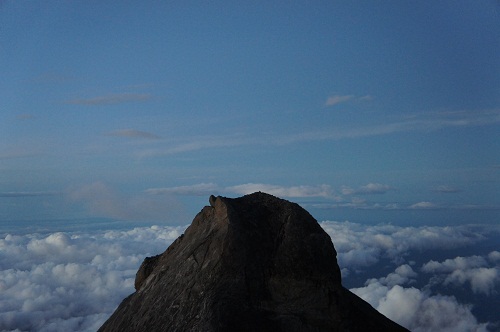 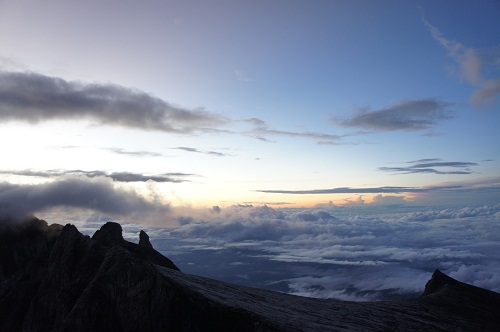 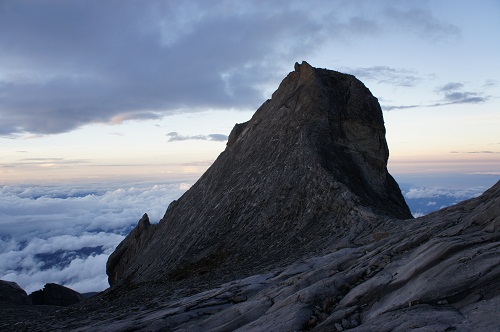 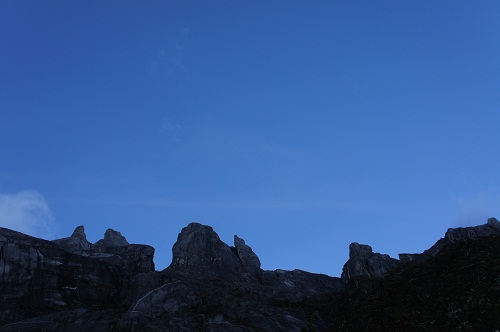 Halle was disappointed that it was cloudy, wanting to show off his mountain in all its cloudless glory. But I thought it was amazing to be stood at the peak of a mountain, way above the fluffy clouds below us that lay like a rug, ready for us to jump into. It reminded me of how high up we were and the clouds put the height into perspective and I couldn’t believe I’d done it on my own two feet. 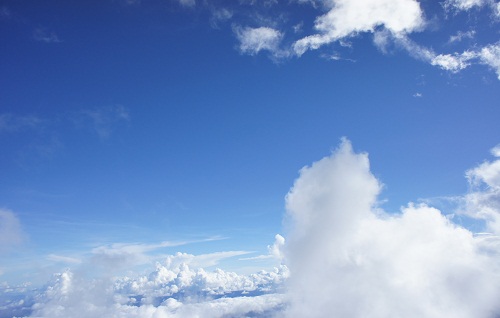 We couldn’t stay at the top for long because it was just too cold, so at 6.30am we began the long decent.
I scrambled down the first part on my bum and hands and then zig zagged across the smooth, steep rock face as walking straight down hurt my toes and knees. Sliding down the ropes was great fun but I tried to avoid the daunting view below that I could now see in daylight. 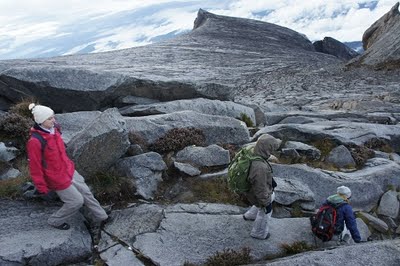 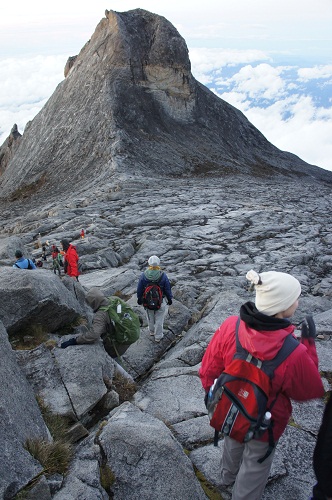 We stopped at Raban Batu hut for breakfast, picked up our bags and began the long walk back down.
We began as enthusiastically and excitedly as when we began our journey up the mountain the previous day, which now seemed like weeks ago. We were still high from what we’d achieved but looking forward to a long hot shower and a rest. 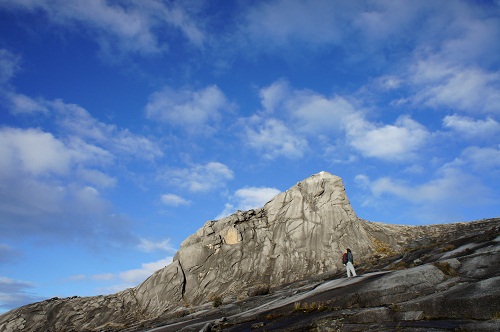 I was glad to one of the people climbing down, rather than the hot, sweaty people heaving themselves up. I smiled and nodded at them like a wise old lady and sympathetically gave encouragement. ‘Nearly there!’ I smiled, even though I knew they had a long, hard slog ahead of them.
What I hadn’t bargained for was the long hard slog ahead of us.
We were quickly making our way down the levels. Level 7, 6 and 5 were fine as we dreamed of the cold beers, warm showers and soft beds that waited for us. By level 4 my knees were aching but we were descending quickly and I still reassured people going in the opposite direction that it was worth it. 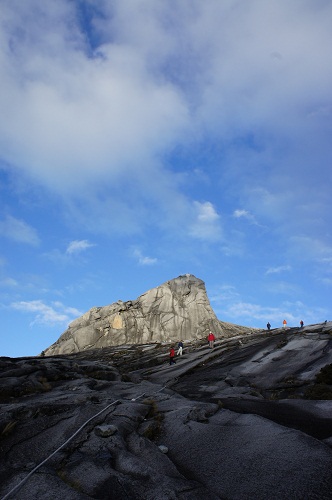 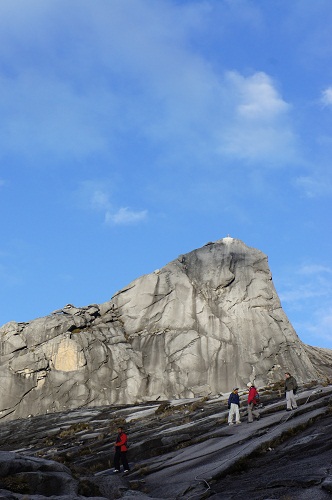 By level 3, we’d slowed to almost half the speed. The path was getting easier but our joints were aching like the elderly.
At level 2, I was having to take every step slowly and carefully. Stabbing pain shot through my knees and made me grimace and gasp with every single step.
Level 1 finally came but was the longest kilometre of all. I could barely move one leg in front of the other and was probably scaring the people who passed. 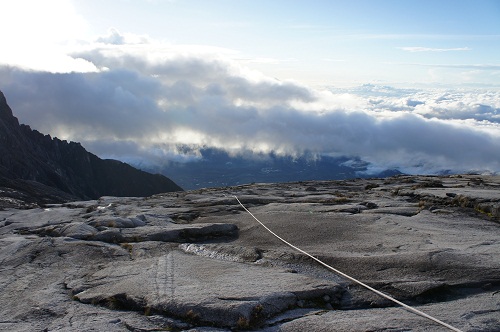 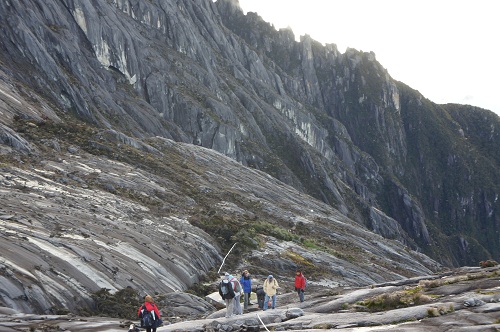 I never thought I’d say this but the 4,000 meter climb uphill was actually easier than the coming down. My heart and lungs had to work furiously on the way up, but I recovered quickly and it feels good to have a good old cardiovascular workout. It doesn’t feel so good to have a piercing pain through your joints that you know will stay with you for a fair few days. 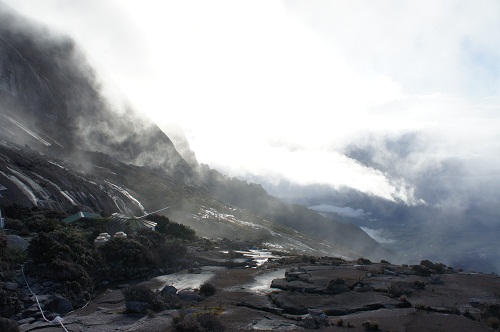 But a few hours later, and with a belly full of food and mug full of steaming tea at the foot of the mountain, I looked up and felt really pleased with myself. The aching knees were definitely worth it. 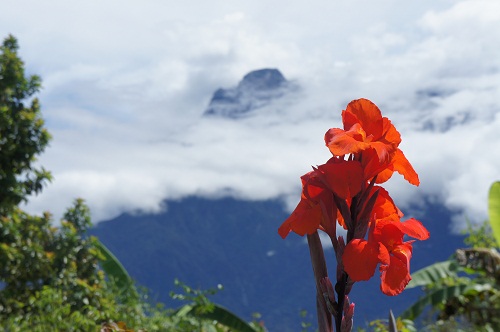 hi did you use DSLR? is it safe to use one in that cold weather?

Hi, I used a Sony NEX3 at the time, a mirrorless camera. And it was fine. I've used a different DSLR in colder temperatures and it's always fine. Sometimes the lenses fog up but they unfog after a few minutes.

[...] I was listening to, I don’t believe it! Stay tuned tomorrow for the second installment of Climbing Mt Kinabalu Day 2. Tomorrow is when we reach the peak at 6am and the beautiful photos as the sun rises below the [...]

>Amazing pics and what a great looking mountain! Worth the climb up I'm sure.