Wondercool is Copenhagen’s answer to beating the winter blues; It’s February and we’re all tired of the cold and dark days, no one wants to go out, tourism is low and restaurants and bars are quiet. What better time of the year to lift our spirits than with an art and culture festival?

Wondercool is a chance to experience the best of Copenhagen’s culinary events, music festivals, art, design and fashion. While I was in Copenhagen I saw a gastronomic theatre showing of the Snow Queen which was one of the highlights in the event calendar.

There are many foodie events during Wondercool organised by Copenhagen Cooking and each year there is a specific theme. In 2014 the theme is ‘Taste of Emotions’ and the Snow Queen absolutely nailed it.

Before I arrived I was expecting a regular theatre performance with a few breaks for fancy food. Even this sounds amazing but I should have known there was more to it. What we actually experienced was a million times more incredible and even recalling it now feels like a fantasy that I’m not even sure I have the imagination to dream of.

The Snow Queen was originally the creation of Danish poet H.C Andersen and this production was created by the artistic trio Mette Martinussen, Dorte Holbek and Martin Tulinius. I was lucky enough to sit next to Martin, the creative director, during our final course during the show and his creativity is inspiring.

“The unique thing about this project is that the Snow Queen is neither solely a theatre, art or restaurant experience,” said Martin. “We’re creating a show in which theatre, art and gastronomy amalgamate into an entirely new expression. The audience become travellers within this magical tale rather than passive spectators.”

Our group arrived in a reception area where we were greeted by three identical looking girls named Gerda and it soon became apparent that we WERE Gerda. Confused yet? You will be. 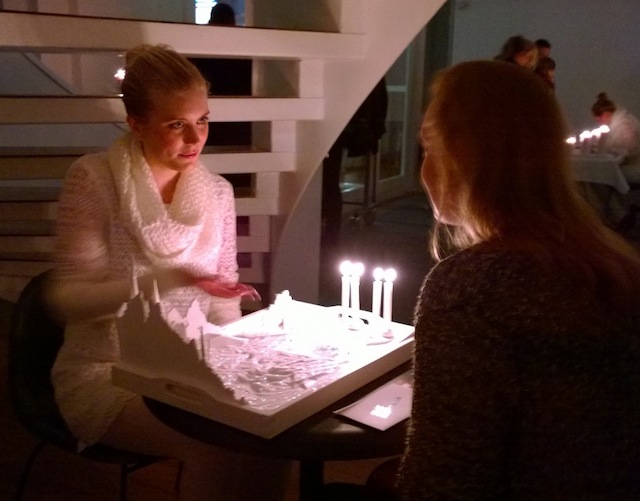 A lady is told her fortune and her journey is mapped out in the snow.

Sipping on ice cold camomile, apple and sake cocktails we entered a dream-like fantasy and a new world of good and evil.

Gerda’s good friend Kai has been stolen by the Ice Queen and we journey North in search of him. Along the way we are subjected to many trials and tribulations, riddles, seduction and magic. This fairy tale is far from childish.

For almost the entire journey, the hairs on my arms and the back of my neck were standing on ends. I had that feeling when you’re so engrossed in a film that you forget where or who you are and your whole world is about that moment. Everywhere I turned I was being watched by a magical creature who either entranced me or repulsed me or made me feel nervously on edge.

The journey begins in a Troll Mirror where the young Kai sings angelically in a never-ending mirror room of stars. The Snow Queen bursts through the mirrors in a flurry of snow. Kai’s heart is splintered and frozen as he becomes enslaved by the Snow Queen and stolen away to the cold north.

We’re whisked away in a bus (yes, a bus!) to visit the Flower Lady where we are given a flower of fate and devour our first course. 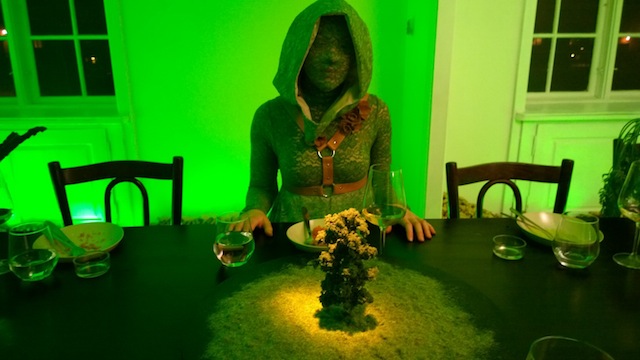 The flower lady is waiting for us…

Starter at the Flower Woman’s House

Tartare of minced carrot with tangy herbs, horseradish and sunflower

We meet a Lappish woman who seems to be having a terrifying fit and then two seductive Finnish Women tell us that winter will pass us by and everything we need can be found in our hearts. 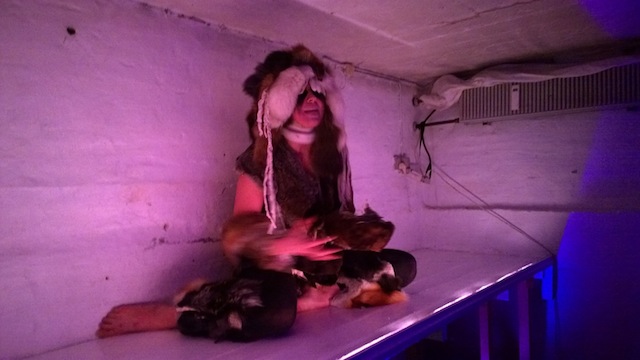 We’re given crispy cod skins and anchovy to snack on until we reach the next stage of the adventure.

Our individual ‘flowers of fate’ lead us to the next part of our journey and I’m led to a small pink room where this lady reads me a Danish fairytale. 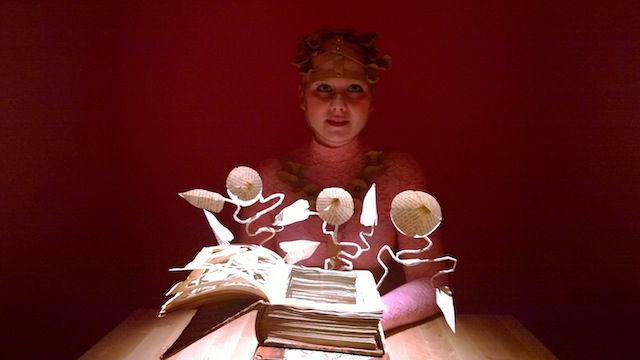 A Danish fairytale in the Pink Room

I eat cod roe, cauliflower and dried egg yolk and she tells me to follow my heart.

We pass a terrifying crow and an uncomfortable room that appears to shrink you and raise you to the clouds before reaching a bed where a man is writhing beneath the duvet. This is a palace of dreams filled with nightmares and we sip white wine in transfixed horror.

We’re then trapped in a hideout with a band of thieves who make a terrifying display of capturing us. Thankfully, the feed us pretty well so all is good.

With the thieves we eat:

Filo sack with marinated leg of hare and dried fruit 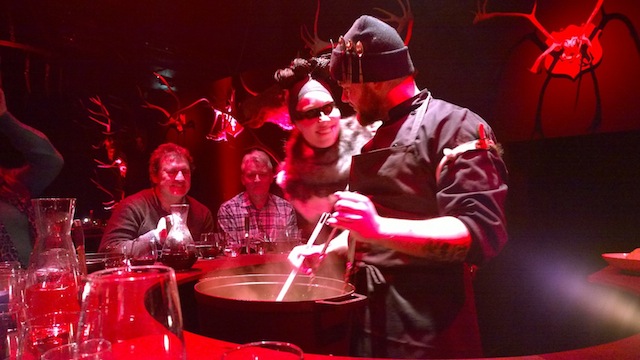 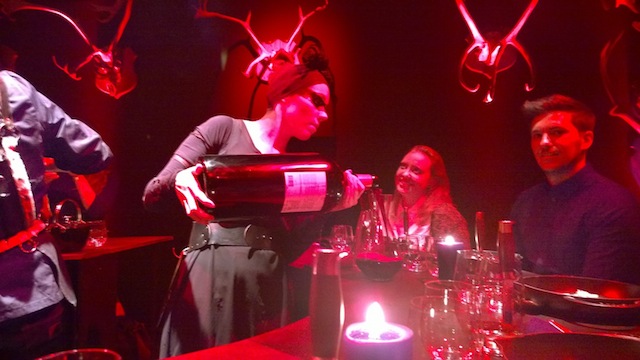 Our captives snarl and hiss down our necks as we eat our meal in fear. They finally fall asleep and we escape to the throne of the Snow Queen where we find Kai almost frozen to death. We witness an elaborate dance where good overcomes evil and our warmth begins to melt the Snow Queen and her palace. During this magical dance, Kai is returned to us and we enjoy a sweet, snowy desert to celebrate. 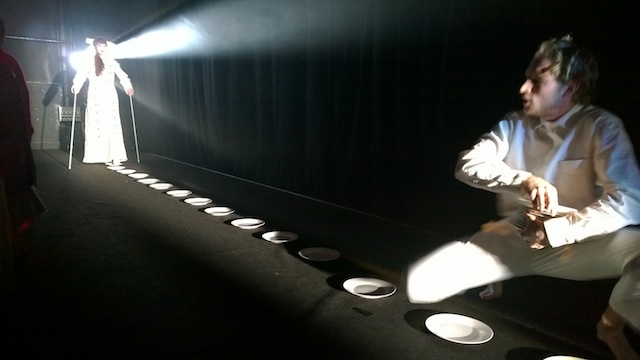 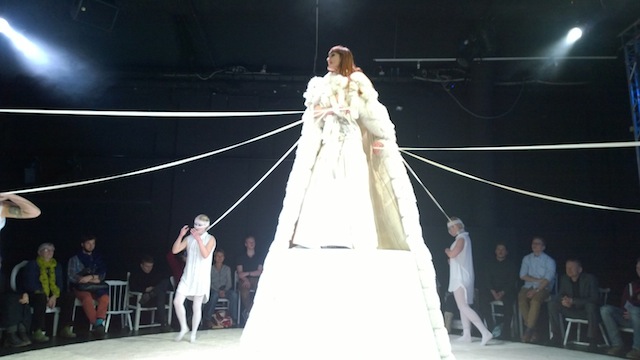 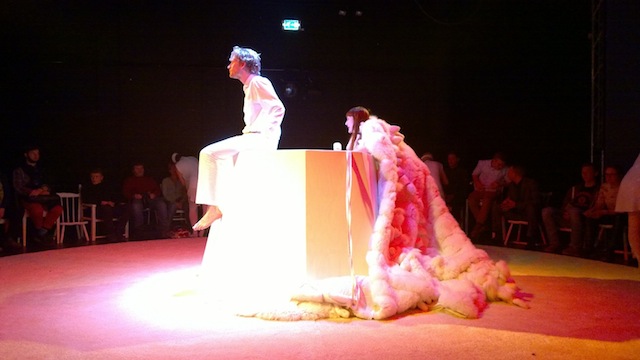 I still can’t quite put into words how amazing this experience was. Imagine being inside your favourite magical film and feeling as though you’re part of the story. Then add some of the most incredible food you’ve ever tried. Add a mixture of fear and excitement and anticipation and awe (and five classes of wine) and you might just be able to image how good this was.

All I will say is that if you ever have the chance to witness a gastronomic theatre event, grab it with both hands and enjoy the ride because this was one of the most incredible things I’ve ever seen.

Massive thanks to Visit Denmark and Wondercool for inviting me along to this event. I was a guest of Visit Denmark but all thoughts and opinions are my own.

Blog Reads, a cool job and my next trip to Slovenia | The Travel Hack

[…] a huge fan of dinner parties with a difference (such as this gastrotheatre show in Copenhagen) and Messyness Chic has found the ultimate dinner party. This restaurant without walls is a […]

[…] unique the events were. Copenhagen is such a beautiful city and the Danes made me feel so welcome. The Snow Queen was a highlight of my trip but I’m still finding it difficult to put it into words how amazing it […]

An Instagram photo journey through Copenhagen | The Travel Hack

[…] The Snow Queen. This was the highlight of the festival for me! […]

This sounds so weird and phenomenal! Reading all your posts is getting me very excited for Denmark in April. I am especially excited about the food because the New Nordic cuisine sounds so intriguing, and it sounds like you got to try a lot of it at this dinner. I'm also reading Hans Christian Andersen's memoir and stories to get me in the mood, and to remember what they're really about since they are darker than their Disney counterparts.

Hi Monica, what an exciting experience! I appreciated how much detail you shared, it gave me a good understandstanding of the event. Your pictures were fantastic as well. At times it reminded me of going through a haunted house and I don't care for that feeling at all but you've intrigued me so I just might have to check this out.