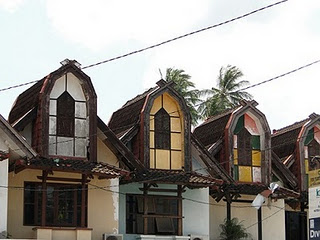 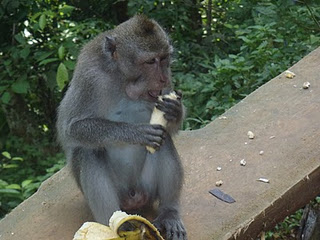 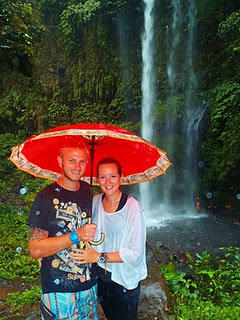 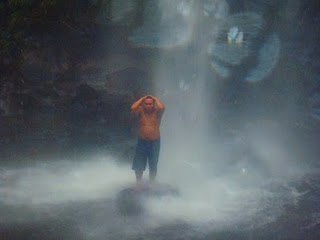 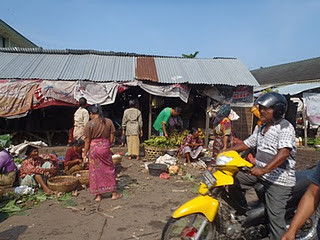 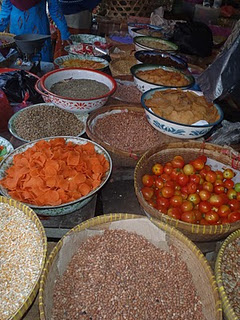 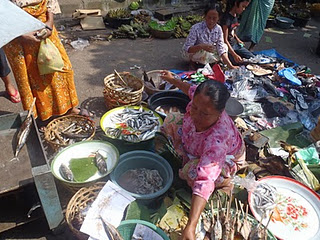 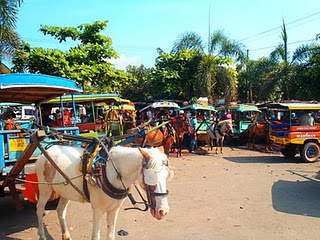 We took a slow boat from Gili Trewangen to Senggigi which took 4 hours to cover a distance that I’m pretty sure I could have swum. We first went to Bagsal on a worryingly overcrowded boat and then waited there for a very confused hour until we finally got on a little mini bus to Senggigi.

Apparently, Senggigi was quite a popular tourist destination until the Bali Bombings happened. This is a shame because it is obvious that it was once very pretty but now looks a bit run down with a lot of empty guest houses and restaurants that have closed. There were a lot of pushy touts around but it was just a random guy on a street corner who pointed us towards the cheapest guest house in town, Sekiki. It was cheap and nasty but we wanted cheap so didn’t really mind. The room was clean and there was a nice outside area.

We used the ‘random man on the street corner’ to help us book a lot of things while we were in Senggigi because we trusted him from that first recommendation and because he wasn’t instantly looking for some money from us. We booked a day trip through him to some waterfalls in the north of Lombok for the next day.

We were picked up at 9am by a lovely guy in a flashy new 4×4 and our first stop was some local markets. It was cool to see a proper, local market and it was absolutely huge. Some people gave us strange looks, probably mystified as to why we would want to go to their market, but most people ignored us and carried on with their business. There were horses and carts outside filled with fruit and veg next to a massive pile of rubbish that was festering with flies in the hot sun. There was an old, decrepit building and inside there were rows and rows of higgledy piggledy stalls selling everything from underwear and rollers, clothes, live chickens and flapping fish. Some of the fish looked fresh and delicious but some of it was rotting and covered with flies. There were stalls with bowls and bowls of dried herbs and spices, pickles things and persevered things and colourful things and hairy things and things that we couldn’t have named if our lives depended on it.

No one spoke a word of English which was nice because it was one of the only markets I’ve been to where I wasn’t pestered to look at their stalls and buy their products, even when we stopped to take photos. It was crazy hot inside the market and the spicy smells mixed with rotting fish made me feel a bit faint but we managed to squeeze our way out to an outside area of the market where ladies squatted over burning coals, cooking chicken and fish. We attempted to buy peanuts a few times but most people just smiled and laugh and shook their head. We finally got some through lots of pointing and smiling and nodding.

On our way out, we took some photos of a truck that was so overfull with people that it was almost comical and we noticed that the people on the truck were looking back and taking photos of us which i thought was quite funny and ironic.

We were buying peanuts in the market because our next stop was Monkey Forest. We actually just stopped in a lay-by at the edge of the forest where about 20 greedy monkeys were being fed by tourists. We were a bit nervous at first but soon learnt that if we knelt down with a palm full of nuts, the monkeys would sit next to us and take the nuts from our palms. Most of the monkeys were gentle and calm but the more nervous ones would scratch and snatch and show their teeth so I often ended up just dropping my peanuts and running away.

As Sam bent down to off his peanuts to a monkey, the monkey simply squatted down beside Sam and put his little hand into Sam’s. He didn’t want the nuts but he obviously didn’t want anyone else getting them and he just sat there for a few minutes holding Sam’s hand. It was so cute. The alpha male of the group was really aggressive and would suddenly jump up and scare the monkeys into the trees.

We then had a 2 hour drive up north to the waterfalls but the little villages we passed through and the beautiful mountains that lined the rice paddies made sure the trip went quickly and kept us entertained. And so did our driver who told us his life story when we asked how long he’d been a guide for. It turned out he’d only been working a few weeks because he’d been in rehab with a serious heroin addiction. How do you respond to that!? We decided it would be best to sit their quietly and listen to his story.

It had been gorgeous and sunny all morning but started pouring with rain when we arrived at the waterfall. We hired a guide who led us down a steep muddy track and when the heavens fully opened when we reached the bottom. Within 30 seconds we couldn’t have possibly been any wetter.

The waterfall was amazing. It was probably the biggest I’ve ever seen and some Balinese tourists were splashing around at the bottom. It was beautiful to stand at the bottom of this huge waterfall and in the middle of the rainforest, surrounded by massive cliffs and lush, tropical plants and trees, but we were eager to get out of the pounding rain and made the long walk back up the hills to a nice warm restaurant at the top.

On the way back to Senggigi, we stopped at some scenic spots to take some photos, including one place where we had a view over all three Gili Islands which felt really weird after spending a week on the Gilis, staring up at Lombok and now we were doing the opposite.