We all know the Amalfi Coast is one of the most gorgeously scenic areas in the world. I’m sure I’m not the only one who has been inspired to visit the Amalfi Coast after drooling over gorgeous Instagram photos showing colourful hillsides dotted with beautiful little buildings and dazzling blue seas below.

If you like to get snappy happy on your holidays then keep reading to find the most Instagrammable spots on the Amalfi Coast to fill your feed with jealousy-inducing photos! 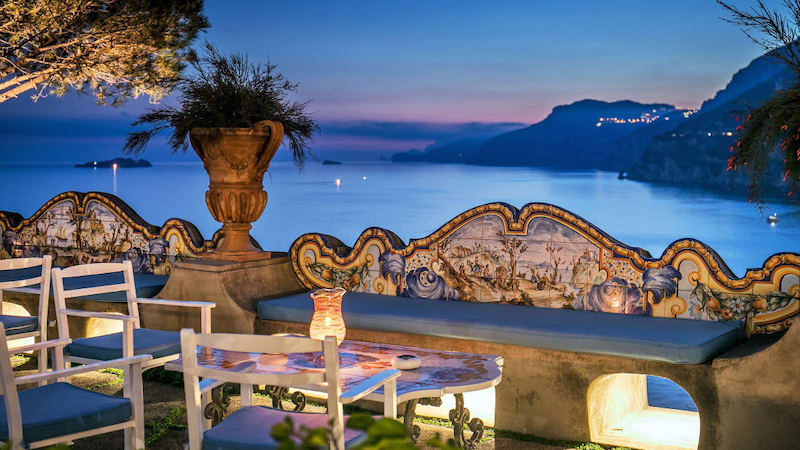 The chances are, that if you have a guide book for the Amalfi Coast, it is sherbet-hued Positano which graces its cover. Buildings in varying shades of rose, dusky pink, peach and rusty terracotta seemingly tumble down the vertiginous cliff face.

On the eastern edge of Positano’s citrus covered cliffs, sits Il San Pietro di Positano: one of the Amalfi Coast’s most luxurious hotels.

Its elaborate terrace, trimmed with ornate majolica benches, was modelled on Naples’ Santa Chiara convent. But if it looks familiar, it is probably because it is one of Italy’s most photographed terraces. Get there for sunset – they make the coast’s best Bellini. 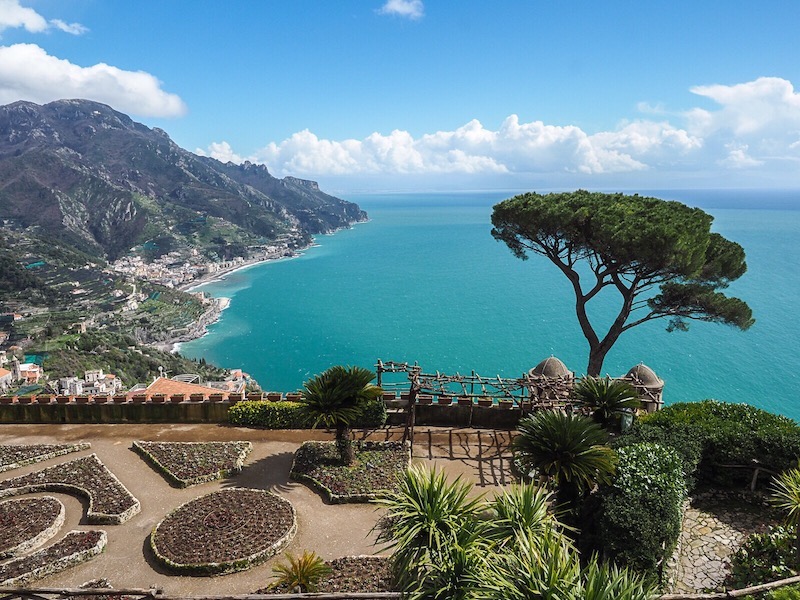 Made famous by German composer, Wagner, Villa Rufolo’s glorious gardens offer commanding views of the Amalfi Coast and Tyrrhenian Sea. Set above the hustle and bustle of Amalfi town, Ravello has an inherent sophistication. Referred to as the City of Music, Ravello hosts open-air classical concerts throughout summer.

If you don’t want to head outside Sorrento’s centre to hunt out the farms themselves, then just wander in to the old town. Meandering around the souk-like lanes is a zesty affair. Here, you will find pottery hand-painted with the tangy fruits, linens embroidered with them, eye-wateringly bitter sweets and limoncello galore. However, reserve your snaps and hashtags for the fruits themselves. For, down every street you will also find lemons the size of melons. Well, when life gives you lemons… Instagram them! 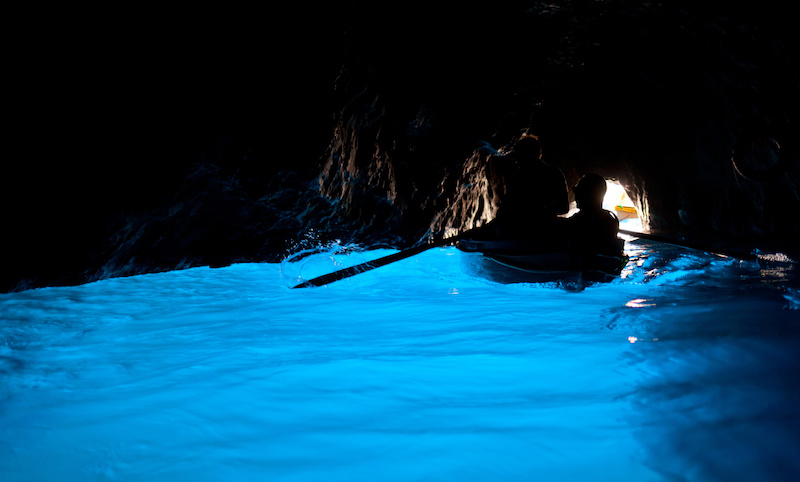 This is Capri’s money shot. The cave, which you can enter on foot or by rowing boat, glows a magical blue in strong sunlight, thanks to an underwater aperture. Pick a sunny day with calm seas and plan to arrive just after noon, when the sun is at its strongest. Do not attempt this trip in July or August, as you only spend 5-10 minutes in the cave itself but in high season the queues outside can take up to an hour. Alternatively, Grotta dello Smeraldo (Emerald Grotto), is just west of Amalfi and includes an eerie underwater nativity scene made from Vietri ceramics.

Mount Vesuvius at Sunset from the Grand Hotel Excelsior Vittoria 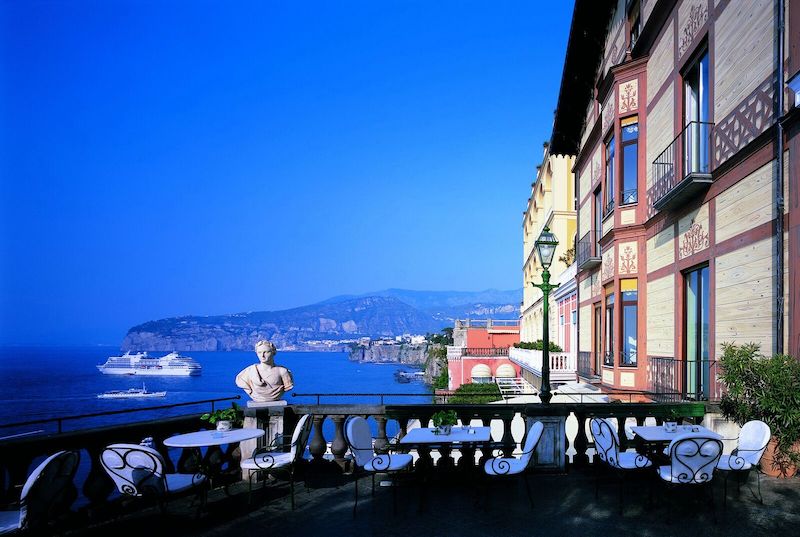 Okay, so Sorrento isn’t ‘technically’ the Amalfi Coast. However, it is considered the gateway to the Amalfi Coast, and that is good enough for me – especially as it is the most convenient base from which to start resort hopping and it’s an excellent spot for an Instagram shot!

My favourite hotel in Sorrento is the Grand Hotel Excelsior Vittoria. You will probably recognise it, perched high above Marina Piccola it is the most photographed hotel in Sorrento. Its position affords it commanding views across the Bay of Naples to Mount Vesuvius. The money shot here is from their vast terrace, dotted with proud classical busts. During my last visit they were polished and cleaned each morning by a lady wielding a miniscule brush with the concentration and precision of a brain surgeon. Arrive before sunset, get a table towards the front of the upper tier, order a champers and get that shameless selfie. Then sit back and watch the sun do the rest. 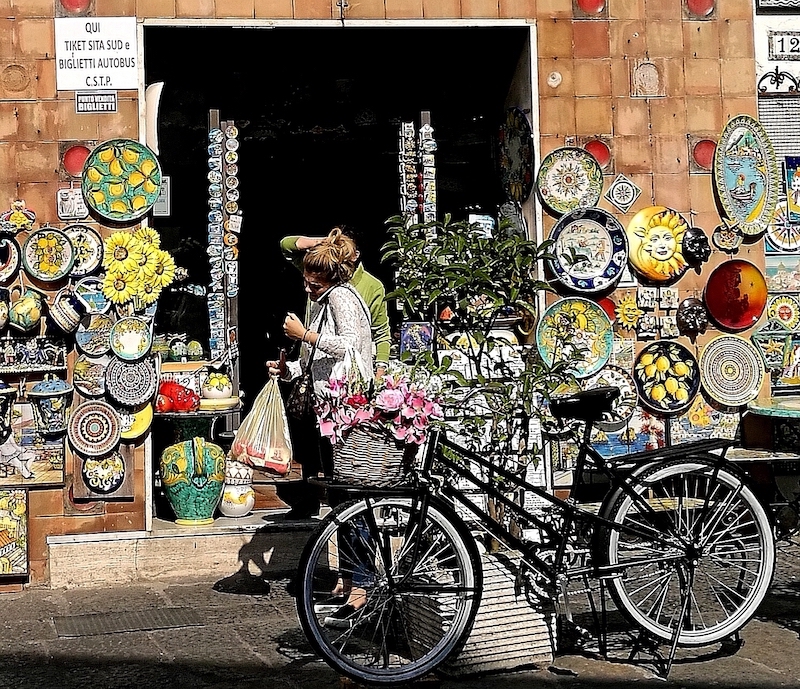 If Sorrento is the gateway into the Amalfi Coast, then this tourist-free town is the gate out. Vietri sul Mare is famed for its production of the brightly coloured local ceramic, majolica. On day one of your stay on the Amalfi Coast you will have spotted this vibrant earthenware at every glance. It proudly resides everywhere from restaurant signs and church domes to flashy hotel bathrooms. Photograph as many different patterns and colours as you can find and pop them in a collage: job done. 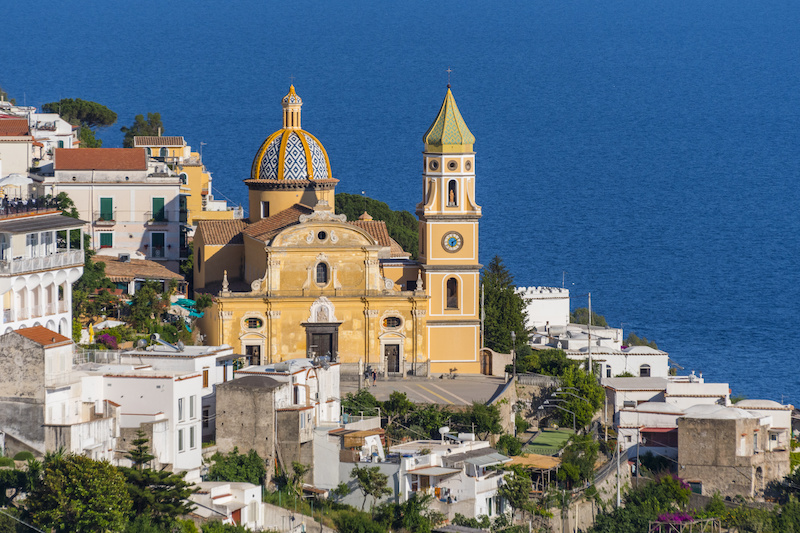 The sleepy fishing village of Praiano, near Positano, is home to one of the region’s most photographed churches. The Church of San Gennaro bears a striking dome, decorated in bright blue and yellow Vietri tiles. Santa Maria Assunta church in Positano also has an ornately tiled dome.

Get a siren’s view from a speedboat in Positano 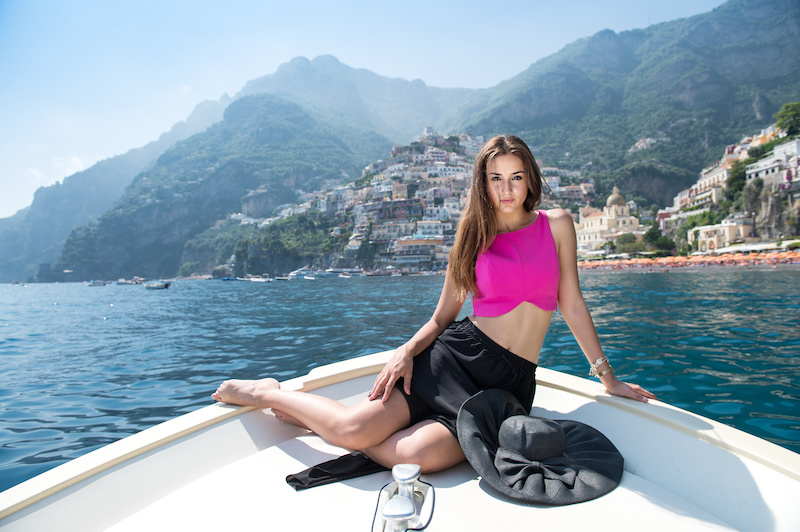 ^Sorry about the awful posed pic, it’s all I could find!

You cannot beat a shot of your speedboat’s bow approaching the Amalfi Coast’s iconic pastel-painted houses, stacked from the shore to the cliff top. Positano is a good shout for this shot. Go all out and pop your tanned legs in to really wind your followers up. No filters needed. 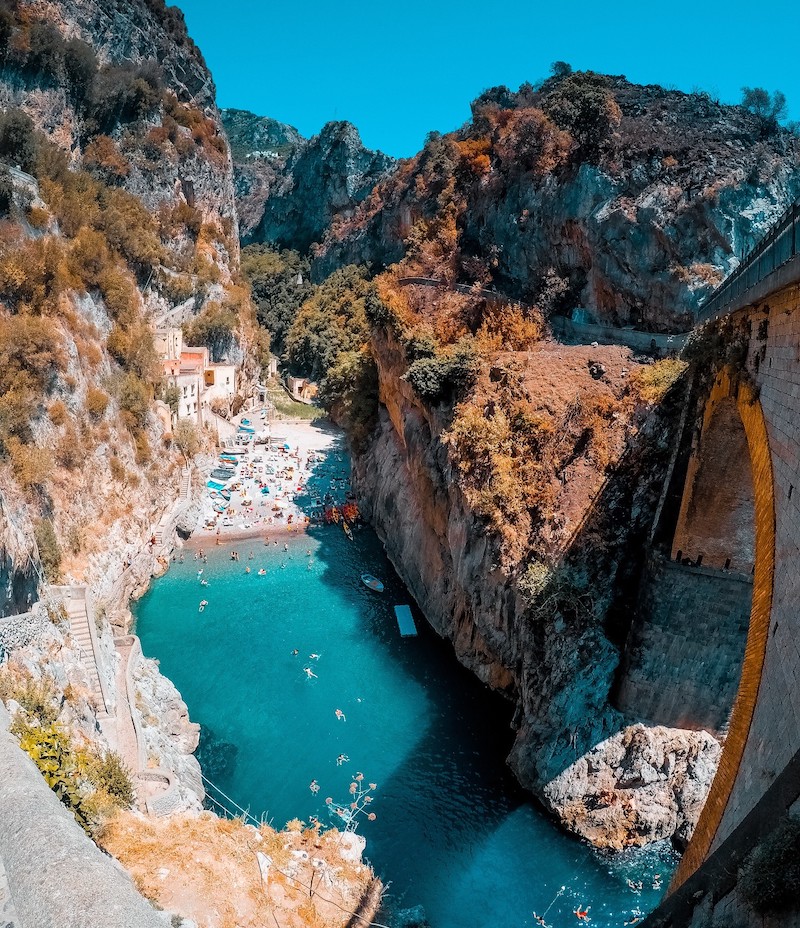 Once a hiding place for bandits, this deep gash in the rocks, just west of Amalfi, is rumoured to be Italy’s only fjord (although in reality, it was created by river erosion, not a glacier). Today, you can descend a lengthy stone staircase to reach the village’s beach. Located 300m beneath the main town, which locals refer to as Neverland, this scenic spot provides a cool summer bathing spot. Get a shot of Furore bridge – each July the 90ft high bridge hosts a tense high dive competition. 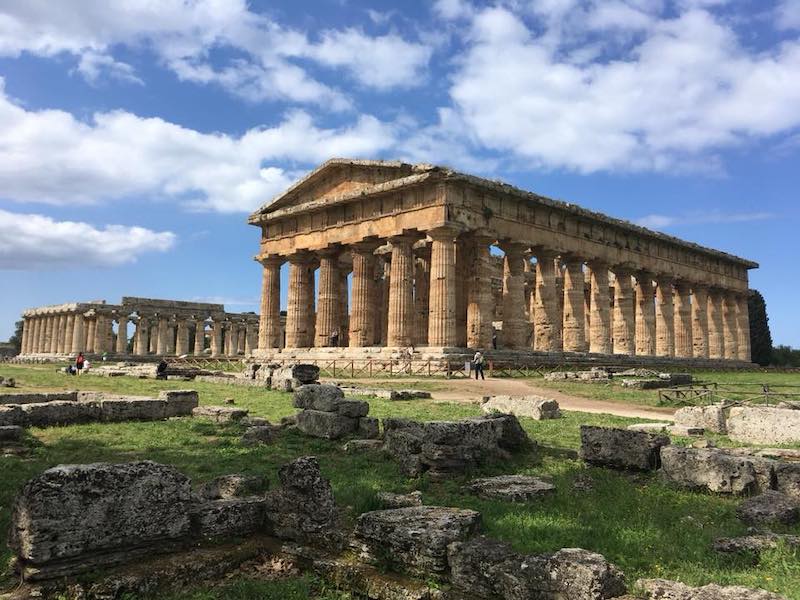 An hour from Salerno, in the neighbouring Campanian region of Cilento, three of the world’s best-preserved ancient Greek temples hide within buttercup-strewn meadows. Originally named Poseidonia, the UNESCO-World Heritage Site dates back to 6th-century BC. Eventually taken over by the Romans, the city was abandoned following a deadly malaria outbreak and various raids. Despite their historic importance, they were lost to overgrown forests and only rediscovered during the 18th-century. Tucked away from the hectic Amalfi Coast, this site is surprisingly free of tourists, so you can take as long as you like to get the perfect empty shot.

There you have it, some of the most gorgeously photogenic spots along the Amalfi Coast.

This was a guest post written by Jessica Baldwin.

You can you read her other post about the best Michelin-star restaurants on the Amalfi Coast here.

It really is a spectacular place. I've just published a blog post on the areas I visited last year. So much history in the area not to mention the sensational beaches, food and sunsets.