What is Secret Cinema?

This was the first question I was aksed whenever I excitedly recounted my night at one of London’s best kept secrets. And with so many social savvy Londoners, it really is hard to keep a secret in this city.

“Well…” I begin awkwardly, wondering where the hell to start. “It’s…well…it’s a secret.”

NOTE: If you plan to visit Secret Cinema any time soon, please don’t read on. As a blogger, it’s ridiculously difficult for me to tell you not to read my blog post. I’ve been programmed to do everything I can to encourage you to read my blog for the past two years and now I’m doing the opposite but please don’t ruin it for yourself. Bookmark this page and come back to it. (Sorry, I couldn’t resist.)

So why am I writing about something and encouraging people not to read it? Well, I’m just really bad at keeping secrets, sorry.

Each Secret Cinema is different and will vary depending on the film you watch. You won’t know what the film is beforehand but it’s likely to be a cult classic. During the ‘show’ you become part of the film and your world becomes a mixed up mess where you can’t differentiate between fiction and reality. You know it’s going to happen but it’s still disorientating and confusing all the same. All this confusion may sound like a bad this but it was honestly the best night I’ve ever had in London. 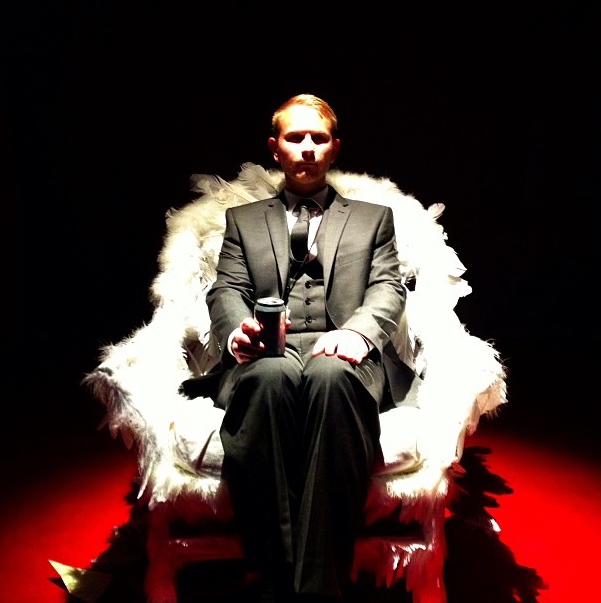 The evening actually began two weeks prior to the event when I booked the tickets. I was send an unusual email from GOOD who turned out to be my ’employer’. Unfortunately, the company wasn’t doing so well and was going through a re-structure. I had to log onto the intranet and fill out a series of questions to establish whether or not I could keep my job.

I was immediately sucked into my new role and answered the questions as though my future career genuinely depended on it. I was actually really disappointed when I received an email telling me I’d been made redundant. I was given an address for a place in Croydon where I’d be put into sheltered accommodation and assigned to someone who would help me find a job. I was advised to wear old clothes because I was a pauper after all.

My boyfriend was awarded with a managerial position and very smugly rocked up at the allocated destination wearing a three-piece suit while I wore ripped jeans, Converse and an old t-shirt. We already knew it was going to be a strange night.

Now this is the part where explaining my evening gets weird. Brace yourself.

The next four hours flew by in a muddled haze. The entire night was spent in a 13-story abandoned office block. It was ring-shaped with a hollow core so each floor was circular.

I began in the basement while a team of people in yellow suits cleared up a toxic spill before a man in a suit pushed me into a lift while muttering that I really shouldn’t have seen that. I appear on a floor that feels more like a squat with small rooms that smell like damp due to the rotting walls and dirty mattresses and blankets on the floor. I squeal as a cockroach as big as my foot scurries past and a mad man crawls behind. A woman grabs my palm to read my fortune while a chicken shrieks in the next room.

A woman that looks suspiciously like Dolores Umbridge from Harry Potter comes to my rescue and reassures me she’ll find me a place to live and a job. I thank her profusely and instantly love her for trying to help.

I’m encouraged to complete a series of tasks which will help me find a job. There’s some cockroach racing, flash dancing, a 3-legged race and a team race where I can’t touch the floor. I make some instant friends as a tall guy heaves me onto his shoulders and runs 100 metres with me clinging to his hair. I attend a party with the strangest people I’ve ever met. A woman wearing a wedding dress runs past in bear feet while screaming hysterically. No one bats an eyelid. I drink some spiked tea and the evening gets weirder.

I find my boyfriend who has some equally strange stories to tell and we begin to explore the different floors. We enter a dream area where you write down your dream and it’s re-enacted by silent actors. I regularly dream that I’m drowning and I choke up in panic when I see the actors performing something that I feel every night.

The film begins at 8pm and is shown on old-fashioned TVs that are stacked up all over the place but we’re distracted by the smell of food. A small room filled entirely with microwaves is crowded with strange characters while a man frantically heats up Thai food. Microwaves all around us ‘ping’ and someone rushes forward to claim their food.

We buy wine from vending machines that talk to you and then explore some more. 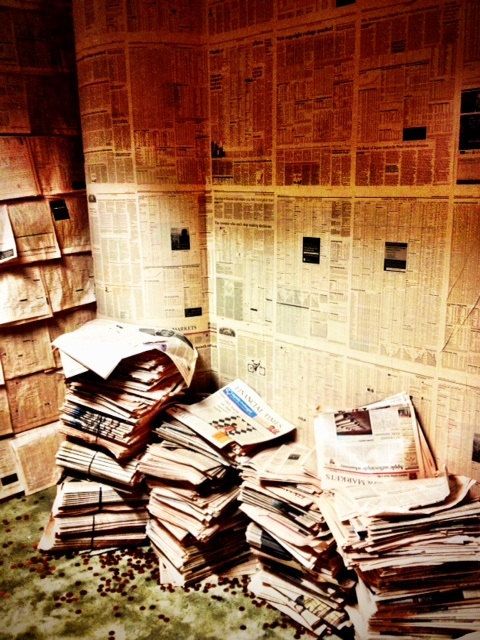 We stumble upon a deserted floor, completely pitch black except for a lamp in the corner. As my eyes adjust I see the room is filed with newspapers from floor to ceiling. A man appears in hysterics, clutching newspapers and telling us to grab as many as we can. We gather the paper into our arms and hurriedly follow the man to a small door like a dog flap. We’re pushed through and climb out through a washing machine door into a sophisticated party. No one bats an eyelid.

I clutch my papers as we make our way to the bar and order a drink in stunned silence. 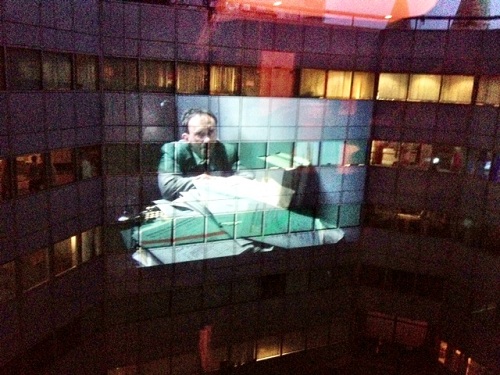 We decide to watch the film that is projected onto an outside wall of the building. Staring through the window on the 12th floor, a man suddenly appears on the outside and smiles sadistically through the glass. He’s gone as quickly as he appeared and I see the building is swarming with men on abseils.

I feel warm breath on my neck and spin around to see a man wearing a baby face mask staring straight into my eyes. I scream like a girl as he slowly spins on his heel and limps away.

A flash dance takes place in the courtyard outside and everyone gathers around the windows to watch the show. 100 people dance in union, there’s smoke and drama and chanting as someone rises on a platform through the smoke.

A woman who looks like Dolores Umbridge appears at my side and asks if I’ve managed to find a job yet.

“I…errrr…not yet.” I genuinely feel ashamed of myself as she looks at my wine glass and tuts.

The show ends at around 11pm and we stumble out into the humid night air in confusion.

“Did that really just happen?”

I went to Secret Cinema (for free - bonus!) a few years back and loved it. The only thing I really regret is that I hadn't had time to sort out my costume. It was a forties theme and some people really went to town with their costmes. Definitely something I'd do again!

Yea, I saw a few people who hadn't dressed up and I could tell they wished they had. Everything is more fun in fancy dress!

Oh, oh this sounds like a very cool adventure. I thought at first it'd be like an underground movie theatre but it sounds like it's a lot more than that. I'd definitely give this a try (probably not alone though(.

This looks incredible, looking at tickets for the next one already - it's actually pretty reasonably priced!

I went to this in February and loved it. We joined a secret underground movement and learnt to run around on our tip toes and stay hidden! I love secret cinema - I think it turns you into a giddy child again!

This is so cool, why didn't I know about this when I lived in London! ? X

It's because it's a secret! Ha, I only found out about it recently too.