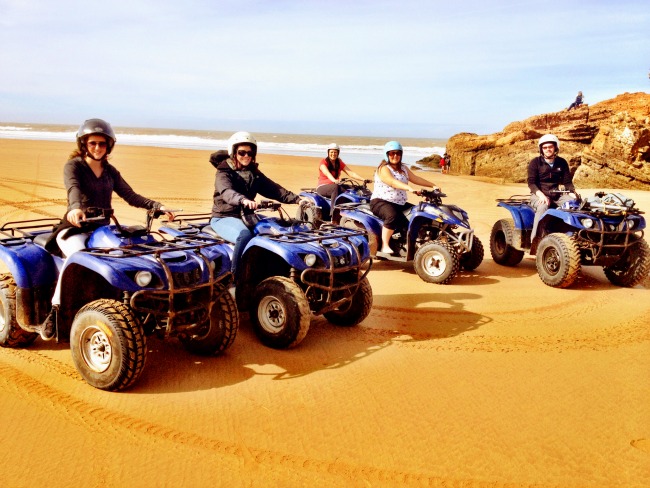 It was a Saturday morning in Essaouira in southern Morocco and the narrow streets were filled with tourists browsing and haggling for the perfect souvenir. Pushy shopkeepers were pulling me from stall to stall, showing off their ‘finest produce’ and promising the best price in the whole of Morocco.

But it wasn’t souvenirs I was looking for today, it was an unforgettable Moroccan experience that would take me away from the hustle and bustle and to the sand dunes and the sea.

We bumped into a man in the street who lured us into the back of his car with the promise of quad bikes, sand dunes and speeding along the beach. It wasn’t until the doors were shut and we were sat on each other’s laps that we realized this must be how kidnapping stories begin. But, like a lot of things in Morocco, you just have to trust your instincts. Things might not be done ‘the proper way’ but the Moroccan way is much more fun.

We arrived at a garage where I was given a small quad bike. With smiling faces I was told it was a ‘ladies bike’ but it was quite clearly designed for a child. I set off slowly with my knees bent up to my shoulders and headed towards the sea.

Needless to say, my child’s sized bike broke down fairly quickly under the weight of a traveller who had spent the past seven days eating her way around Morocco. I was quickly upgraded to a ‘man-sized quad’ and that’s when the fun really began. 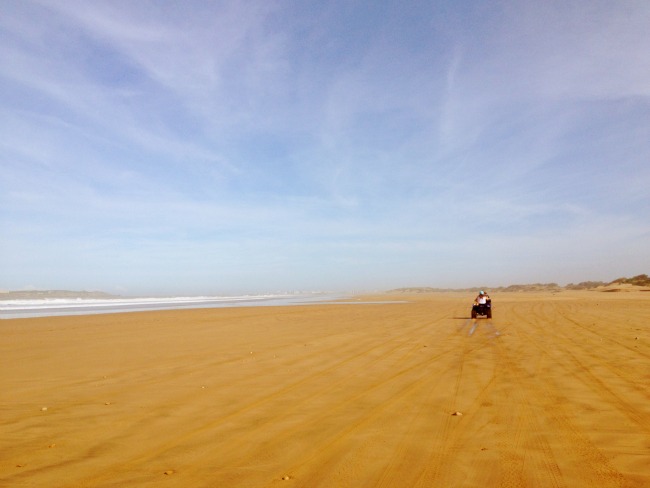 I’ve never been a good driver, quite simply because I go too fast. I failed my first two driving tests for speeding (I know, I know. Who the hell speeds on a driving test!?) so I was absolutely overjoyed when we arrived at the beach and were told to go as fast as we could along the smooth straight shore. Feeling the cool sea air whip across your face as it sends your hair into a crazy frenzy behind you has to be one of the best feelings ever.

It was like a giant playground for anyone who loves speed and I swerved towards into the shore to skim across the sea as the gentle waves crept up the sand and the sea spray kicked up behind me.

After we’d warmed out bikes up we left the safety of the wet sand and headed up into the sand dunes. Our fearless guide led the way as he sped up dunes that felt like they were a vertical climb. He’d then shoot off the top of the sandy peak like a man with a death wish as all four wheels left the sand and he disappeared over the other side. 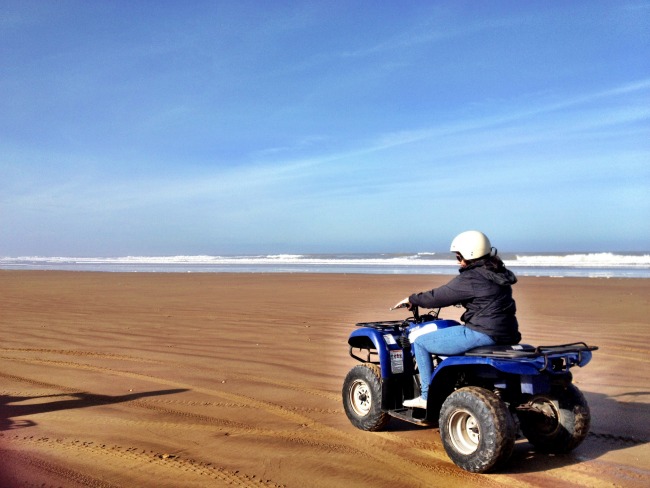 I followed his tracks in the sand, albeit slightly slower and with much more screaming and swearing, but soon found myself sinking and sliding in the soft sand. Revving the engine was futile so I let myself slip to the bottom where I realized that if I was going to do this, it had to be fast.

I set my eyes on the top of the dune and twisted the accelerator as far as it would go. My bike effortlessly climbed to the top where we flew through the air, momentarily leaving the safety of the sand, and landing softly before flying down the other side. After that, my throttle was turned back as far as it would go as I sped up and down the dunes and back to the shore.

After the two hour ride I’d renewed by love for speed and headed back into beautiful Essaouira with a spring in my step and the energy to face to shop keepers and haggle for all those presents I’d had my eye on.

Camping in the Sahara Desert - The Travel Hack

Things to Do and See in Marrakech - Taylor Hearts Travel

[…] Biking It was reading The Travel Hack’s experience of quad biking in Marrakech that first put the idea into my head. Upon Googling it seems that there […]

Things to Do and See in Marrakech | Taylor Hearts Travel

[…] Biking It was reading The Travel Hack’s experience of quad biking in Marrakech that first put the idea into my head. Upon Googling it seems that there […]

Love that you just hoped into the back of a Moroccan man's van! Great storytelling, looks like you had a lot of fun :)

I need some advice and I love you Morocco instrgram photos! My self my boyfriend have a 7 day trip in Marrakech the last week of june. I want to do as much of possible as I love photography and want to get some great shots. My plan was the 3 day 2 night desert trip (as people don't recommend the 1 night trip) but i also want to spend a day and night in Essaoria and do a day trip in the High Atlas. My other half thinks this is too much. Did you do a desert trip? Do you think one night would be worth it to do a bit of camel riding and see the stars? What was your itinerary?

Hi Nads, sounds like you're going to have a great time in Morocco! I think one night in the desert is enough. It was so much fun and is still one of my favourite experiences ever but one night is enough. It's very basic, quite cold and you can't help but be covered in sand for the entire time you're there. Make sure you have at least one full day in Essaoria because it's beautiful. If you can spend a night in the High Atlas Mountains I would recommend that because it's incredible up there. Here's a little bit more about my trip: http://www.gapyear.com/features/188438/monicas-going-to-morocco I have my full itinerary saved somewhere at work so I'll dig it out tomorrow and let you know!

Oops sorry about the grammatical errors there :/