As a frequent flier I spend A LOT of time in airports. I’ve been pretty lucky and haven’t had too many flights cancelled but I have had a lot of delayed flights.

I used to find it really frustrating but I’ve learnt to chill out whenever my flight is delayed. There’s no point in getting angry about it because there’s not a lot you can do.

Here are my tips for when your flight is delayed

Be super nice to the staff

I know you’re angry and sometimes you can’t help but take it out on someone else and, unfortunately, the airport staff usually get the brunt of it.

In most cases the delay will have absolutely nothing to do with them and they have a tough job keeping everyone calm. But the airport staff are actually the only people who can help you so being nice to them really pays off.

My flight home from Berlin on Sunday was delayed which meant I would have missed a connecting flight. A lady took me to one side and very timidly apologized and said they’d have to put me on another flight. It was already 7pm so I was sure I’d be put on a flight the following day and would have to stay an extra night. But when she said it meant me landing 90 minutes later than scheduled I was over the moon. I couldn’t stop thanking her for arranging everything so quickly and getting me home that night. She was delighted I was so happy and not angry that she upgraded me to Business Class for both my flights home!

Get some work done

Whenever I’m delayed for a few hours I see it as a good chance to get some work done. I know this isn’t the kind of thing everyone can do but as a writer and a blogger I can get a lot of work done in an airport. I usually travel with my laptop but even if I don’t I’ll write things up on my phone or go and buy myself a fresh new notepad and scribble down my thoughts. Being delayed never feels as bad when you’re being productive.

There are some great tips here about being productive in airports.

Check a website such as Flightright to see if you’re entitled to compensation for the delay. Knowing you could get a couple of hundred quid in return makes the waiting so much easier!

Get a nice meal

If you’re flight is delayed for a few hours you’ll be given vouchers to spend on food and drink in the airport. Most airports actually have some nice restaurants so go and treat yourself and get a decent meal. 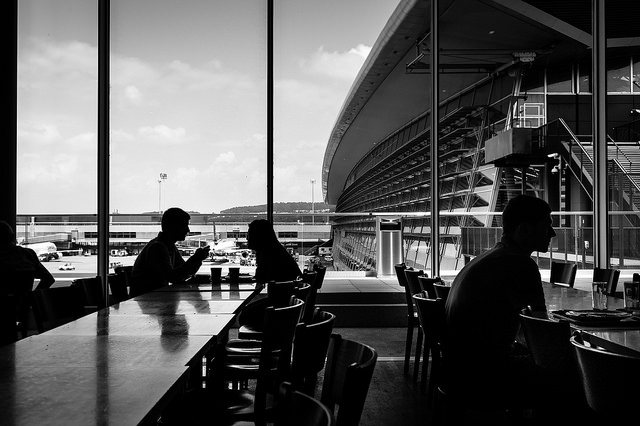 Go on, treat yourself. You’re delayed and you should cheer yourself up.

Check into an airport lounge

Airport lounges aren’t just for rich people flying first class. New lounges such as those from No.1 Traveller are really affordable but still have a luxurious and exclusive feel. If you’re stuck in the airport you might as well do it in style!

Find a comfortable seat and relax

If all else fails, go and find a comfortable seat somewhere quiet – preferably somewhere close to a screen so you can check the updates. Get yourself a coffee and a piece of cake, put your headphones on and read a good book. I don’t know when relaxing and reading a book became such a luxury in our busy lives but there’s no better time to do it than when you’re stuck in the airport.