When I ordered the Maclaren Mark II I was so excited for it to arrive. I’d done all my research, read a few reviews and couldn’t wait to take it on holiday and test it out. The pushchair ticks all the boxes and does everything I wanted it to do, so why am I left disappointed?

Here’s my review of the MacLaren Mark II 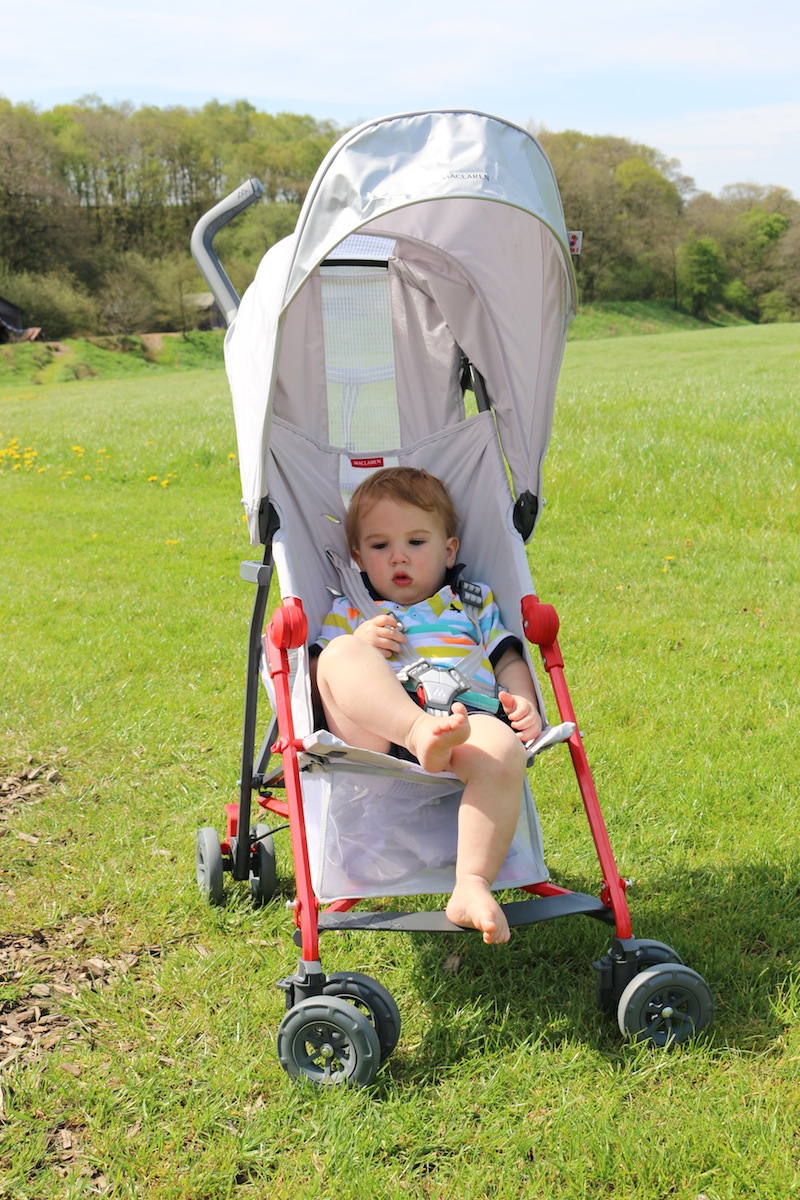 About the MacLaren Mark II

The Maclaren Mark II is one of the lightest yet sturdiest pushchairs on the market (accurate as of June 2016).

It’s MacLaren’s lightest, full-featured pushchair and weighs just 3.3kg. Yes, really! Even with a hefty toddler in it you can easily pick the whole thing up and carry it up a flight of stairs.

It also features a super easy one handed fold down so you really can fold it away and throw it over your shoulder or into the back of a car while wrestling a wriggly toddler on your hip.

It folds down to be tiny. I have a tiny car with a tiny boot (Suzuki Swift) so I actually don’t even put mine in the boot of the car, I just put it across the foot space in the back so I can free up the boot.

But it doesn’t scrimp on safety or comfort like many of the lightweight strollers do.

Yes it is but it has a few downsides too such as: 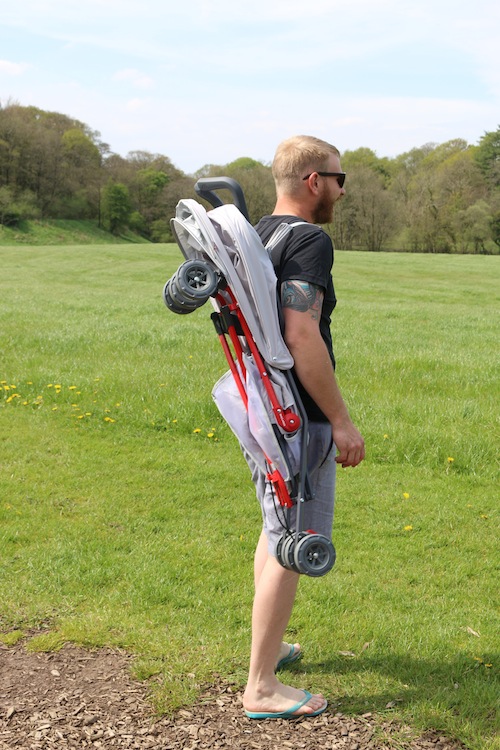 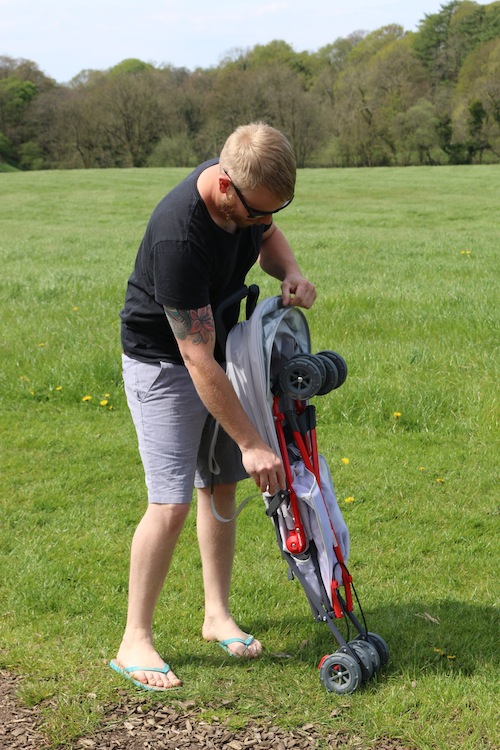 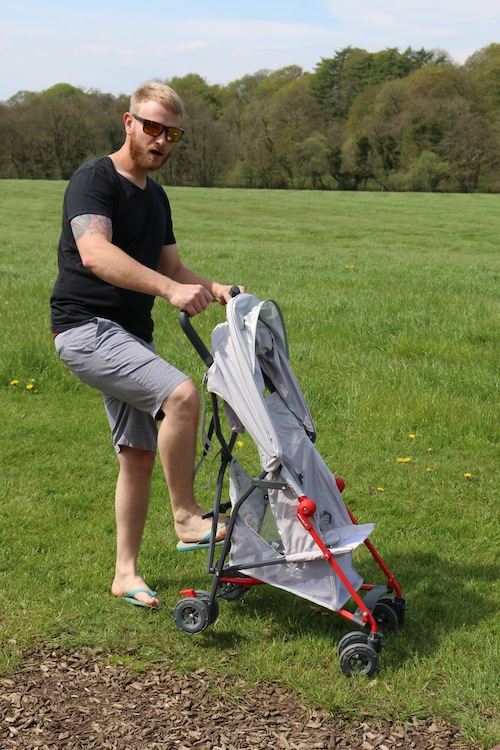 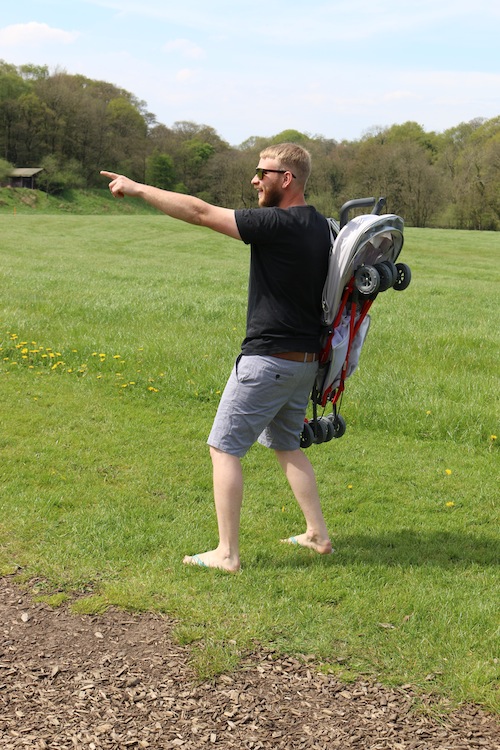 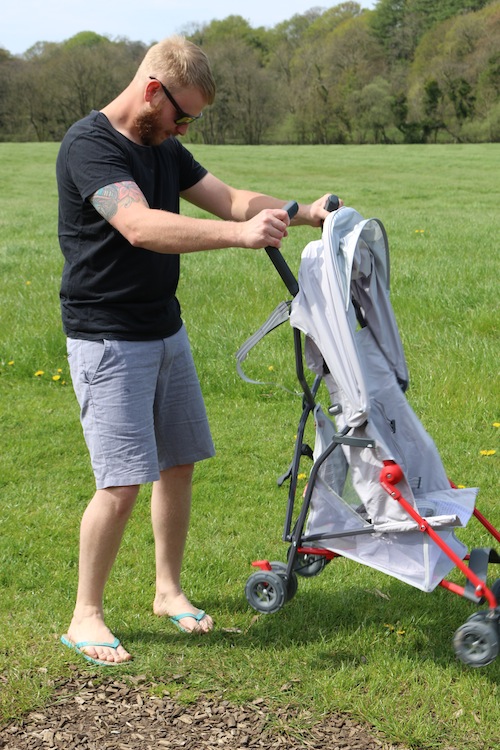 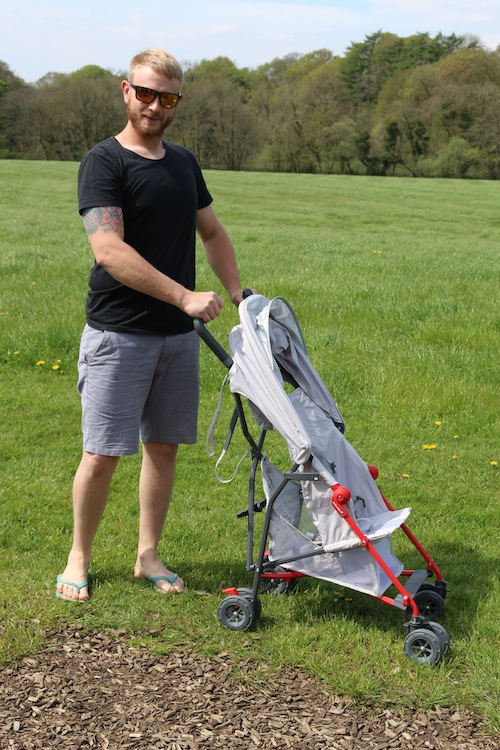 Would I recommend this pushchair?

I would only recommend the Maclaren Mark II for someone like me who has a virtually non-existent car boot – so being able to squeeze the stroller into the back of the car or even on the front seat can be handy.

I wouldn’t recommend it for travel primarily because you don’t need such a small pushchair. I was so excited to be getting such a small pushchair but once it arrived I realised that it’s worth paying a extra and having a bit of extra bulk for the extra features you need. Things like better suspension, a reclining seat and a bigger shopping basket are worth the extra space – especially when you’re travelling and your little one could spend long days in a pushchair and you don’t know what kind of terrain you’ll come across.

Yes, the Maclaren Mark II is small and it’s lightweight but you rarely actually need a pushchair to be so small and lightweight.

I NEVER carry our pushchair anywhere – mainly because I physically struggle to carry my little boy and a pushchair at the same time (I’m 5 months pregnant too) so I’ll always choose to push him. When you board a plane you push it to the doors of the plane and you may need to carry it up a flight of stairs or two but someone will always help you.

I’ll be using the Maclaren Mark II as my ‘car pushchair’. It will stay in the car and will come to the shops and maybe to the odd restaurant but when I’m going for a proper walk or anywhere for more than an hour or so I’ll take something bigger. 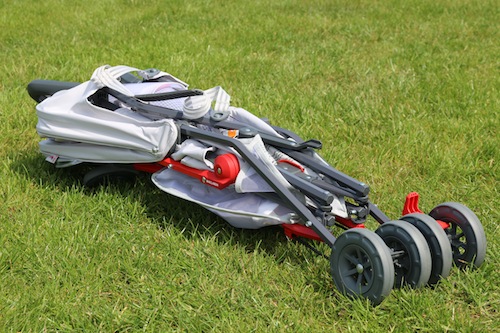 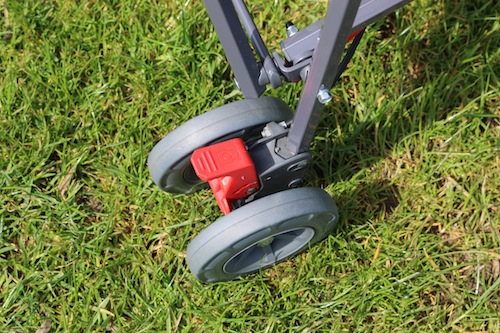 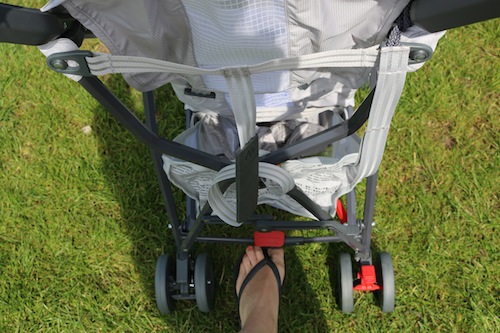 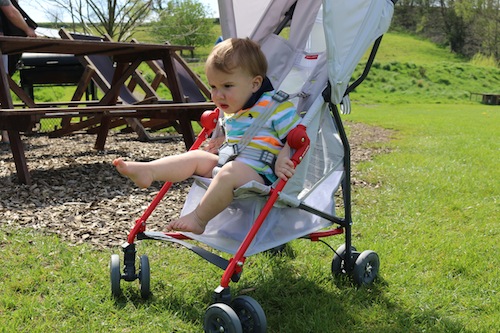 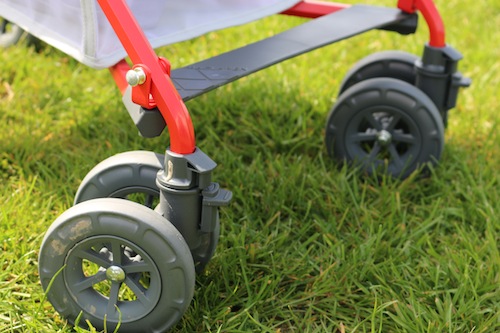 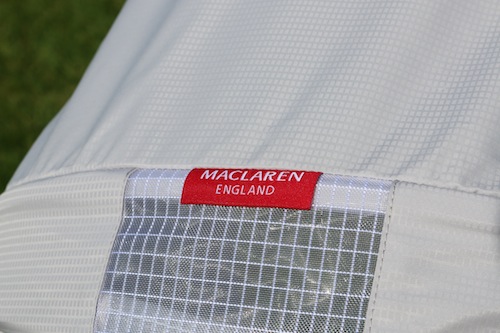 Which stroller would I recommend?

I also have a Maclaren quest stroller – a pushchair that’s been passed down through my family and George is the fifth baby to be using it – and I’d recommend something like this. OK, it’s not as glitzy and doesn’t come with a label like ‘super lightweight’ but it’s sturdy and comfortable and can be used for all situations.

If you’re looking for a travel pushchair for a newborn then I highly recommend using a combination of the Doona carseat pushchair and a baby carrier like the Pao Papoose by We Made Me. The Doona folds down to be a carseat so you don’t need to worry about travelling with a pushchair and a carseat and is just generally flipping fantastic.

Massive thanks to Prams.net for sending me the Maclaren Mark II for the purpose of this review. Delivery was pretty slow but they do have an amazing selection of pushchairs and accessories and lots of brands you don’t normally come across in the UK. They also sent me this gorgeous sheepskin footmuff which I’m looking forward to using in the winter with our Bugaboo. It’s SO cozy!

Another big thank you to Sam for being my pushchair putter-upper model and to George for posing inside the pushchair. As you can see, they both took their roles ver seriously. 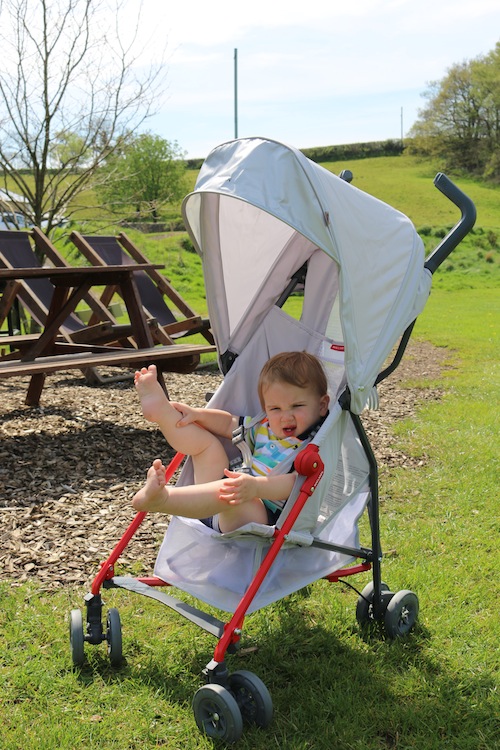 You can buy the Maclaren Mark II on Amazon for £99.

http://www.maclaren.us/Mark-II_9 I was looking for a lightweight reclinable pushchair but their website says otherwise. I am confused.

I'm not sure what's confusing here Winson? Maybe I can help if you've got a few more details? The pushchair you've linked to is a newer version so it's like the one I've reviewed but has the reclining function.

Do you know where i can buy wheels for the maclaren mark2? Please help me thank you

Thanks for the honest review Monica. I'm 7 months pregnant with my second, and we're on the move a lot, so I was about to get this, exactly for the same reason; because of it's lightness, but I'm having second thoughts considering all the factors you mentioned regarding extra room and basket space. Our car is small but can fit a slightly larger stroller easily. Also, do you know if an infant car seat can be fixed to this stroller for the newborn? If so, which car seats would be compatible? I wasn't able to find any info on this.

Congratulations Shobita!! No and infant car seat definitely can't be fitted. It's a very simple and small frame and because it can't be reclined it isn't suitable for a newborn. I've started using our Bugaboo again now that we have second baby. We have a buggy board on it so my toddler can hop on and off and I carry a sling in the shopping basket so when my toddler gets tired he can go in the pushchair and my newborn can go in the sling. It's working quite well so far! We barely use the Maclaren now but I'm sure we will once our newborn is a toddler.

Hold onto this pushchair Monica! It may not be great for younger travellers like George, but for 3 year olds who love to walk and can't quite manage hours of sightseeing, the option of popping it over your shoulder is fantastic. It's also great on hot days - much more airy than our bugaboo. Love the fact we can keep it in the car (just in case) and fit the dogs in too. But I agree, although it handles cobbled French streets surprisingly well, it wouldn't do well on country walks, and it needs a bigger basket!

It definitely does have lots of pluses! It's good to know we'll get some use out of it when he's a bit older too! At the minute George likes to walk behind it and push it himself so that comes in handy too.

Fab, honest review Monica. We bought a buggy with a handle for carrying once collapsed and I thought, oooh how handy and useful and like you say, we've never had to use it. But a bigger shopping basket and more comfortable ride for the little man - it's essential on long travel days. And congratulations on number 2! I had no idea - really happy to hear it. x