I’m a self-confessed bookaholic and this is the reason I love the travel part of travelling. Give me a 10- hour journey and you’ll find me on a bus/train/plane/boat completely absorbed in a good book.

This is one of the only times when I can devour a book without any guilty pangs coming from my laptop where work is waiting to be completed, or from a house that needs cleaning, a friend who needs calling or a gym membership that never gets used. This is pure book-time and I love it.

I was thrilled when Visit England invited me to take a Literatour in Kent, the home of one of the greatest British writers of all time, Charles Dickens. This year also marks the bicentenary of his birth and 2012 has become an international celebration of his life and work.

Literature tours are a growing trend for myself and fellow bookworms in England. It’s where you can take a tour around the towns or cities where famous authors and you can see the sights that inspired their creativity. 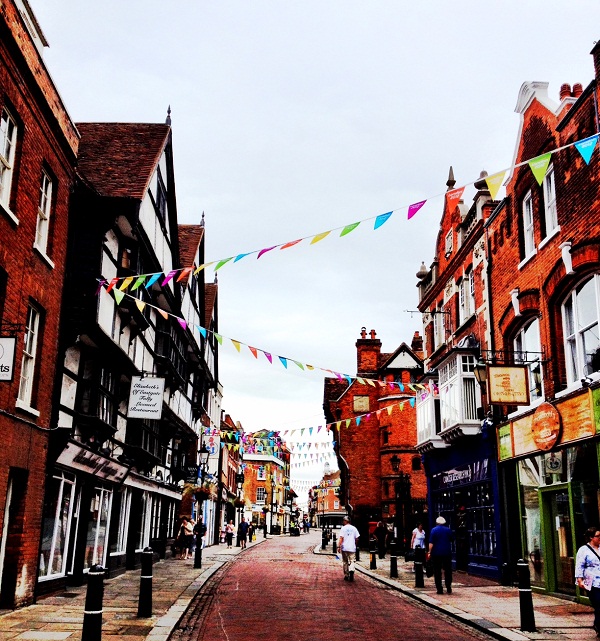 My boyfriend and I arrived in Rochester within an hour from London and were welcomed by sunny skies and a pretty town that was slowly coming to life. It was the day after the Olympics Opening Ceremony and it was wonderful to be in such a peaceful town and away from the manic crowds of London.

Everything in Rochester is on the high street or just a minute or two away so it is perfect if you only have a few hours to spare.

We wandered up the high street that is filled with quaint boutiques, vintage shops and Britain’s largest second hand book store, Baggins Book Bazaar. I could have spent all day wandering between the walls of books and inhaling that old book smell but we had exploring to do… 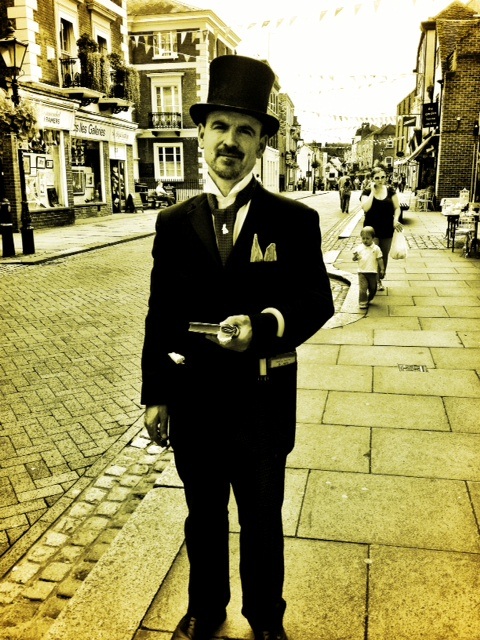 To see the sights properly we took a costumed tour with Footsteps in Time. Does anyone have any idea which Dickens character was our tour guide? 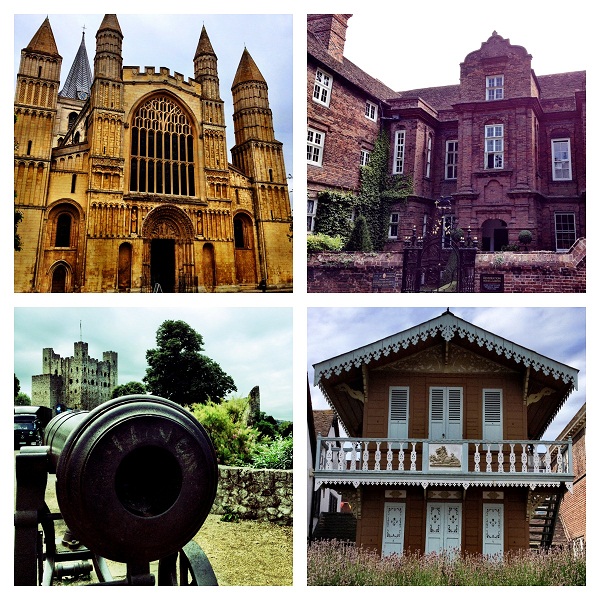 PHOTO: Top left – Rochester Cathedral, Miss Havisham’s house in Great Expectations, Rochester Castle, Charles Dickens’ summer house where he wrote a lot of his novels. This used to be at his home on Gad’s Hill but was moved to a peaceful spot in the town centre.

We began on the narrow cobbled alleyways that led to Rochester Cathedral, the second oldest cathedral in the UK. It may be over 1,400 years old but we were welcomed inside in a really modern and friendly way. We were encouraged to take photos, check out the modern art and Tweet a few pictures. Now there’s a vicar getting down with the kids.

There is a tombstone in the cathedral grounds for a Dorrett family and it is thought that this is what inspired Dickens to write Little Dorrit.

We visited the Guildhall Museum that afternoon which appears in Great Expectations and you can find explanations of all the main Dickens sites in town. You really have to be a diehard fan to get the most out of this.

After a little more shopping and afternoon tea we jumped on a bus to the Historic Dockyard. (Take buses 140. 141. 151 or 156 from behind the visitor centre on the high street.)

We took a Dickens Dockyard tour with the lovely Irene who knows everything there is to know about the dockyard and Dickens’ early life there. His father worked in the dockyard and as a boy he spent a lot of time there. You can find many references to the dockyard in The Uncommerical Traveller and Irene painted a historic picture as she told us tales from Dickens childhood.

Rope is still made in the dockyard and the huge space is still used for film crews. We just missed out on seeing the crew filming Les Miserables but did catch a few glimpses of Call the Midwife. 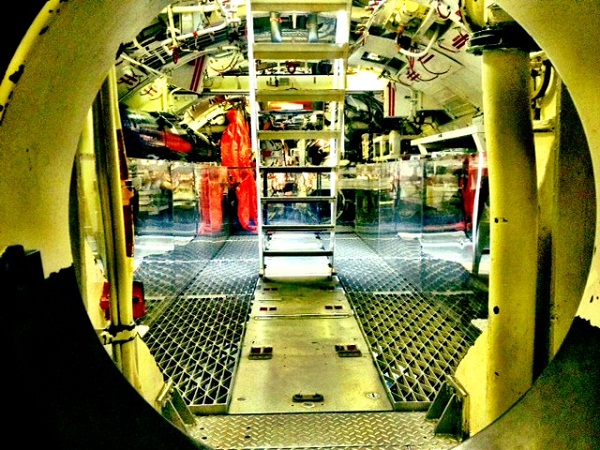 The HM Submarine Ocelot tour has nothing to do with Dickens but we couldn’t resist the opportunity to get inside a submarine. After just a few seconds I felt claustrophobic at the thought of spending months in the space that is filled with engines and buttons, levers and pipes in every nook and cranny. They don’t know what the sub was used for by they assume it spied on Russian subs during the Cold War. 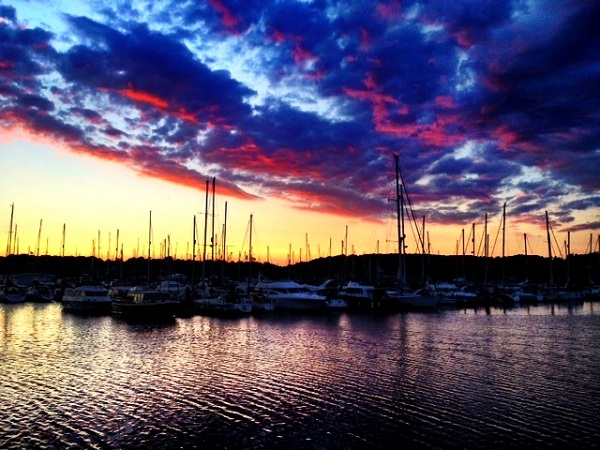 Arriving at the Ship & Trades and I instantly felt like I was on a real sea side holiday. OK, we were miles from the sea, but being surrounded by the marina and the nautical theme gave the place a great holidayish atmosphere. We spent the evening devouring a fresh seafood feast and drinking wine as the sunset behind the boats. I felt a million miles away from London and the busy city.

I was up early the next morning and first in line for Dickens World (which is just next to the hotel and the dockyard) where you journey back to a Dickensian England. This is really a place for kids but the big kid inside me loved it. As well as characters from Dickens’ novels there is also a Great Expectations boat ride, the Haunted Man, a 4D cinema show in Peggotty’s Boathouse and Dotheboy’s Hall School Room (where I got detention for getting my sums wrong which was very embarrassing). 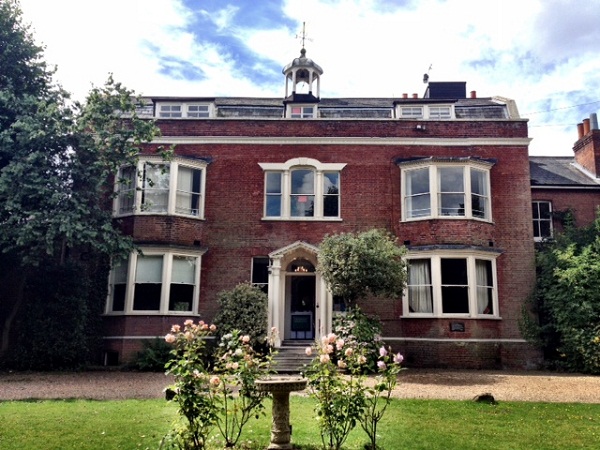 The final stop on our Dickens tour was to Gad’s Hill Place, Charles’ country home until the day he died in 1870. I feel like I know Charles pretty well now so we’re on first name terms.

Dickens first saw the estate when he was a boy and his father told him if he worked hard enough, he might one day own such a place. This was when he was just 9 years old and I love the thought that he boyish dream came true.

The house is a school during term time and is now being used as a pop-up museum during the summer holidays. 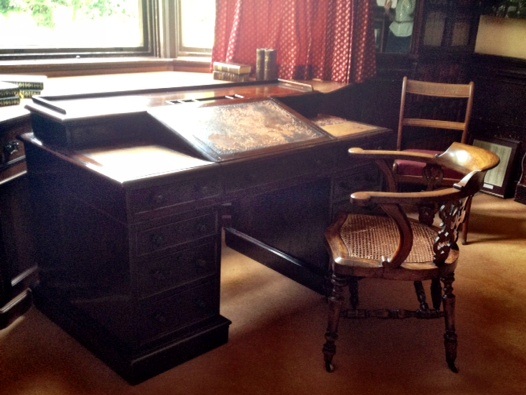 It was incredible to think that 150 years ago Charles Dickens used to sit in this chair. He was sat here when he wrote my favourite book, Great Expectations. I really had to resist the temptation to give the chair a little stroke and instead just took about 15 photos of it. I’ll admit that they aren’t the most exciting photos in the world but, come on, I photographed the most important piece of Charles Dickens memorabilia around.

Are there any other bookworms out there who would love to take a Literatour? If so, where would you do it?

As always, you can find more photos from my weekend in Kent on my Facebook page.

Many thanks to VisitEngland and VisitKent for organising the weekend. All thoughts, comments and experiences are, of course, my own. Who else would want to stroke a chair?

Awesome post Monica! Your photos took me back to the 17th century old English town!

Great post, I love the idea of a literatour! I would love a Daphne du Maurier tour, ah to return to Manderlay again! Some bleak Cornwall locations, Jamaica Inn. Yes, this would be my literatour of choice!

Great post Monica! I'm bookmarking this one for next time I'm in Kent. While in J-school I also studied Poli-Sci so I have a keen interest in ancient philosophy. Would love to do a Literatour of Locke and Hobbes in England, Rousseau in France, Marx in Germany, Freud & Jung in Austria!

Wow, I hadn't thought about how many potential literatours there could be to do! You could do a whole tour around the world doing literatours....