THE OLD STOCKS INN – Things are not quite as they seem in Stow-on-the-Wold. There’s a defector in town. A quiet rebellious type; happy to rub shoulders with the elegant tearooms, polished antiques shops and prim galleries, before necking a Gimlet and heading back to the bar with a swagger that’d put a Bond villain to shame.

If you’ve ever visited Stow, you’ll know it’s a town that typifies the Cotswolds. And on first glance, The Old Stocks Inn fits in perfectly, in an amber-stoned, sash-windowed, traditional way.

Yet beneath the 17th-century coaching inn’s honey exterior there’s a sassy juxtaposition: once an antiquated Cotswold B&B, The Old Stocks Inn has, just recently, turned its back on traditional belt and braces, and slipped into something altogether more handsome.

So dangerously sexy is he now, with 16 drop-dead-gorgeous rooms; so perilously charming, with a brass-topped bar and naughtily-long cocktail menu, that before you know it you’ll be under his spell, wrapped up in a duvet for a second night without so much as an ‘Out of the Office’. 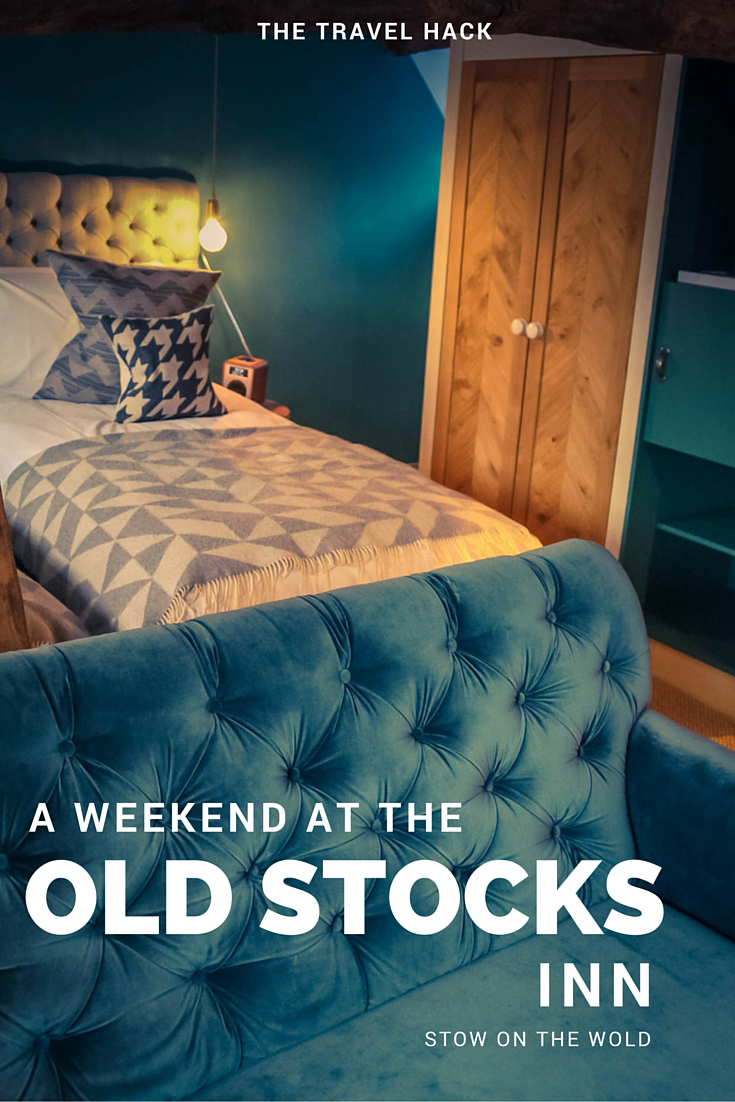 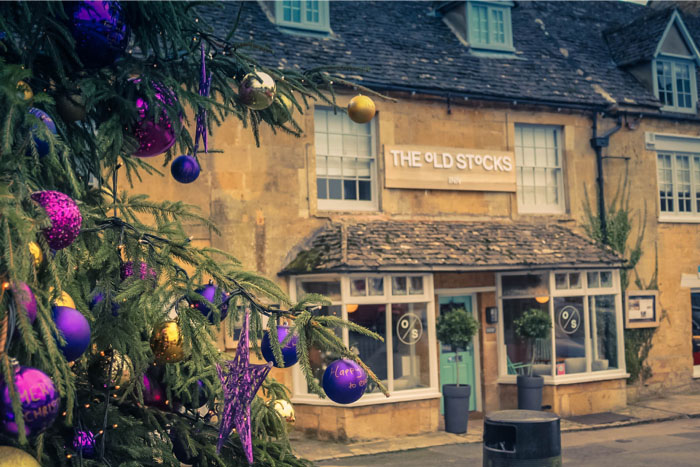 Although it boasts an enviable location in the Market Square of Stow, overlooking the old penal stocks, The Old Stocks Inn needed to cast off its tired, fusty looks when it did.

In order to remain competitive in a wool town that attracts legions of tourists every year, it required an edge. Something to surprise and delight visitors on city breaks as well as those on long-haul escapes. The answer? The new owners created a hotel of two halves:

One half keeps the Inn’s original features alive (for the tourists who’ve come to see Cotswold heritage, such as American and Japanese travellers), and the other flaunts a trendy new character (for weekenders slipping out of Shoreditch, yet unwilling to leave it behind).

Couple Charlotte and Richard, who run the hotel today and are the most helpful of managers, headed up the refurbishment of The Old Stocks Inn. After many months’ hard work, The Old Stocks Inn re-opened its doors in March 2015 – revealing a devilish personality and a slick new brand. 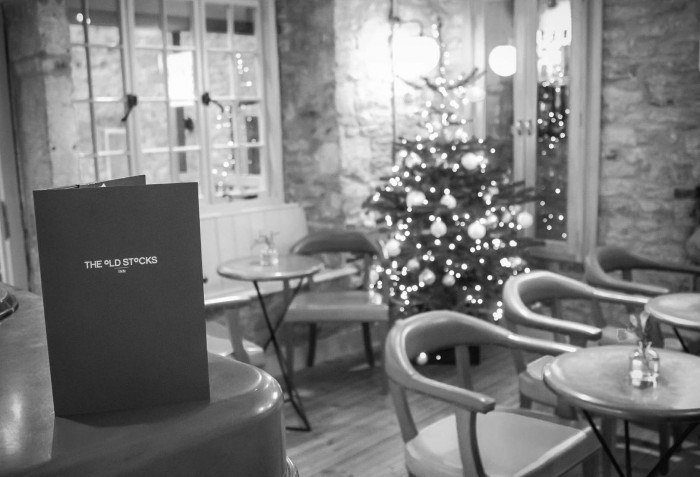 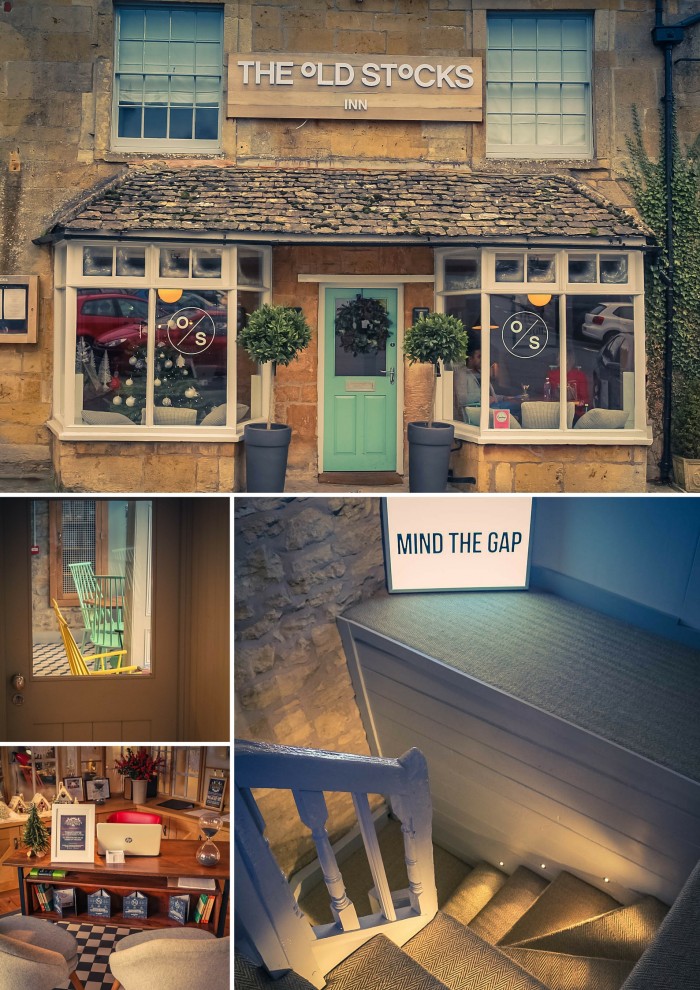 THE STYLE AND CHARACTER

I couldn’t help falling for The Old Stocks Inn the moment I went inside. It was like going through the wardrobe into Narnia. As my foot touched the threshold, the Cotswolds melted behind me like hills in a mist.

Instead of rose cushions and vintage teacups, which could’ve easily been at home here, The Old Stocks Inn I stepped into was a playful Scandinavian wonderland: uncovered light bulbs, grey-wool easy loungers, Ercol-style chairs in a pastel-coloured palette, and strategically placed lightboxes displaying cheeky quips: ‘It’s never too early’ in the bar; ‘Mind the gap’ on the bending stairs.

And against this deliberate simplicity, retaining The Old Stocks’ authentic charm, the original beams, crooked stone walls and sloping floors of the original coaching inn, now dressed in their contemporary best.

Delighted, I checked in at the freestanding reception – a simple desk and a chair; clocked the adjoining Little Stocks Coffee Shop – the hotel’s cosy, clever guest bolt-on; admired the homemade gingerbread village display – made by the hotel’s talented pastry chef who also stocks the coffee shop, and headed to my room to see if the Inn’s sex appeal ran more than just skin deep. 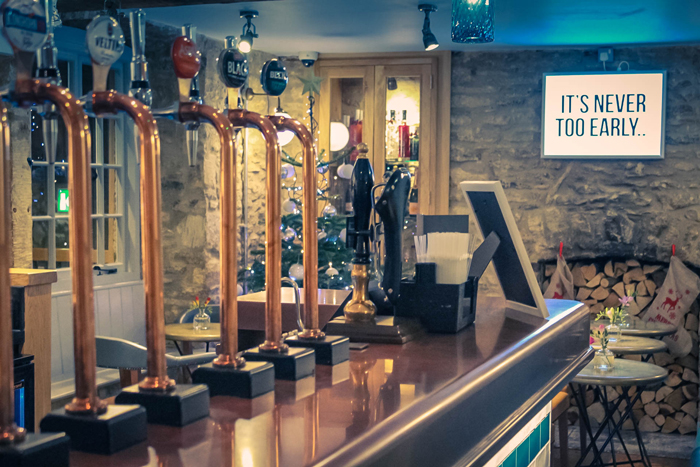 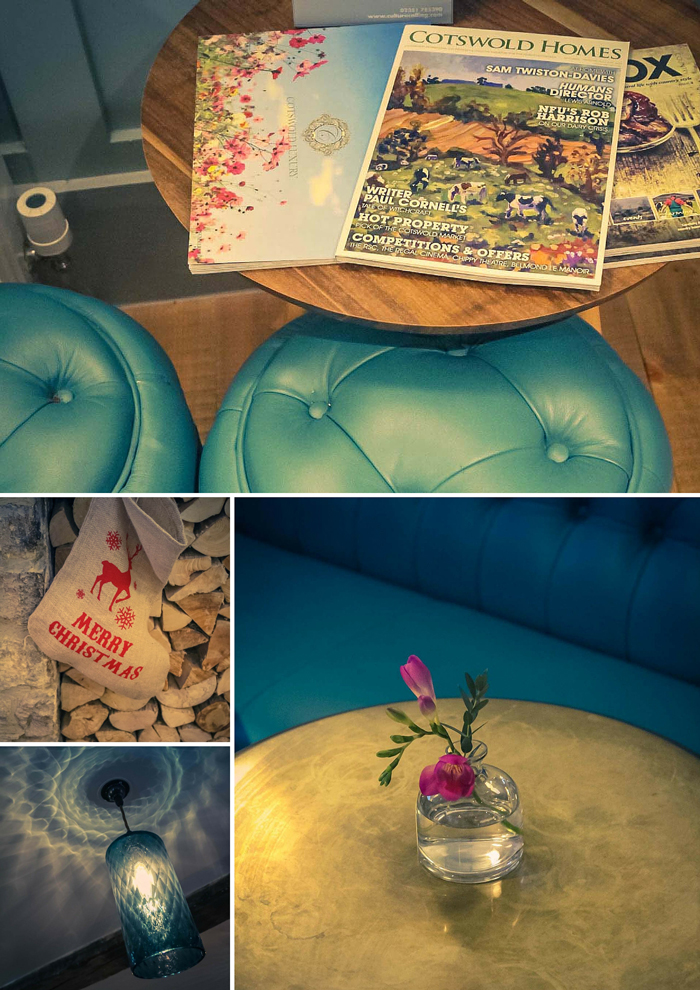 The 16 individually styled rooms in The Old Stocks Inn come in four categories: House, Garden (with dog-friendly private terraces), Bunker (with a triple bunk-bed and games console for family stays) and Great (with a complimentary minibar).

Mine room was number 21 – part of the Inn’s ‘Great’ six-room collection. It was waiting for me in the oldest part of the Inn, at the end of a creamy corridor, which I reached by a delightfully wonky, luxuriously carpeted staircase.

As the door unlocked I could see heavy wooden beams, as rich as dark chocolate, and underneath them was a beautiful space, styled with the same Scandinavian charisma that had enraptured me downstairs.

At one end of the room, a midnight blue wall offset two plump twin beds, reclining against a plush-grey headboard and fattened by dumpy woollen cushions. And illuminated under a free-hanging spotlight, a digital radio trickled Classical FM softly into the room.

To the right of the beds there was a double wardrobe with a light that flicked on as you opened the door. And next to that, a mini-bar with fresh milk in a Kilner jar, plus a complimentary selection of soft and ‘hard’ drinks, including Fever Tree Tonic and Chase Gin – partners of the Inn.

Unsurprisingly, my heart skipped a beat.

At the foot of the beds, a velvet-clad Chesterfield-style sofa idled elegantly, dressed in the same midnight blue shade as the wall. Completing the tasteful lounge was a minimalist wooden coffee table laid with ritzy magazines, a desk complete with an Nespresso machine, hand-drawn fold-out map of Stow, and an impressive 40” smart TV on the wall.

The glamour swept through into the bathroom as well. Diagonal ice-white tiles ran the length of the walls, whilst a black and white hexagonal patterned floor carried you towards the classy centre-piece: a large roll-top bath.

It was sophisticated, in a laid-back, not-trying-too-hard kind of way. And I sunk into the sofa, complimentary gin in hand, determined to stow away here for as long as possible. Or at least until the gin ran out. 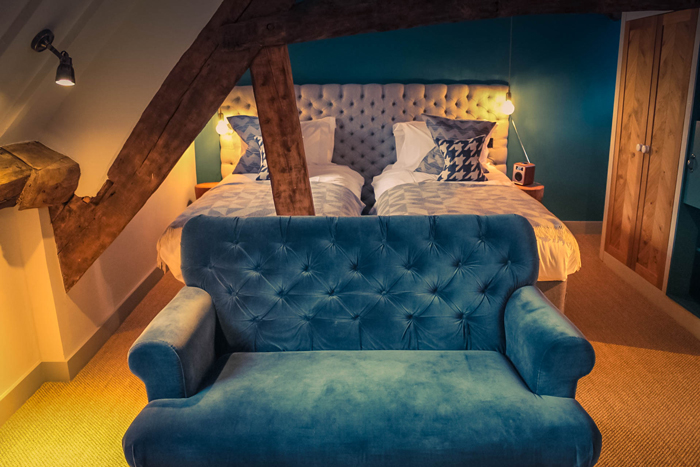 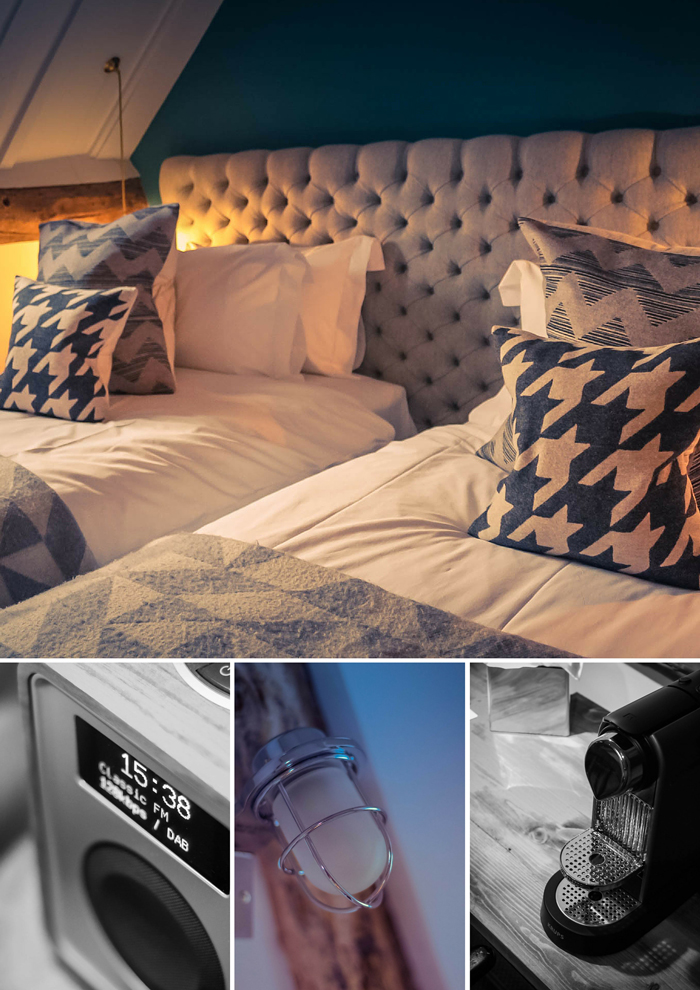 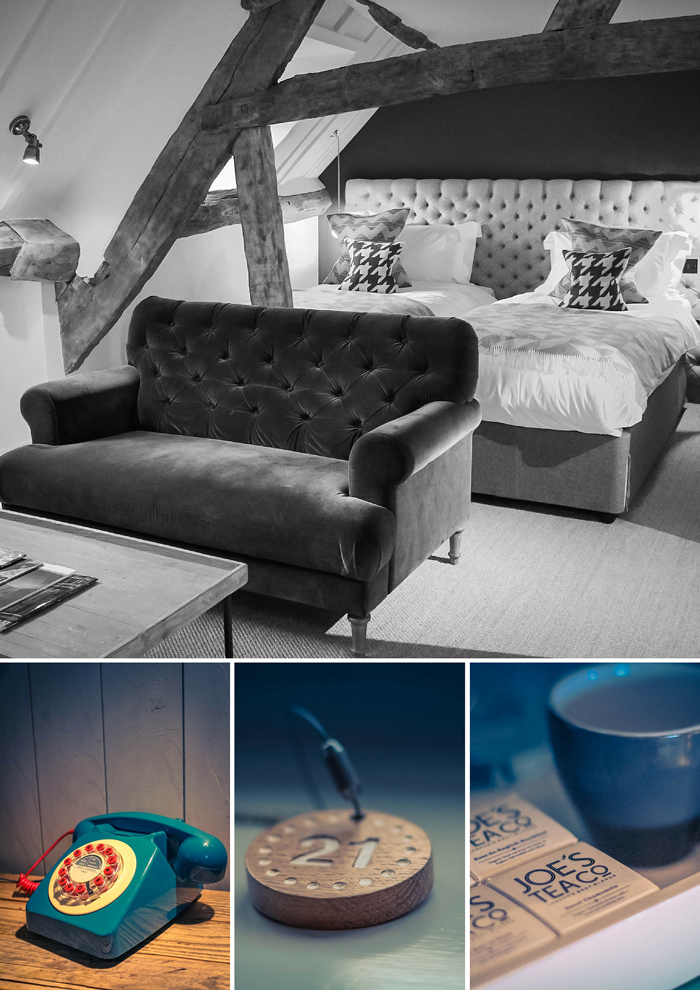 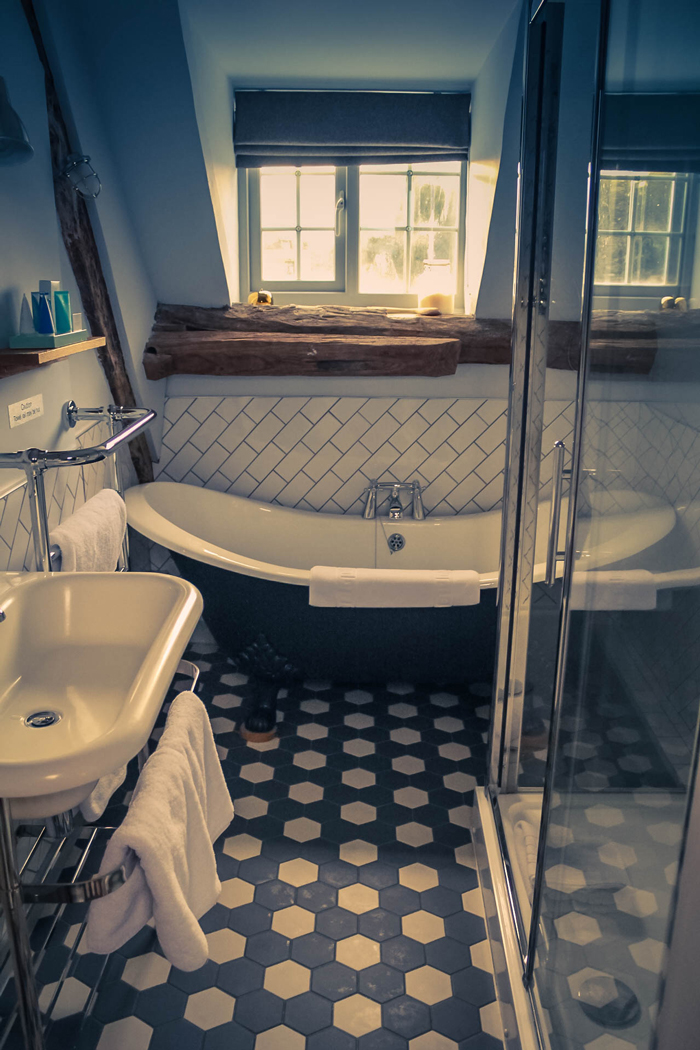 THE FOOD AND DRINK

Downstairs, The Old Stocks Inn splits into three different rooms: the hip polished-brass bar, fringed with teal leather stools and stocking more Chase spirits options than you’ve seen in your life; an adjoining lounge/library, stylishly kitted out with books, games and contemporary chairs and sofas; and an airy on-trend restaurant that also doubles as the breakfast room in the mornings.

The easy-breezy style means that people feel equally relaxed walking in off the street for a cocktail, as those supping a quick snifter before bed.

And speaking of cocktails… what a menu: quirky, with a quintessentially British kick. We (my friend joined me for the evening) happily made our way through a rainbow of vodka and gin-laced tastes, including a Muddy Puddle, a Breakfast, a Fifty Pounder Gin, and a Chocolate Martini. All of which were kindly brought to us by Richard, the indefatigable manager, who is happy to help out wherever needed.

Had dinner not been booked, we would have sunk into the chairs for the entire evening, picking off the cocktail list with the cool, calculated precision of marksmen.

In the comfy restaurant, our waiter was exceptionally attentive – our glasses were filled as soon as we drained them. And the food, which is the masterwork of Head Chef, John, arrived as sharply as the drinks.

Like the cocktail menu, the dinner menu sang with simple creativity – the curiously named ‘Parcel in a Puddle’ started my meal with aplomb (tomato and vanilla soup, with a chicken and tarragon filo parcel).

As I expected, the dishes that followed – created from fresh local, seasonal ingredients – seduced me like the rest of the hotel: melt-in the-mouth turkey with potato fondant, apricots and stuffing, and dark chocolate Crème Brûlée with orange, stem ginger and honey shortbread to finish-up.

The only area that didn’t zing with the same high-gloss was breakfast the next morning. I would’ve relished a little more choice on the cooked menu. Although the banquet table, which was laid out with fresh fruit, pastries and meats, was a mouth-watering sight for hungry eyes. 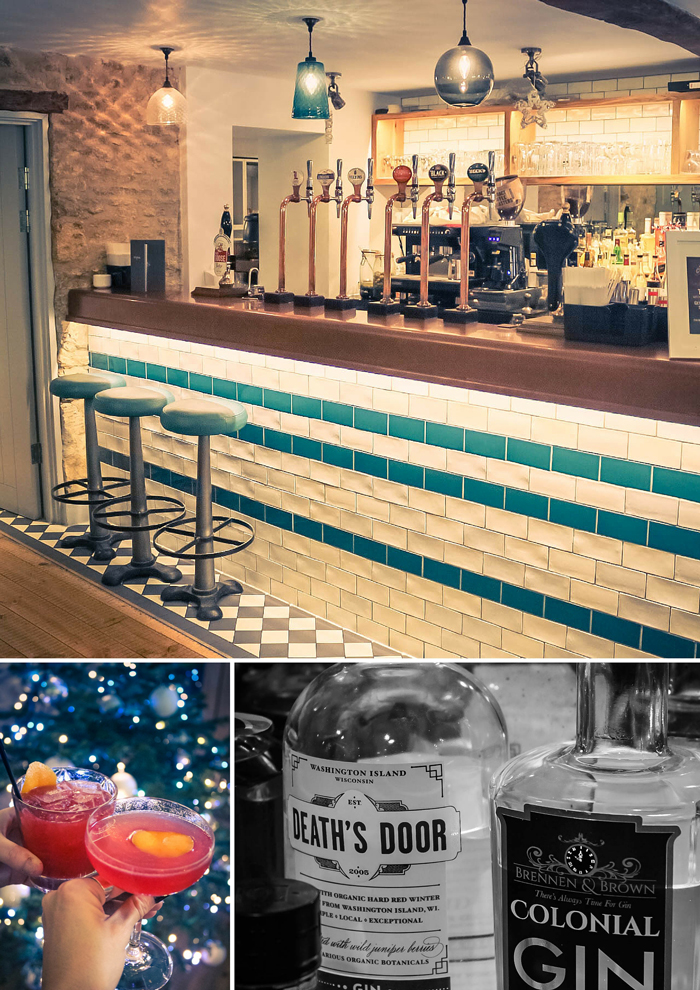 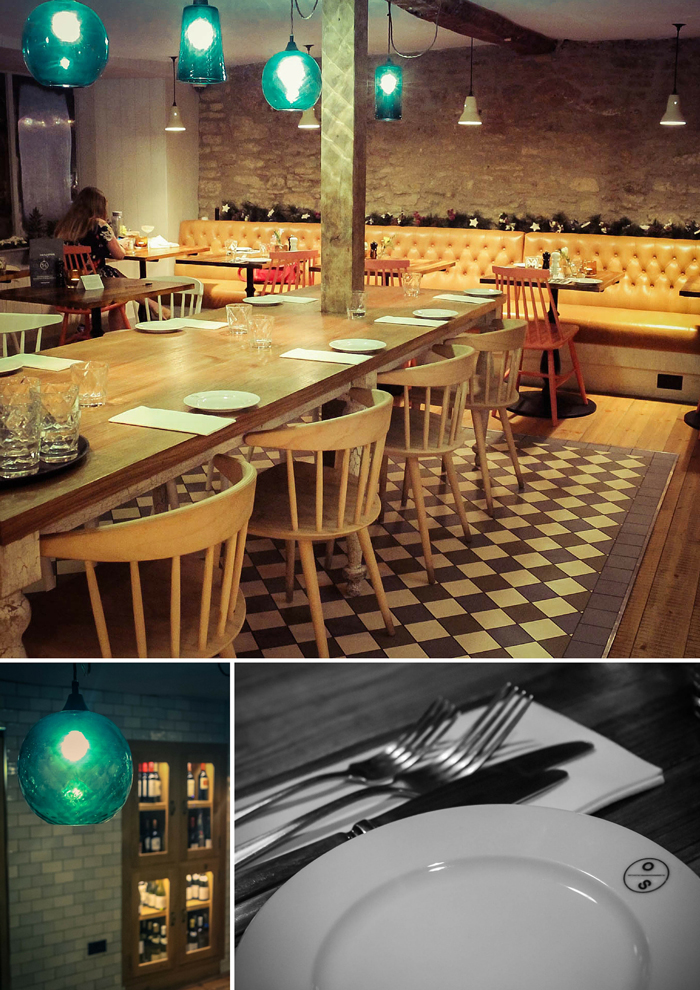 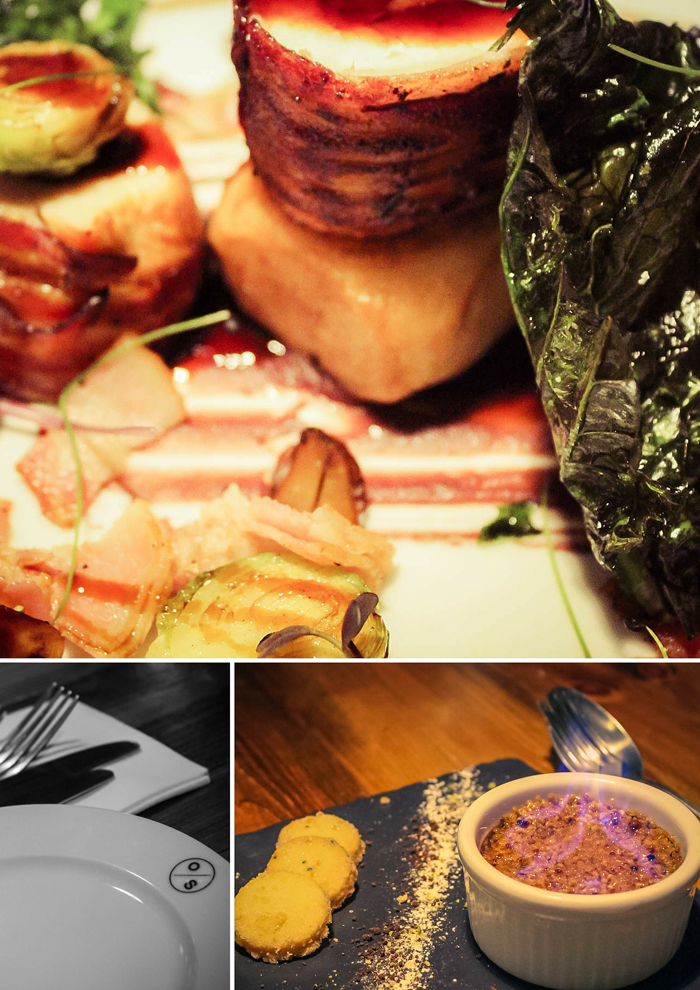 I was sorry to leave The Old Stocks Inn. It is a hotel that has it all: the warmth of good service, the authenticity of the Cotswold countryside, the playfulness of modern interior design, and the flair of trendy in-town bars.

Without question, this place bewitched me  during my 1-night stay; like the handsome stranger you meet once and long to see again.

Luckily, I took his number. And I promise, I will be calling soon.

I enjoyed a complimentary one night DB&B stay at The Old Stocks Inn in Stow on the Wold.  As always, this review is an honest reflection of my stay and my opinion of it. It would be bonkers to not write the truth!

What a beautiful hotel! They've done a fantastic job there.

Wow, this place looks right up my street! The decor looks fab! I've been thinking about going to the Cotswolds for a while now, hopefully it'll be on the cards soon and trying the Old Stocks Inn would be fab too!

They have charming style when it comes to interior design. Lovely images. Thanks for sharing.

Wow, your photos make me want to go there now! I love the modern, charming feel it has to it. We want to find gems like this when we make our trip that way! Thanks for sharing.