Today I’m sharing what it’s really like to ride in a hot air ballon after my incredible early morning flight in one!

It was 5.30am and the field was covered with a mystical blanket of cloudy mist. The sun was rising and streaming through the trees as a group of guys unloaded the enormous hot air balloon basket from a trailer. Then out came the balloon which was unrolled and spread out across the damp grass like a picnic blanket for a giant. It was like a magician’s trick as they kept unrolling and unrolling and more and more balloon was laid out.

As the sun rose, the enormous balloon was inflated by a roaring flame and the 16 excited passengers gathered around the basket. 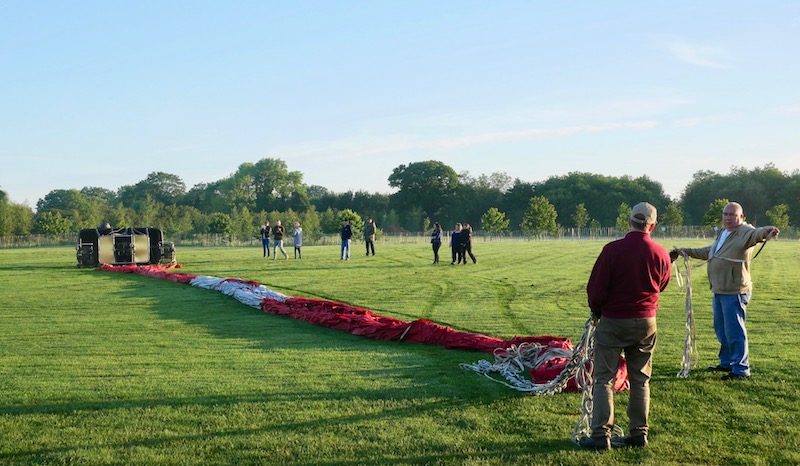 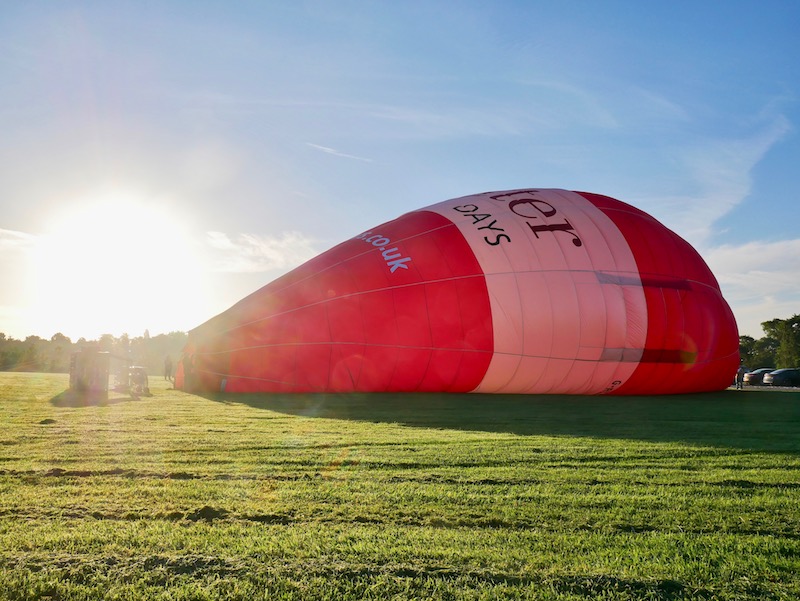 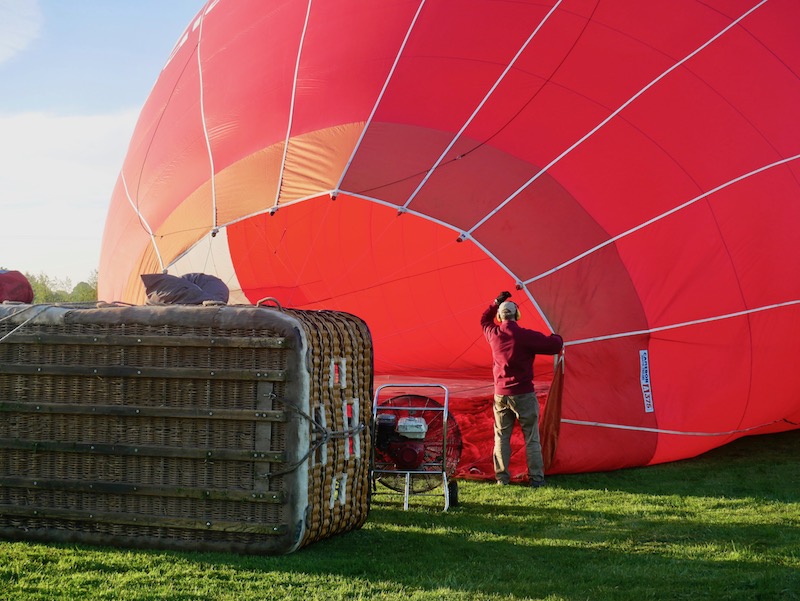 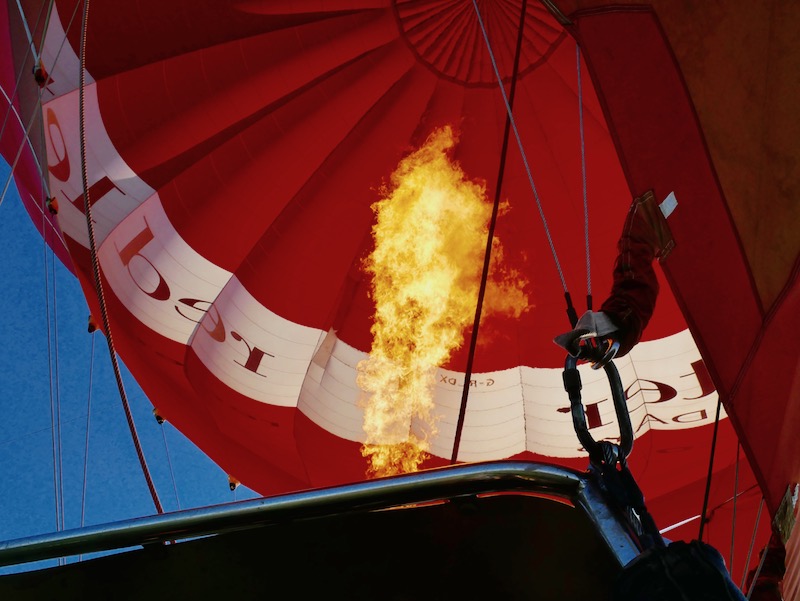 I climbed in enthusiastically, excited to be finally doing something I’d dreamt about for years. Riding in a hot air balloon is on my 30 Before 30 Bucket List and I’d been reminding myself of this every time I saw a balloon gracefully floating among the clouds.

But now that I was inside this wicker basket, it seemed so small and flimsy. It was little more than my dog’s wicker basket and the thought of floating up into the sky in a dog basket filled me with unexpected terror.

I’m not normally scared of things like this. I love flying and, while I’m not exactly an adrenaline junky, I do like the odd adventure sport. Going in a hot air balloon is peaceful and relaxing so it hadn’t even crossed my mind that I’d be scared!

I busied myself taking selfies and waving at the kids who had come to watch their parents in the balloon. I asked the pilot questions, “How high would we go?” and “How long have you been flying balloons?” (about 2,000ft and 30 years) and took a few more photos in an attempt to keep myself busy and not thinking about how little and vulnerable I felt.

“Each and every ride is different,” the pilot told us. “You don’t have much control over the balloon other than going up and down so you really have to let the winds take you. You don’t know where you’re going to land and can’t control the direction you go in.”

Well that made me feel better. Not.

There’s something terrifying but ultimately relaxing about this lack of control. In a world where we try to control everything, it’s scary floating up into the sky and letting nature take you in whichever direction she chooses. You can’t plan to land in a certain field or head in a certain direction, you just have to relax and trust that it will be OK. Once you’ve accepted this, a hot air balloon is the most magical way to travel. 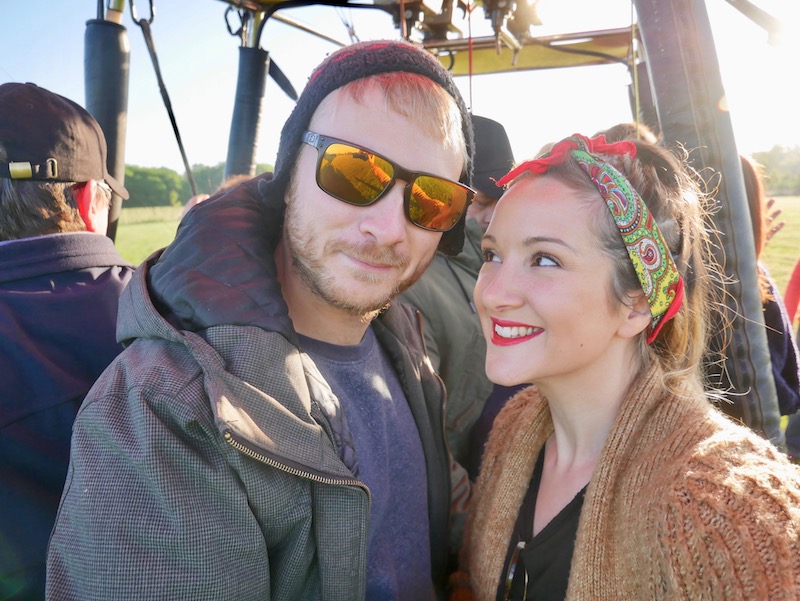 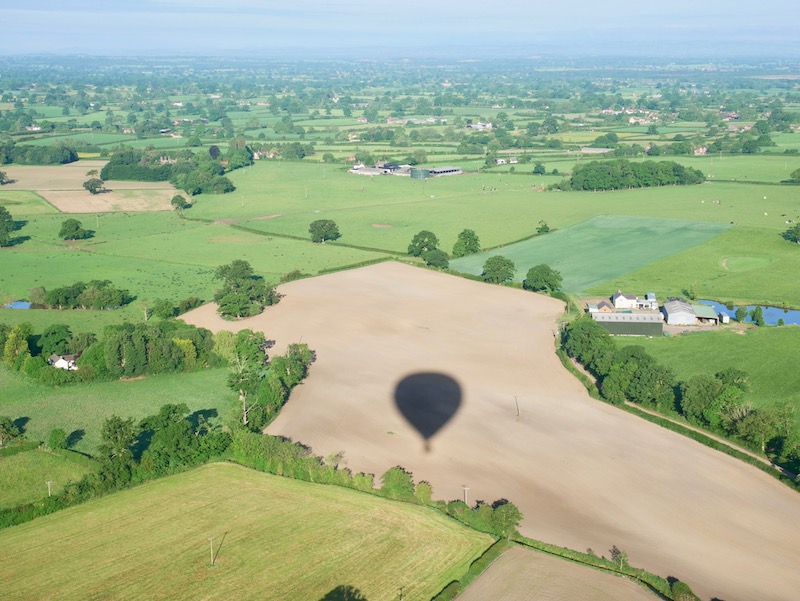 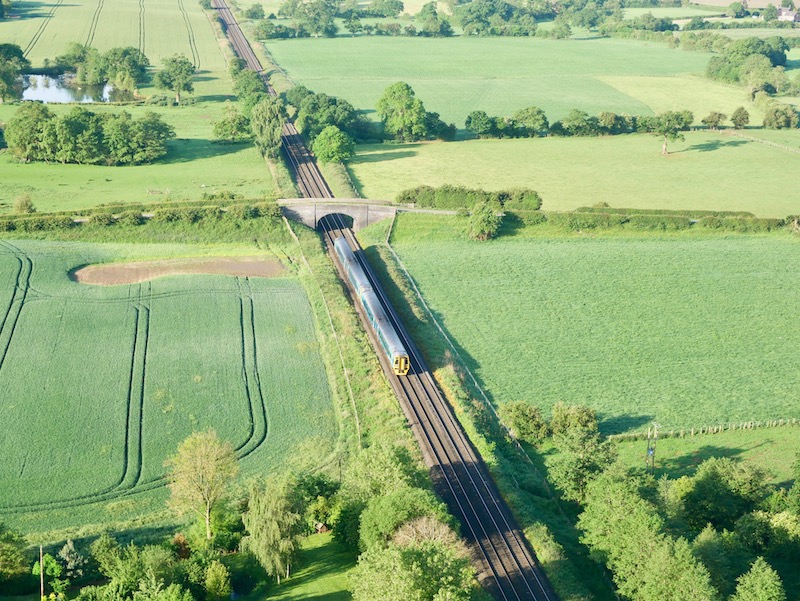 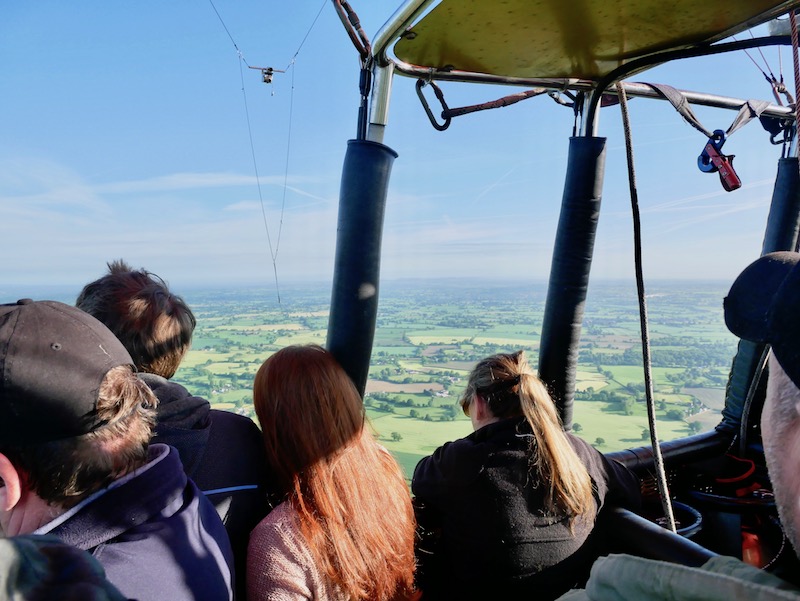 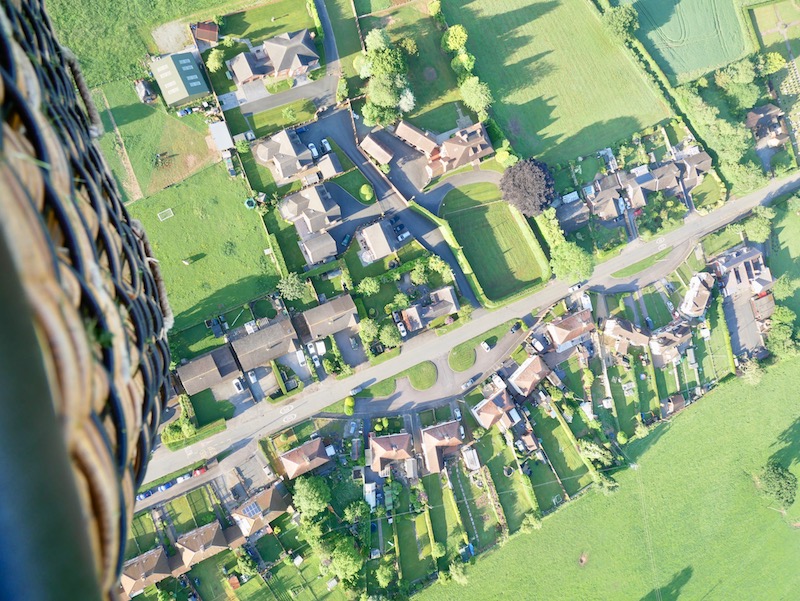 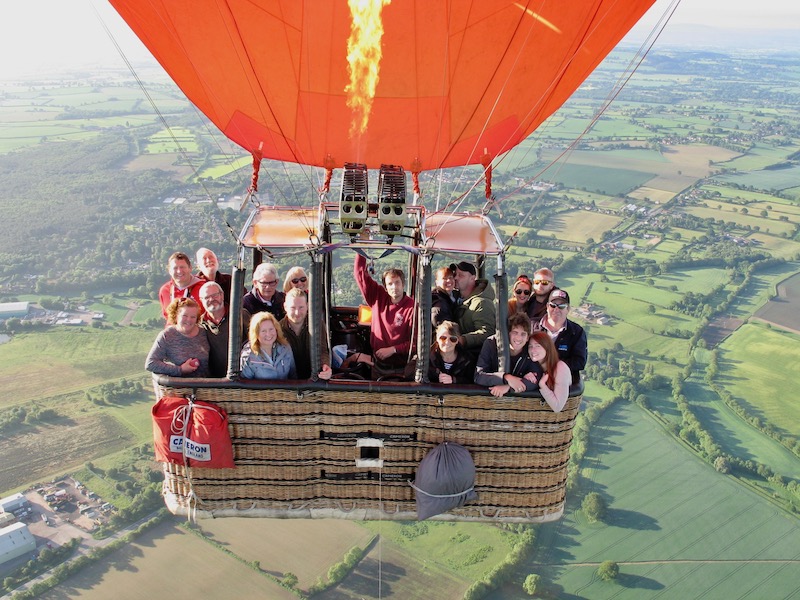 Another jet of fire was shot into the balloon and the guys on the ground released the ropes. With a little jolt and a cheer from the spectators on the ground we were off.

We rose up so gently that if I’d closed my eyes I wouldn’t have known we were moving. It was so steady and the basket felt so secure and firm. There wasn’t a wobble or even a tremor or a belly flip, it was just perfectly still.

As the people below us because smaller and smaller I looked up to finally appreciate that view. And wow, what a view.

With nothing between you and the vast landscape it looks even prettier. It’s different looking at it through the window of a plane. When you’re on a plane you’re in a little bubble and you’re separated from the view. But in a balloon it’s right there, you’re in the landscape. You can reach out to the air and touch it. You can hear every cow moo and every sheep bleat and every dog bark. You can feel the stillness of the crisp morning air and the warmth of the sun. You feel like you need to whisper so you don’t disturb the birds so there’s this hushed, excited silence.

We’d been incredibly lucky with the weather for this balloon flight. More than 50% of hot air balloon rides are cancelled in the UK due to bad weather, meaning most people’s flights are cancelled and rescheduled. Many people’s flights will be cancelled multiple times and if you’re restricted on dates you could be waiting for months. We were the only people in our balloon who had managed to get out on our first attempt and we couldn’t have wished for better weather. It was bright, sunny and clear with just the right amount of wind to steer the balloon through the sky.

When we rose up to 2,000ft the air was so still we barely moved. We hung up there for a while, enjoying the views and pointing out the distant landmarks. It was incredible to see how the skies changed above different areas. When we looked towards Wales the sky was clear and blue, but a murky haze lingered over the distant city of Liverpool.

Our hour in the sky was coming to an end and our pilot began scouring the fields below for a suitable place to land. While he doesn’t have that much control over which field he lands in, he will do his best to find a good spot. It needs to be a field with short grass to avoid ruining any crops but it can’t have any animals in it. He doesn’t want to get too close to train tracks or roads and doesn’t want to go directly over any animals in case they’re scared. He told us that most farmers are very accommodating when he lands in their fields – provided he doesn’t harm their crops or animals. He always leaves a bottle of scotch to sweeten the deal so I’d imagine some farmers would welcome his landing! 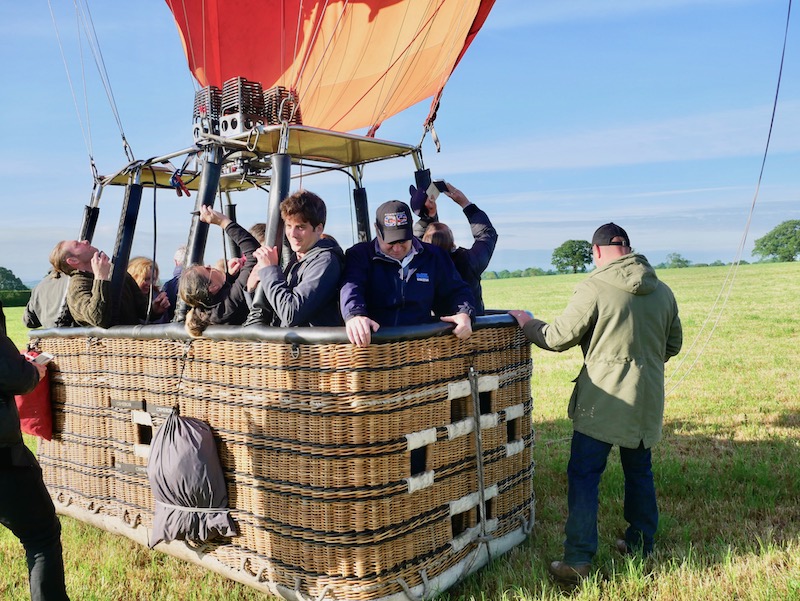 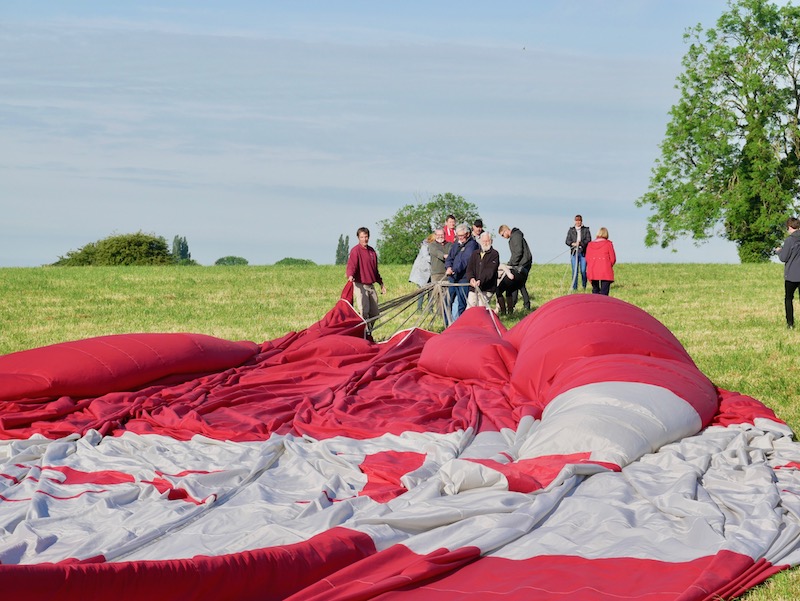 Our landing was almost as smooth as the take off. We were told to prepare ourselves for a bumpy landing and adopted a secure position in the basket. I gripped firmly to the ropes at my waist and bend my knees to take the harsh impact I was expecting. But it was nothing more than a little jolt before the basket was securely planted in the field.

The balloon deflated like a sad sail collapsing in the breeze. We all helped to roll it back up while a couple of Land Rovers made their way to the farm to pick us up.

I’d like to say a massive thank you to Buy a Gift for making this possible. I’d booked a Champagne Balloon Flight for two which was available in 37 locations on morning, weekday flights.

You should note that some balloon companies no longer offer the champagne. We were told that someone was stopped by the police following their ride when they were leaving in their car. I’m not sure if they were over the limit but I’d imagine that a glass of champers at 6am on an empty stomach isn’t a great idea if you’re planning to drive afterwards.

Our balloon departed from Whitchurch at Dearnford Lake. I don’t think it really matters where you do it but this was a lovely location because there’s a little garden centre and café next to a lake so it’s great for breakfast after the flight.

What to wear for a hot air balloon ride

It isn’t cold or windy when you go up in the balloon so you can wear whatever you’d wear on the ground. The flames from the burner also keep you warm so don’t worry if it’s a cold day, you won’t freeze when you’re up there! You do need to climb up into the basket so I’d avoid short skirts, short dresses or high heels. You also land in a field which could be muddy so it’s worth taking that into account when planning your outfit.

Are you planning a hot air balloon ride? Pin this for later and add it to your bucket list board!

Blog , UK
Holiday caravans are booming in the UK this year! We’re all looking for affordable staycations and a holiday caravan is one of the cheapest...

UK
After looking at these photos you’d be forgiven for thinking that Portmeirion is a pretty Italian village. But is it…? Portmerion has the quaint...

UK
I’m suffering from the post- Isles of Scilly holiday blues today. It’s a real thing; I checked and other people are suffering too. I’m...