Dorset has always been one of Britain’s most popular holiday hotspots. The county on the south coast of the UK boasts everything from scenic countryside to sandy beaches, fairy tale castles and a famed prehistoric coastline. 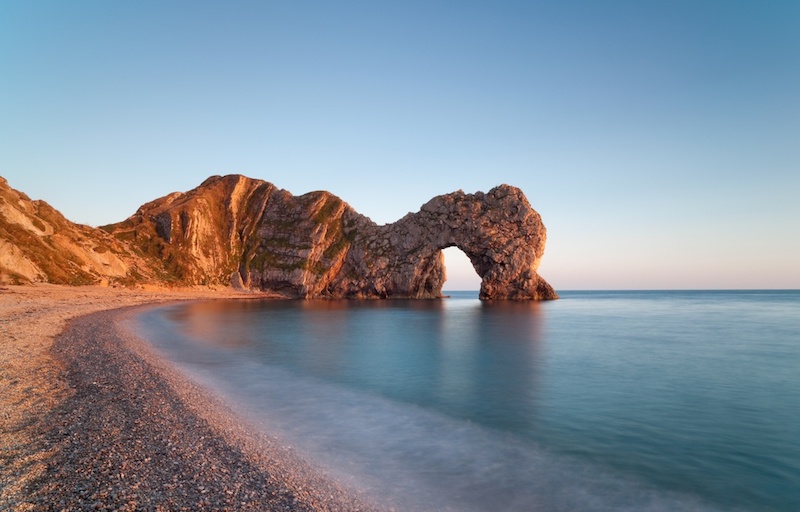 Natural beauty is the headline act in Dorset, particularly around the coast thanks to those steep cliffs, striking rock formations and plenty of long, sandy stretches of beach. The coast might be the star attractions but Dorset is far more than a one-trick pony.

The rolling country hills found inland are dotted with Iron Age forts, stately homes and plenty of quaint and traditional villages. This charm continues in the coastal towns and cities which still cling on to that quintessential British seaside character.

Dorset is the kind of place that will take you back to your childhood holidays but now you’re free to inject a bit more style, luxury and Prosecco into your weekend break 😉

How to get to Dorset

Dorset is easily accessible by air, train, bus, plane or car. Whenever possible I’d recommend driving so you’ve got the freedom and flexibility of your own car once you arrive. Many of you will travel to Dorset by train which is another easy option as there are 23 train stations in Dorset. Use Google Maps to find the train station closest to your accommodation and book your train tickets as far in advance as possible. They’re always cheaper when booked in advance. 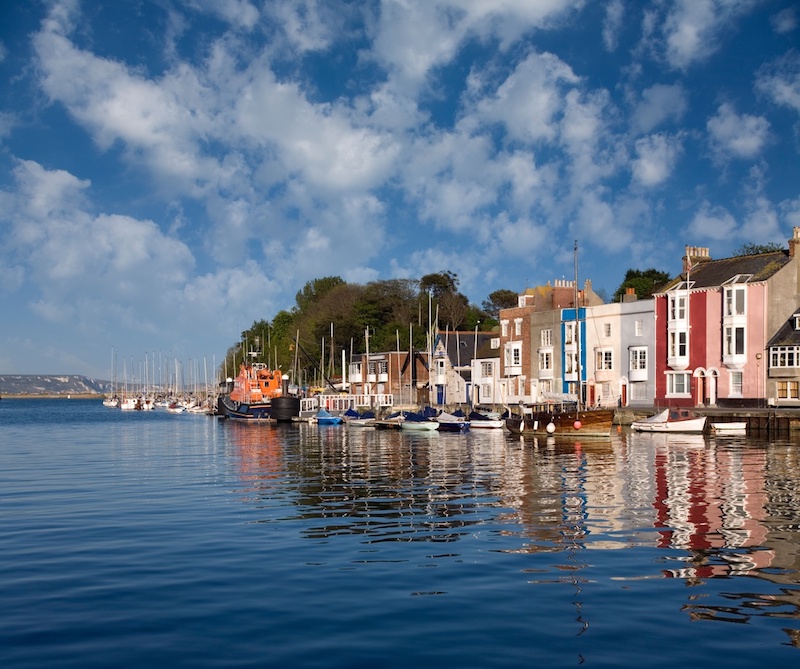 Where to stay in Dorset

As always, I think holiday cottages are the best option for a weekend break in the UK. Enjoy the privacy of your own home from home combined with the luxury of staying somewhere special. Take a look at Wyke Dorset Cottages for some gorgeous options whether you’d like a cosy cottage, a luxury pad or somewhere big enough for the whole family. I’m a little bit in love with this stunning cottage with a lovely orangery.

Top 10 things to do in Dorset

The Jurassic Coast is Britain’s first and only natural World Heritage Site and consists of 95 miles of shoreline and around 200 million years of the planet’s history. Search for belemnites and ammonites (or bigger beasts) during a fossil hunt on the beach at Lyme Regis or learn more about this historic coastline through the interactive displays at Charmouth Heritage Coast Centre.

If it’s a summer weekend, there’s no better place to head than the seaside resort of Bournemouth. The warm weather here makes the beach the perfect place to spend the day and the coastline in and around Bournemouth is home to over seven miles of award-winning sandy beaches. 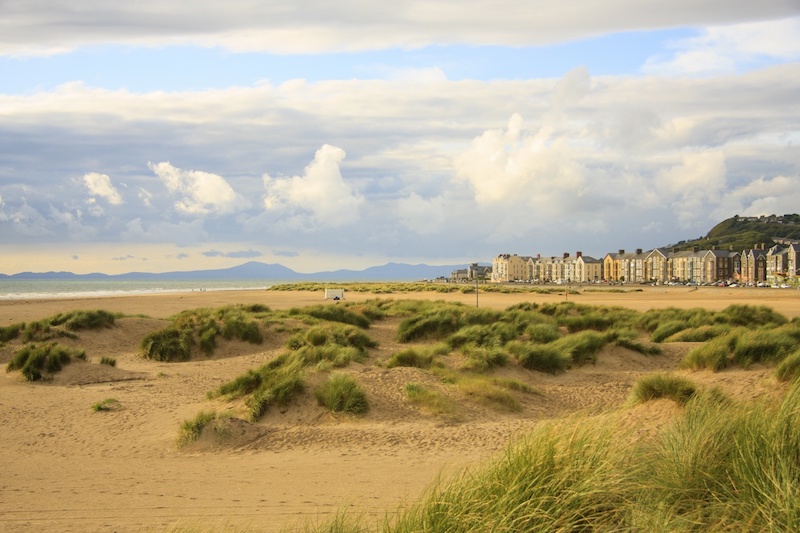 Of all the dramatic coastal scenery enjoyed in Dorset, Durdle Door has to be the most famous location, and certainly the most photographed. Discovered on the Jurassic Coast, just to the west of Lulworth Cove, which incidentally is another beautiful spot for an afternoon paddle in the sunshine, Durdle Door is a natural limestone arch formed by the erosive power of the sea.

From the Punch and Judy show on the sandy beach to the colourful ice cream parlours near the water’s edge, Weymouth has all the ingredients of a quintessential English seaside holiday. One of the best times to visit Weymouth, especially for foodies, is in early July when the harbour hosts the annual Dorset Seafood Festival.

A National Trust site located in Poole Harbour, Brownsea Island is one of the few places in southern England where indigenous red squirrels can be spotted in their natural habitat. There’s plenty of other wildlife too, including several herons and egrets for keen birders. History also plays a role here, as Brownsea Island was the scene of the formation of the worldwide Scout movement back in 1908. 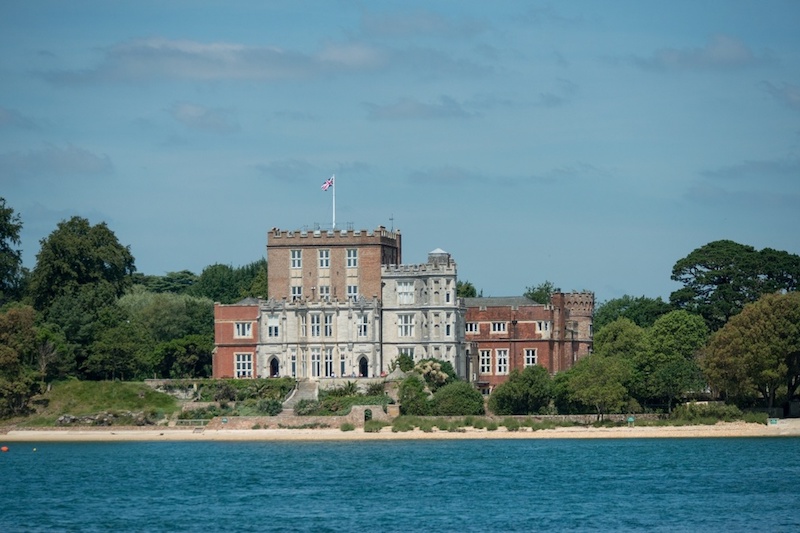 Swanage’s heritage railway line is a wonderfully-restored six-mile line which travels through the Purbeck countryside on a journey into the past. Riding the steam train is a fun day out for families and look out for the dining events that occasionally take place on board for an extra special experience. 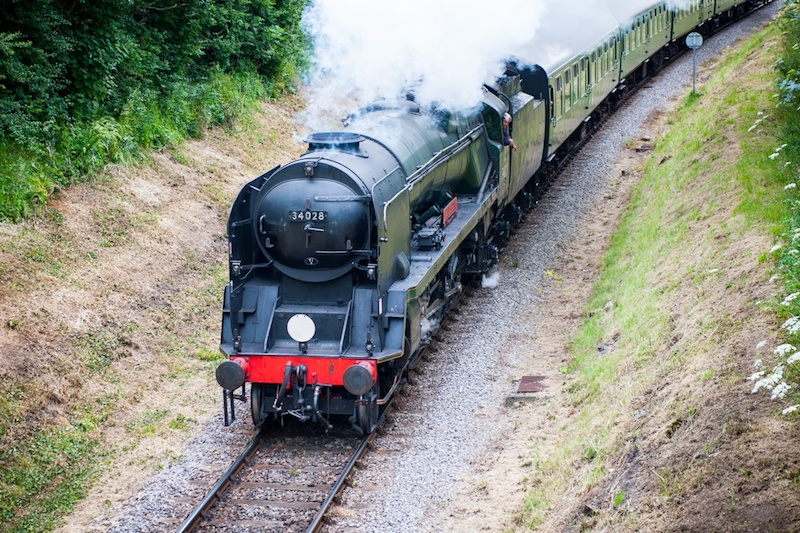 At one end of Swanage’s railway line lies Corfe Castle, towering amongst the Purbeck Hills. Today the castle is owned by the National Trust, but originally dates back to the 11th century and was built by William the Conqueror. A stroll through the remains and rubble effortlessly brings the story of the castle to life. Learn more about the castle’s history during the summer period when several demonstrations and re-enactments take place. 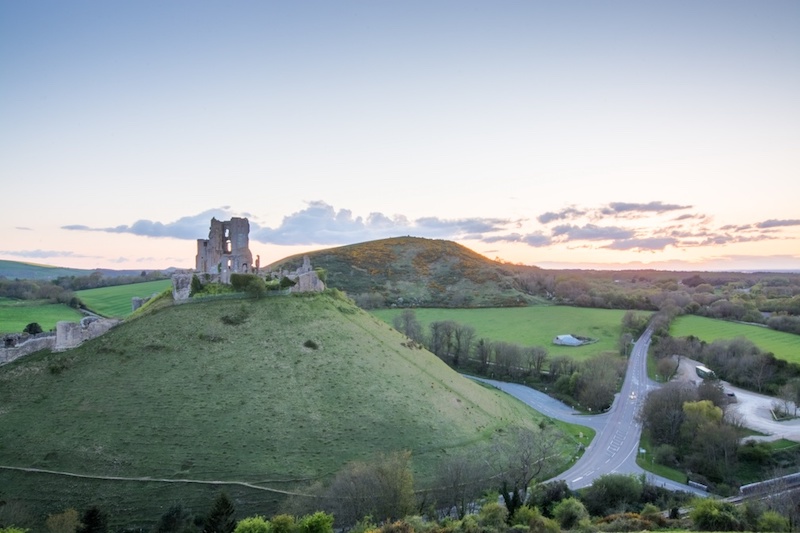 Dorset’s county town provides a convenient base for exploring various surrounding attractions and locations, but Dorchester itself shouldn’t be overlooked. The historic market town lives up to its name each Wednesday when the lively market day kicks into action. It is also worth taking the two-mile walk to see Maiden Castle – an amazing Iron Age hill fort.

Arguably one of the most rewarding trails in Dorset; ascending to the 191 metre summit of Golden Cap will see you standing atop the highest point on the south coast, admiring one of the coastline’s most breath-taking views.

This country house, near to Wimborne Minster, is another of the National Trust’s properties, and is perhaps most famous for its gardens. The land surrounding Kingston Lacy has been listed in the Register of Historic Parks and Gardens, comprising around 390 acres, with the Japanese Garden and Kitchen Garden among the most beautiful spots. 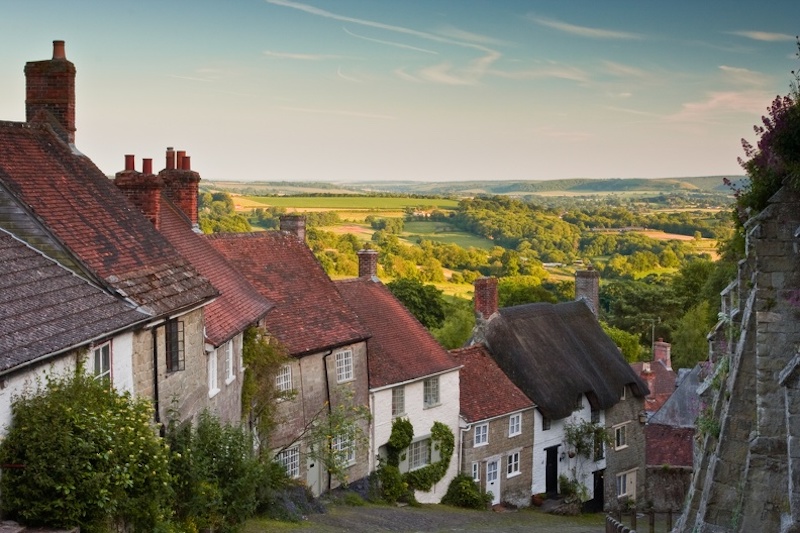 Bonus thing to do: Visit Gold Hill in Shaftesbury, a steep cobbled street made famous by the Hovis advert!

Off the beaten track in Dorset

Dorset seems to be the unofficial home of quirky and niche museums such as The Tank Museum in Bovington. This museum is home to the world’s best collection of tanks and explosive live displays. Dorchester, perhaps Dorset’s capital of unique museums, boasts The Teddy Bear Museum and the family-fun Dinosaur Museum.

Another unique experience found off the beaten track is Monkey World in Wareham, a 65-acre ape rescue centre which provides a sanctuary for some of the world’s endangered primates. This is a great place for young families, with excellent educational displays and tours sure to inspire the children, unless they find the huge Great Ape Adventure Play Area first!

For more ideas about things to do in Dorset, make sure you check out Dorset Travel Guide! 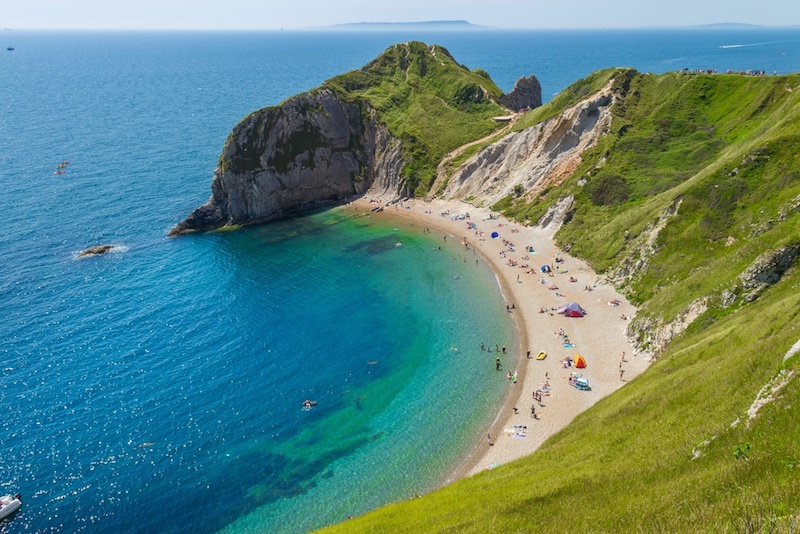 Where to eat and drink in Dorset

Food is a big part of Dorset’s identity, particularly around the coast where the countless harbours are abuzz with fishing boats. You’ll discover some delicious seafood across the county, from the classic newspaper full of fish and chips on the seafront in Bournemouth, to classier seafood restaurants in the likes of Swanage and Bridport.

If it is fresh seafood in a scenic environment you’re after, look no further than the Hive Beach Café in Burton Bradstock. Serving up the catch of the day, amongst various other meals, amid the beautiful coastal setting of Burton Bradstock, this is the place to go for a taste of the sea.

It isn’t all fresh fish, meaty crab and salty mussels; Dorset can do modern, Western cuisine too. One of the most talked about eateries of this description can be found in Weymouth in the shape of The Dorset Burger Company. Rivalling the likes of London and New York when it comes to gourmet burgers, this award-winning restaurant is all about hearty and creative burgers made with locally-sourced produce.

The Square and Compass is located just outside Swanage in a village called Worth Matravers and is renowned amongst coastal path walkers for its local beer and cider. The Anchor Inn in Burton Bradstock is another wonderful pub and restaurant providing sustenance after a long walk along the Jurassic Coast. 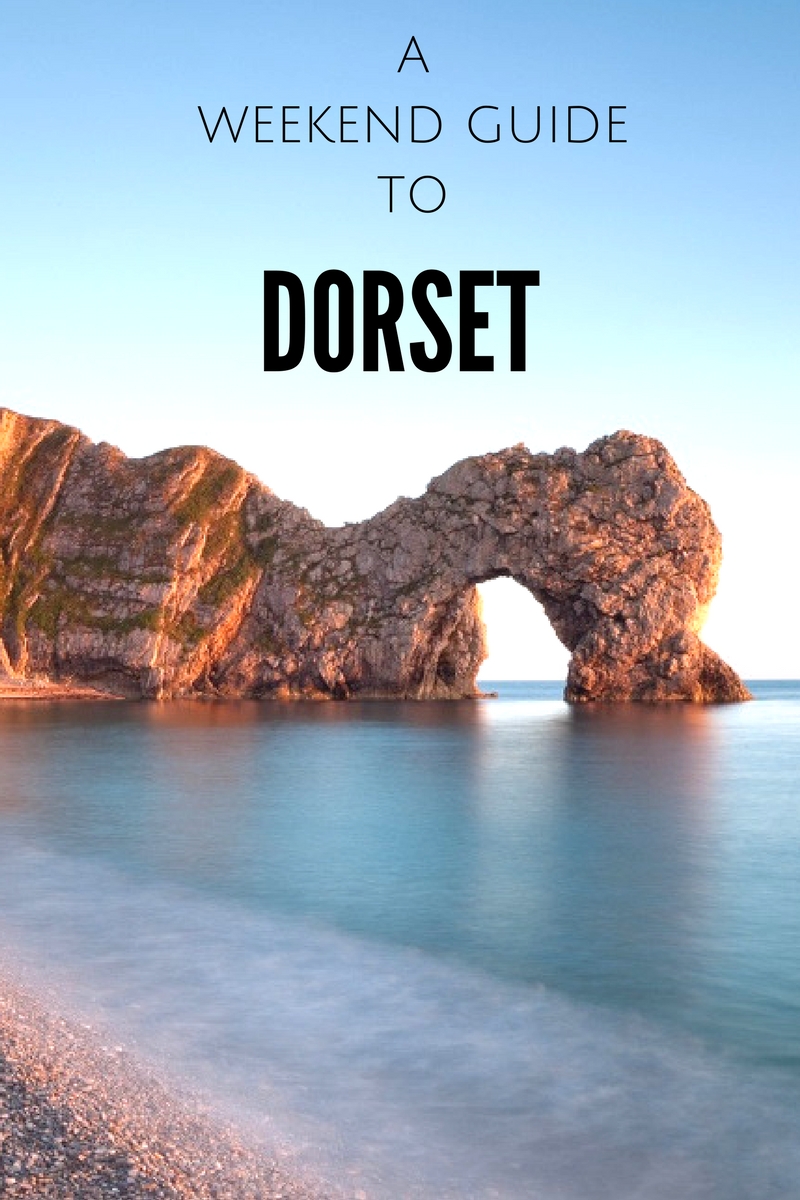 The traffic driving from London to Dorset got so bad that we gave up *sigh* I'm so sad that I've missed out on that beautiful view!

Wow this looks beautiful! And so diverse!