If you’re on the heaven side of the camp you’ll be thinking about the freedom to go wherever you want, whenever you want. You’ll be imagining camping on beaches and gathering around a campfire while drinking beers under the stars.

If living in a campervan would be your idea of hell then you’re probably thinking of the cramped spaces, having to make a bathroom out of a bush and the many, many hours driving. And when The Boy and I drove around Australia in our campervan, there was A LOT of driving! You can check out our Australia road trip itinerary here.

Living in a campervan was by far the best experience of my life but there were times when it wasn’t easy. After a whole year of it, my boyfriend and I came up with a few tips to make it easier:

To say there was very little room inside the campervan is the understatement of the century. I’ve always wanted to live with just the clothes on my back but if you do that in the real world, well, you’d be a tramp. Backpacking is probably the only exception.

For the final few months of our time on the road I had:

Make friends with someone who has a better van than you 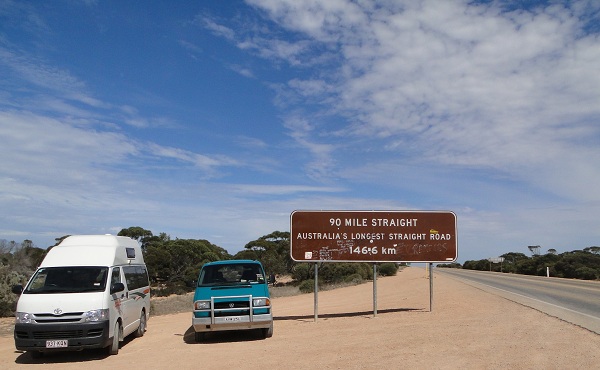 It doesn’t matter how good your campervan is, there’s always someone with a bigger and better one. Our van was a battered old VW with a mattress and a cupboard so it wasn’t difficult for us to find friends who met this criteria. People generally stick to similar routes when they’re backpacking so it’s easy enough to stick together.

We made friends with a group of guys who had that luxury item all backpackers want – a fridge. And what does a fridge mean? Cold beer. It was a very good friendship choice.

What to do when it rains

Living in a campervan leads to a very outdoorsy lifestyle because it’s not like you can kickback in the living room to play computer games (unless you’re in one of those fancy pants campers like on Meet the Fockers). When it rains you’re left with very few options that don’t involve spending a fortune.

Of course you can go to a shopping mall, out for food, the cinema or bowling but this isn’t good for a backpacker’s budget.

We eventually came up with a weird but entertaining solution – go to the pet store.

In the US and Australia, pet stores aren’t like the ones in the UK that just have food and fish, these ones have kittens and puppies! Yes, you look like a complete weirdo (especially when you’re travelling with four guys in their late 20’s) but, you have to admit, it’s a great way to spend a rainy afternoon without spending a penny. 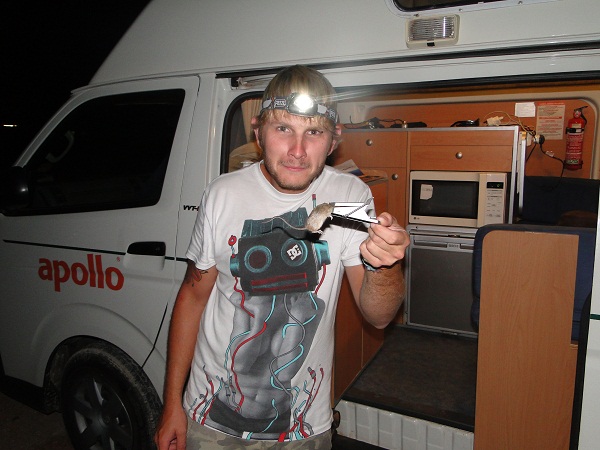 We learnt this lesson the hard way and had a little mouse join us for part of the journey. I dread to think how long I was sharing my muesli with Stuart Little. We spent a few nights listening to him scurry around the roof space of the van before we finally caught him (and then realised how small and cute he was and felt terrible!)

We bought our campervan based on the fact it had ‘Icy Cold Air-Con’ and when I say icy cold, I actually mean arctic standards that could lead to frost bite. It was delightful!

The only problem was than you could see the fuel gauge drop when the A/C was switched on. We had a few weeks when we were driving to a new job but had so little money that we had to turn it off and drive with wet towels hanging from the windows and around our necks. I honestly thought I was going to melt.

Stay in campsites whenever possible

The thought of camping on the beach is all very romantic and it’s great for one or two nights a week but it won’t be long before you miss toilets, hot showers, cooking facilities and the company of other people.

One the west coast of Australia it was easy to go days without seeing anyone except in petrol stations so it’s good to get to a campsite where can chat to the locals and other travellers going in the opposite direction for some advice and insider’s tips.

Having a bit of company from other people also stops you wanting to murder each. Which leads me nicely to my next point.

If you’re driving around Australia in your campervan, don’t stop at Wolf Creek 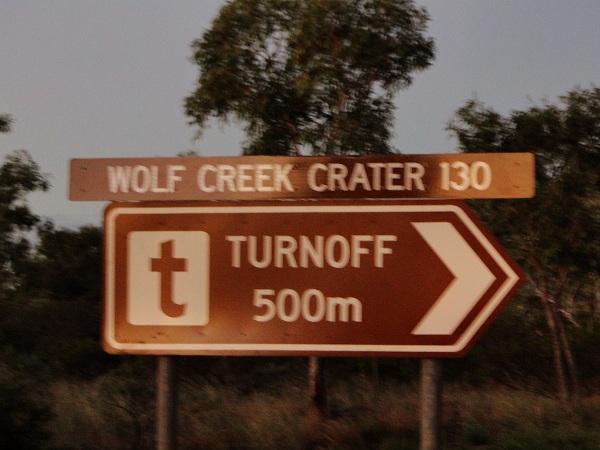 We drove past Wolf Creek but were total scardy cats and didn’t eeven stop to take a photo. Here’s a blurry one I managed to take out of the window.

Laugh at the bad times

It’s really important to laugh at the bad times because, although there weren’t many, there were some.

There was a time when we camped in the middle of nowhere and locked ourselves in the van because we were sure there was a murderer outside. I was too scared to go out and pee so that was a VERY long night. 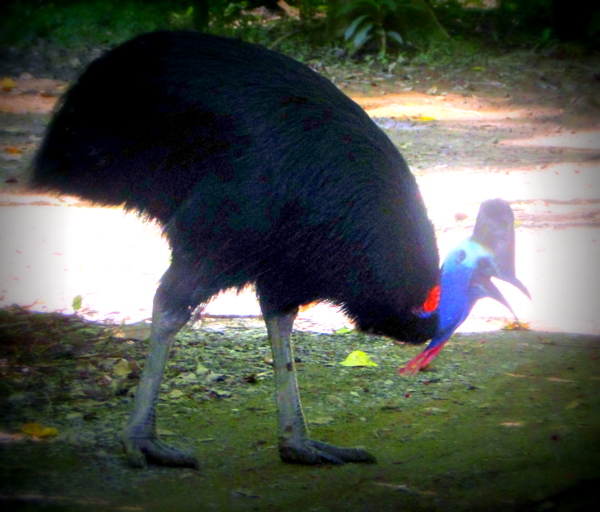 There was a time when a Cassowary Bird and it’s baby appeared out of nowhere and scared me so much that I dropped a cool box full of beer.  It turns out the kasawari is endangered and extremely rare but we spent the next 6 months cursing ‘that stupid big bird with the blue head’, not realising how lucky we were to see it at all.

There was a time we camped under an apple tree (lovely shady spot) but didn’t get a wink of sleep as apples dropped on the van all night. We thought it was local hooligans throwing stones and spent the night devising a plan to get rid of them.

There were many mornings waking up in a stiflingly hot campervan with a hangover from hell and feeling as though the world was about to end because there was no escape from the heat. 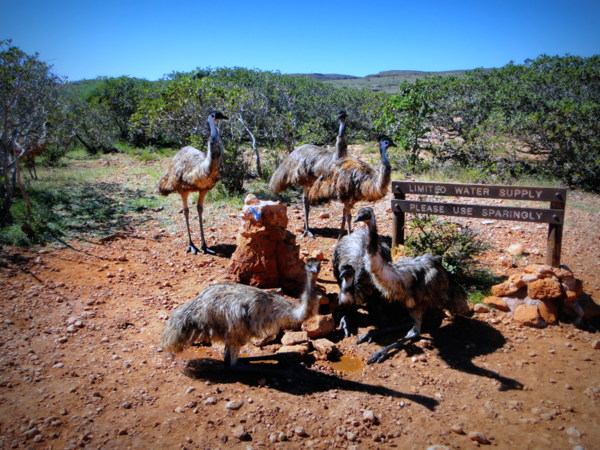 There was a time we got attacked by emus as we tried to get water from a tap in Cape Range National Park. Every time we got the tap running, more and more emus came bounding over to get some water of their own. We were so thirsty!

There was time I was using a solar shower, feeling all at one with nature as it hung from the branch of a tree. Unfortunately the branch snapped and the shower full of water nearly knocked me out.

There were the many nights of disrupted sleep when the dreaded words were whispered through the dark: “I think there’s a spider in the van.” The van would be emptied and torches would be shone in every nook and cranny until we were sure we were safe.

And then there were the many speeding fines, parking fines, crossing the bridge fines, toll road fines, fines for not paying fines and the arguments that followed about who was driving when the fines were issued.

Little tip: If you want to avoid getting fines in Australia, don’t buy a great big, bright green campervan. I think the fact that it stuck out like a sore thumb drew attention to it and led to even more fines.

But even as I’m writing this I can’t help but laugh. I think I’ll still be laughing at some of the stupid things that happened when I’m in my 80’s and I’ll know that it was all worth it and that it was the best year of my life.

If you’re thinking about buying a vehicle in Australia, make sure you check out my mini guide to buying a car or campervan in Australia.

I think a lot of people are starting to take this route, at least for extreme adventurers. I currently don't have a van living in Bali, but I will do some type of conversion van when go to work in US. Not only that, but I have a friend in Cali that converts diesel ambulances equipped with solar, shower, toilet, running water, queen mattress, and all the amenities of home. Seems like the way to go during times like this, and you can pick whatever view you desire on a daily basis.

Exactly. It's the dream! Especially in warm climates!

I'm about to go to Byron with the hubby in a motorhome. Not long-term like you, just a short tripe, but I hope I can survive with three kids under three :)

I saw Cassawory bird for the first time in my life. Lucky you. I am renting an RV for my fall trip I hope to find them too.

My husband and I are planning to rent a 2 person campervan. We wondered if in November (6-14) the heat is tolerable in the campervan. Any feedback would be great!!!

Oh yes, you'll be fine! Just make sure you have aircon (which I'm sure all rentals will come with) and it'll be great. We were a bit mean about using fans and aircon because we were there for so long and on such a tight budget but if we were on a 1 week holiday we'd be blasting it 24/7!

Grey Nomad Down Under

I am living in a campervan since half a year now Down Under. Sometimes it is quite challenging (especially close to the big cities) but I enjoy the freedom! I am trying now to change from a grey nomad to a grey digital nomad (blog: www.becomethephoenix.com). I think Australia is a good spot to start.