In January 2018 I did something new. I joined a running club.

It wasn’t anything official, just myself and some mums I’d met at a local baby and toddler group and I surprised myself by absolutely loving it.

It was a combination of the fresh air, the post-exercise endorphin rush and the social aspect of running that gave me something to look forward to every Monday.

But, I’m sure it’ll come as no surprise that, by Mid-February myself and the other runners had given up and we still joke about our failed attempt at the running club. In all fairness, we’re all mums with full time jobs so we were all pretty busy, but I’m sure we’re not the only ones who began the year with great exercising intentions that fizzled out like melting snowflakes.

But now, one year later, I can’t help but wonder where I’d be if I’d stuck at it. A whole year of running once or twice a week, surely I’d be fitter and healthier?

It was just one or two hours out of my week so why didn’t I just stick at it? I enjoyed it and it was good for me, surely that’s the kind of thing I should be jumping to do everyday?

But I didn’t and here I am a year later and nothing has changed.

Imagine if everyone who set themselves a New Year’s resolution stuck to it.

What if we all actually did them for a full year?

Where would we all be?

What could we all be doing if we picked our thing and just did it. No excuses, no backing out, no picking a new ‘thing’, just sticking at it.

New Year’s Resolutions not your thing?

I’m seeing so much online this New Year about being happy with who you are and not needing the New Year as an excuse to change yourself. The messaging that you’re perfect just as you are and you don’t need to change anything because it’s a new calendar year is all over my Instagram feed.

And yes, I 100% agree with this message. If you’re happy as you are then high fives to you! Do not let all the marketing spiel make you feel like you need to do any more or be any different.

But, meh, that’s not me. (And let’s be honest, it’s not the people who are 100% happy with themselves who get angry about these marketing messages.)

I love using the New Year as an excuse to start a fresh with a new boost of energy and motivation and I love setting myself goals to achieve more.

There were years when I knew I was doing as much as I possibly could. Two years ago I had a newborn baby and an 18-month-old toddler and I was squeezing in bits of work between naps. That was 2017 and that was a tough year! I definitely did not set myself any ambitious goals or resolutions that year. In 2017 I was simply happy to get through the day without any mentions of jogging or healthy eating or ambitious new hobbies or projects. Getting through the day in one piece was enough of an achievement.

But this year feels different. Joseph is two and George is almost four and they’re so much easier. George is in pre-school full time and Joseph is a typical second child and will entertain himself for hours – leaving me with a lot more time on my hands than I had two years ago.

I’m setting myself a lot of goals this year for work, my personal life and my personal development and I’m really excited to see where the year takes me! 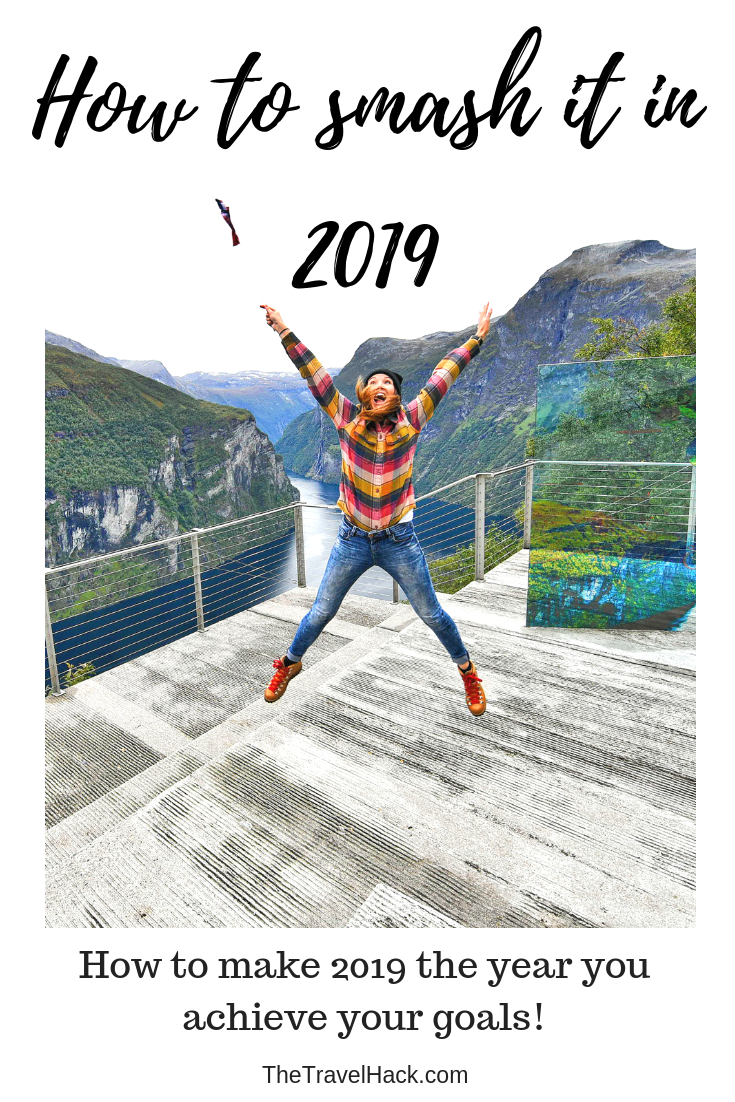 There’s no point trying to change everything all at once because you’re just setting yourself up for overwhelm and failure. Focus on one thing and aim to do it really well and you’re much more likely to stick with it.

If you’re anything like me and you’re the kind of person who likes to do ALL THE THINGS, then check out my blog post about setting myself a mini challenge every month for the year: 12 months of challenges These are 12 traditional New Year’s resolutions but I’m spreading them out over the year to do one per month. I’m hoping at the end of the year I’ll have found 2-3 I really enjoy and feel like I can stick with.

I’ve decided to start with ‘No TV’ in January to avoid that 2-3 hour waste of time I have almost every evening. It’s quite an easy one to start with but I think it’ll be really effective!

Set yourself achievable targets and goals

In my last corporate job, the phrase, ‘What does success look like?’ was often thrown around and I’d roll my eyes at the corporateness of it. I’m surprised they didn’t have an acronym for it. WDSLL?

But in all seriousness, knowing what success looks like before you begin is the only way to know if you’ve achieved something, particularly if it’s something that doesn’t have an end goal or date.

Let’s say your goal is to start running, you can’t just say, ‘I want to run’, because running once a year is running. You need to be specific.

You need to say something like, ‘I want to run twice a week for 30 minutes and increase the distance every week and by the end of the year I want to run a marathon.’

There actually is an acronym for this – SMART goals. This means your goals have to be:

OK, I’ll stop being all nobby and corporate now.

Set yourself dates and mark them on the calendar

Whatever it is you’re trying to achieve, break it down into smaller chunks and mark it on the calendar for when you would have liked to achieve them. If you’re a blogger for example and you want to increase your readership, set yourself a goal for each month and put these on your calendar. Track them and monitor them each month and if you don’t hit your targets you know you need to change your strategy and rethink things so you still have time to achieve your end goal.

(PS. If blogging is a goal for 2019, check out my e-course The Blogger Course)

Think about the bigger picture

When you’re knee-deep in day-to-day life it can be hard to see the bigger picture and release those tiny things you’re doing are making a huge difference.

Going for a 1 hour run twice a week didn’t feel like it was doing much but if I’d done that twice a week for a year, I’d be running a half marathon by now. And that’s a big deal!

I know this sounds like a fluffy piece of advice but, seriously, I love a good Pinterest board for inspiration. If you’re a Pinterest fan, you can find me over here. I’m a bit of an addict!

Imagine if you stuck with your goal for a whole year and how you’d feel at the end of December 2019. Try not to think about how you feel right now, think about how proud you’ll feel in 12 months.

Right now, you probably don’t want to put your trainers on and go for a run (or whatever your goal is). Or you might start with lots of enthusiasm but in 6 months it might start to drain. This is when you need to stop thinking about your feelings right now and think about the future. I don’t want to be too cheesy but do it for your future self.

Stop making excuses. Yes, you know that reason you said you couldn’t do it? It’s not a reason, it’s an excuse. Don’t try to pretend it’s anything but an excuse.

At the risk of sounding like Nike advert, just do it.

Do a new thing every month

Bringing it back to my resolutions for the year, why not try what I’m doing this year. Rather than having a New Years resolution, I’ll have a new months resolution each month. I feel like this will give me something new to focus on every month, keep me on track and stop me getting bored!

A year feels like such a long time when we’re just a few days into it, but a year is nothing. Just 52 short little weeks that fly by before we know it and we’ll be sat here talking about 2020 and wondering what happened to 2019 while quietly wishing we’d stuck to our 2019 resolutions because if we had, imagine where we’d be now….

I'm not good with the just do one thing either. I just made myself a grown up sticker chart with things like 'eat better', 'exercise' and 'write' getting me pretty magnets every day. It's having some success, so I guess it's better than I was doing last year!

Really nice post. You're totally right - if you break your goals down and you can 100% make them more achievable. For me, a constant battle is doing enough exercise, so I have a calendar next to my front door, which I only use to track workouts I've done. It's really really satisfying seeing the month fill in as it goes on, and a good visual reminder to do more if it's looking emptier than it should. But the best thing is that you get a blank canvas every month so if you have a naff April, you still have a fresh start in May, which I find really motivating.

So pleased to hear someone else who loves setting goals. I've seen so much on social media about how bad it is etc. but I love giving myself a new focus and making myself better. I've been looking at level 10 life to help me set my goals this year as it focuses on different areas of my life.

I'll have to check that out, sounds like my kind of thing. And I felt the same, I felt really disappointed to see so many people making out like setting goals and resolutions is a bad thing because we're all meant to be happy with who we are.

Finally, finally, I've read a smart post about goals. Thank you. I don't know why I torture myself reading posts and articles which purport to advise on how to do this or that when they tell the reader nothing specific, not how to set a goal, or even more importantly how to tell if you've achieved it. That "smart" goal stuff is what we used to teach to high school students back when I was still teaching. Goal setting is such an important life skill once you've internalized how to do it. Now there I go getting all "nobby" and pedantic... like an old teacher. Ha. P.S. Really enjoy reading your blog, by the way.

Hi Sue, thank you so much, I'm so pleased you're enjoying the blog! I was a bit cautious about writing this one because there's so much fluff at this time of year about resolutions but also so much silly advice. I saw one post that was all about 'challenging' your friends to lose weight by sending them a list of things they can't eat in the new year. I think I'd have to slap someone if they sent me that post!