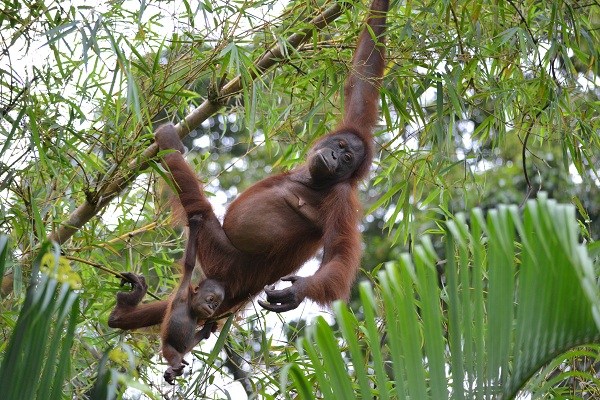 Borneo and Sumatra are the only places in the world that still have Orang-utans, a name which means Man of the Forest in Malay, so getting to see them in the wild was an unforgettable experience.

We visited the Sepilok Orang-utan Rehabilitation Centre in Borneo. The centre is a great example of active conservation as they re-introduce domesticated, injured and orphaned orang-utans back into the wild.

In this rehab centre they take the orang-utans from where they are in danger, such as in farmer’s crops or where people have captured them to keep them as pets. If they are healthy they are released back into a safe area of the forest but if they’re unhealthy or can’t fend for themselves, they are kept at the centre until they are ready to be released.

The centre has developed special ‘half way’ areas which are platforms in the forest where they are fed. One of the orang-utan’s old keepers will go to a platform every day at a certain time with bananas and milk. The keepers also offer the emotional support the orange-tans crave which is something they come to rely on while they are in captivity. 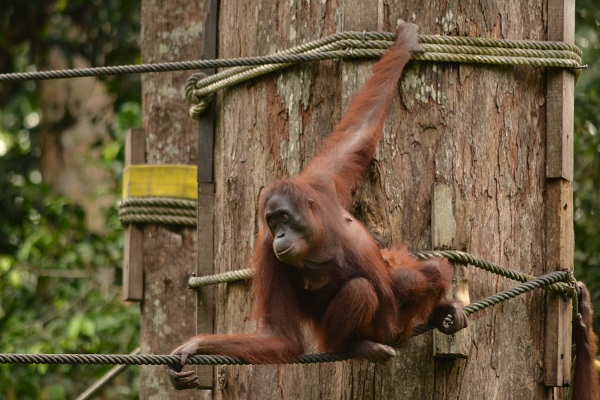 The halfway platforms are available for the orang-utans when they are initially released while they are still learning to search for their own food. The keepers only offer bananas to make sure the orang-utans don’t starve but at the same time they start to get bored with the same menu option and start exploring the forest for different things to eat. Eventually they won’t need to return to the feeding platforms and will be entirely self-sufficient.

The centre also educates local people and school children about the orang-utans to help ensure their safety in the future.

When we arrived we watched an educational video and then went to a viewing area near the first platform to watch the orang-utans arrive in time for their meal. There was a boardwalk leading to the viewing area where one orang-utan and her baby were sat. They were just chilling in the forest before lunch time and they looked relaxed and happy and led the way to the feeding platform as we followed in silent disbelief.

There were two female orang-utans with babies clinging to their chests at the feeding platform. Some people were disappointed we didn’t see more but we were told that the fewer orang-utans we saw the better. It means they’re providing for themselves and the rehabilitation programme is working. 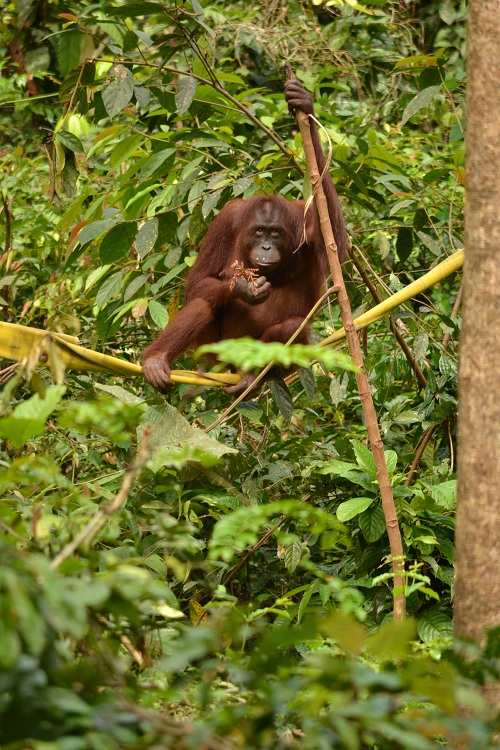 The two orang-utans sat patiently at the feet of the keeper who arrived with a bucket of bananas. It was amazing to watch them as they sat in such a human way and peeled bananas for themselves and their hungry babies.

It wasn’t long before about 30 Macquarie monkeys arrived in a daunting pack. They strutted along the boardwalk in unison like a mob and were unfazed by the tourists and their cameras. They swung through the trees and up to the viewing platform where the keeper and the orang-utans swatted them away like pesky flies.

Orang-utans are solitary animals and spend the majority of their time alone or with their young so once they had finished their lunch they swung off and disappeared into the forest in opposite directions with their babies hugging their chests. This was strange to see because the way that sat together and shared their food seemed so human that I half expected them to stay together like a little human family but this was the realisation I needed to see that they are wild animals and need to be treated like they are.

The small crowd was left in awe for about half an hour after the orang-utans had swung away. It was as though no one wanted to speak and break the magical atmosphere that bonded a group of international strangers together. I think we were all hoping they would come back and we were now disappointed by the cheeky Macquarie monkeys who flaunted themselves for our attention. An hour before and I would have loved to be surrounded by these monkeys but nothing will ever compare to seeing orang-utans.

The national language of Malaysia is the Malay language. You would call the people there Malaysians. I visited a few years back.

Thanks for the correction.

It's great to hear that they have such support in the form of the Rehab Centre. I bet that was a great experience to see them in their natural habitat.

This brought back memories when I was there a few years ago! It's such a fascinating place! Did you also see the Proboscis moneys whilst you were in Saba? Because they truly are a sight to behold!

Naw, these guys are cuties! I do think that seeing how far these guys would have come in their rehabilitation would be well worth it =)

Wow I had totally forgotten the name of this place but I've been there before! I went on a whirlwind two week school trip with my Indonesian class. Totally amazing and I'm so glad to see that the centre is still continuing its great work. I'll have to get back there soon!!