It was difficult enough to find the words to describe my 7-day Silversea cruise. It’s almost impossible to find words that describe my first shore excursion and one day in Florence.

You see, this is a city that can’t be captured completely and perfectly and forever in language or pictures. It’s richer than expression; it’s more complex than art; it’s an ever-changing cradle of beauty, culture, and history.

Every time you visit, each layer of this Renaissance city reveals itself in fresh, new and breath-taking ways.

For me, seeing the Duomo rising by the marble-clad baptistery in the gentle November light of this trip, instead of under the summer sun of my last, was like seeing Florence anew; through washed eyes.

Which begs the question: if, like I did, you just have one day in Florence on a shore excursion from the Tuscan port of Livorno, how can you make the most of it? What should and shouldn’t you do? 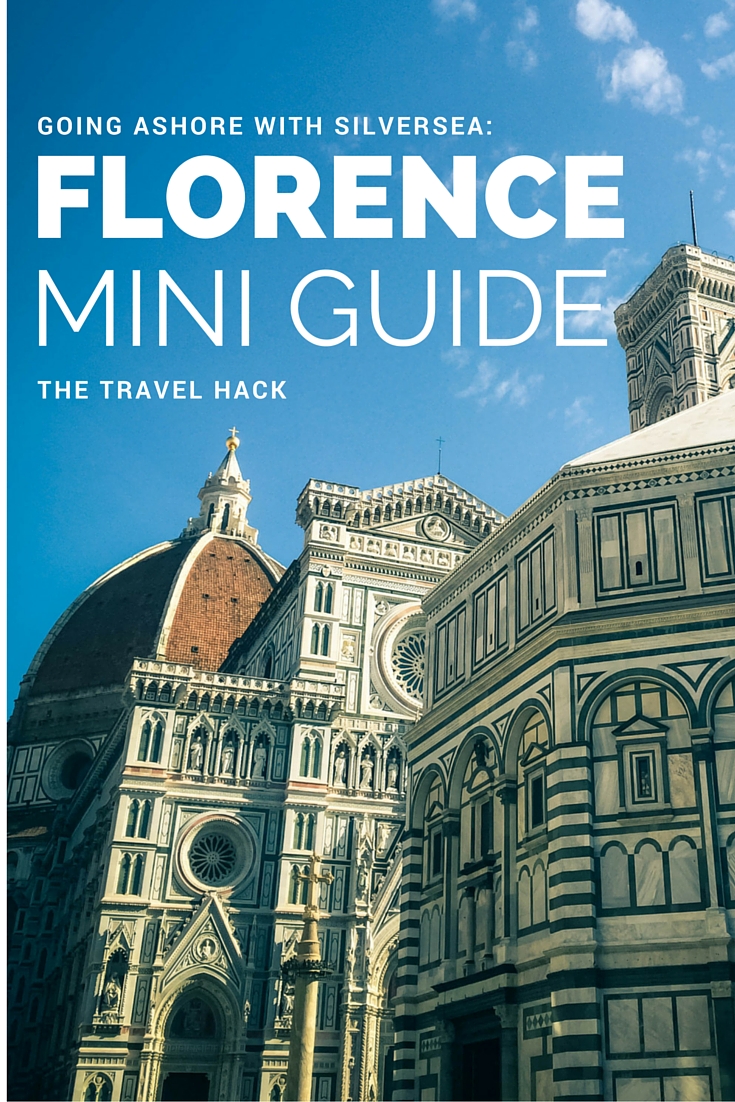 Disembark from your Silversea cruise at Livorno – one of the most popular cruise ports in the western Mediterranean and gateway to Florence and Pisa. Silversea offer a number of excursions into Florence, but they can be pricey.

Instead, we opted for the DIY version: we took a return taxi from Livorno pier for €55 each – there were 5 of us. The taxi driver spoke English, was very helpful, and the 90min journey didn’t feel that long.

Alternatively, you could get the train into the city from Livorno Centrale. It’s the cheapest option but not the fastest: a minimum of 100mins. Also bear in mind, the station is not really walkable from the cruise terminus.

What’s more, you might need a taxi back to the station in Florence, especially if you’ve a boarding deadline to hit. 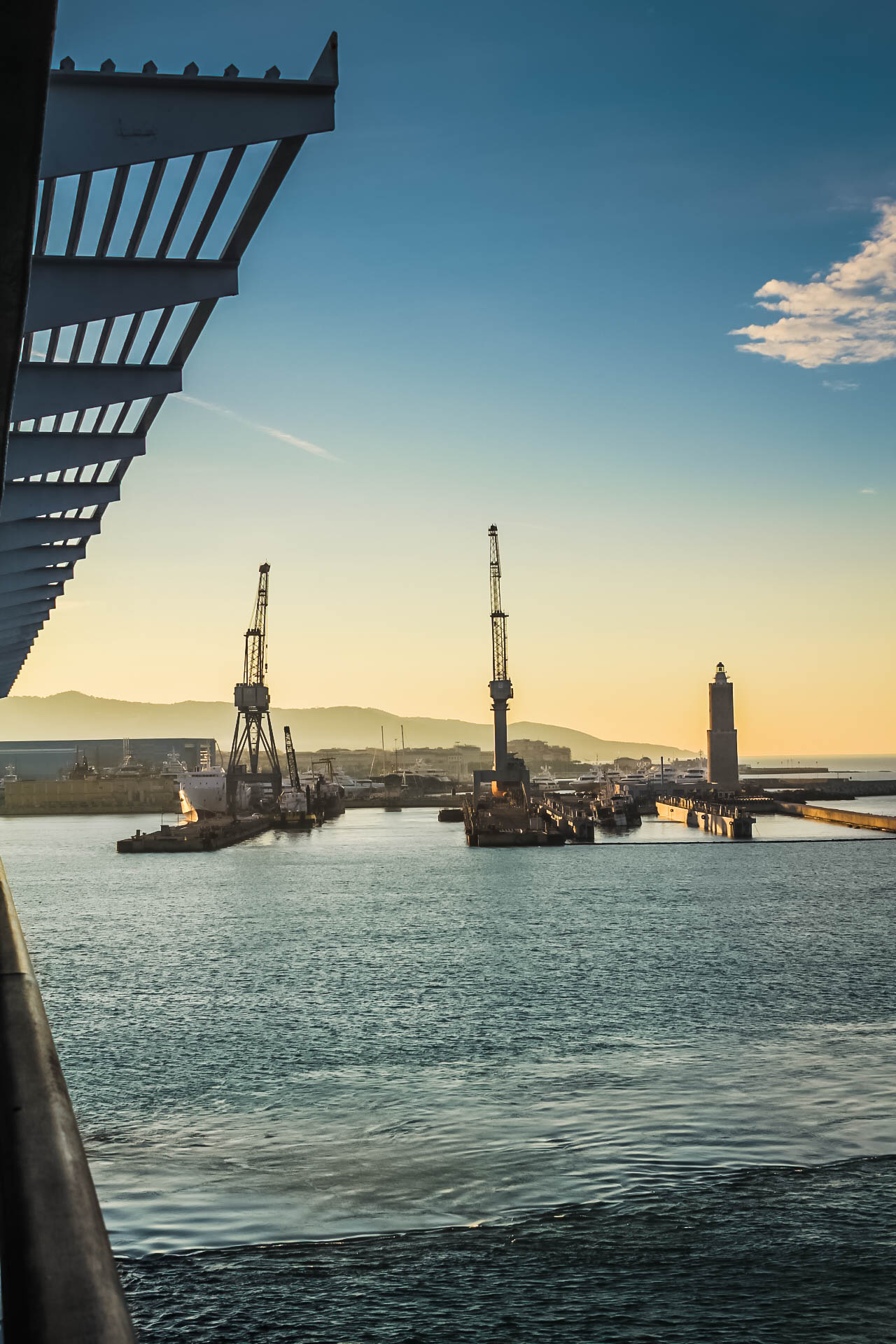 Arriving in the Tuscan port of Livorno 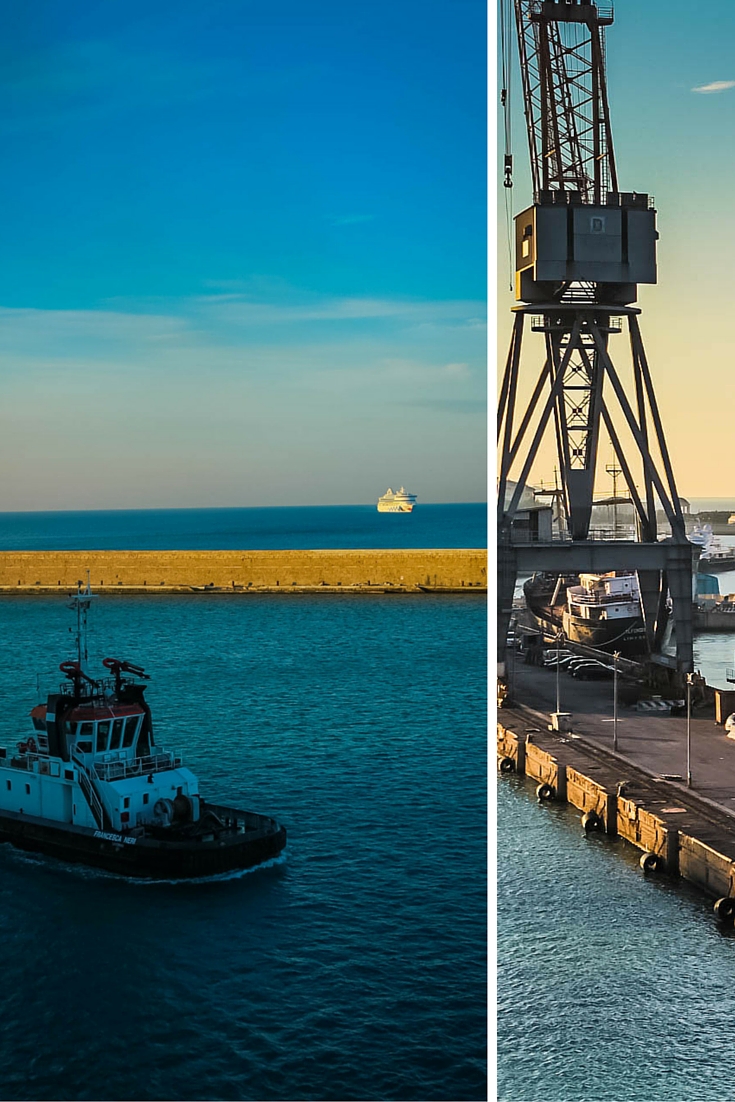 See this: The top sight to see with one day in Florence

If your heart doesn’t leap from your chest at the sight of Florence’s most iconic landmark, Il Duomo, then check your pulse.

This vast gothic building stretches 140 metres into the sky; its outer coat a layered of green, white and pink marble, pocketed with frescos and statues. And on its head, like a terracotta mitre, a magnificent dome designed by Filippo Brunelleschi.

Inside, the church echoes with a thousand voiceless ghosts who’ve passed under its stain-glasses: Cosimo de’ Medici, Brunelleschi and Girolamo Savonarola – the famous ‘fire and brimstone’ Florentine preacher, whose religious austerity is reflected in the relative baroness of the Duomo’s interior – in stark contrast to its outer.

Feeling energetic? Then climb the 436 steps to the top of Brunelleschi’s cupola (tickets cost €8). The 360° view over Florence is well worth the hike, but be warned: the stairs take you between the inner and outer shell of the cupola, and it gets very claustrophobic in parts. 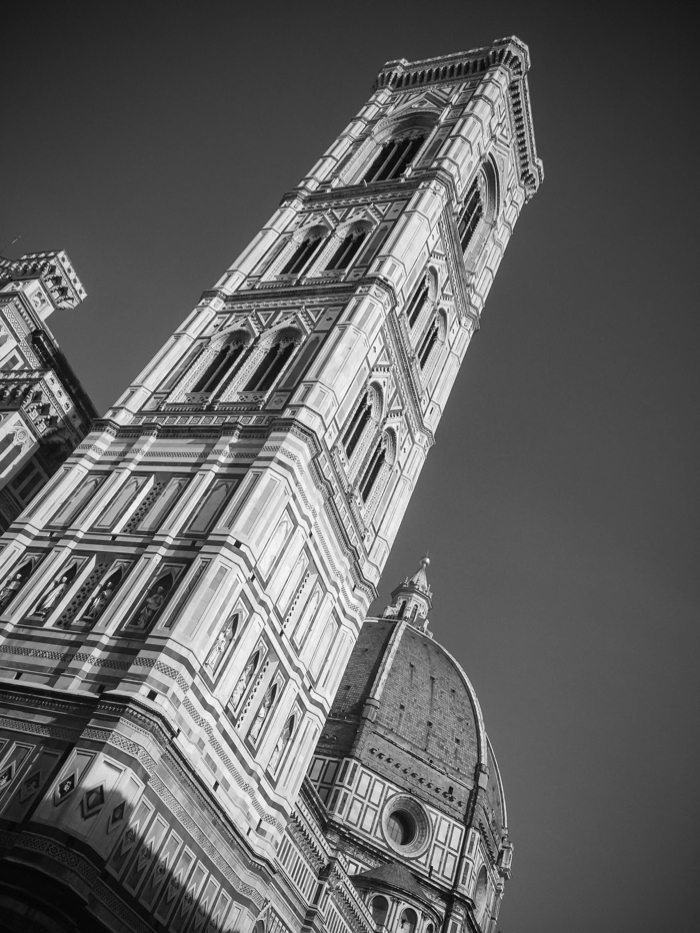 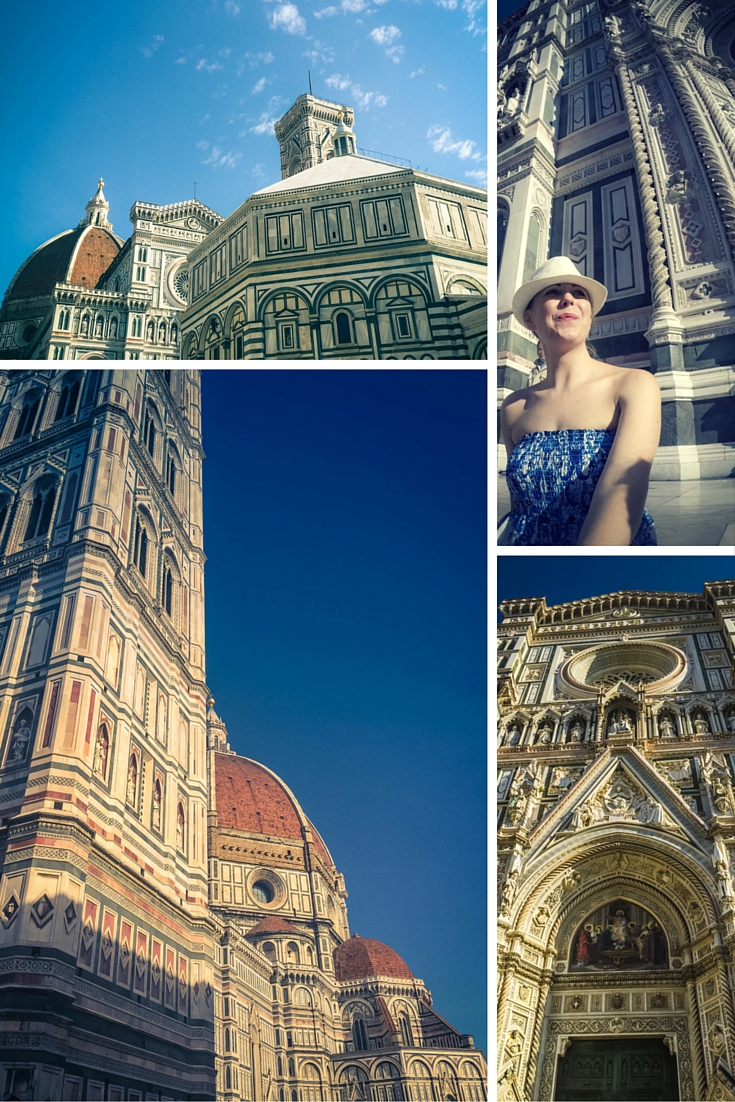 Delight in the simple Tuscan pleasure of a fiaschetterie – wine tavern – by heading to I Due Fratellini on the Via dei Cimatori, between the Piazza Della Repubblica and Piazza Della Signoria (you’ll spot it by the pockets of people gathered around its diminutive frontage).

More ‘hole-in-the-wall’ than tavern, this popular lunch-spot serves a frugal but sensational sandwich. It’s stuffed with fresh Tuscan ingredients for the equally sensational fixed price of €3, and made on the spot by the two brothers who own it.

Expect roast pork and truffle crème, soft goats cheese with Tuscan salami and fennel, herring and parsley sauce, plus 26 other choice fillings all piled into the softest ‘panino’ imaginable.

Splash some chianti in your glass and the bill rises by just €2.50. It’s food done fast and eaten in the street, because there’s no-where to sit.

But the experience is without doubt: bellissimo! 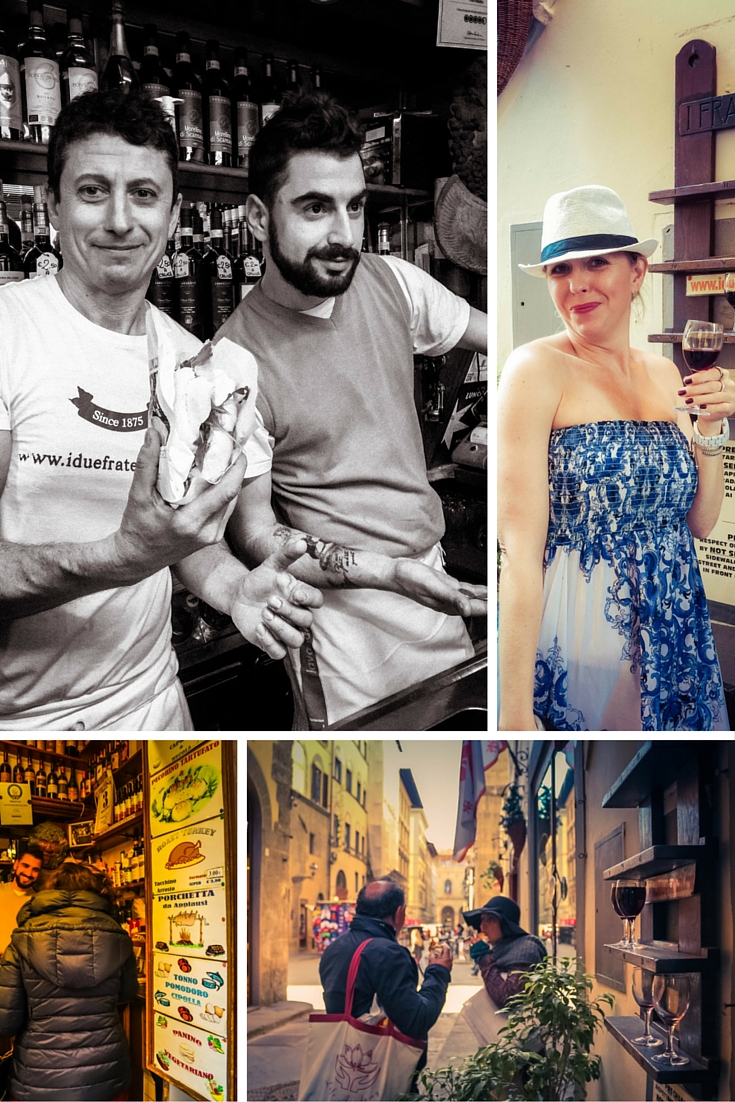 Let the traditional Florentine charms of Signum lure you away from the ceramic shops and leather stalls in Florence.

Find it on the Borgo dei Greci, apologetically arched into the thick stone walls, where it’s been for almost two decades.

Step inside to bygone gifts so elegant, so authentic, so unique you’ll want to shut the doors and have them all to yourself.

Jewel-like bottles of ink filled with rainbow colours, paper pop-up theatres reminiscent of dreams, leather-bound journals from another time, wax seals that could’ve come from the Medici desk, and swirling marbled paper inspired by the designs of the Renaissance.

Go home with time-honoured Florentine craftsmanship in your hands, and leave the modern gifts to others. 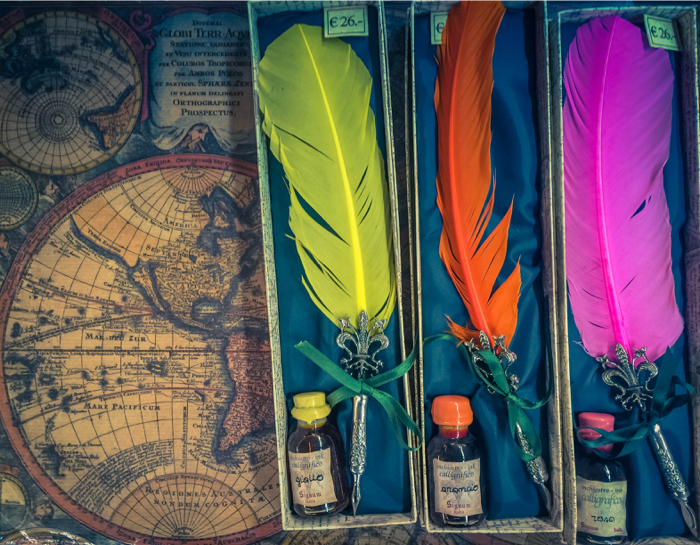 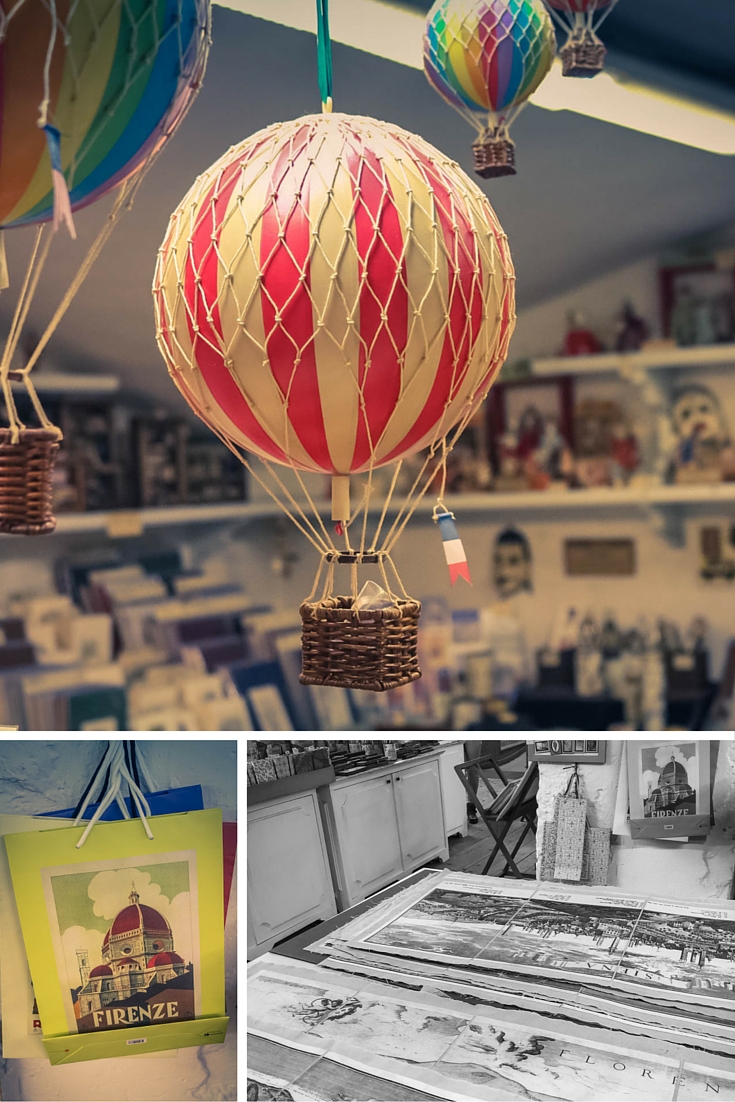 Brave the crowds on the Ponte Vecchio – a medieval bridge over the river Arno – and stroll past the jewellery shops that have been glinting on the bridge since the 16th century.

Glance up to the East side and you’ll see the Vasari corridor, a passageway that carried the Medicis safely between the Uffizi and the Palazzo Pitti.

Time it right and walk the Ponte Vecchio at dusk when the sun bathes this pretty tumble of brickwork in golden light. Pause for a moment halfway across and you’re rewarded with wam-bam views of the Arno, as well as an ideal photo spot.

Next, move on through the hoards and head east towards the second most famous bridge in Florence: the Ponte Santa Trinita – the oldest elliptical bridge in the world.

From here drink down the gorgeous views of the Ponte Vecchio then, once you’ve had your fill, seek a sugar rush from the Santa Trinita Gelateria, found in the historical Frescobaldi Palace facing the bridge.

Rich, creamy, and whipped from fresh raw ingredients, the gelato scooped up here will candy-coat your synapses in mind-popping bliss.

Go classic if you want, but I recommend trying Santa Trinita’s more inventive offerings such as: dark chocolate sesame, peanuts and chocolate, or yogurt with strawberries and honey. 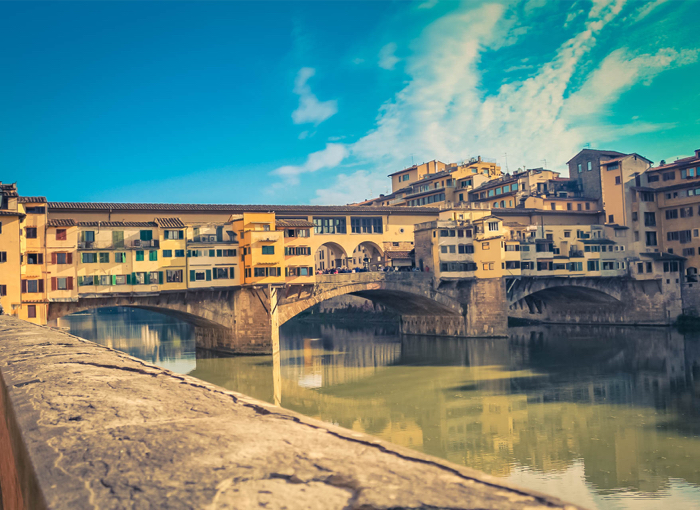 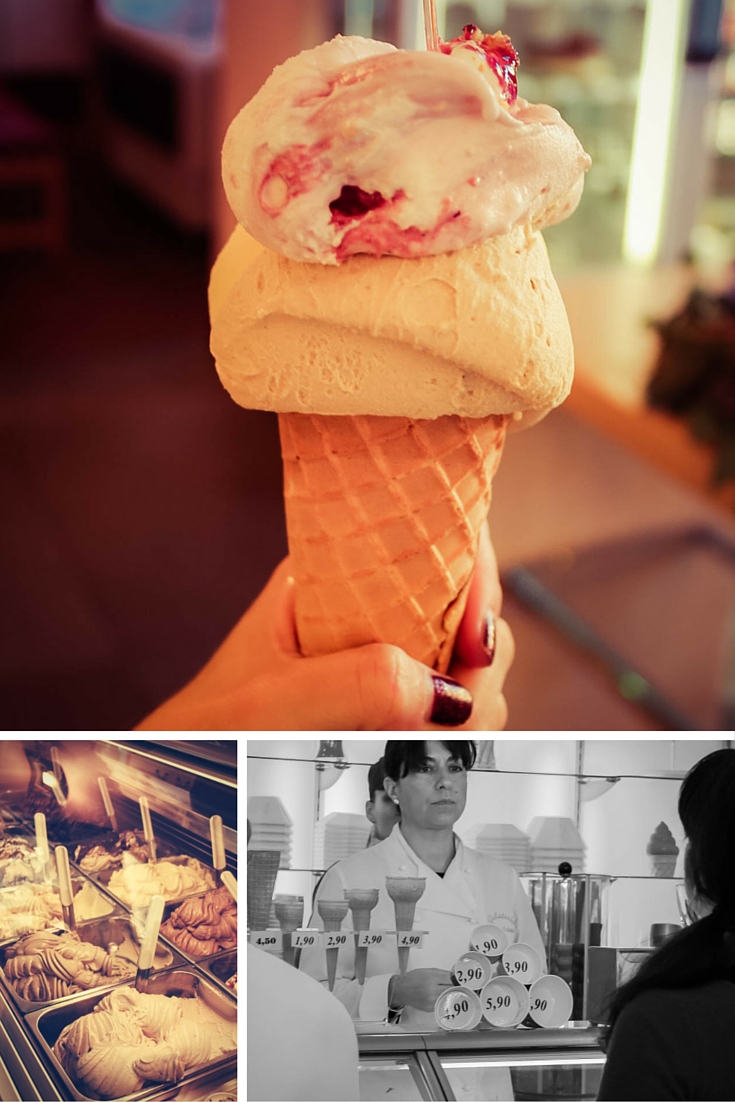 Controversial as this may be, I’d skip the Uffizi Gallery if you’ve only a day in Florence. Or, alternatively, give it your full attention and skip some of the other sights.

Yes, it’s the finest gallery in Italy with some of the world’s most exquisite artistic treasures: The Birth of Venus by Botticelli, Adoration of Magi by Da Vinci, Portrait of Isabella Brandt by Rubens – but as such, it deserves your full attention.

By the time we reached it, after hours of wandering, my mind had left the building; there’s only so much beauty my grey matter can absorb before it flips over the ‘closed’ sign.

Not even my feet were co-operating; they were throbbing because of Florence’s ancient cobbles and my inappropriate footwear.

Instead, walk the narrow courtyard – or cortile – that separates the Uffizi’s two wings. Pass under the watchful gaze of the 28 silent statues lining the rectangular passageway and promise yourself – and them – that you’ll be back soon. 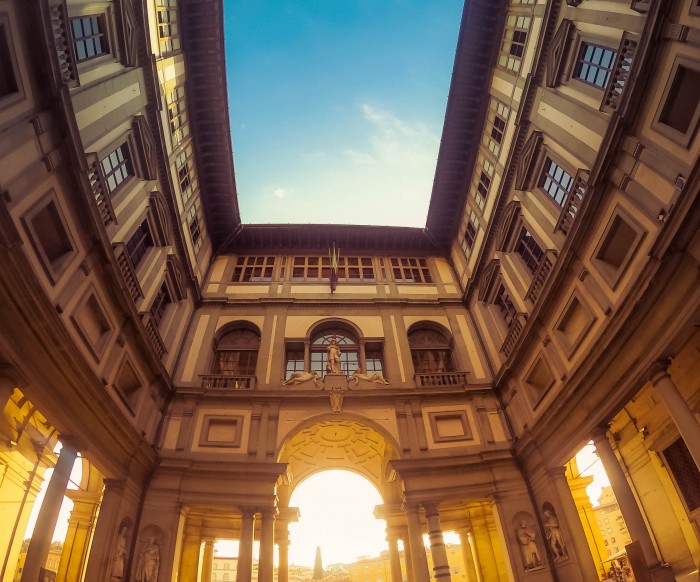 I visited Florence as part of a 7-day Mediterranean cruise press trip with Silversea. Our first stop was the port of Livorno in Tuscany. We could’ve visited Pisa or the Tuscan countryside as our shore excursions, but Florence was too tempting a city to resist.

It's always so very nice to read about people's experiences of my city and Claire, that's the way to do it. Sometimes bite the bullet and just journey on and it looks like it really paid off. I've just published a post that captures some photographic highlights around Florence and I hope you and your readers will enjoy them and that it will bring back happy memories of my city.

here is the page http://www.fibnb.com/insights/florence/things-see-florence-italy/

How to spend one day in Marseille

[…] I saw on my second Silversea shore excursion, however, (my first Silversea cruise stop had been to Florence) was not as devilish as I’d been led to believe. True, I only had a day in Marseille; not […]

The Duomo looks to me like it should be a birthday cake with all the unusual colours, rarely seen on cathedrals, unless of course, you happen to have been to Siena first. Love the pictures. Are you sure you weren't chatting up those lush brothers? X