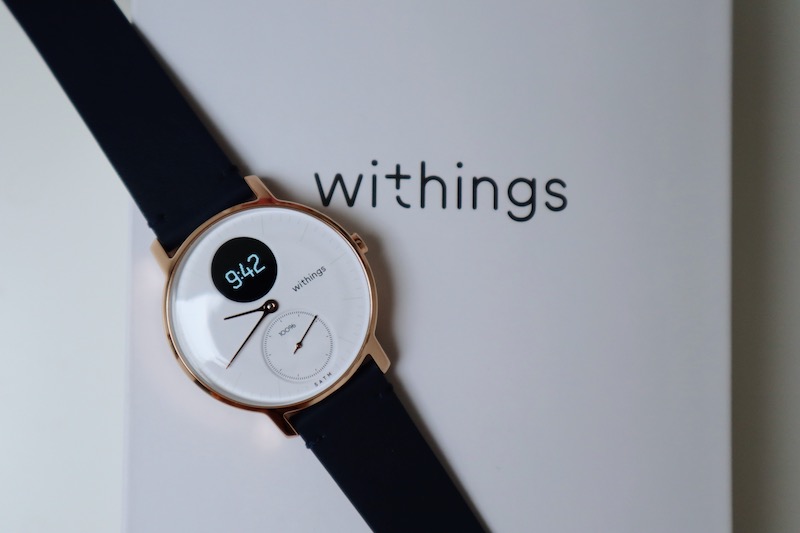 This is my review of the Withings Steel HR watch. It’s a smartwatch and activity tracker with a gorgeously stylish and simple design so it can be worn as an everyday watch in all situations. It looks just as good on a night out or in the office as it does in the gym!

Before I start with my review I have a disclaimer. I bought this watch myself and had it for about three months. I wrote this review and then a few days after writing my review the watch broke. The hour hand got stuck and nothing I did would budge it. I was annoyed but I’d bought the watch via Amazon so I sent it back and got a full refund. Amazon customer services were amazing but Withings customer services were very slow and it took over a week of back and forth messages to get the confirmation I could send it back to Amazon.

I didn’t initially plan to buy the watch again but five months later I was missing it so I’ve re-bought it again. I’ve never re-bought something after the first version had been faulty but I loved this watch so much I wanted it again. I really hope I was just unlucky with my first one, but if you do decide to buy a Withings watch then I recommend keeping hold of your receipts and packaging in case you do need to return it.

Why I chose the Withings Steel HR 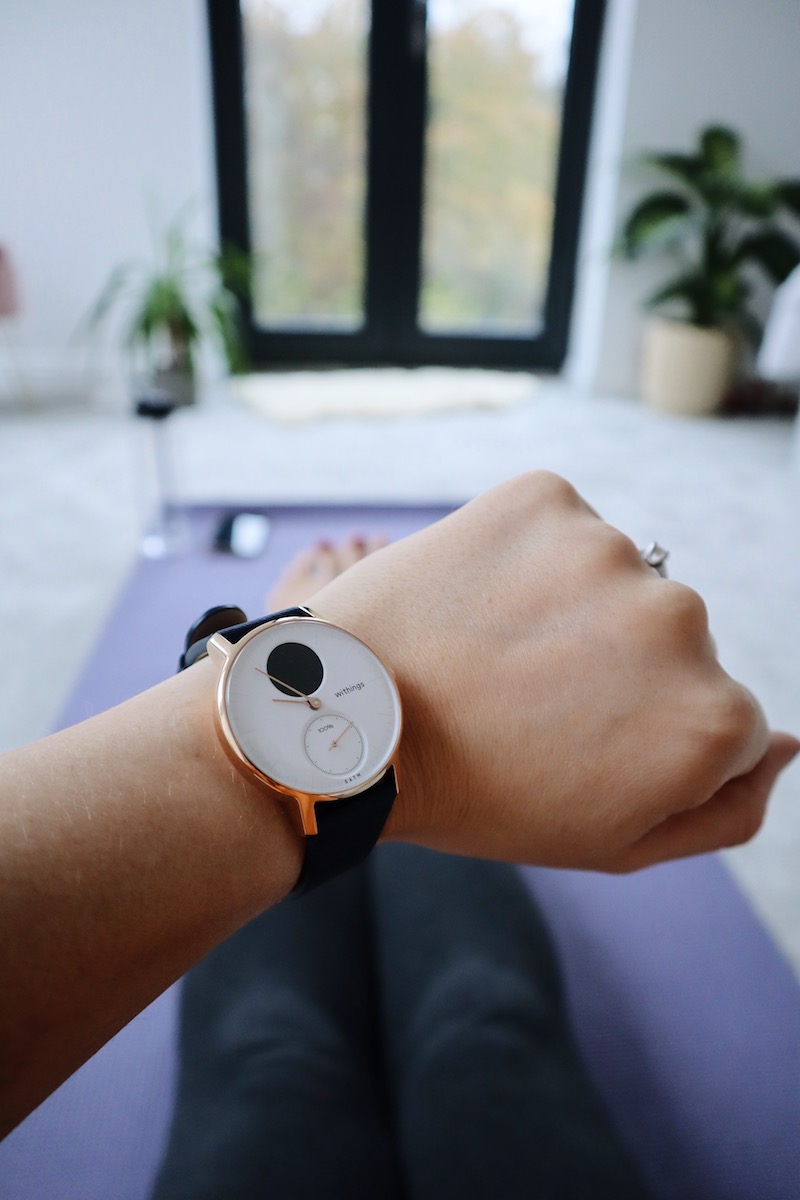 I decided to buy an activity tracker watch during the first trimester of my pregnancy because I was feeling so tired and lethargic. I know everyone feels tired in the first 12 weeks of their pregnancy but on the rare days I dragged myself out of the house and went for a walk I felt a million times better. I thought an activity tracker watch might give me a little extra motivation to get out and about!

I decided to aim for the magical 10,000 steps a day but I found the step counter on my phone to be unreliable. I also have an iPhone XS Max and it’s enormous so I often leave it at home when I’m walking the dog or doing the school run. So I decided an activity tracker watch would be my best bet. The only problem was…activity trackers are a bit ugly!

I wanted a watch I could wear all the time – whether I was going out for the night, going to a meeting, going swimming or walking the dog! I couldn’t find anything that was a stylish, simple, classy watch but also had the functionality of a smart watch and an activity tracker.

And then a blogger friend of mine (Stephanie from From the Poolside) recommended I take a look at Withings and I knew I’d finally found what I was looking for! 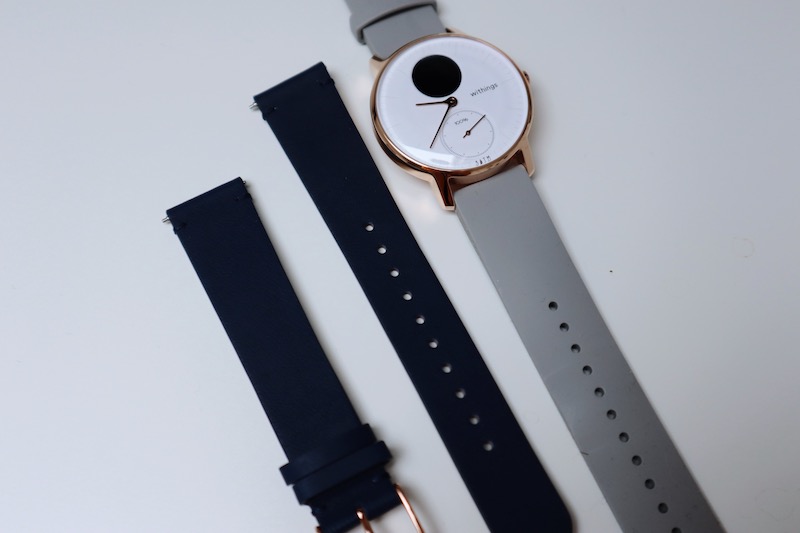 Withings have a few different designs starting with the Withings Move Basic Essentials priced at £59.99. This watch has more of a fun and informal design with a simple display but it still tracks your steps when walking and running. It tracks swimming, calories burned and tracks your sleep too.

I opted for the Withings Steel HR which is a bit pricier but has a few extra functions I was really interested in tracking and I prefer the design.

The Withings Steel HR looks like a regular basic watch but the two circular displays are really clever. The bottom one shows you what percentage of your daily step count you’ve achieved. The top display is a digital display and by pressing the little button on the right (which would usually be used to adjust the time) you can switch between different stats. 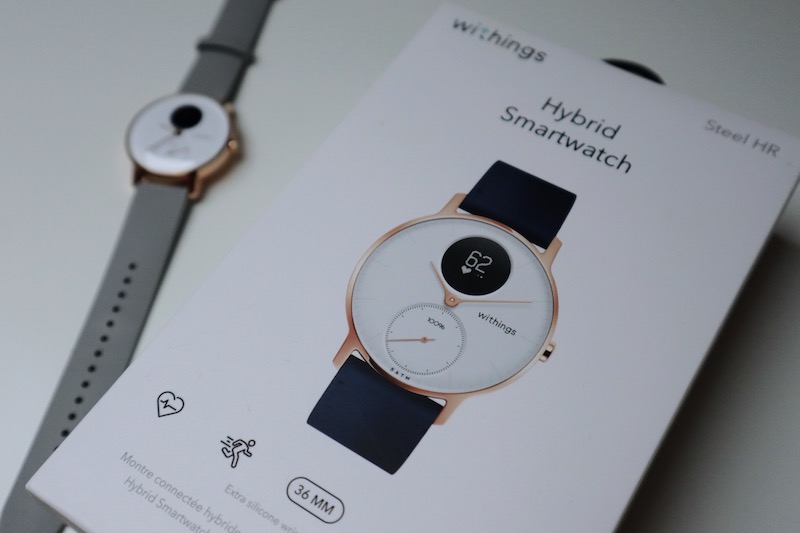 I wasn’t really bothered about tracking my heart rate until someone messaged me to say they found it to be important. This lady was a food blogger and said she could easily do 10,000 steps a day pottering around her kitchen and walking around after her toddler. She thought she was doing well until she realised her heart rate didn’t go up all day.

I’m assuming it’s the same for many people who are on their feet all day; just because you’re constantly moving it doesn’t actually mean you’re actually exercising!

So I wanted a watch with a heart rate monitor to check my heart rate is going up everyday!

I’ve enjoyed tracking my steps but I have found that I’m even less active than I’d thought! I thought I could quite easily reach 10,000 steps a day but I usually need to make a conscious effort to reach that figure.

I have found it motivating to watch my steps rise, especially during short walks when I thought I wasn’t going far. Walking George to school is 3,000 steps so if I do that twice a day I’ll easily hit 6,000 steps without a lot of effort. Before I realised it was a 6,000 step journey I’d often drive but now I make much more of an effort to walk both ways. 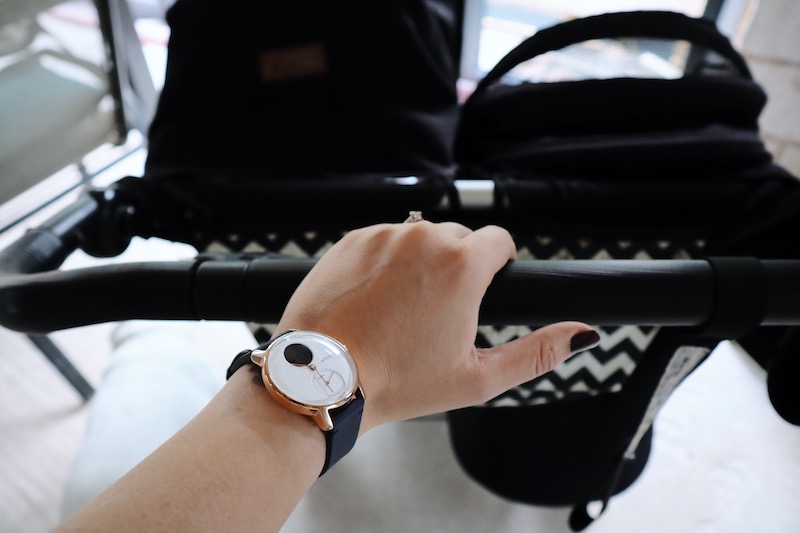 ^My only real issue with tracking steps is that I’m often walking with a pushchair so the watch automatically thinks I’m cycling (very slowly!) because it isn’t detecting my arms moving. I am able to use the app the change the recording from cycling to walking but I’m not sure how accurate it is.

The Withings Steel HR is also a Smartwatch, meaning you can sync it with your phone to get have your phone notifications displaying on your watch. I’ve tested this out to see if it works (it does) but it’s not something I have turned on.

I don’t even have notifications turned on for my phone. My phone rings if someone calls me but other than that I have all notifications off because I find it distracting and stressful and I don’t get anything done! But if you’re the kind of person who likes to get notifications then you’ll like this function. 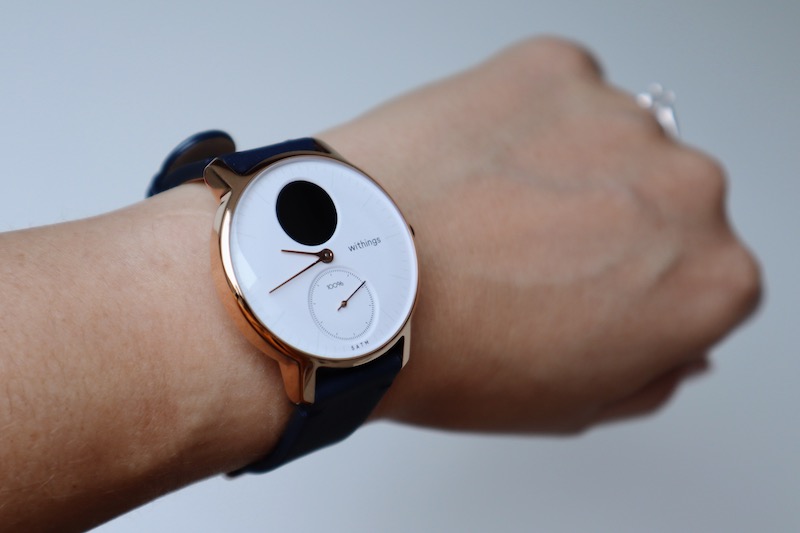 This is another one I didn’t think I’d be bothered about using but I LOVE it!

I always felt like tracking your sleep is a bit pointless because you always know when you’ve had a good or bad night’s sleep anyway! The thought of tracking it felt like an extra thing to stress about, but I find it so interesting.

I’ve become weirdly competitive with myself about getting a good sleep score and it encourages me to go to bed that bit earlier to get a full 8 hours!

I’ve noticed some interesting patterns in my sleep that may or may not help me get a better night’s sleep but, nevertheless, I find it interesting. I’ve found I go into a deep sleep almost immediately, but after 3am I rarely go into a deep sleep. I’ve noticed I don’t go into a deep sleep until Sam is in bed too and I NEVER go into a deep sleep if Joseph comes into our bed. Joseph has bad dreams and often crawls into our bed at around 2am with talk of monsters and foxes (The Gruffalo has a lot to answer for as both my kids are terrified of foxes!) I used to lie next to him, tossing and turning and never fully getting back to sleep but hoping I might eventually! But now that I’ve realised I really don’t properly go back to sleep I just get up and go and sleep in Joseph’s bed. It’s not ideal but it’s the easiest way to make sure the whole family gets a good night’s sleep.

There are other things I’ve noticed through tracking my sleep that are really obvious but I didn’t really pay attention until I saw it on the screen.

I sleep better if: 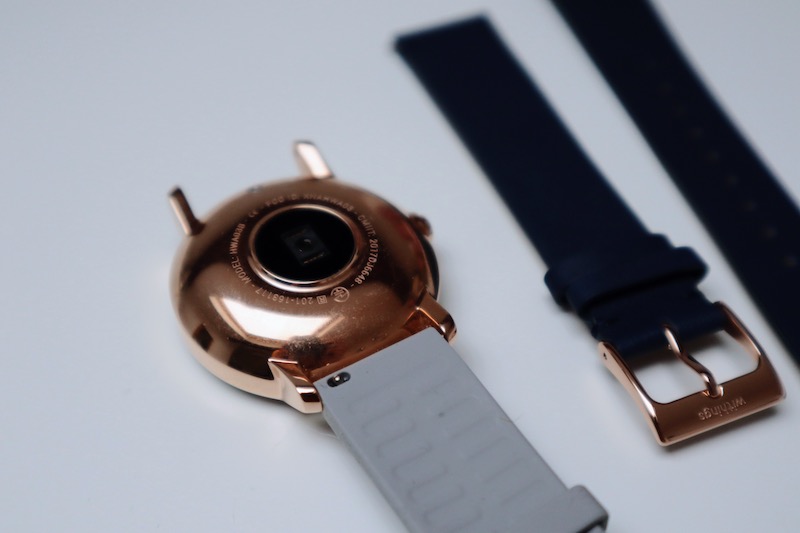 ^Changing the straps is a bit fiddly but manageable and it’s nice to be able to change the look of your watch really easily.

It says on the website that the battery lasts up to 25 days but I can honestly say mine lasts way longer. I charged mine for an hour when it first arrived so it went up to 35% charged and I didn’t need to charge it again for 30 days.

This may be because I don’t have smartphone notifications turned on so I’m not using it as much as many people. From reviews I’ve read on Amazon, other people have complained about the battery life but I without notifications I’m really impressed.

Either way, it’s easy to charge as it comes with a little pad you connect it to and plug it into a USB plug. I’ve only charged mine twice and I did it while I was driving as I know there’s nothing to track while I’m driving anyway.

The alarm – great for parents!

Again, another function I didn’t think I’d be bothered about using but I love the alarm on the watch because it just gently vibrates on your wrist. It’s such a gentle way to wake up!

But it’s also a great alarm for parents because it doesn’t wake anyone else in your house up. If I set an alarm for 6am it would definitely wake my kids up, despite sleeping on a different floor to them! So I like having an alarm that won’t disturb anyone else. 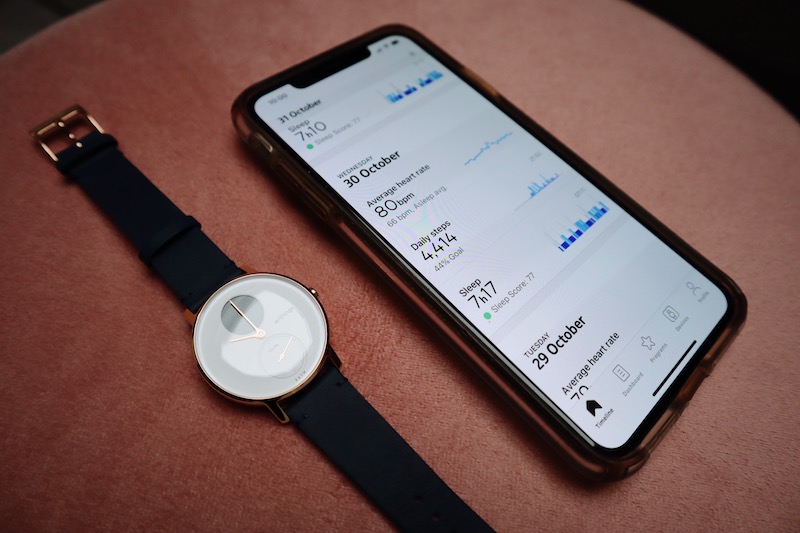 I’ve found the app really easy to use. The display is simple and easy to see all your stats and it generally syncs pretty easily. I have had a few times where the watch takes a while to sync to the app but there’s never anything I urgently want to see so I don’t mind. It’s called Health Mate and shows all your stats from each day and this is where you set it up with your personal details like your height, weight, age and goals.

And because the watch is connected to your phone, the time will automatically adjust when you go abroad or when the clocks change for daylight saving.

I honestly don’t know how accurate the calorie counter is as I’ve been surprised to find I burn WAY fewer calories than I imagined. I don’t really count my calories consumed but I have a big appetite and eat three big meals and snacks everyday. I’m fairly healthy but I do eat quite a lot. The calorie counter on the Withings Steel HR tells me I often don’t burn more than 1,200 calories in a day.

I’m not saying this isn’t correct because I genuinely don’t know but surely if I was only burning 1,200 calories in a day I’d be gaining weight!? 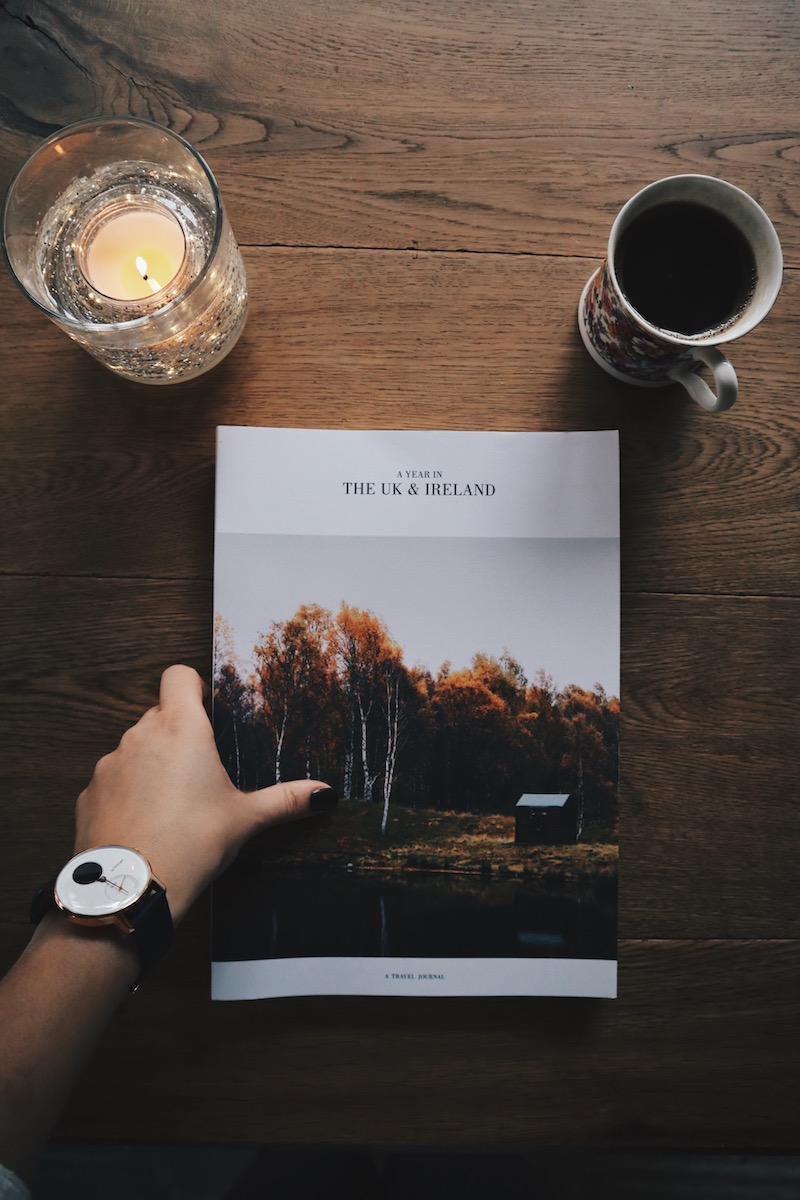 There’s my review of the Withings Steel HR. Even though my first one broke, I still couldn’t find anything better and even after a full refund I bought it again. If you’re looking for a stylish activity tracker then I can’t recommend it enough!