I know lots of people get really nervous about their baby’s first flight. I was so scared the first time we flew with George and we only flew to the Isles of Scilly! It took less than an hour and Sam and I were prepping for it like we were flying to New Zealand with him!

Since then I have taken countless flights with my two boys (well I probably could count them but there’d be a lot to count!) George is now nearly 2.5 and Joseph is 8 months and they’ve had so many flights between them.

Some of them have been absolutely perfect flights where both boys have either slept or sat quietly and been perfectly happy. Some of the flights have been awful where they’ve cried or whinged from take off until landing. But each flight gets a little bit easier and I’d like to share everything I’ve learned with you today.

Here goes, here’s everything you need to know about your baby’s first flight from booking it, to what to take with you, boarding the plane and feeding your baby. I have more tips for flying long haul with a baby which focuses more on the actual flight than the booking and organising the flight. 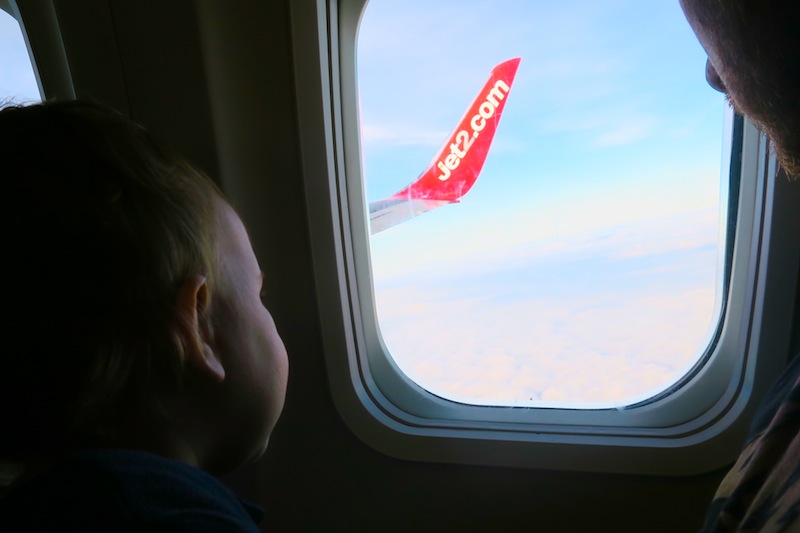 Applying for your baby’s passport is quick and easy

You can read Char’s full guide to applying for your baby’s passport. I recommend getting your baby passport photos taken at Max Spielman. They’re not too expensive and they’re really good and they pretty much guarantee that it won’t be rejected.

When I applied for both of my boy’s passports we had them back in less than 2 weeks. I actually applied for Joseph’s over the Christmas holidays and I got it back in 4 working days. I was amazed!

Your baby can sit on your lap until they are two so you don’t need to pay for their seat. You do need to pay taxes which usually seem to work out at about £30.

It’s usually recommended that you book bulk head seats when travelling with a baby, especially when you’re flying long haul. This is so you can add a bassinet for your baby to sleep in. But we’ve found this isn’t a great option. Neither of our boys would sleep in a bassinet anyway and being at the front of the plane is noisy and bright. There’s often a big TV screen just above the bassinet and you have a lot of people walking past and queueing next to you while they wait for the toilet.

The ideal flight time is about 2.5 hours

If you’re worried about flying long haul then you really don’t need to be! But, if for your first flight you want to keep it nice, easy and simple then I’d recommend aiming for a destination about 2.5 hours away. We’ve found this is the idea time. You’ve got time to get settled, have a nap, have something to eat, play for a bit and then it’s time to land!

BUT, if your pushchair folds away into two pieces then this is considered to be your two things. So the bulky travel systems where the seat comes off the frame can be awkward for airlines. I have seen some families putting their pushchairs into a special bag for travelling – I’m not sure how this works when you have two pieces neatly packed into one bag so you’d have to double check with the airline.

We always travel with a lightweight umbrella stroller because it’s much easier. I really like the Maclaren pushchairs that fully recline.

Note: I’d always recommend taking your own carseat. I’ve hired one before and it looked like it was about 50 years old. When you can take your own for no extra cost you might aswell. 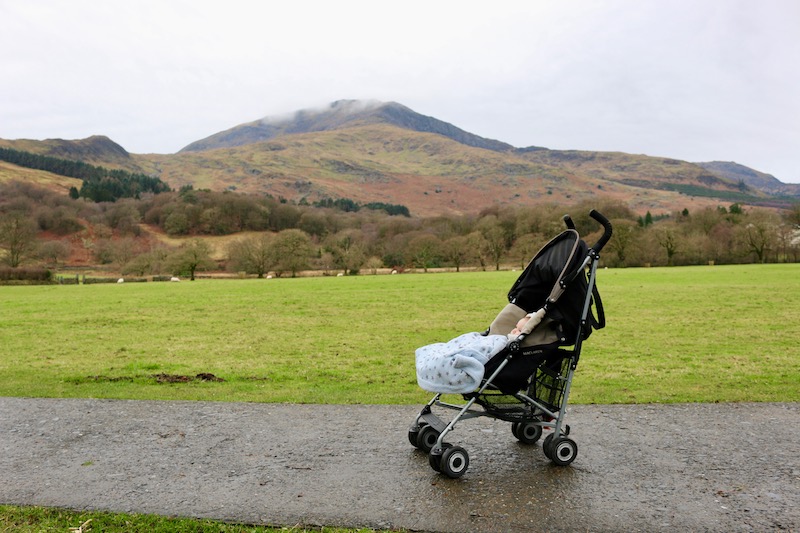 You can take a nappy bag on board for your baby. Most airlines specify that it needs to be a small piece of hang luggage for a baby so a cabin suitcase probably wouldn’t be accepted.

When George was almost two we started paying for him to have his own seat, even though he could have sat in our laps. But at this age he was too big to sit on our knees for long and as we already had Joseph it made sense to have 3 seats between the 4 of us.

I would recommend contacting your airline before you do this but we spent hours on the phone to airlines trying to get it booked and this is usually what happened.

When you’re booking online you have to just lie about your child’s age and say they are aged 2 so you can book a seat for them (a child under two will not be allocated a seat and there’s no option to add one). But when you arrive at the airport you have to tell a member of staff what you’ve done so they can amend the booking. You’ll then be questioned at every point of security about why you have a seat for a child under 2. There will be more confusion when you try to board. There will be even more confusion when you sit in your seat. When you take off and land, the airline staff will insist your child sits on your lap but they can move over to their seat once the seatbelt signs come off.

Don’t bother taking a car seat on board

We bought a special car seat that was apparently approved for all airlines because it’s narrow enough for the seats. We thought this would be safer and make George feel like he was in the car and would probably fall asleep in. We got it on the plane (after a lot of questioning and more confusion) and had it all strapped in but we were then told it was too big (even though it fitted perfectly). This was really frustrating because I’m sure a child would be safer in a car seat! 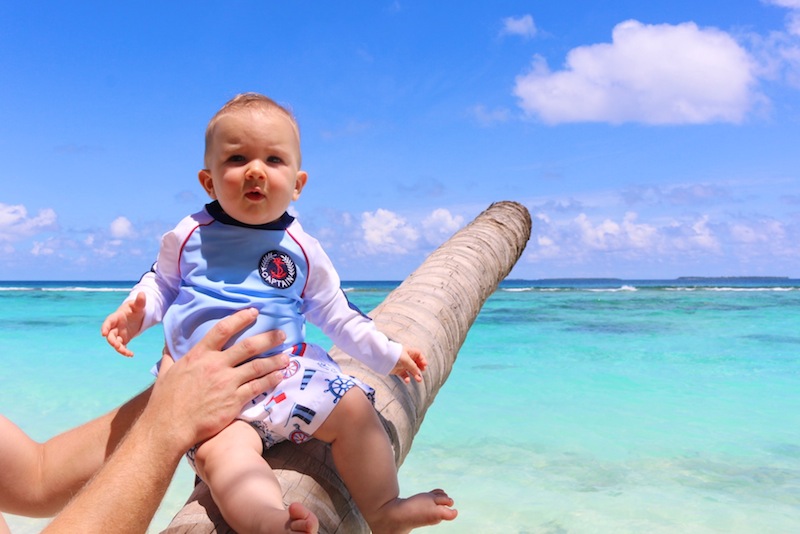 You can take your pushchair all the way to the gate

Your pushchair is then put on the plane and comes out on the oversized baggage carousel at the other end.

Some airlines give you giant carrier bags for your pushchair but most don’t. Some of ours have come out with a few grubby marks on them.

You can take your baby’s liquids through security

You can take food, milk and water through security, they’ll just need to take them away to test them. At some airports they’ll only accept water if it’s in a baby bottle. Most airports are nice and will let you take a normal plastic bottle of water but I’ve had it taken off me before, even when I’ve insisted the water was for the baby.

Families are always encouraged to board first but I prefer to board last. You’re stuck on the plane for long enough as it is! 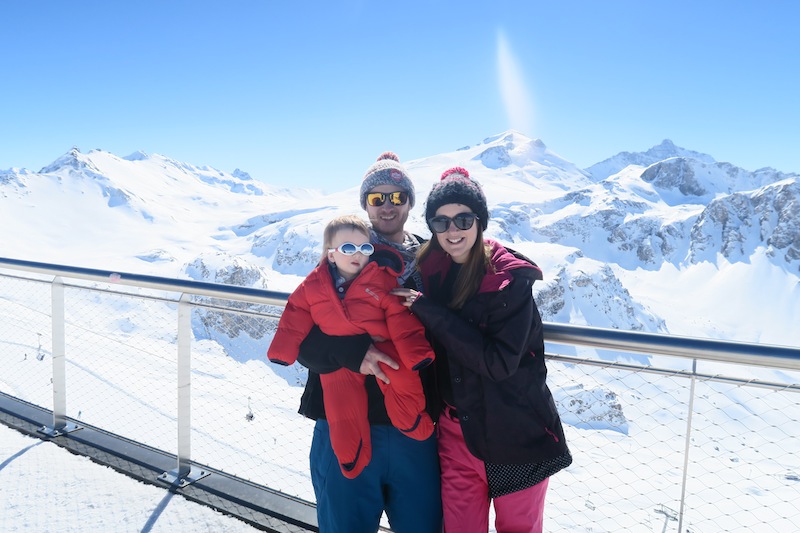 There are often soft play areas in the airport

But the UK is the worst place to be if you’re queueing with a baby!

You can also get warmed cow’s milk from coffee shops if you’re travelling with older babies. 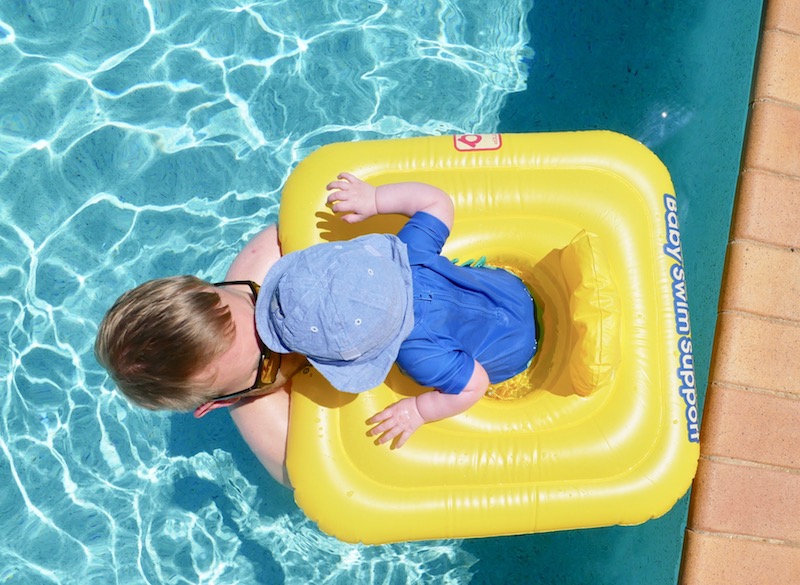 Before flying to Barcelona with Joseph who was 10 weeks at the time, I was frantically Googling tips for breastfeeding on a plane. I breastfed my eldest son too and was perfectly comfortable feeding in public but the thought of breastfeeding on a plane freaked me out. I was so nervous about being squished next to someone who made me feel awkward or uncomfortable that I started to unnecessarily panic myself.

It turns out that there aren’t many blog posts about nursing on a plane and I think that’s because once you’ve done it you realise it isn’t a big deal at all. In fact, a plane is one of the best and easiest places to feed a baby and there’s seriously nothing to worry about.

Get the window seat

I prefer the window seat as it’s the most private and your baby will have fewer distractions. Some women prefer the aisle seat so you’ve got some elbow room but then you’ve got the issue of people bumping you as they walk past.

If you’re feeling nervous and you’ve got the window seat you can just turn towards the window with your back to the other passengers and no one will see a thing.

I usually opt for a cami vest with a light tshirt of the same colour on top. If the cami and the tshirt are the same colour, people can’t even tell when you’ve lifted your tshirt up to feed.

I actually hate trying to cover up with a scarf because it gets in the way but I usually drape one over my shoulder as a kind of sign that I’m breastfeeding and want some privacy. Sometimes people don’t notice I’m feeding and they come right over to have a look at the baby and that’s really awkward!

Make sure they’re tired and hungry at take off

This usually happens naturally anyway because your baby will probably fall asleep during the journey to the airport and wake up as you arrive. Feed your baby as soon as you arrive and then try to keep them awake until you board the plane. This is usually the perfect amount of time for your baby to get a bit tired and hungry just in time for takeoff.

If your plane is delayed it can mess things up but I have been known to spend an hour singing nursery rhymes and bouncing a baby to keep them awake before a flight!

I’d always recommend eating a big meal before the flight. It’s awkward trying to juggle feeding a baby in such a small space without adding food and drinks into the equation. Of course, many mums might find it to be fine but, in my opinion, it’s better to be safe than sorry when it comes to eating! There’s nothing worse than breastfeeding hanger!

If you’d like any more information about family travels, flying with kids and holiday ideas then check out our Family Travel Blog section. 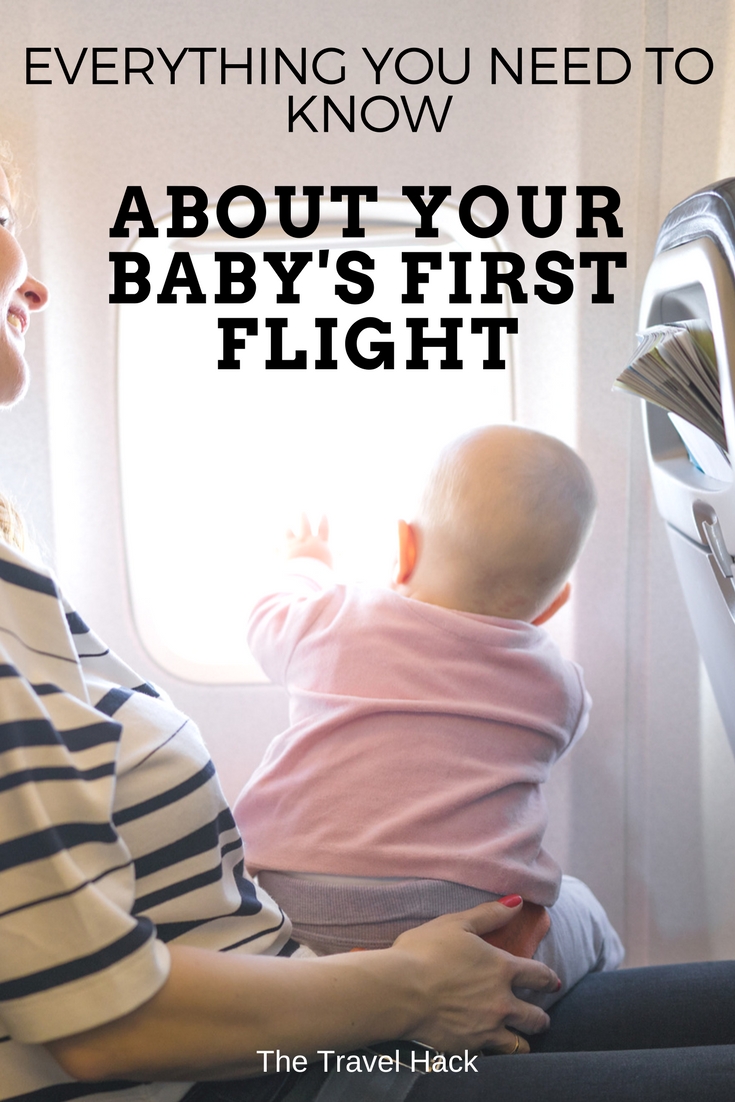 Travel Tips
It’s been all over the news recently about how expensive it is to use your phone when you’re abroad. Well duh, we all...

The Mama Hack , Travel Tips
*This baby holiday packing list has been created in collaboration with The Gro Company.   I’m not going to lie, it took me a...

Travel Tips
Here’s my downloadable pre-holiday checklist to help you stay organised while booking and organising your holiday. Holidays are one of the most exciting times...