If you’ve ever seen the film Into the Wild

then these photos may be familiar to you because Salvation Mountain is featured in the film. If you haven’t seen the film or read the book then I strongly recommend you add it to your list because both are brilliant, especially if you have a nomadic, adventurous streak (which I’m sure you do if you’re reading this blog!)

Salvation Mountain is one man’s tribute to God and the result of 28 years of colourful dedication.

Leonard Knight was the creator of Salvation Mountain. He began work in 1984 in Niland, California; 190 miles south of Los Angeles and his work slowly grew and evolved.

Salvation Mountain is now as tall as a three-story building and as wide as a football field. This entire space is covered with the message, ‘God is Love’. 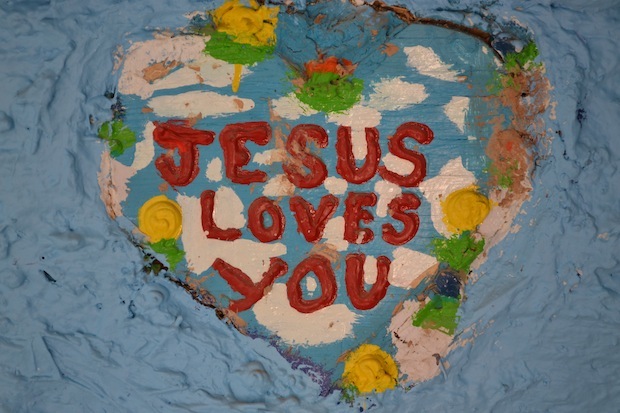 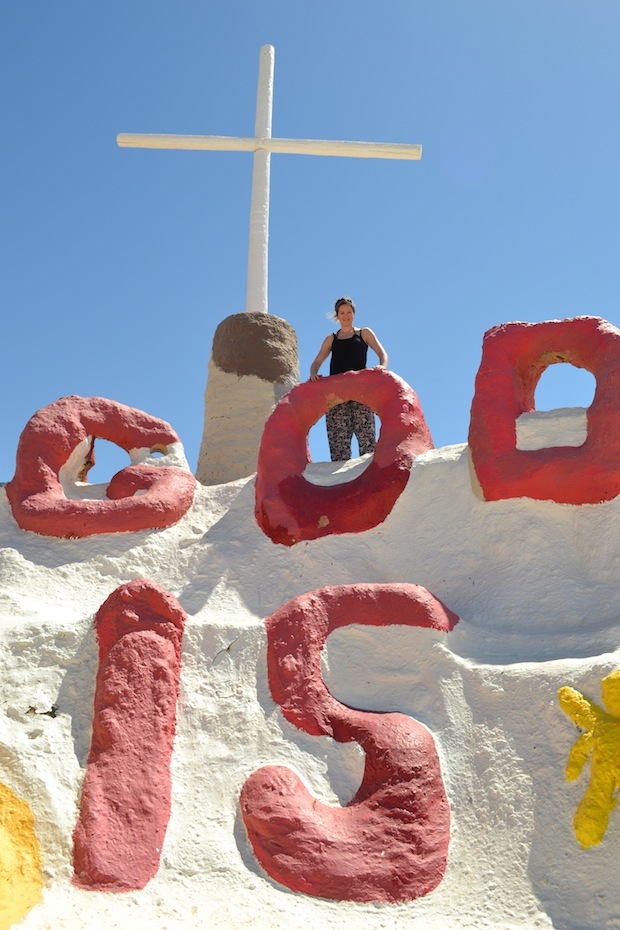 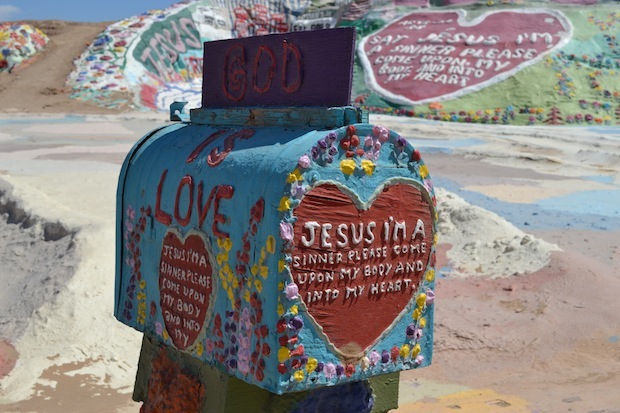 When Knight began creating Salvation Mountain he used concrete and sand but it soon collapsed. Undeterred, he started again using adobe clay and hay bales for the main structure and window putty for the decorative details. The majority of the materials were donated by people who loved Knight’s work.

Unfortunately, Leonard Knight has now passed away but there are people who are continuing his legacy. He described Salvation Mountain as a love story: “I painted the mountain because I love God and I love people.”

If this had happened anywhere else then I’m sure that the local council would have destroyed the mountain and removed Knight from the land but this is almost no-man’s land. There’s nothing to see for miles around other than desert and tiny, ramshackle towns with nothing more than a grocery store and rusting cars.

In the far distance you can see the odd caravan through the blurry haze of heat where hardy nomads prove it is possible to survive in this unforgiving climate. 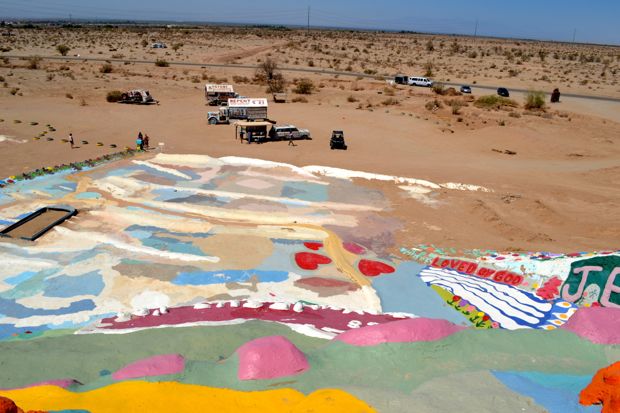 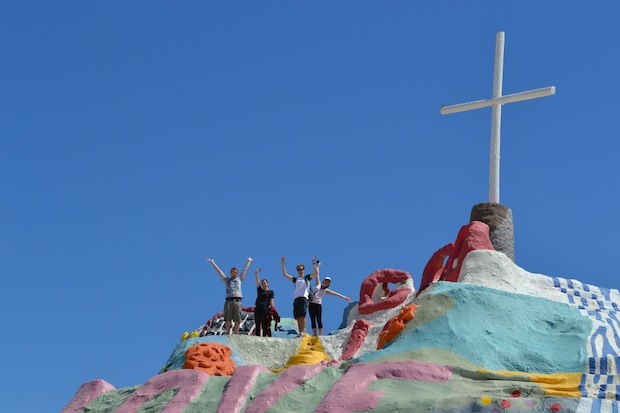 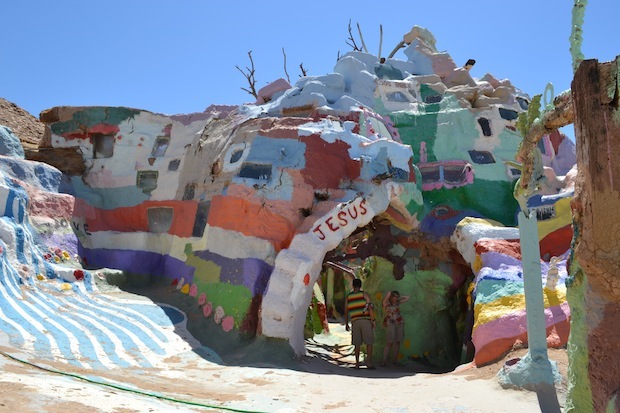 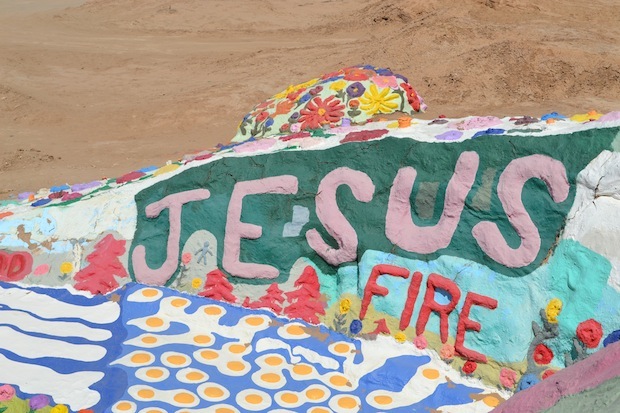 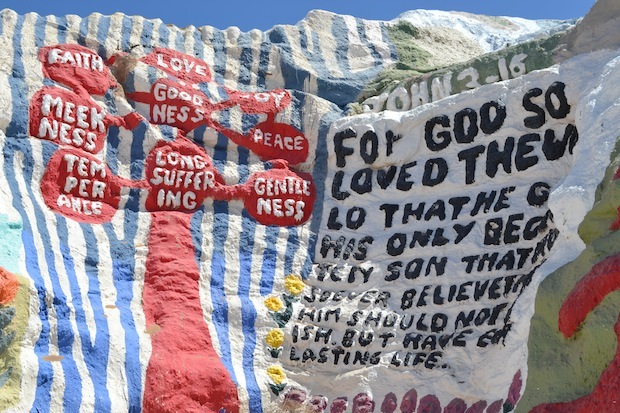 As I step outside the van an intense heat makes me feel like I’m inside a hair-dryer. We immediately pin ourselves to the four-inch strip of shade created by the van and long for the air-conditioning. The moisture was sucked from my lungs while the heat attacked my body. It was so hot I struggled to breathe!

I explored the old cars of Salvation Mountain first and examined the intricate detail and religious words that covered every inch. It suddenly dawned on me how long this took and how much patience was involved. One car alone could have easily taken six months to decorate. 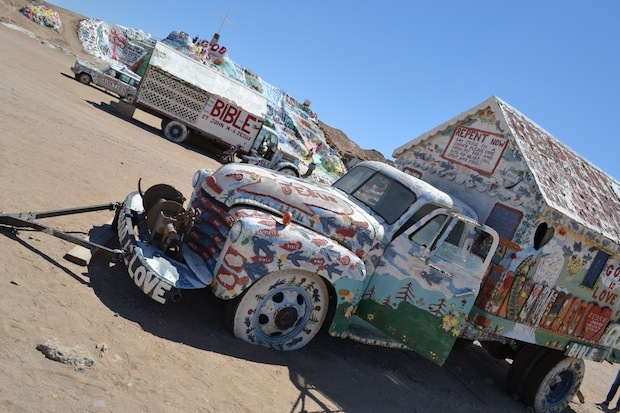 This is the truck that Leonard Knight lived in.

You begin walking up to Salvation Mountain via the faded Yellow Brick Road so you can’t help but feel like you’ve been transported to a kid’s storybook. Giant, colourful flowers look like sweets that you could pluck right out of the ground and chew on for days.

Religious text is all over Salvation Mountain with a strangely moving effect, whether or not you’re religious. Maybe it was the heat getting to my head but I was blown away and silenced by the mountain.

I nervously climbed the wonky steps to the top where the heat became even more intense. It wasn’t even summer, how could anyone live here!?

Leaning against a giant cross at the top and I was able to see the surrounding desert and admire the scale of Salvation Mountain.

To the right and there are small rooms that must have taken years to mold. The rooms are strangely cosy with details that look like picture frames on the walls. It felt like a nana’s living room family photos replaces by words of love.

An unfinished section of Salvation Mountain lies to the right and this feels like a mixture between a colourful forest and a frightening home. It’s like stepping inside a friendlier version of the House of Horrors at a fairground. Knight intended for this to be a museum and he made it using hay bales and disguarded objects likes tires and utility poles. 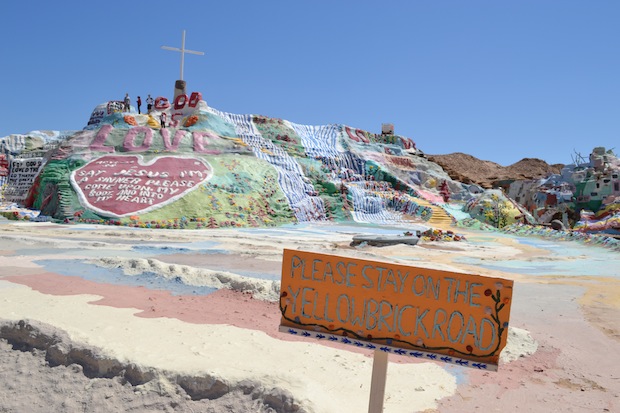 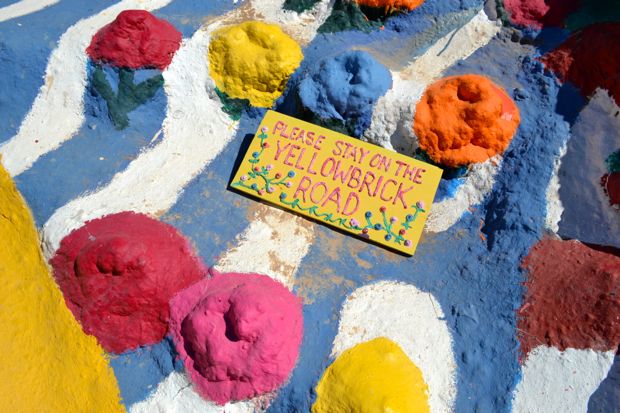 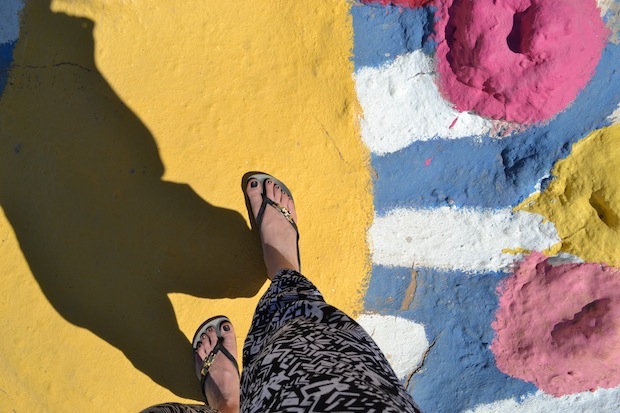 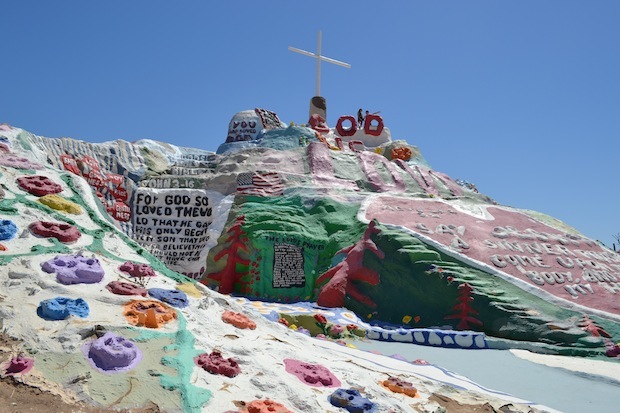 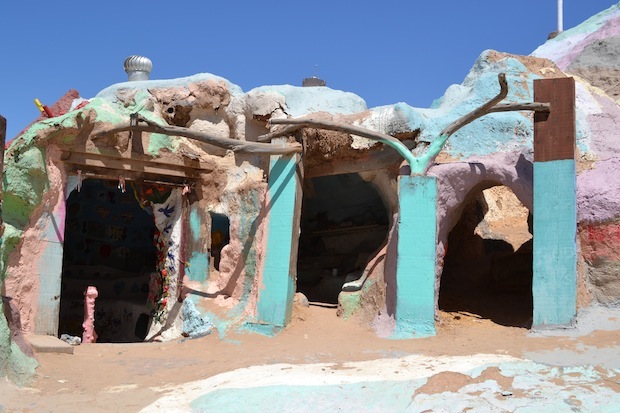 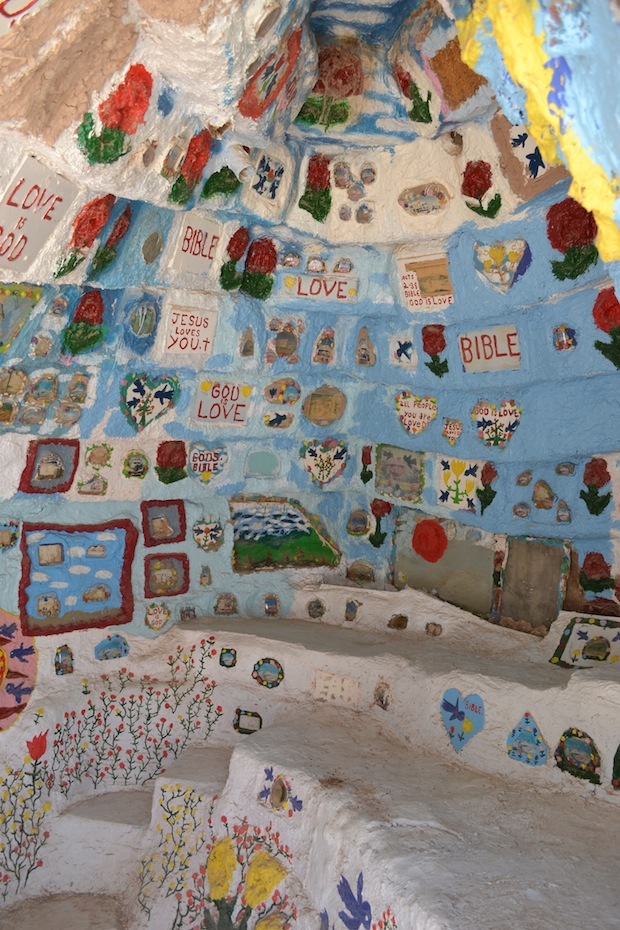 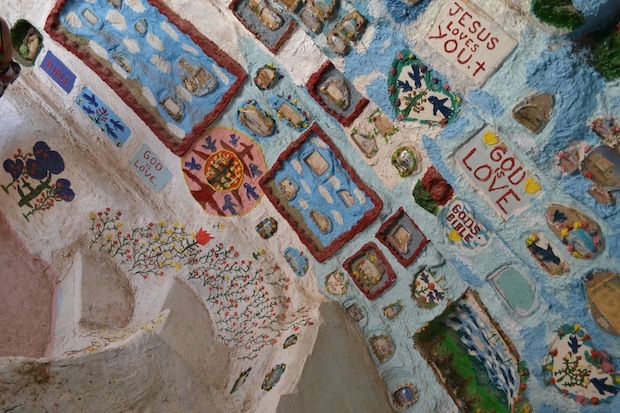 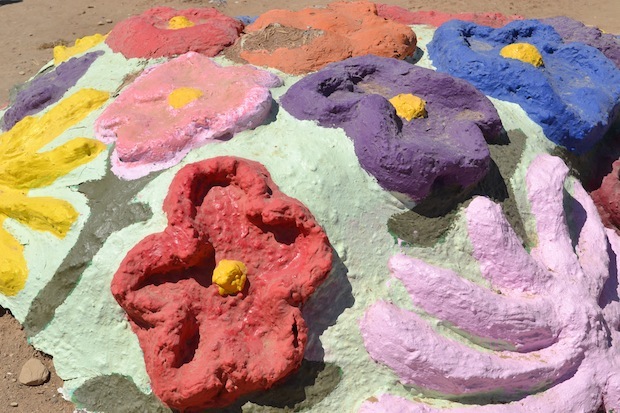 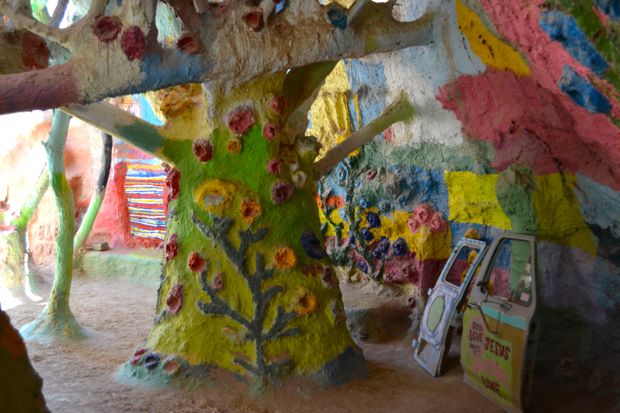 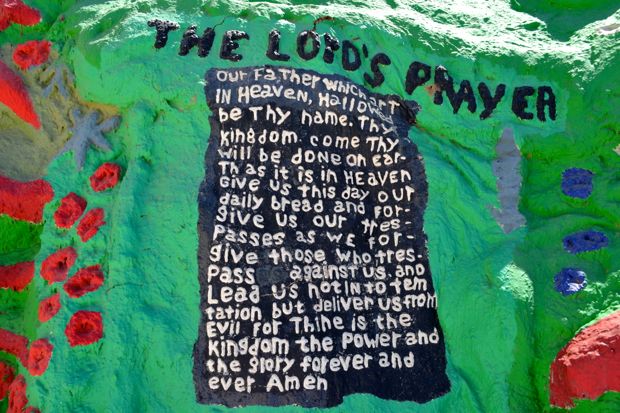 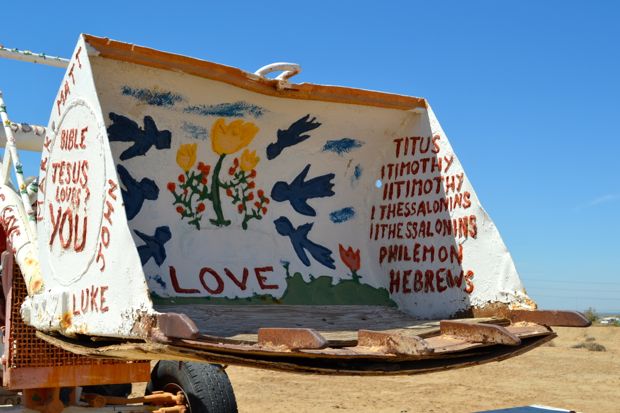 We didn’t spend too long at Salvation Mountain quite simply because it was far too hot, but if you’re passing by I would strongly recommend a visit. 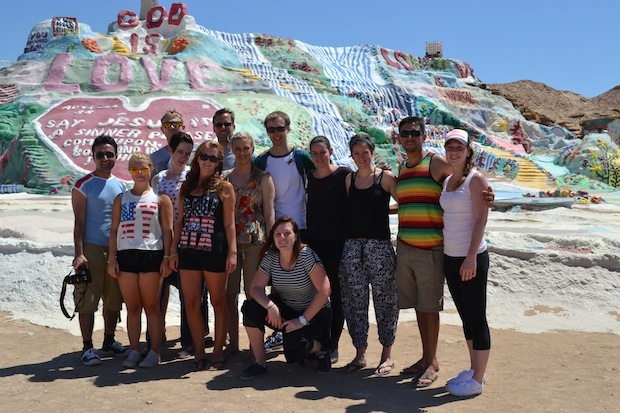 I visited Salvation Mountain  during my Westerner 2 Trek America road trip. This has recently been added to the Trek America itinerary when travelling between San Diego and Lake Havasu.

USA
This week I’m delighted to welcome Char Taylor from Taylor Heart’s Travel to The Travel Hack. She’s put together an Insider’s Guide to San Francisco....

USA
If you read my itinerary to spending 3 days in the Florida Keys you will have seen that my favourite day was the day...