Yes, that’s right. As of next month I will be a full time blogger and social media consultant. *Cue excitement and uncontrollable jumping up and down.

*Closely followed by wide eyed fear and a little voice at the back of my head that is asking what the hell I just did?

Before I begin I should let you know that I’m not doing a classic travel blogger thing and ‘quitting my job to travel the world’. I’m not ‘breaking out of my cubicle’. I’m not a lawyer or a banker with a well paid but unfulfilling job that I feel like I need to escape from. In some ways I wish I was. That would have made the decision easier!

You see, I love my job in social media. I work as the social media executive for one of the world’s largest independent travel retailers. It’s a dream job.

But I’ve had a niggling feeling at the back of my mind for months now and I know I need to give it a go.

I will be travelling more. I will be blogging more. And I will be doing more of what I love which is helping small businesses to effectively use social media.

I blame it on all these inspirational quotes on Pinterest that tell me to create my own dreams, be the person I want to meet, dare to dream. Yadda yadda yadda. You’ve heard them all.

As I work in social media I’m bombarded with these quotes and I thought I’d become immune to them, even irritated by any update that began ‘The world is a book….’

But one day, my colleagues at gapyear.com placed this quote by Jack Kerouac on Facebook and I couldn’t stop thinking about it. 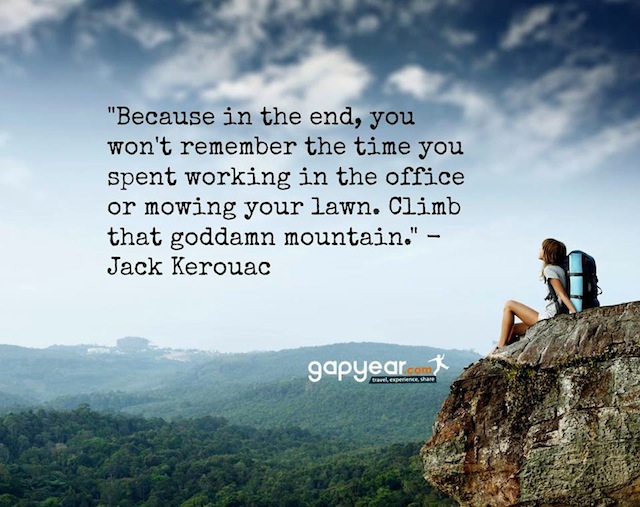 It stayed in my mind for weeks and made me feel uneasy as I saw the truth in it. It’s funny how some words will breeze over you without a second glance but others will hit a nerve and keep hitting it until all you can think about is climbing that goddamn mountain.

No matter how much I love my job, when I’m 90, am I going to remember all those years sat in the office, or will I remember the days I spent at the top of the mountain?

So after months of consideration, I’ve decided to put my walking boots on and start climbing.

I’m travelling a fair bit over the next few months. I’m going to Iceland, a yoga retreat, two trips to Dublin and lots of exciting European trips which I’ll tell you more about soon.

I’m staying on as a freelancer at Flight Centre, working with a few start-ups and also launching a new blog which will be ready very soon. It looks like freelancing is going to be very busy, very exciting and very rewarding but watch this space to find out more.

This is the first question people ask me when I tell them I’m going freelance. It was also the question I was asking other freelancers when I made the decision. You want to know if there is some kind of trigger that suddenly makes up your mind.

In all honesty, it was something I knew I would do eventually so I thought, ‘why not now?’

I am young but it means I have no responsibilities. I have no mortgage to pay, no one relying on me and I don’t really have anything to lose. 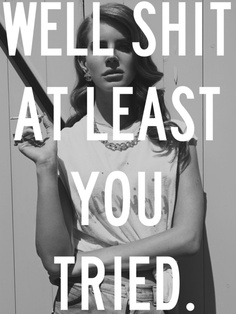 But, more importantly, I’m more scared about not trying.

I always remember my dad telling me that the years fly by and with each year you grow older the time goes even faster. I’m not worried about growing old but I am worried about being filled with regret and unfulfilled wishes. So like the lovely lady in this picture says, ‘at least I tried’.

[…] wrote a blog post about it, ‘I’m going freelance!’ and I was overwhelmed by the support and interest you guys […]

Good luck - I really hope it works out for you, you're really inspiring! I love that Jack Kerouac quote - it's so true. And like you say - you're young, no mortgage or responsibilities and I can't imagine anything worse than growing old and always thinking 'what if I had...' Go girl!! x

The 'what if I had...' thought pretty much inspires me to do everything! Thanks Victoria :)

Good for you! Can't wait to see the new blog!

It sounds like you already had a few ongoing gigs lined up which have meant you can take the leap into freelancing and still feel fairly secure? Would be great to hear more as you start up freelancing as to how you manage to maintain it, how to build relationships with companies which give you a little more security than just pitching every time etc.

So how'd the freelance work out for you? Been reading your blog with interest for a while now. Just starting out myself with my own travel blog, so I try to get as much information about what I'm up against, the successes and shortcomings that people encounter.

I hope your well Monica and still travelling safely! all the best /Wilfy

I'll be writing an update on freelancing soon Wilfys.I've been trying to write it for a while but things change and grow so quickly that I keep needing to edit it. Things are going really well. I love the freedom and creativity involved but it can also be stressful. The update post should be coming soon!

So how is it all going!?

I'll be writing an update soon but to cut a very long story short, it's going brilliantly! I'm very busy but I've found a great mix of busy travel weeks and chilled out weeks working from home and I love it.