At 6.30am I sleepily stumbled up the stairs and onto the roof of my hotel in Khajuraho for my early morning yoga session. India is such a chaotic place so it was eerie but beautiful to see the town when the streets were silent, there wasn’t a cloud in the sky, there was no tinny radio blaring out Hindi songs, there were no dogs barking or horns honking. I made a silent promise to myself that I’d make more of an effort to get up at this time of the morning and see the world before it wakes up. 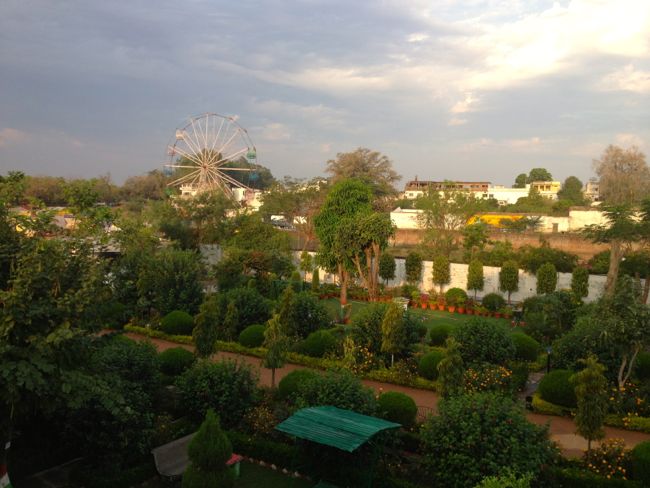 As I stood on the roof, looking down on the hotel courtyard, a small orchid and a flower garden, I saw a man dressed in white who appeared to be floating through the trees. He stopped occasionally to look up at the sun but otherwise strolled slowly with his hands clasped loosely behind his back. He looked like his walking on air.

I instantly knew that he must be the yoga teacher and stood watching him for a little while longer, captivated by this peaceful moment

He eventually joined me on the rooftop, 10 minutes late but I was trying my best to be a tranquil and chilled out yogi rather than a stressed out and punctual Londoner, so I pretended not to notice.  He still had the air of someone who had just stepped out of a dream and was all floaty and mystical. Maybe it was because the sun was rising and creating a soft orange light behind his back that made him glow but, in my memory, he’s become some kind of mythical man from the flower garden. 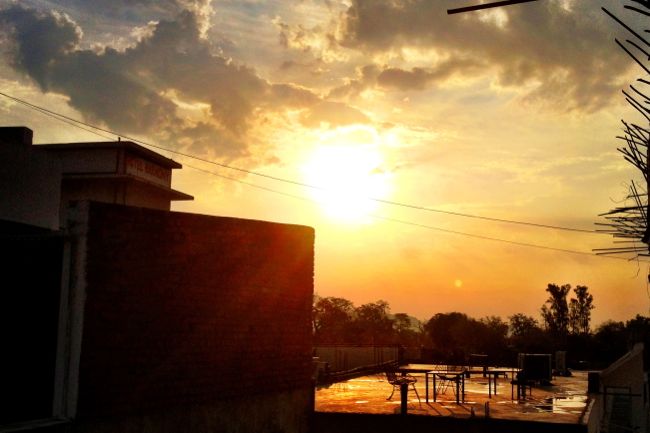 Sunrise on the rooftops

He handed me a rough picnic blanket to spread out across the concrete rooftop which was already beginning to warm up nicely. He introduced himself with a chuckle and I don’t think he stopped chuckling for the next hour and a half.

I was joined by a girl from Germany and he referred to us as ‘Germany’ and ‘England’ as he told us we needed to smile more or jump higher, stretch further, chant louder or laugh with more energy. Yes, he told us to laugh with energy!

For anyone who has been to a yoga class before, you’ll already know that this was unlike any Western yoga class. There were no sun salutations or tree poses or difficult stretches that you have to hold for 30 seconds while patting your head with one hand and rubbing your belly with another with one finger on your nose and one toe on your shoulder. No, this seemed like it was just plain fun.

I’d been excited about trying a yoga class in India, it is the home of yoga after all, but I’m also aware that our Western version of yoga is very different to how they traditionally practice in India. I’ll admit that I go to yoga classes to tone and strengthen on the days I’m feeling lazy and can’t face something as energetic as ‘Body Pump’ or ‘Body Combat’. I know that the meditative benefits can outweigh the physical benefits in yoga but I’m still not sure if I’m spiritual enough to appreciate them 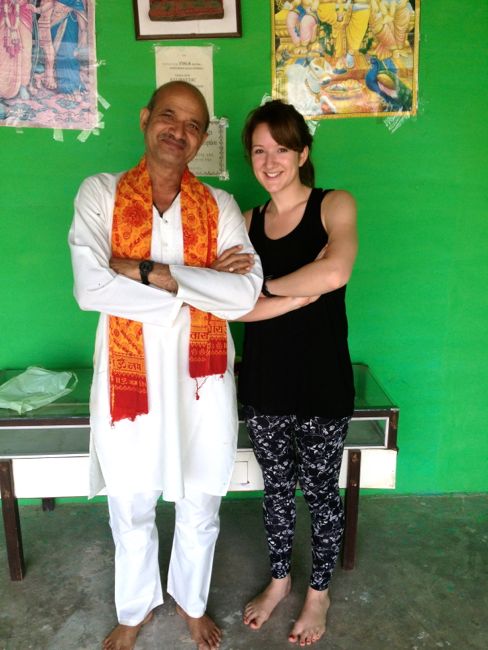 We began with some deep breathing exercises while our teacher told us all the benefits of yoga, some of which I’m still dubious about. I’ll admit that he did look 20 years younger than he claimed to be but I don’t understand how yoga can give you good teeth, shiny hair, and no brown spots or sun damage to the skin. He chuckled as he described his friends who don’t practice yoga and have potbellies, bad skin, rotting teeth and unhappy lives. We couldn’t help but laugh along with his crazy and infectious amusement.

Some of the exercises felt like a primary school PE class with star jumps and teddy bear rolls while some felt more like the yoga classes I’m used to with downward dogs and backbends. Some were more like a chill-out session as we lay on the roof and soaked up the rising sun and I’m pretty sure some were designed to simply make us laugh.

Towards the end of the class he began jumping up and down while bellowing, ‘Come on, laugh, laugh!’ I looked at the German girl who looked equally as uncomfortable as I felt.

‘Err, ha, ha, ha?’ I attempted awkwardly with a forced smile. Then I tried again. And again. And before I knew it I was doubled over in hysterics while belly laughing. Once I’d started I couldn’t stop and was wiping the tears from my cheeks.

It wasn’t long before the other guests in the hotel began to wake up and came out to investigate what the crazy people on the roof were doing. They began to follow along from their balconies when they heard our laughter and saw the silly exercises we were doing and it felt like the whole hotel was united in one crazy laughing game.

By the end of the 90 minutes I felt like I’d had just as much of a workout as I would in my normal yoga class but I spent the rest of day bursting into spontaneous giggles at the memory. It may not have been like my usual class but it sure was fun.

India: Tips for planning your holiday to Kerala

[…] Laughing yoga in India – Definitely recommended for a giggle […]

This sounds brilliant fun – and I'm going to be in Khajuraho in a couple of month's time. Can you remember the name of the teacher or tell me where you found the class? I'd love to try it!

I found the class through a poster on the wall in my hotel. I'm sure if you ask the receptionist at your hotel they'll be able to give you more details. Have fun!

Laughing is the best medicine you know and i think you are taking in the morning with yoga.. so keep enjoying tc ...

Amazing blog!! I dream someday get to travel as much as you do!! So lucky!!! Thank you for writing and inspiring so many because I am sure I am not the only one who feels inspired! :)