A road trip is my favourite way to discover a new destination. I love the freedom of the open road and that feeling as your soar through the countryside with the wind in your hair and your favourite song blasting through the car. I love stopping at road side cafes and every little gem that takes your fancy. I love stopping to take photos, admire the views and stumble upon places you didn’t even know existed.

I was really nervous my first time driving abroad so I want to share my tips for anyone else planning a road trip in a different country who might also feel a bit nervous about it too. I passed my driving test when I was 18 so I have no idea why I felt nervous after so many years on the road but I know I’m not alone!?

Sam and I road tripped around the entire coast of Australia, but Sam did the majority of the driving and I often only took over on the long, straight roads through the outback so this wasn’t scary at all! There were a lot of kangaroos but we could go for hours without seeing another car.

Road tripping around Europe isn’t quite as easy as you need to know your way around and have an idea of where you’re going, especially in the cities. I found driving in Canada to be pretty straight-forward, especially because the Canadians are so nice! 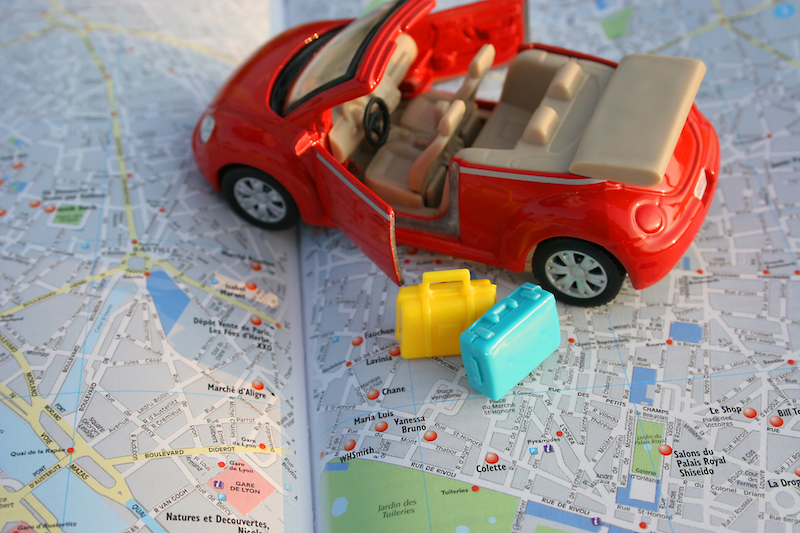 The first time I hired a car on my own I was terrified, but I was doing my best to pretend I was cool as a cucumber.

I was in Southern France and the guy at the car hire office handed me the keys and I strutted over to my car like I’d done this a million times before.

I slipped behind the wheel of the car and zoomed off without glancing back, hoping I’d managed to fool everyone into thinking I was cool with this. But what I failed to do was figure out how to use the lights, indicators, the radio or GPS. Half a mile down the road and I was flapping around as I tried to figure all this out while driving on the ‘wrong side of the road’ with the radio on full blast and no idea how to turn the volume down or even how to indicate. The fans were blasting out hot air so I was quickly becoming a flustered, sweaty mess. I couldn’t figure out how to use my GPS because it was in French (obviously!) and because my French is terrible I couldn’t change it over to English.

So…yea…that was a difficult trip!

I wish I’d just told the man behind the car hire desk I didn’t know how to use the car and asked him to show me how!

Read more: A hassle-free guide to hiring a car abroad

Driving on the other side of the road isn’t difficult

The thing I was most scared about was driving on the ‘wrong side of the road’ but I shouldn’t have been worried about this at all. OK, it was weird for the first 15 minutes but I quickly got used to it.

If possible, stick to motorways at first. I wouldn’t recommend heading straight to the winding country lanes like I did. I’ll admit, I did clip a few trees and bushes as I passed!

Side note: If you’re looking for a cool job that allows you to travel then why not commercial driving? You’ll need to do a CDL test and be a confident driver. Take a look at Zutobi’s CDL practice test here.

If you drive an automatic at home then make sure you book one in your destination. You’ve got enough to think about without relearning how to drive a manual!

Make sure your GPS displays the speed limit

On our second trip to France last year we ended up with a speeding fine, purely because we didn’t know what the speed limit was. When the roads are quiet it can be difficult to tell so use your GPS (even if you know where you’re going) to display the speed limit. You’ve got no excuses then!

Find car parks online before you set off (especially in cities)

The thing I find most stressful about driving in unknown cities is finding a place to park. Have you ever tried to parallel park in an unfamiliar car while a group of French blokes stand on the curb and watch you? Yea, that was uncomfortable!

When I took my road trip to Southern France last summer this really stressed me out! I’d approach a city and my GPS would abandon me as the lady inside would happily declare, ‘You have reached your destination’.

Argh, I might have reached my destination but where do I go now!?

(Note: This particular GPS was useless and could only roughly get me within a one mile vicinity of where I wanted to be!)

I’d try to find a car park and I’d be following a sign that looked like it might lead to one but was actually just taking me in circles around the city. Then I’d spot something that vaguely resembled a car park but couldn’t find the entrance. Then I’d spot an entrance but I’d be in the wrong lane and there’d be cars all around me and….oh jeeze…I’m actually getting stressed just thinking about this memory!

So now I always check Google Maps before I leave to figure out which carpark I want to be in. Just zoom in on the map and you can clearly see where all the carparks are.

Read more: How to really use Google Maps while you travel 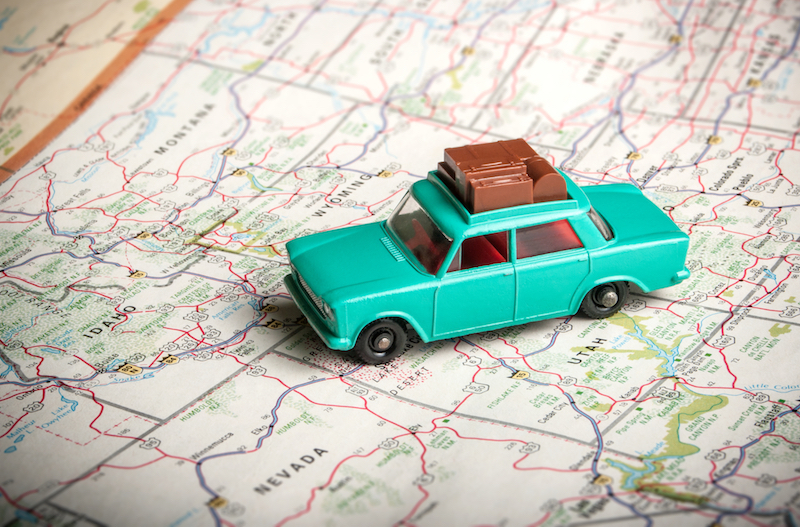 Know what to do when you get to toll roads

We don’t have many toll roads here in the UK so it’s understandable that we Brits often panic a bit when we get to one. What do you do? Which lane do you go in!? Do I need a badge? How do I pay? Do I need change?

Make sure you’ve got this figured out before you arrive at a toll booth and you’re not that person holding up the queues. If you’re hiring a car they can usually help you out here. But if not, have a contactless card handy as this is usually the easiest way to pay.

I know, I know. You’re on holiday and you want to have a lazy lie in. Yes, me too. But if you get up early and begin your road trip just after sunrise you will have the roads to yourself for a few hours and you’ll have beautiful, serene early morning views.

Pay attention to the rules of the road

And by ‘rules of the road’ I don’t mean the actual laws, I mean the unspoken rules that are common for that destination. In Canada and Australia for example, it’s common to undertake on the motorway. But in the UK we never undertake (it might even be illegal!?) If you aren’t aware of this, it can be quite dangerous as you might not be looking out for a car overtaking you in the outside lane.

Be cautious and pay attention to these unwritten rules until you’ve got it figured out. 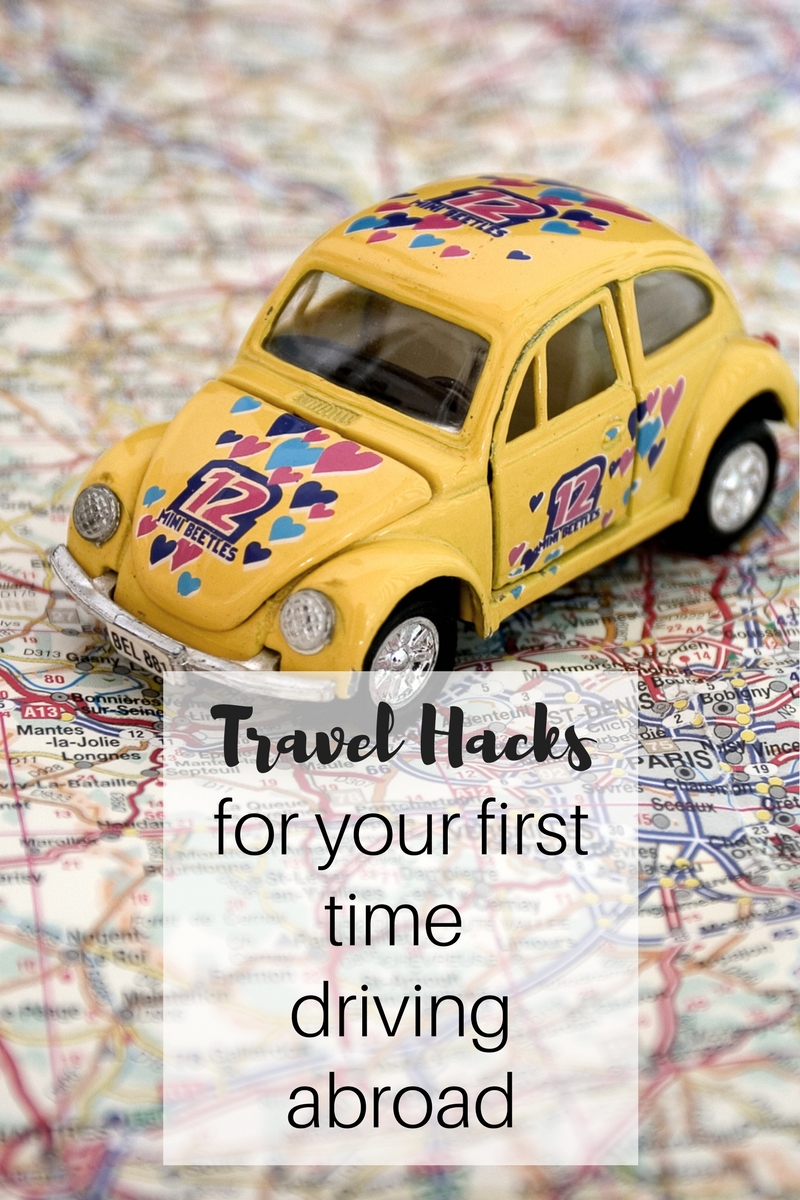 Do you have any more tips to add to the list for anyone driving abroad for the first time?

I feel your pain with French men watching you parallel park. The worst thing about parallel parking is the witnesses!!

It's illegal to undertake in Australia as well, but since everyone here thinks it's their right to drive in the right hand lane, no matter what speed they are doing, or if there is even anyone else on the road to overtake, there is no other option but to undertake!