As well as being incredibly cool, Lisbon is also beautifully photogenic and totally Instagramable. The city is built on seven hills which means there are more than a few panoramic viewpoints. Ancient districts are packed with steep cobblestone streets, gorgeous Azulejo tiles and street art. Camera in hand, you’ll be drawn to the sleek lines of contemporary buildings which contrast with crumbling facades and pastel paintwork. In fact, you’ll find ‘gram candy around every corner so, grab your selfie-stick and your sun-hat and let me show you Lisbon’s top ten Instagram-worthy spots. 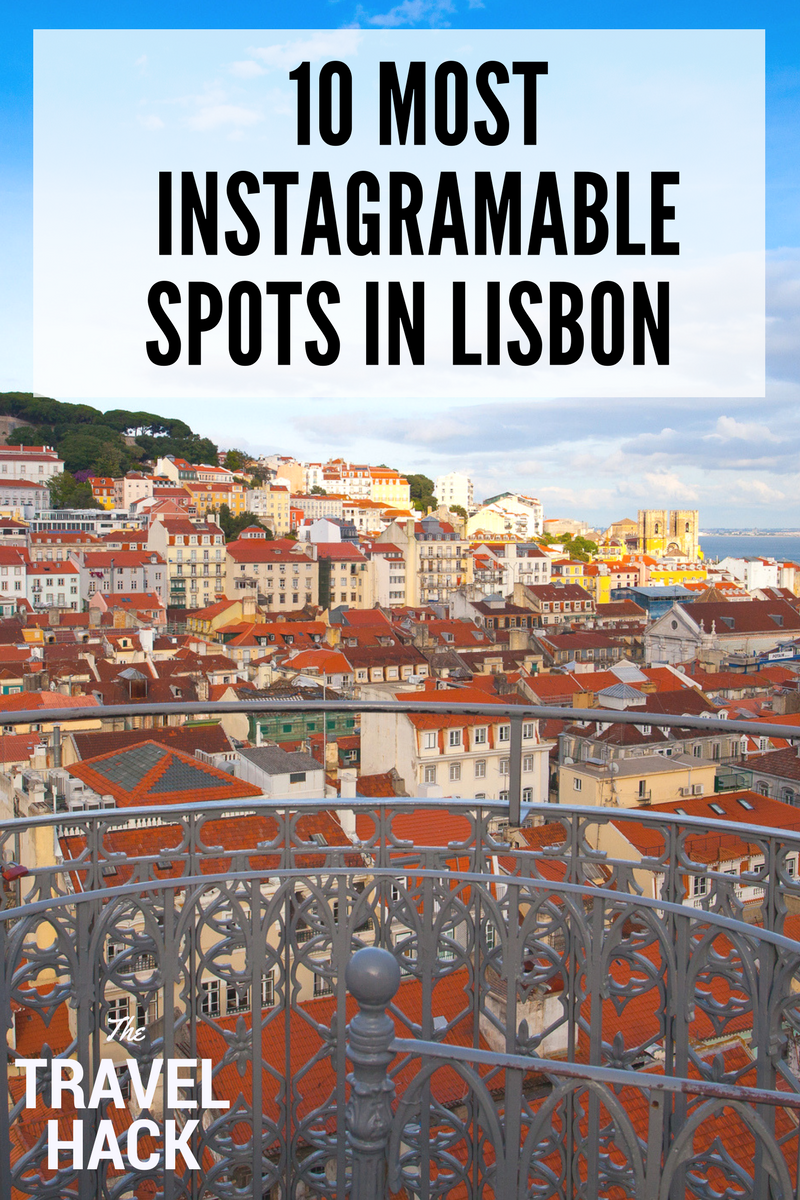 This is probably Lisbon’s most photographed street. It’s where the Bica funicular, a national monument, has trundled up and down the steepest of streets since 1892. The street is lined with small 17th and 18th century buildings with flower-filled verandas. Go to the top to shoot the two sunshine yellow funiculars as they pass each other. The Tagus River in the background makes the perfect backdrop. 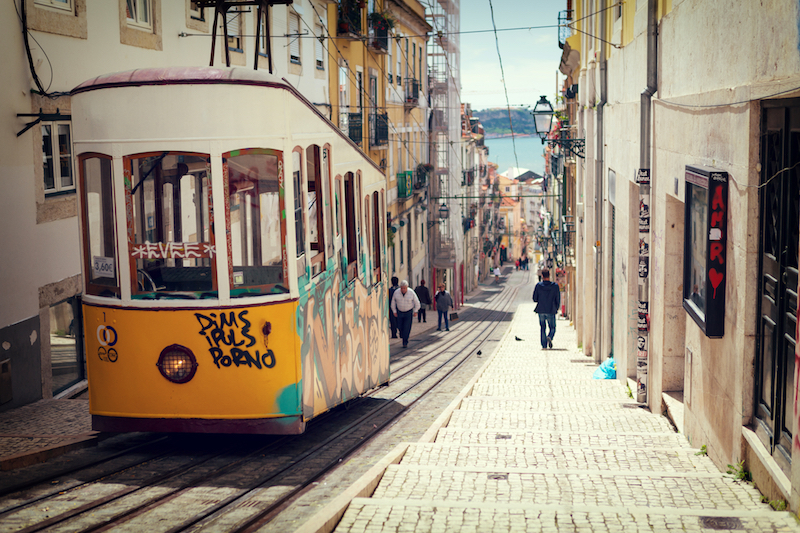 The Museum of Art, Architecture and Technology (MAAT)

MAAT is a repurposed power station on the banks of the Tagus River in Belém which opened in 2016. The shell-shaped contemporary building has beautiful wave-like lines and gentle arches. Visitors can walk over the curved roof and down an outside staircase that descends into the water. Glazed tiles on the façade reflect water, light and shadow. Go in the golden hour when the setting sun turns the building gold for ‘that shot’.

Where: Belém – over the road from the monastery 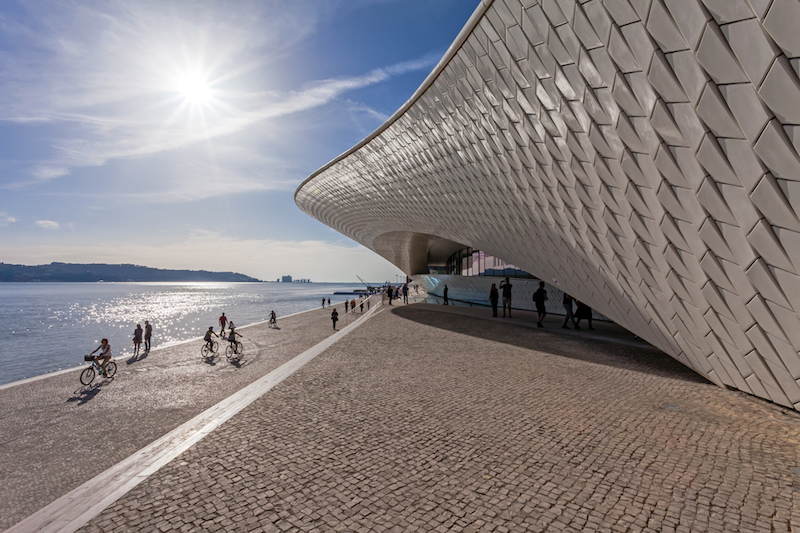 A short walk from MAAT is Belém Tower. The castellated tower is over 500 years old was built in the 16th century to protect Lisbon from invaders who tried to sneak up the river. The setting, near the mouth of the Tagus River, is gorgeous and on sunny days the sunlight reflecting from the water seems to make the white tower glow. Add to that a backdrop of blue sky and fluffy white clouds and you’re sure to get yourself a few new IG followers when you post this one! 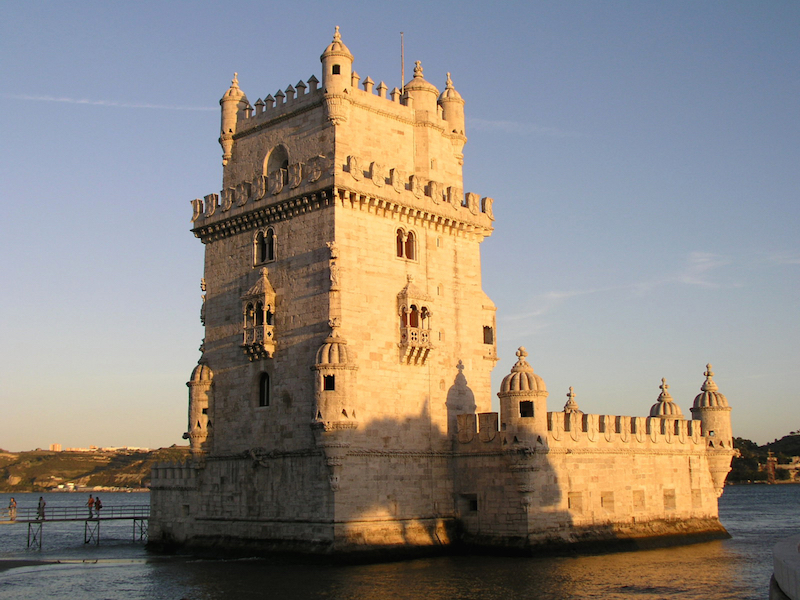 Praça do Comércio is Lisbon’s largest city square and was originally built as a welcoming point for visitors arriving from the Tagus River. The beautiful square is lined on two sides with porticoes. On the third side is Rua Augusta arch which was built to commemorate the city’s reconstruction after the 1755 earthquake. The arch, which is adorned with statues, is over 100-foot high and leads through to Lisbon’s main pedestrian street.  Daffodil yellow paintwork each side of the arch contrasts nicely with the city’s yellow trams which stop opposite making for a great Instagram shot. The square is usually packed so you’ll need to get there early for the best shots. 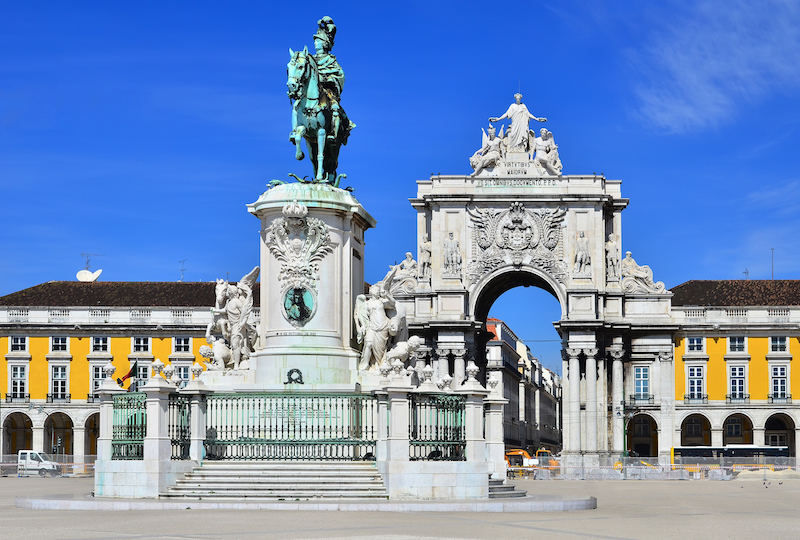 Calçada Portuguesa are the Portuguese black and white mosaics that decorate many of the city’s pavements and squares. If you head up Augusta Arch to the viewing platform you’ll get a great view of the patterns decorating the pedestrian street below. Rossio Square is also a good example where the wave pattern seems to create the illusion that the floor is moving. Look out for the wonderfully ornate train station on the square which is also worth a shot or two. 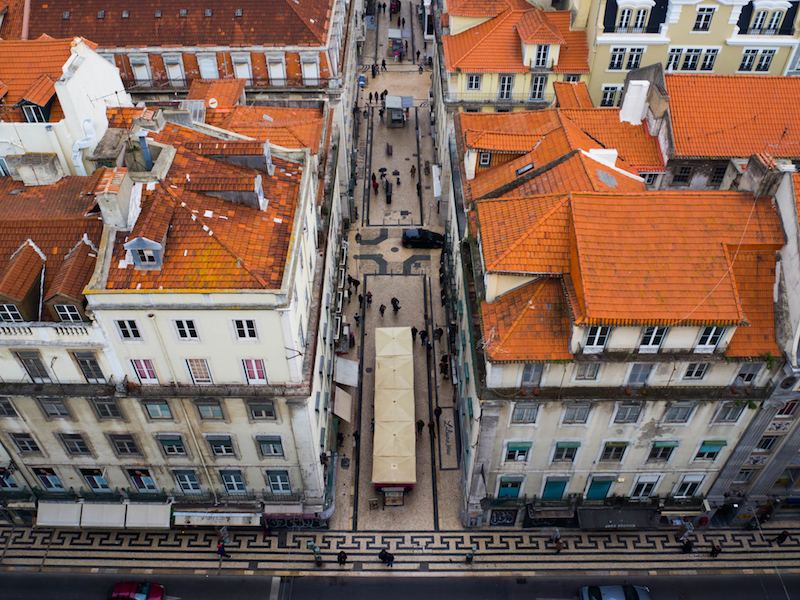 Santa Justa Elevador aka the Carmo lift is a neo-gothic elevator built by a student of Gustav Eiffel and it’s quirkily gorgeous. The 147-foot wrought iron tower makes for a great shot be it from outside at street level, inside from the top, in daylight or when it’s all lit up pretty at night. When you get to the top head up the spiral staircase to the viewing platform for Instagramable views of the city.

Where: On Rua Augusta, the pedestrian street. 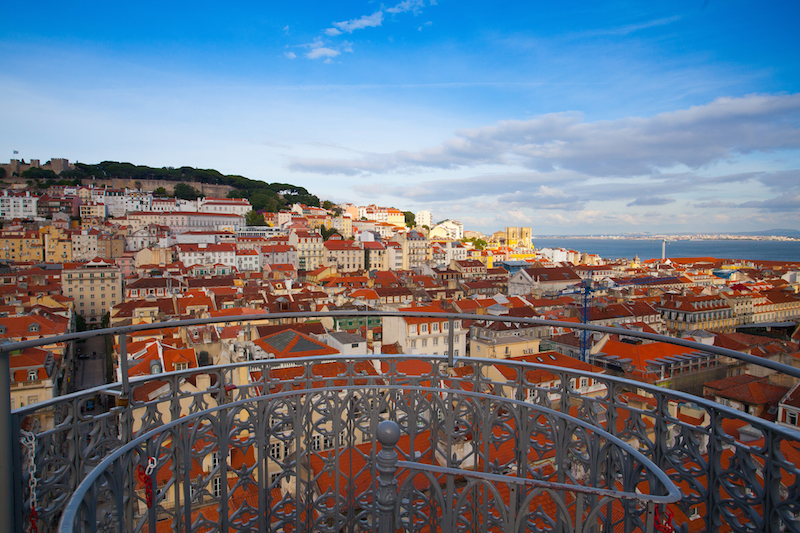 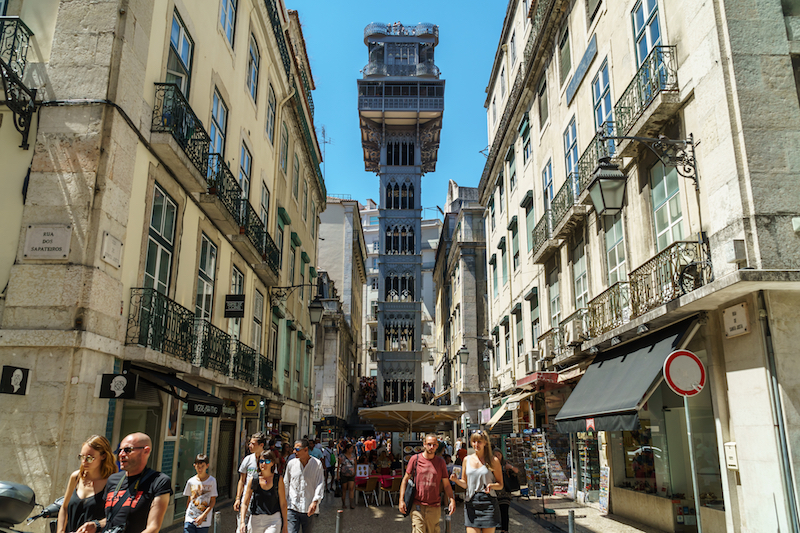 Just by the top of Santa Justa Elevator you’ll find the atmospheric Carmo Convent. It’s the shell of a huge church that was destroyed by the 1755 earthquake but it’s a pretty impressive shell. Looking down the nave you’ll get a stunning perspective of arches and pillars reaching up into a cobalt blue sky (on a good day). Around sunset the white stonework takes on a gorgeous golden glow and makes a beautiful backdrop for a selfie or two. 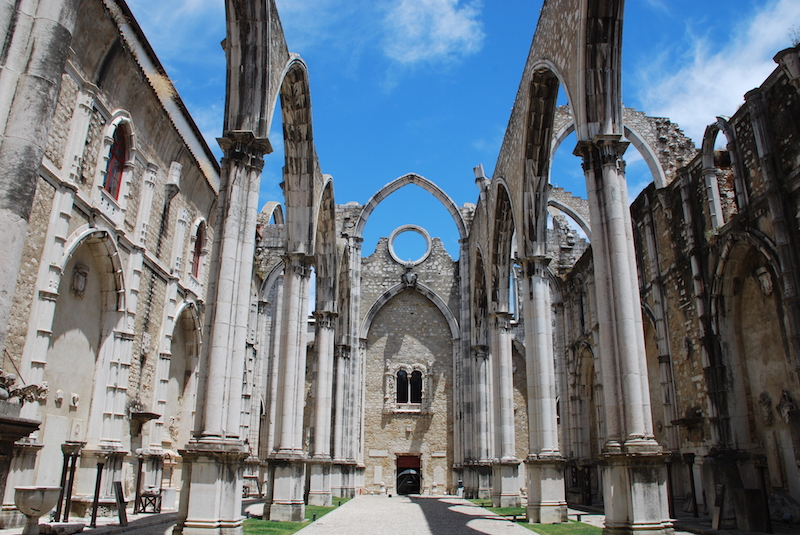 Virtually everywhere you look in Alfama is Instagram heaven and you could snap away to eternity in this gorgeous Lisbon district. Alfama is one of the city’s oldest neighbourhoods and you’ll find every kind of photo op here, each more beautiful than the last. Pastel painted walls, steep steps disappearing into crumbling arches, terracotta rooftops and laundry billowing in the Lisbon breeze can be found around every corner. 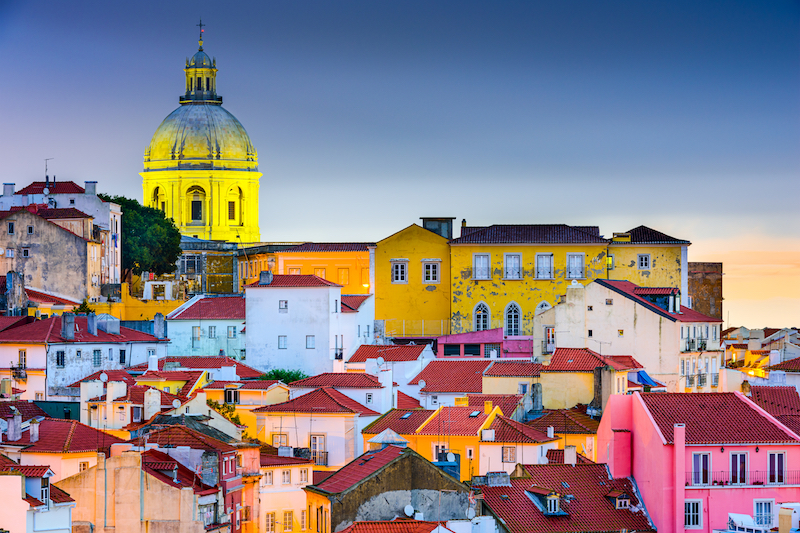 One of the things I love about Lisbon are the tiles. Brightly coloured Azulejo tiles with intricate designs and patterns can be found all over the city and they make the perfect selfie backdrop. Bairo Alto and Chiado districts have good tile spotting potential. I like the geometric patterns with Moorish influences the best but there are all types of tiles from blue and white patterns to large murals made from hundreds of tiles. 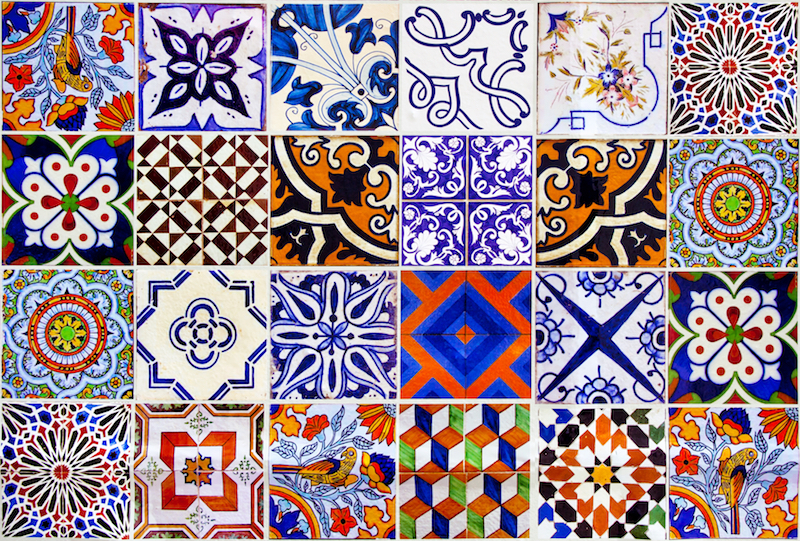 There are some stunning views of the city from Lisbon’s seven hills. The viewpoints are known as Miradouras and they’re all highly Instagram-worthy.  I like the highest the best. Miradouro da Senhora do Monte has the biggest and best view over the city’s rooftops to the castle and out towards the Tagus River. You can see Santa Justa Elevador, Christ the King Statue and the 25 de Abril Bridge, which looks remarkably like San Francisco’s Golden Gate Bridge. Being the highest viewpoint you’ll need to climb the highest hill to get to it. Or you could take tram 28 which stops on nearby Rua da Graça. 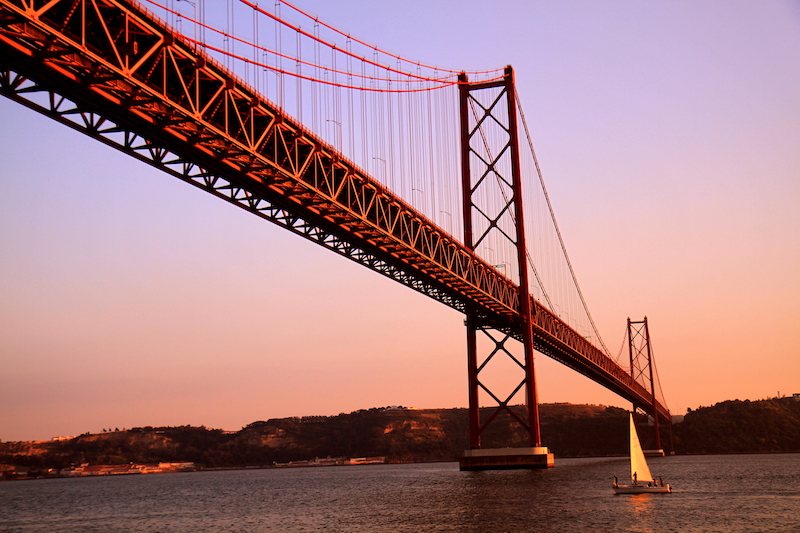 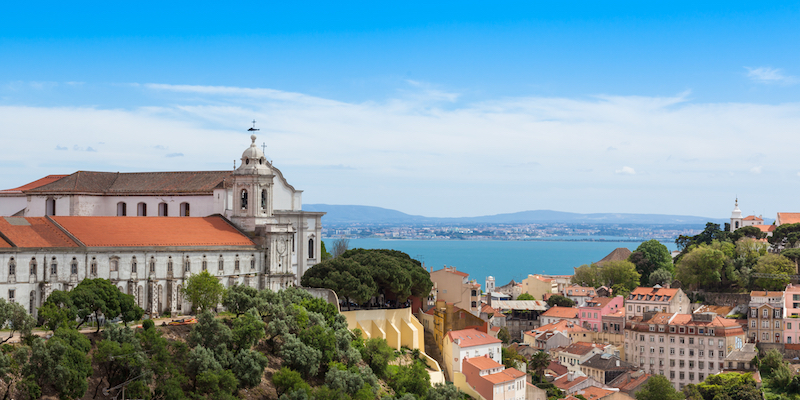 These are some of my favourite Lisbon Instagram spots and I haven’t even touched on Sintra, town of brightly coloured castles and palaces yet. What’s your favourite Instagramable city? 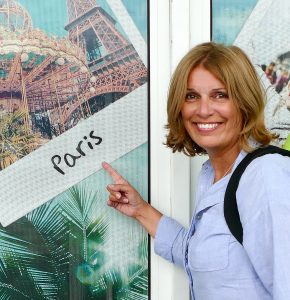 [/one_half][one_half_last]This article was written by the brilliant blogger Suzanne Jones, aka The Travelbunny. Suzanne is a serial traveller constantly on the search for adventure, wildlife and the next culinary encounter. When she’s not travelling and blogging at The Travelbunny Suzanne loves trying to recreate favourite dishes from her travels, long coastal walks and photography. Suzanne lives on the south coast near Brighton and can’t bear to be too far away from the sea.[/one_half_last] 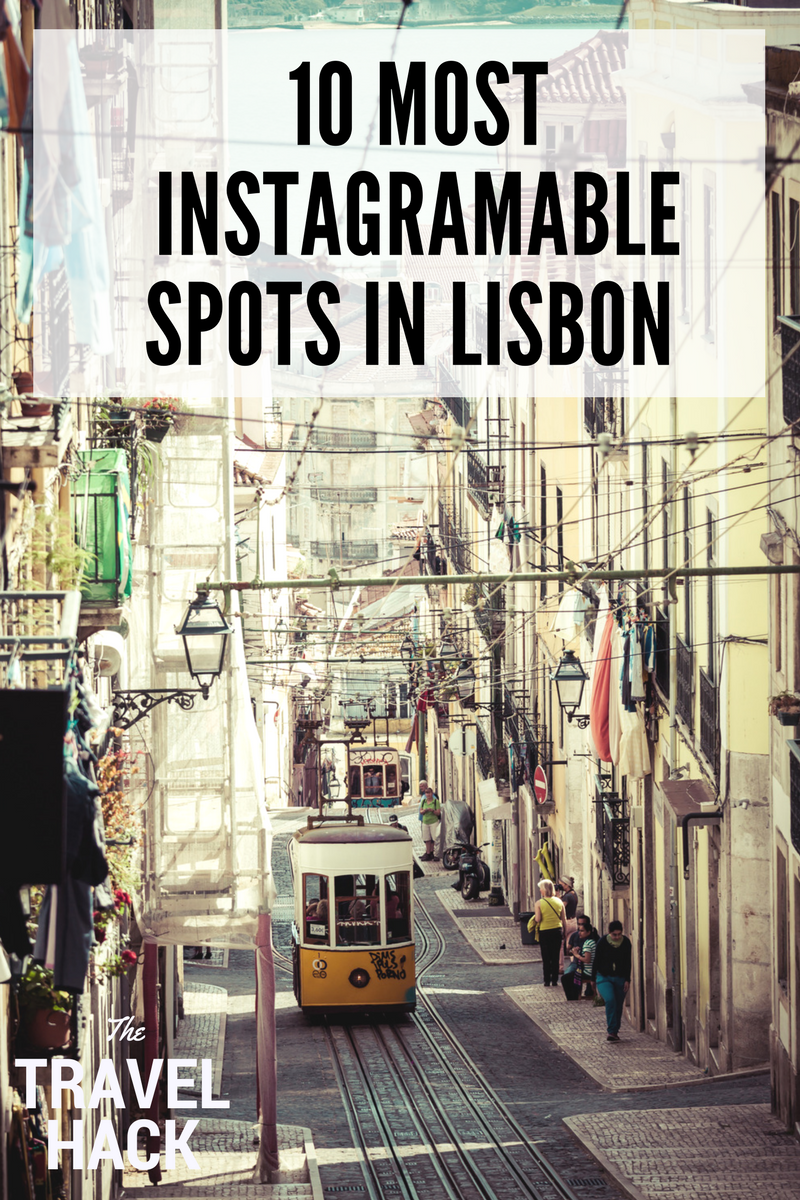 A beginner’s guide to Lisbon: 10 things to do in Lisbon during your first trip

10 photography apps you need for your travel photos

Thank a lot for sharing such a great info about LISBON. Now am Planing to visit LISBON this summer-2019.

A Weekend Itinerary for Lisbon, Portugal

Didn't have time to fit in MAAT on my recent visit to Lisbon and Cascais. Next time! :) :)